In a feature first published in PUSB, writer Rob Mason investigates international players who represented their country while on Coventry’s books - this time it's the legendary Tommy Hutchison!

Tommy Hutchison is one of Coventry’s best ever players. He was also one of Blackpool’s and is a member of the Hall of Fame of both clubs. He won 17 full caps for Scotland, all of them while with the Sky Blues.

Now 72, Tommy was born in Cardenden. It is a tiny place in Fife but as well as Hutchison, Rangers Hall of Fame member Willie Mathieson was also born there as was the novelist Ian Rankin. It was with Cardenden’s local club Dundonald Bluebell that Tommy began his football career. Having given his father Jock, a miner, the Scotland shirt from his debut, when his dad died Hutchison donated that top to his first club.

Tommy’s international debut was described as ‘The best debut I’ve ever seen’ by Scotland manager Willie Ormond. There was a sell-out 100,000 inside Hampden Park to see it. Excitement was at fever-pitch. A win for the Scots would see them reach the World Cup finals for the first time in four tournaments. Goals from future Coventry defender Jim Holton and current day Sky Blues striker Colin Stein saw the Scots come from behind to win 2-1.

The following month Hutchison retained his place for the return match in Bratislava and started the next four internationals, facing West Germany home and away, Northern Ireland and Wales. Having been benched for a 2-0 win over England Tommy returned as a late sub against Belgium in Bruges and started in a victory over Norway in Oslo in the final World Cup warm-up. Apparently Tommy had been so disappointed to miss the England match he had contemplated not being part of the World Cup squad only to be talked out of such thoughts by the great Denis Law.

The Scots were unbeaten at the World Cup where Hutchison appeared twice as a sub. Tommy missing out may seem surprising but when you consider that the forwards available included Kenny Dalglish, Denis Law, Jimmy Johnstone, Peter Lorimer, Willie Morgan and Joe Jordan it illustrates the strength of the Scots at the time. 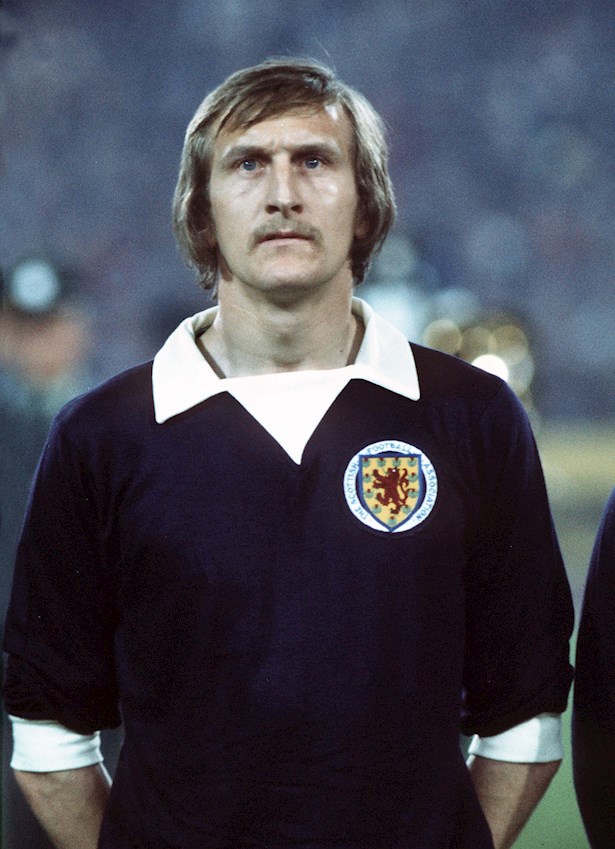 Hutchison came off the bench to replace Dalglish in a 2-0 win over Zaire in Dortmund and a 1-1 draw with Yugoslavia in Frankfurt, where his low cross created a late equaliser for Joe Jordan. With every team in the group beating Zaire and every other match drawn elimination came down to how many goals Zaire had been beaten by. The Scots had played the Africans first and won 2-0, Yugoslavia put nine past them without reply and Brazil cruised through 3-0.

At least Hutchison had the consolation of scoring what would be his only international goal on his next appearance – a penalty that opened the scoring in a 3-0 Friendly win over East Germany at Hampden. Tommy would however miss the second and last spot-kick he took for his country, against Spain. 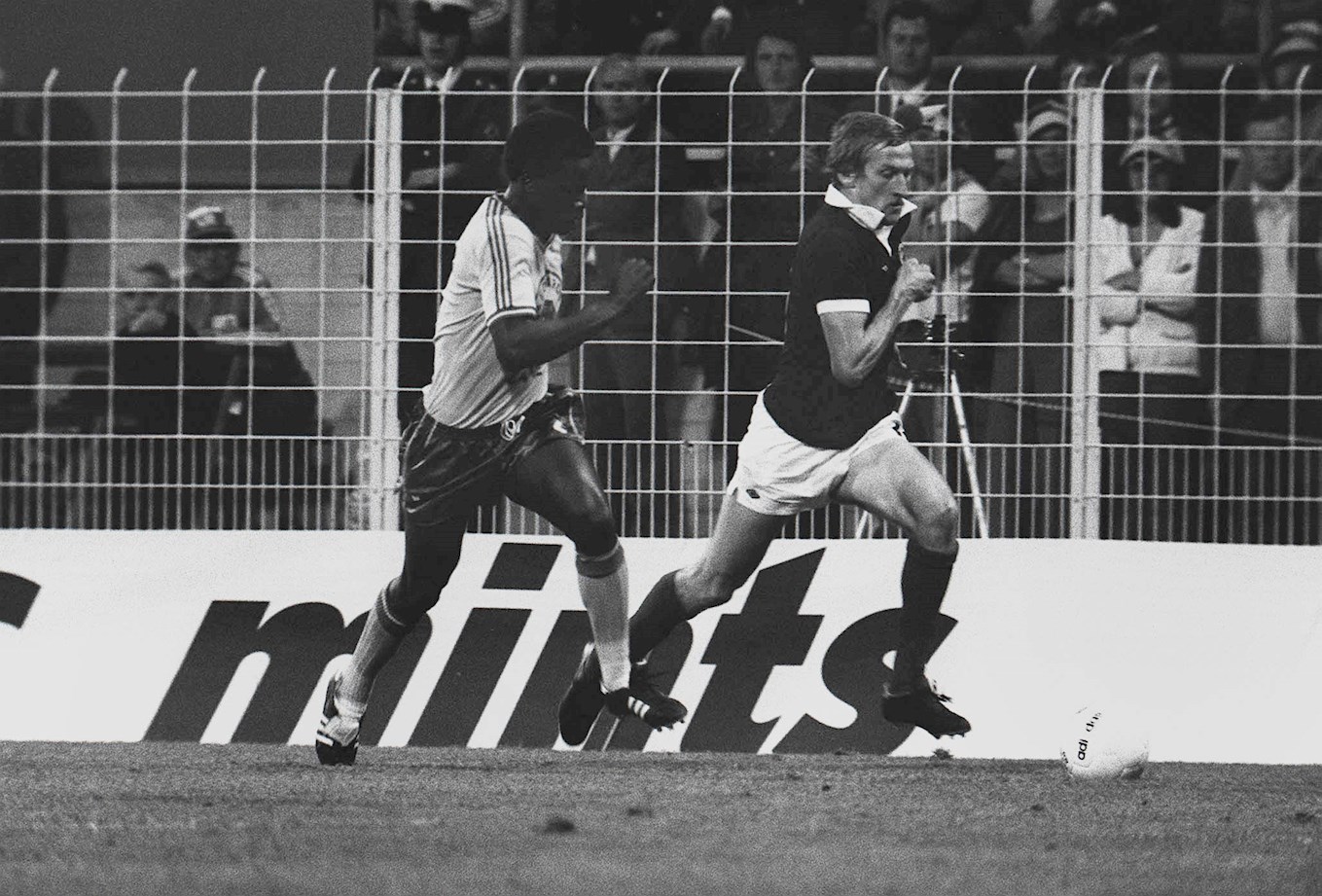 He started home and away against Spain and at home to Portugal in 1974-75 before coming off the bench at Wembley at the end of the season as England beat a team bereft of several of those aging big names 5-1. A week later Tommy again appeared as a sub as Scotland opened their European Championships qualifying campaign with a draw against Romania in Bucharest. The Scots didn’t play again until September, another qualifying match this time against Denmark. It was 44 years ago this week that Hutchison was substituted in a 1-0 defeat in Copenhagen. That was to be the last of his 17 caps.

He was a couple of weeks shy of his 28th birthday. Incredibly he kept playing for almost another two decades – becoming the oldest player to appear in European club competition when he played for Welsh Cup winners Swansea. Tommy appeared against Greek former European Cup finalists Panathinaikos in the European Cup-winners’ Cup 30 years ago this month, the two legs coming either side of his 42nd birthday.

Hutchison actually played until he was 46, the final three years with Merthyr Tydfil. Exactly 800 of his career total of over 1,000 games were in the Football League. In all competitions he played just over 350 times for Coventry and almost 200 for Blackpool. 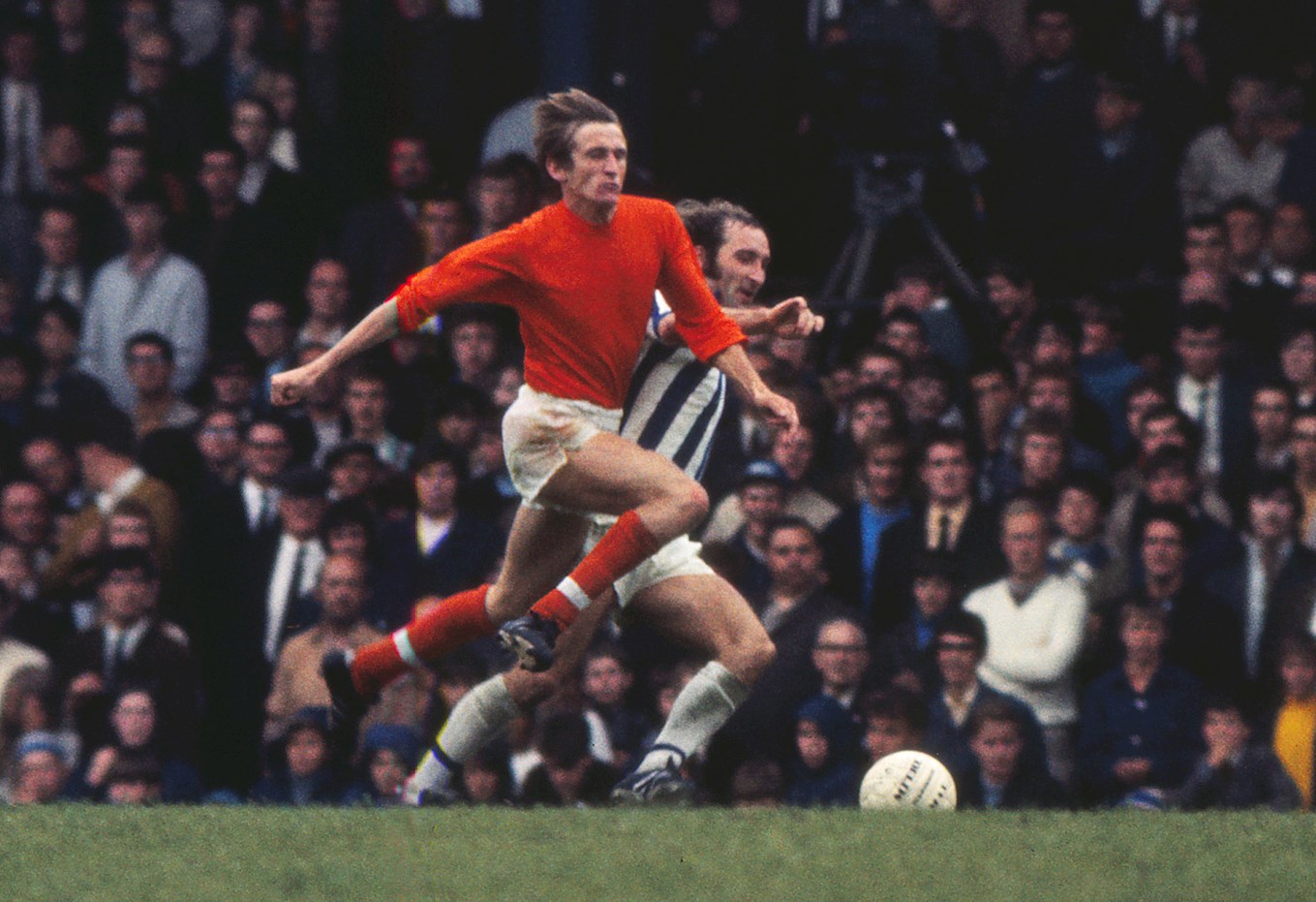 Even more incredibly, when he was a boy the man who played at a World Cup and scored in an FA Cup final couldn’t get into his school team! “My crosses couldn’t reach the box” he explained to the Scotsman newspaper. At Cardenden Denend Primary School one of his teachers was the auntie of John Thomson the Scottish international Celtic goalkeeper who died during a match in 1931. She had his yellow jersey in her classroom. When Tommy got to Auchterderran High (Secondary) school he found the star of the school team was Willie Johnston.

Then known as Billy, Johnston was just under a year older than Hutchison. Although born in Glasgow he had moved to Cardenden as a boy. He went on to be a massive star, scoring twice in the 1972 European Cup-Winners’ Cup final as Rangers won the trophy when Johnston was a team-mate of Stein. Later the same year WBA paid a club record fee to take Johnston to the Hawthorns and he was still with the club when he went to the 1978 World Cup in Argentina – only to be sensationally sent home after failing a drugs test.

As schoolboys Johnston had once borrowed Hutchison’s bike and smashed it by throwing it under a bus. The World Cup disgrace was a much greater misdemeanour. Tommy was not part of Ally McLeod’s World Cup squad and was long gone from the international scene. Nonetheless he was still excelling for the Sky Blues, having played 40 top-flight games in the season leading up to the World Cup. 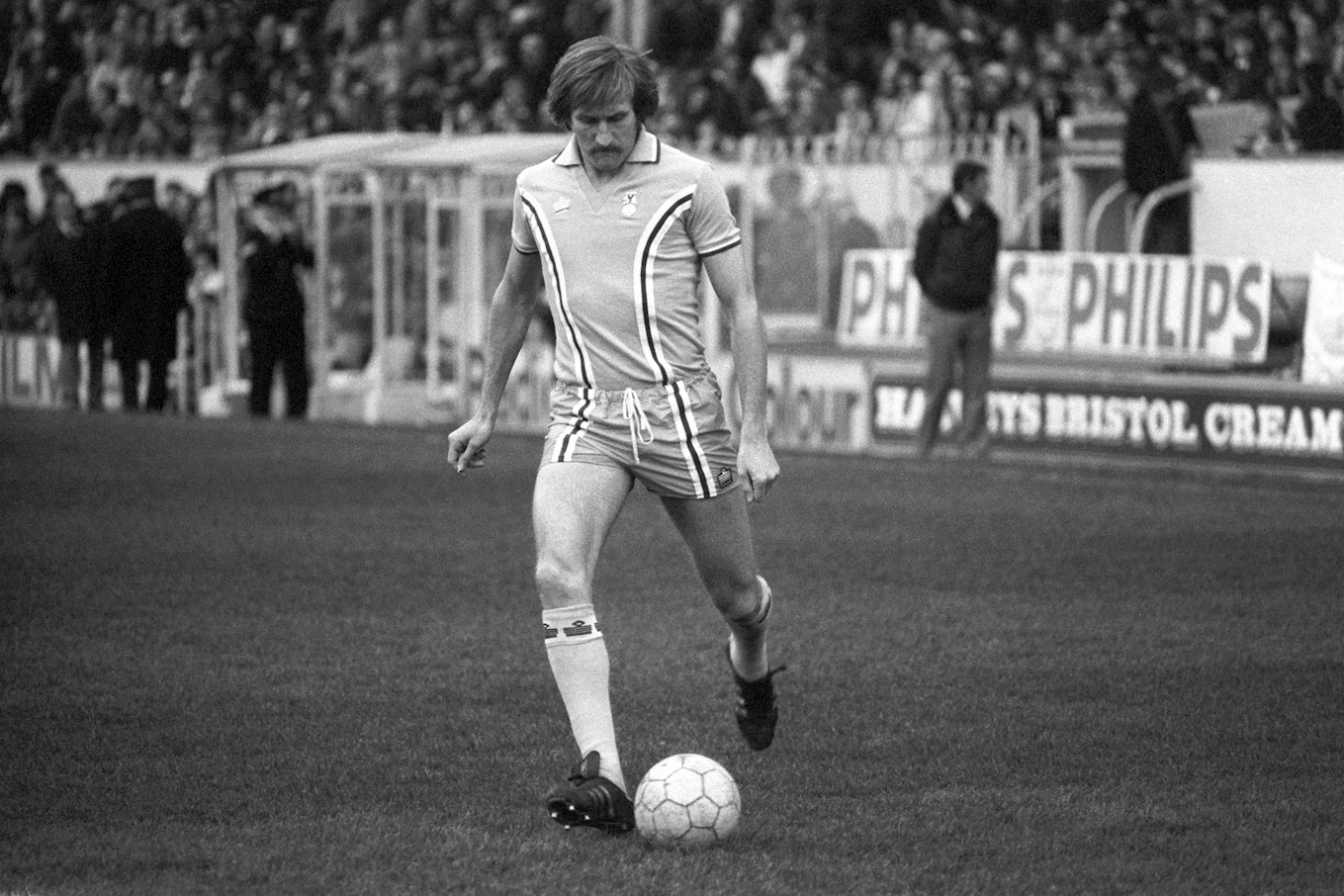 That City were in the top-flight at all was partly down to Tommy. Never a frequent goal-scorer (He scored around one goal for every 11 games) Hutchison scored both goals in the infamous game with Bristol City that kept both clubs up the previous summer. While Tommy didn’t score many goals some of those he did score were unforgettable, none more so than a shot from the edge of the box against Liverpool that took Coventry joint top of an embryonic table on a Tuesday night in August 1973 and a wonderfully mazy dribble that sealed a win at Arsenal in November 1972. Six months before that goal at Highbury Tommy had scored a very similar goal in the Tangerine of Blackpool against Portsmouth.

Hutchison created many more than he scored. He could leave defenders in his wake looking like a discarded set of bagpipes. One man he especially tortured was current Southend manager Kevin Bond in a game against Norwich for Coventry. That display helped to convince Bond’s dad John to sign Tommy for Manchester City in October 1980.  Hutchison had signed off at Highfield Road with a goal on his last home appearance against Brighton earlier that month.

Less than a fortnight before, Tommy had scored against the same team in the League Cup but fortunately the FA Cup third round hadn’t come around yet otherwise he could have been cup-tied. Tommy wrote his name into the record books in that season’s FA Cup final, scoring both goals in a 1-1 draw with Spurs. While his Sky Blues fans would have been disappointed for Tommy to score an own-goal in a 1980s FA Cup final with Spurs, by the end of the decade own goals in FA Cup finals with Spurs were much more popular in Coventry! 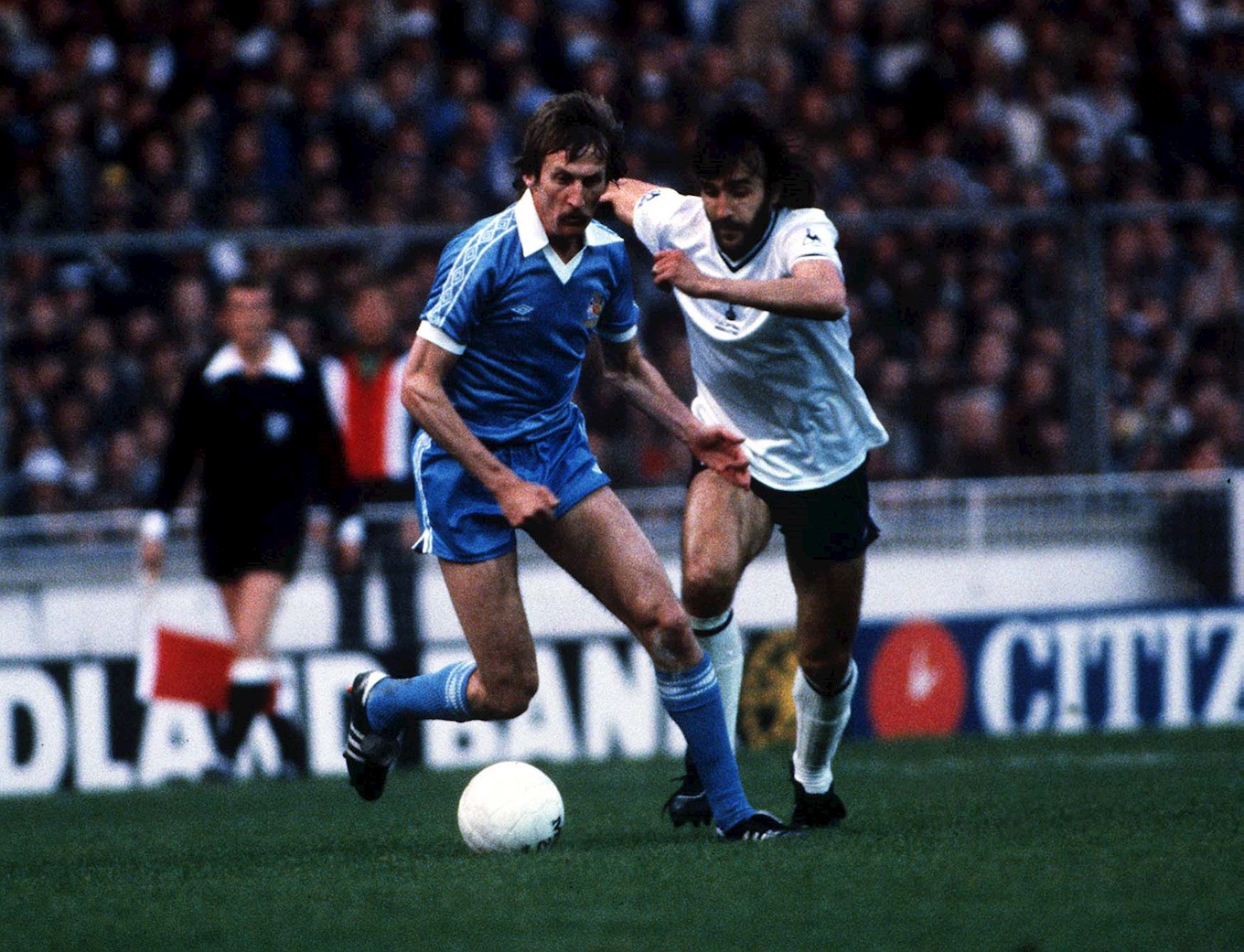 A year after his cup-final exploits Tommy tried his luck abroad, signing for Bulova in Hong Kong where he won two trophies in 12 months. He had already played overseas, on loan to Seattle Sounders while with Coventry. Always dapper in appearance – something he attributed to Bob Stokoe who managed him at Blackpool – Tommy became known as ‘Mr Gentleman’ in Hong Kong due to always wearing a suit when other players showed up in casual gear.

Mr. Gentleman had a year in the Far East but when John Bond took over at Burnley he quickly made Tommy his first signing. Questions were asked by Clarets fans as Hutchison was a month short of his 35th birthday and deposed Turf Moor legend Martin Dobson as skipper. Thoughts that Tommy was finished were very wide of the mark. Not only would he keep playing for several years but he was ever present in both of his seasons with Burnley, playing in a total of 114 games in all competitions in two years!

Although he was the Clarets’ Player of the Year in his second season he couldn’t stop them being relegated to the fourth division under John Benson. It had been expected that Tommy would take over from Benson but when the club appointed former Manchester United man Martin Buchan Hutchison was off, turning down the offer of becoming assistant manager. 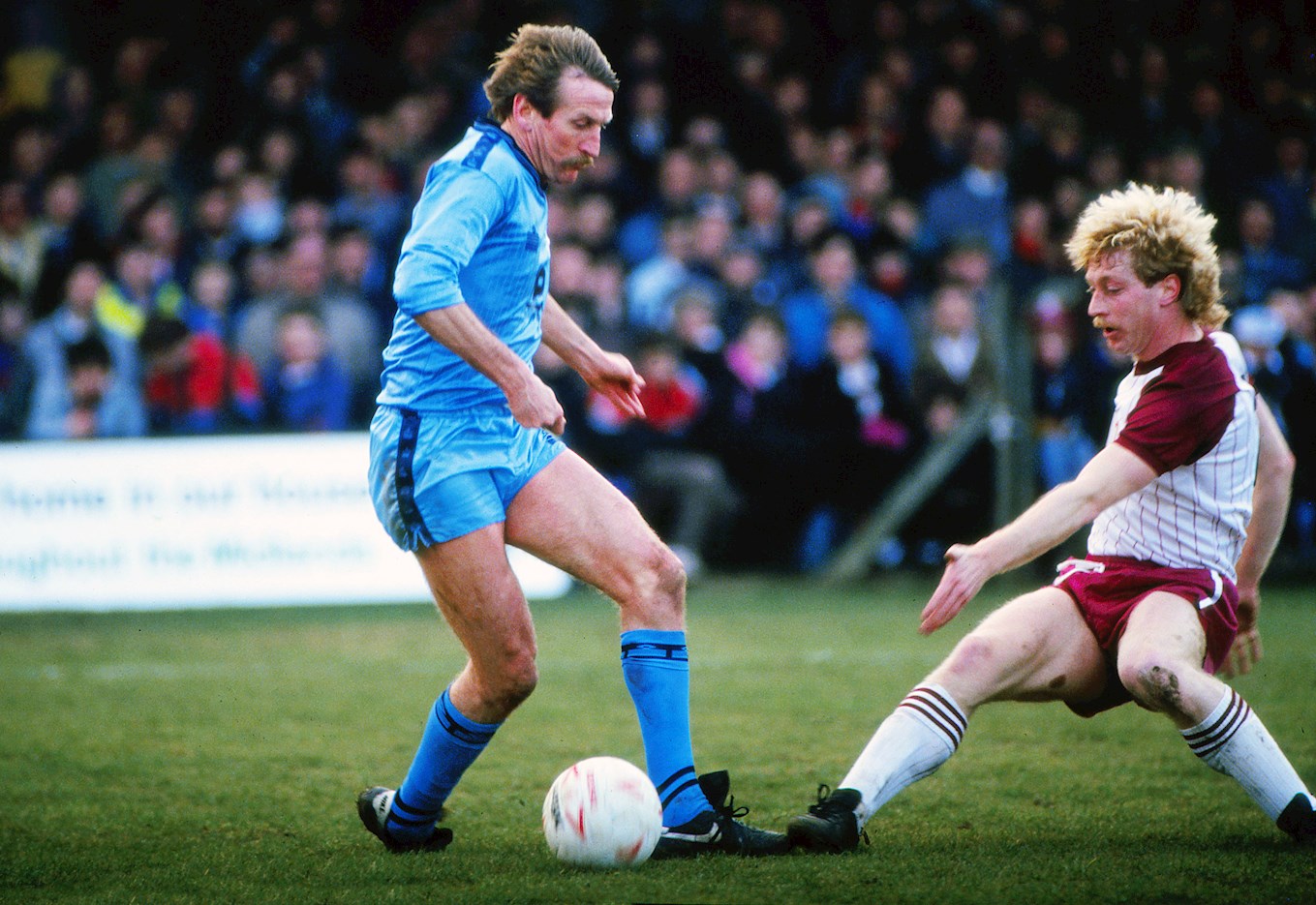 Instead he signed for Swansea, lured there once again by John Bond who was totally undeterred by Tommy’s birth certificate indicating he was 37 and 10 months. Having been passed over as Burnley boss Tommy took over at Swansea for the last five months of his first season of 1985-86 but was unable to stop the Swans from suffering the same fate as Burnley and dropping into the bottom tier. Relinquishing the managerial responsibility, he focussed on just playing and won promotion via play-offs in 1987-88. Tommy’s final match in the league didn’t come until March 1991 when he was aged 43, five months and 19 days.

He then went to Southern League side Merthyr Tydfil, spending three seasons there before finally hanging up his boots in 1994. 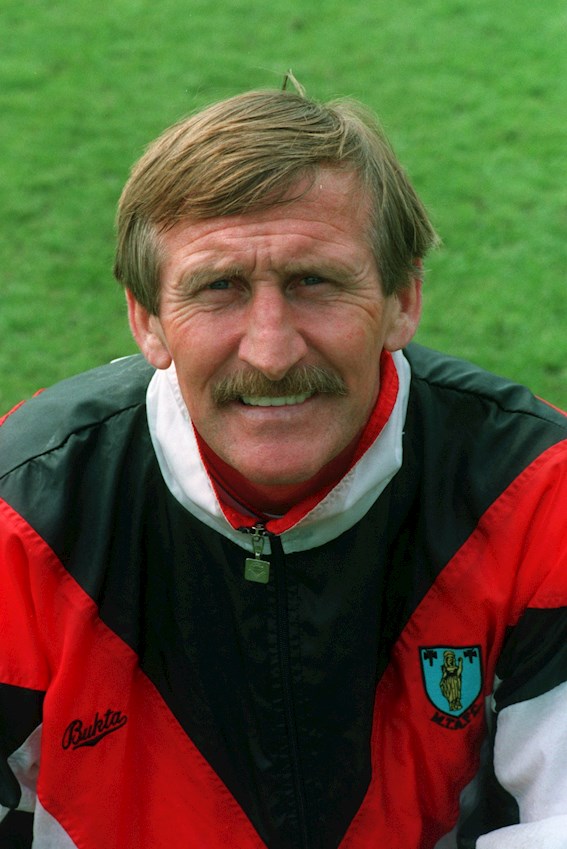 Astonishingly Tommy appeared in the Football League in four different decades. It had been March 1968 when he had debuted for Blackpool where he had been signed by 1953 FA Cup final hat-trick hero Stan Mortensen. The Seasiders won eight of the nine games Tommy played in the run in but missed out on promotion to the top flight on goal average to QPR who had beaten them in the game before Tommy signed.

Promotion did come his way in his second full season only for relegation to immediately follow – accompanied by the winning of the Anglo-Italian Cup with Tommy playing his part in the final in Bologna. He would also play in the following season’s final, lost to Roma.

By this time Tommy – and Tony Green who went to Newcastle – were the outstanding Blackpool players of the day. Having been his team-mate at Bloomfield Road Coventry manager Gordon Milne knew the talent he was buying when he turned Tommy Sky Blue in October 1972, Billy Rafferty going the other way in part-exchange.

It represented a big profit for Blackpool who had paid £10,000 to sign him from Alloa Athletic where even in his earliest days he had tasted matches at Hampden, albeit in games against Queens Park rather than in the blue of his country.

These days Tommy lives back in his native Fife at Thornton and enjoys life in his caravan at Elie, and is still a regular and hugely popular figure at the Sky Blues and Former Player Association's Legends Days. People often as him about scoring at both ends in the 1981 FA Cup final when he was a team-mate of Dave Bennett for Manchester City against Spurs. Hutchison likes to tell them that’s not true – as both goals were at the same end! Typical Tommy, always with a trick to come out on top. 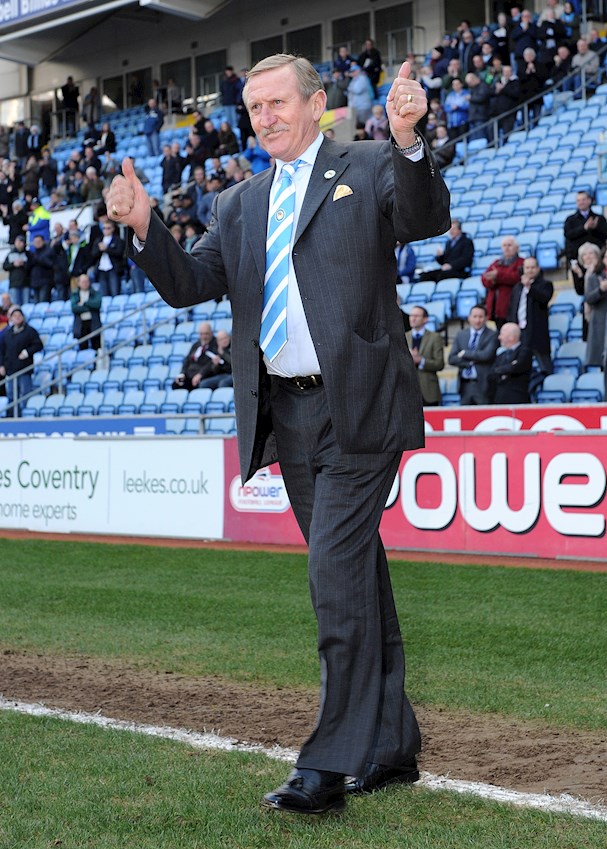