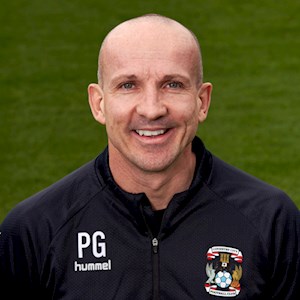 Coventry City appointed Paul Godfrey as the Club’s Head of Medical and Performance in the Summer of 2019.

Paul is an experienced Physiotherapist & Physiologist with over 25 years of experience in the industry.

In his role, he oversees the assessment, diagnosis, treatment and rehabilitation of all injuries sustained by the Sky Blues first-team and Under 23s, alongside implementing the necessary Sport Science protocols.

He joins the Sky Blues having previously held roles at Notts County from 2009 to 2011, Swindon Town from 2011 to 2017 and Cardiff City in the 2017/18 season, and also previously worked for UK Athletics and the English Institute for Sport.