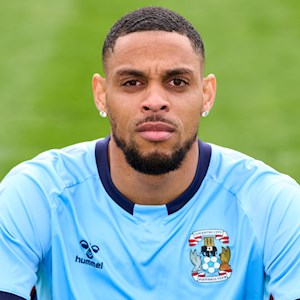 Wesley joined the Sky Blues from Gazelec Football Club Ajaccio for an undisclosed fee, signing a three-year-deal during the transfer window of 2019.

Starting his career in French Ligue 1 and the Europa League with Marseille, the winger represented France at Under 18 level but has since played internationally for Martinique.

Moving from Marseille in 2015, the pacy 6ft winger joined Clermont and would go on to make 59 appearances and score 7 goals for the French Ligue 2 club.

He stayed there for two seasons before making the transfer to fellow Ligue 2 side Gazelec Football Club Ajaccio, for who he would appear 63 times, scoring 5 goals in the process.

The winger would then agreed to move to England and link up with the Sky Blues ahead of the 2019/20 League One season.

Jobello enjoyed a bright start to his Sky Blues career, scoring his first goal in a 3-2 win over Blackpool.

The Sky Blues wouldn't lose with Jobello in the starting eleven, before his season was over after he suffered an ACL injury in training before City's clash with Rotherham United.