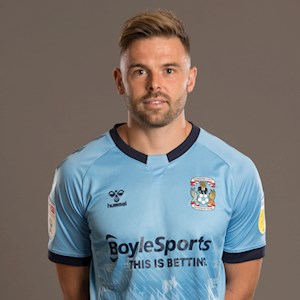 Matt Godden joined the Sky Blues in August 2019 from promotion rivals Peterborough for an undisclosed fee.

He then plied his trade permanently at Ebbsfleet, maintaining a record of a goal every two games.

A move to Stevenage followed and the goals continued, before joining Peterborough for the 2018/2019 season, where he notched 14 league goals, before joining Coventry for this season.

And the striker hasn't failed to dissapoint, doing exactly what he says on the tin, scoring goals.

Despite an injury keeping him out for almost 8 weeks, Godden has been amongst the goals all season, including back-to-back hat-tricks against Wycombe and Tranmere.

Godden's goals saw him end the year as the clubs top goalscorer, as he helped fire City to promotion and the League One title.

And his performances didn't go unoticed, as he was named in the PFA League One Team of the Year for the 2019/20 season.