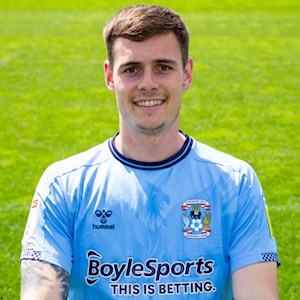 Michael Rose agreed to join the Sky Blues on a pre-contract agreement back in January of 2019 from Scottish Championship side Ayr United.

Rose started his youth career with Scottish side Glendale, before sandwiching a move to Lewis United between two spells with Aberdeen. After eventually signing his first professional deal with the Dons Rose was sent out on loan to Scottish side Forfar Athletic for two months, where he made seven appearances in the Scottish League One.

After returning from his spell on loan, Rose made his debut for Aberdeen against St Johnstone towards the end of the 2015/16 season. However, that would be his only appearance for the club, as Michael left and joined Ayr, going on to make 108 appearances and scoring six goals.

His performances in Scotland alerted interest from the Sky Blues and Rose agreed to join City for the start of the 2019/20 season, where he would quickly establish himself as a key player in what would prove to be an incredible season.

Alongside fellow defenders, Dom Hyam and Kyle McFadzean, Rose formed a partnership which saw the trio keep 15 clean sheets in League One, as they helped City secure the title and a return back to the Championship.

The following season, Rose saw his first year in the Championship hampered with injuries, as he missed the start of the 2020/21 season, the first of several injuries as he would only make 18 appearances in total.

However, despite an injury hit season Rose was rewarded for his efforts the previous year, as he signed a new three-year-deal with the club back in October 2020.