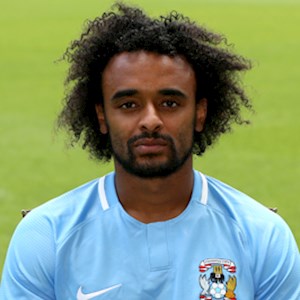 Out On Loan
Scunthorpe United

Brown began his career at hometown club Crewe Alexandra, where he made a solitary appearance as a substitute in a league match with Brighton on 2nd February 2008.

After spells in non-league football with Halifax and Northwich Victoria, he signed for Fleetwood Town in 2010 where he was part of the squad that saw Fleetwood promoted for the first time in their history.

He left Fleetwood Town having made 122 appearences and scoring 15 goals, signing for League Two side Oxford United in July 2014.

After making 15 appearences with the U's he joined Mansfield Town on loan for the rest of the 2014-15 season, where he made a total of 24 appearences scoring 2 goals.

Brown then moved to Shrewsbury Town in League One on a free transfer in June 2015, re-uniting with his former manager at Fleetwood, Micky Mellon. He made 108 appearences for the club, scoring 7 goals before joining the Sky Blues on a 2-year deal in July 2018.

During the 2018/19 season, Junior made 23 appearances in his first season for the club.