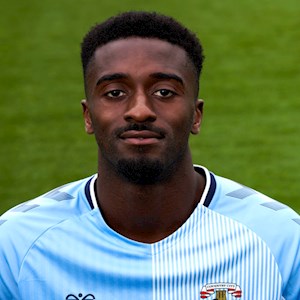 The striker joined the Sky Blues on a two year-deal from Huddersfield Town in 2018.

Born in Manchester, Jordy rose through the ranks at local side Manchester City, scoring 20 goals in 31 appearances for the Under 21’s during the 2013/14 season, earning his first professional deal with the club.

He then went out on loan to Yeovil Town and Walsall, where he scored 9 goals in 19 games with the latter during a three-month loan at the end of the 2014/15 season.

His impressive form then caught the attention of Huddersfield Town, who signed the striker for an undisclosed fee.

Hiwula has since had loan spells with League One sides; Wigan Athletic, Walsall, Bradford City and Fleetwood Town.

Last season during his first year with the club, Hiwula was the clubs top goal scorer with 13 goals in all competitions.

The striker also won the Goal of the Season award for his superb solo striker against Fleetwood Town in a 2-1 win.

The following season, Hiwula started the season in a front three alongside Matty Godden and Wesley Jobello.

However, an injury to Hiwula and Jobello forced Mark Robins to change the system and since the striker's return to the side he has to bide his time.