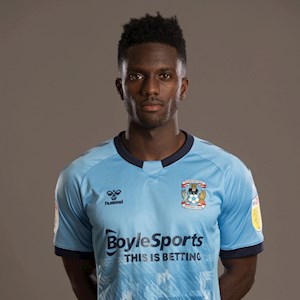 Brandon Mason joined the Sky Blues back in the summer of 2018 following the expiry of his contract with Premier League side Watford.

Mason rose through the ranks with the Hornets as he graduated through their youth system, going on to be make his professional debut at Vicarage Road during a 4-1 defeat to Tottenham Hotspur in the Premier League, as he came off the bench.

The left-back was then handed his first start in 2017 in the Emirates FA Cup against Burton Albion a few days later, the first of three starts with the others coming against Millwall and Manchester City.

In January 2018, Mason joined Scottish Championship club Dundee on loan until the end of the 2017-18 season. Mason made two appearances in Scotland before, returning to England after being released by Watford, signing for the Sky Blues.

Mason went on to make 28 appearances for the Sky Blues throughout the 2018/19 League One campaign, agreeing a new three-year-deal with the Sky Blues after an impressive start to the following season, in which he played his part in helping City win promotion to the Championship, securing the League One title.

Ahead of the start of the 20/21 season, after featuring for City in the Carabao Cup against Gillingham, Brandon was sent out on loan to Scottish Premiership side St Mirren.

Mason played 12 times for the Scottish side during the campaign, including a famous win over Rangers in the League Cup, one of just a handful of defeats the Gers would occur that season.