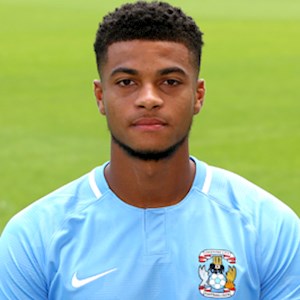 Out On Loan
Wrexham

Jordon signed his first professional contract tsummer, when he graduated from the youth academy to the first team this season.

The defender would then join Barrow on loan for the start of the 2017/18 campaign in the National League and enjoyed a good spell in the team.

Thompson was then rewarded with his first taste of first team football when he returned from his loan spell in November, coming on as a substitute in the 2-1 EFL Trophy win against West Bromwich Albion U23s, earning praise from Manager Mark Robins.

The defender progressed with Jason Farndon in the under-23s and would be named as a substitute in the League Two Play-Off Final.

The following season saw Jordon go on to make his first league start for the Sky Blues in a 1-1 draw with Accrington Stanley.

However, the remainder of his season saw his progress hampered by injuries, as he would go on to make eight appearances.

Ahead of the 2019/20 season, Thompson joined National League side Boreham Wood on a season long loan.