Coventry City are delighted to unveil the new Sky Blues home kit for the 2022/23 season!

The Sky Blues’ new Hummel kit is available to pre-order now – visit ccfcstore.com to pre-order yours and be amongst the first to own our new kit!

The home shirt is completely bespoke to Coventry City, after the Club has worked closely with Hummel on another iconic kit design which once more celebrates the identity and history of Coventry City and the City of Coventry. 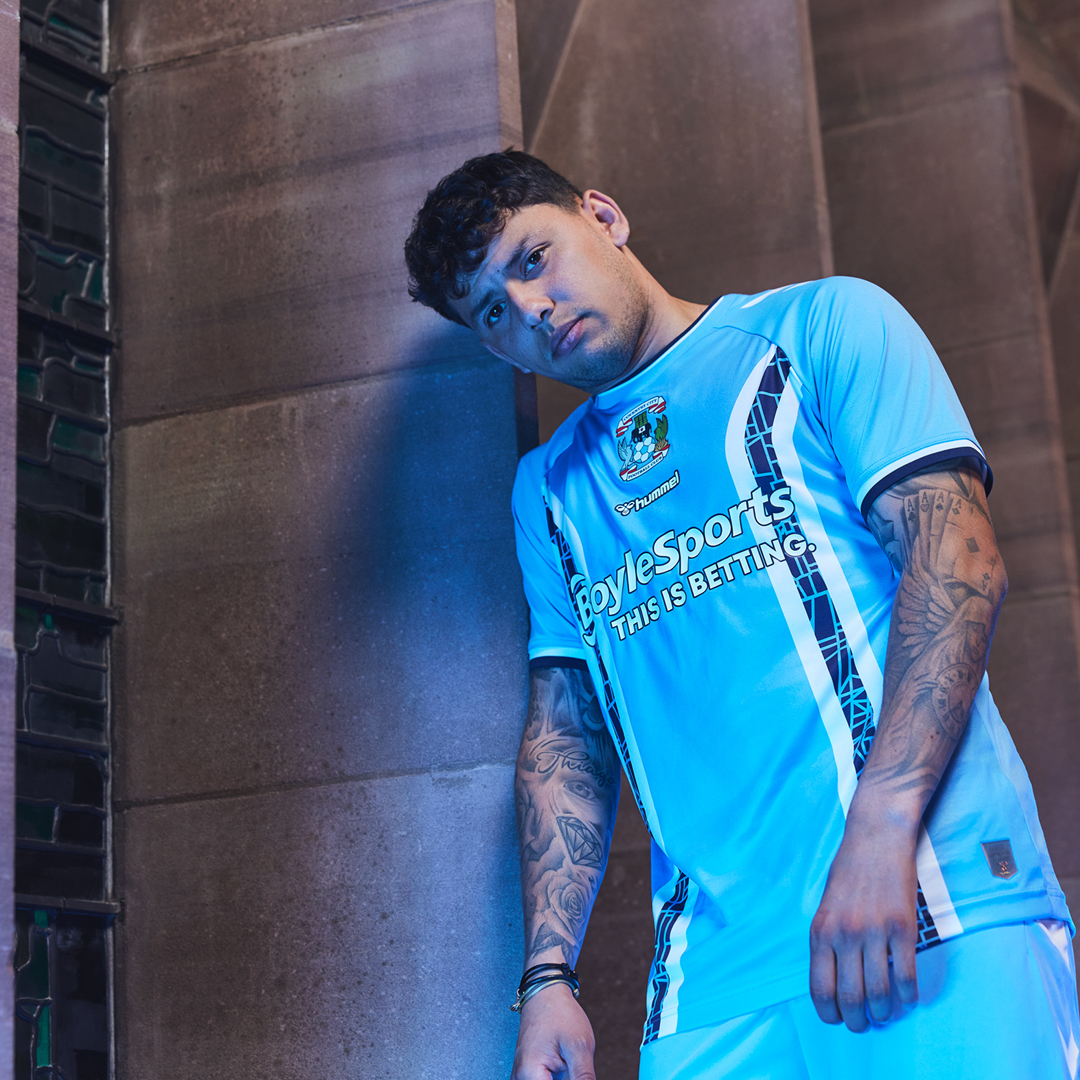 Hugely popular, the tramlines made famous in the 70s have returned on the front of the Sky Blues shirt for next season, either side of the Club crest. 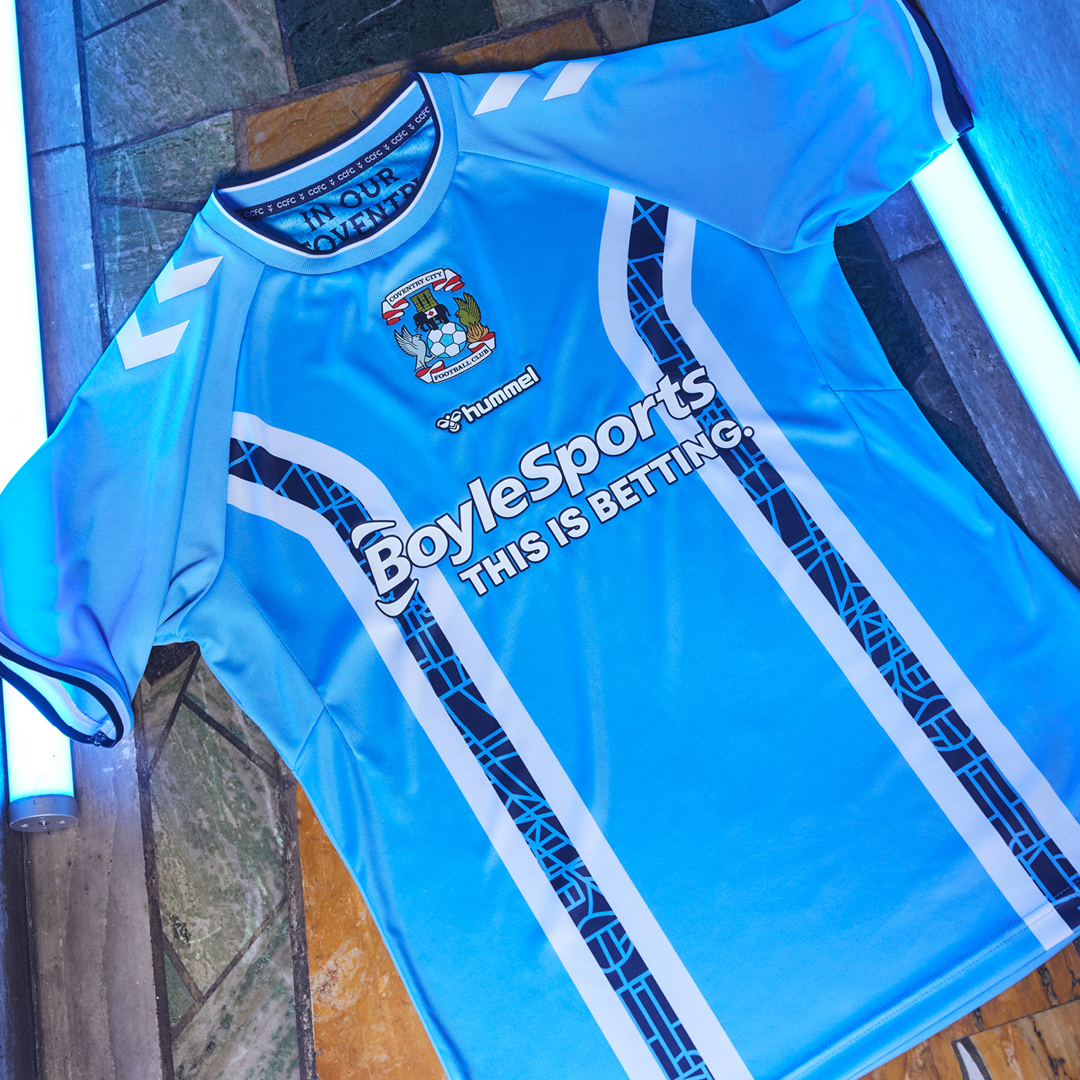 25th May marks the 60th anniversary of the consecration of Coventry Cathedral in 1962 and the tramline includes the pattern from the stained-glass windows of the Cathedral.

Elsewhere, the stained-glass windows are also replicated inside the neck of the shirt, alongside the words ‘In Our Coventry Homes’. 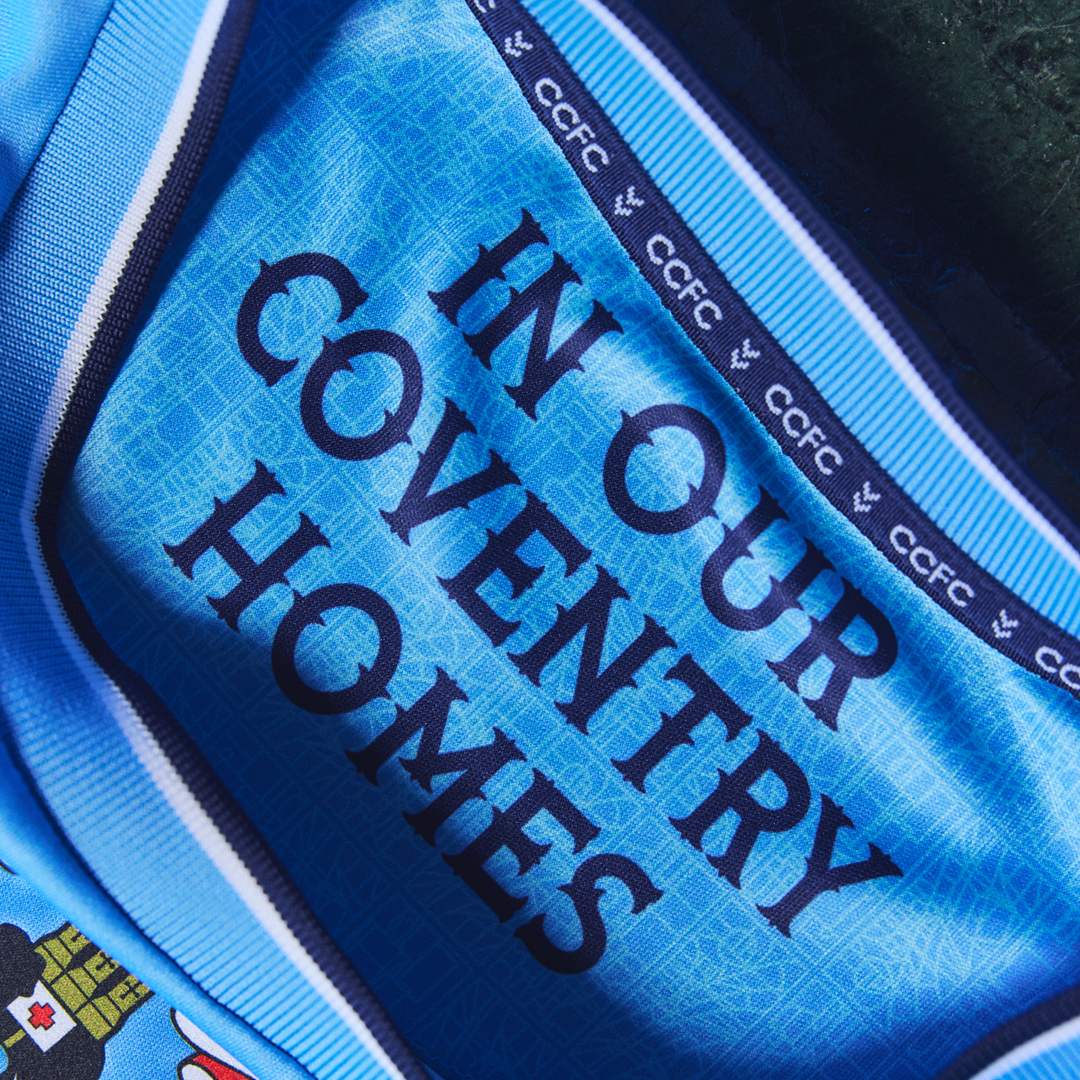 The shirt features a classic round neck collar, designed for comfort and style, while the famous Hummel chevrons feature prominently on the sleeves.

Coventry City’s sponsor BoyleSports is on the front of the shirt too and is in keeping with the overall design of the kit. The BoyleSports logo will be on all retail shirts, except for Junior and Infant sizes. 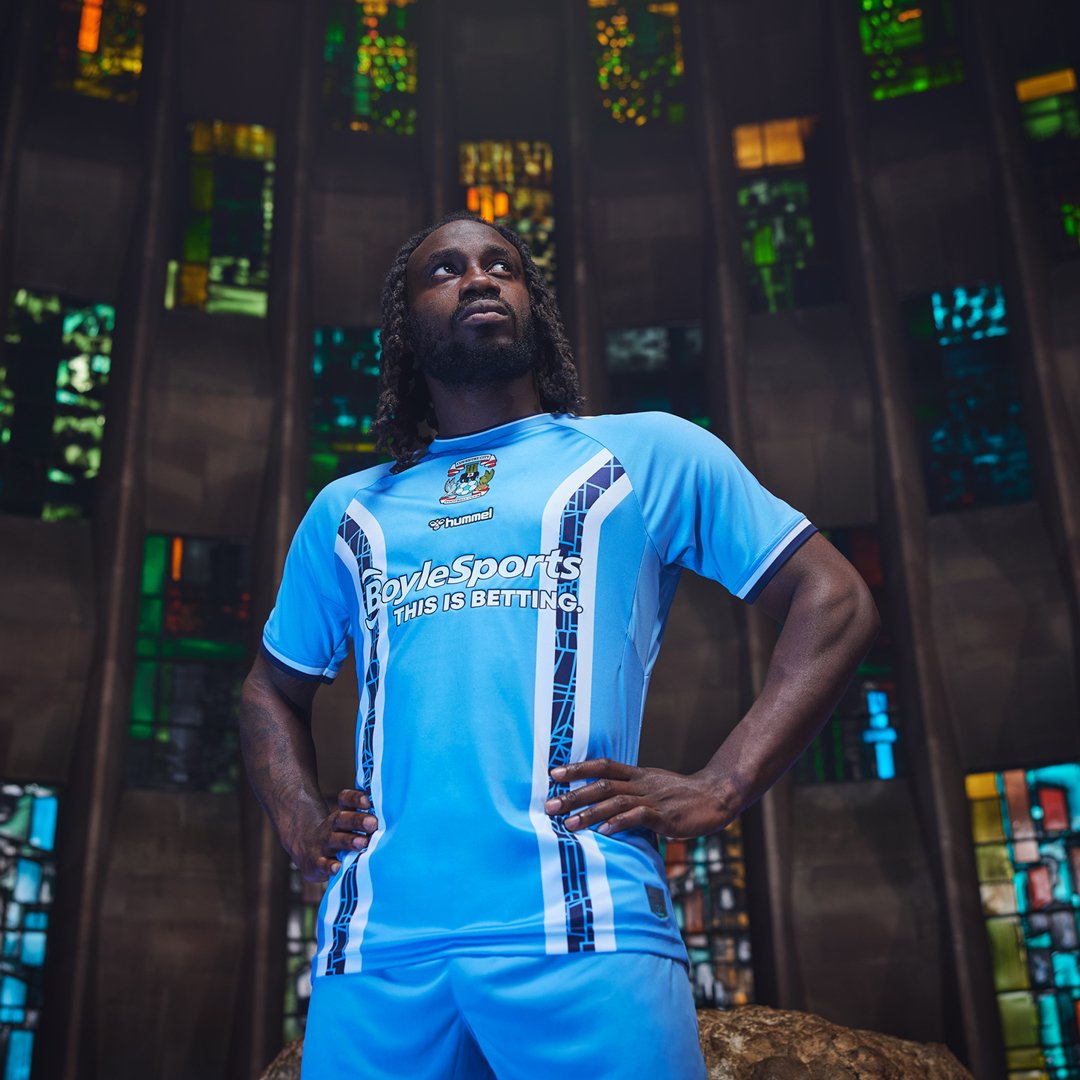 Coventry City’s kits use hummel’s ECO8 technology, meaning each shirt is manufactured from high-performing polyester produced from up to eight recycled plastic bottles. This helps both the Sky Blues and Hummel to reduce our carbon footprint and raise sustainability awareness amongst our fans.

The kits also feature hummel’s ZEROH2O dry-dye technology, a ground-breaking process that ensures there is zero water consumption, zero wastewater and a 50 per cent reduction in energy consumption during the dying phase of production.

Sponsors XL Motors and G&R Scaffolding also features on the kits, while the new Sky Blues shorts and socks for the 22/23 campaign are also available to pre-order now - again featuring the famous Hummel chevrons in a classic style.

The kit will go on general sale at 9:30am on Thursday 30th June in the Club Shop at the Coventry Building Society Arena.

Pre-orders are expected to be dispatched in June, with pre-orders scheduled to be with fans prior to the general sale date. 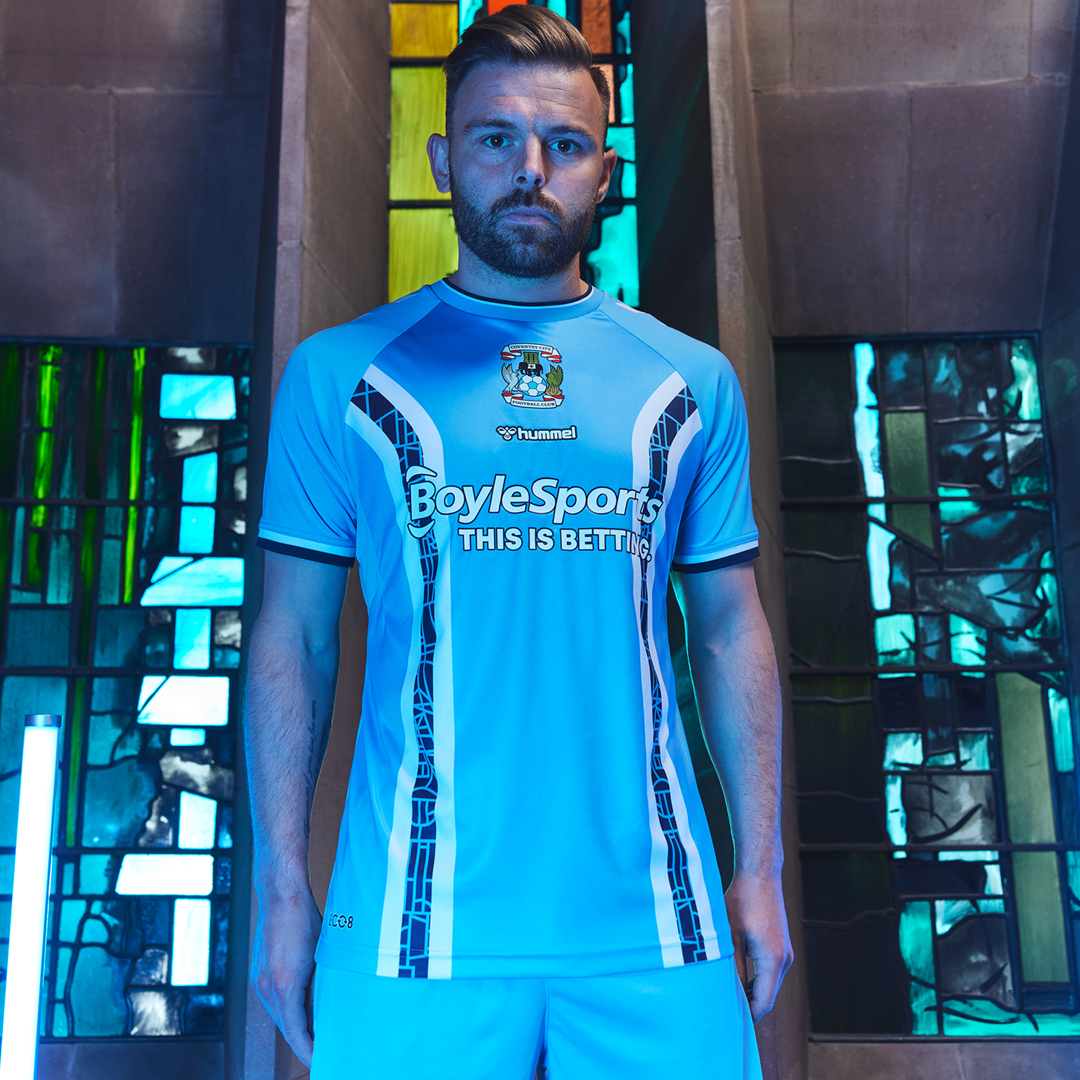 “As well as featuring the popular tramlines from the 1970s, we are proud to also include Coventry Cathedral within the design, as one of the most famous buildings in our City reaches its 60th anniversary.

“After featuring the Phoenix rising from the flames last season, featuring the Cathedral seems appropriate as this was one of the symbols of the City’s reconstruction following World War Two.

“The team at Hummel and staff behind the scenes at Coventry City have worked closely again to create a totally bespoke kit and another superb design, which we hope will prove very popular with Sky Blues supporters.” 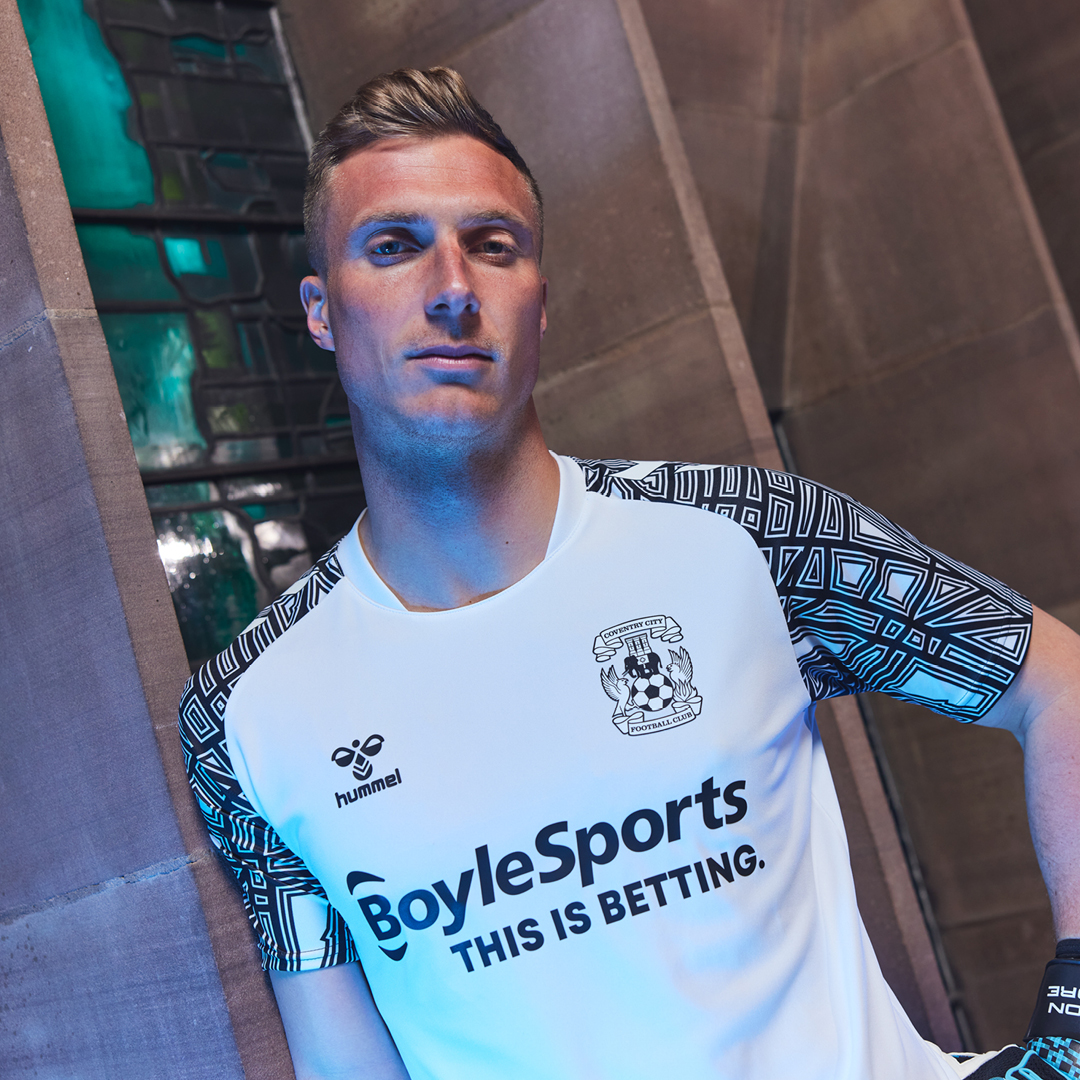 The home goalkeeper kit for 2022/23 has also been revealed too!

The short-sleeved shirt is white on the front and back, marking a new style for Sky Blues goalkeepers.

Like the home outfield shirt, the goalkeeper kit helps to mark 60 years since the Consecration of Coventry Cathedral.

An enlarged section from a stained-glass window of Coventry Cathedral is used on the sleeves of the shirt to create a striking and unique geometric pattern. 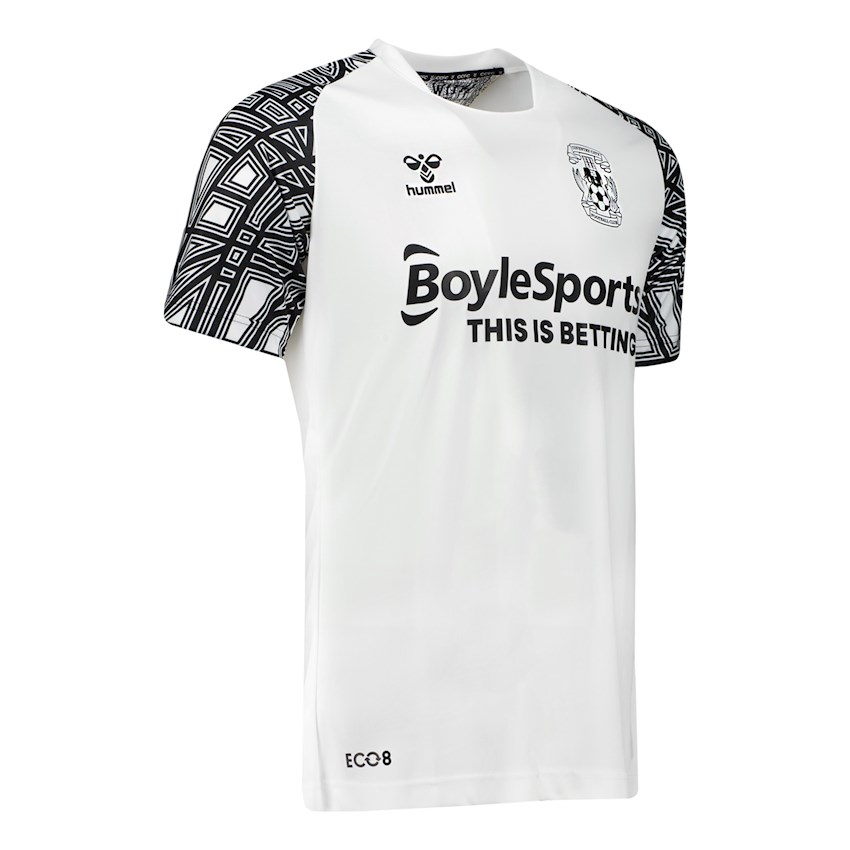 The goalkeeper kit will also go on general sale at 9:30am on Thursday 30th June in the Club Shop at the Coventry Building Society Arena.

Pre-orders are expected to be dispatched in June, with pre-orders scheduled to be with fans prior to the general sale date.