We are giving supporters the opportunity to win a copy of legendary commentator Clive Tyldesley's commentary chart from City's 1987 FA Cup Final victory.

Tyldesley made his radio commentary debut in 1976 and delivered his first television commentary in 1989. He creates a hand-written a chart for every match and did so for the Sky Blues FA Cup victory over Tottenham Hotspur back in 1987. 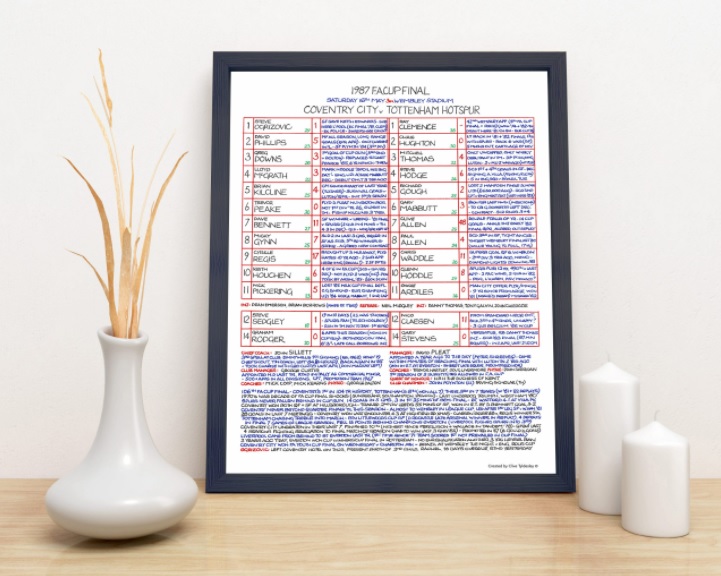 He describes that day as the following:

‘Coventry City didn’t just win the FA Cup in 1987, they won one of the greatest Cup finals in history.

It was an underdog victory against a star-studded Spurs side that twice took the lead at Wembley.

But Keith Houchen’s iconic diving header and Gary Mabbutt’s knee combined to create one of the most memorable of all Cup shocks and leave the late, great John Sillett to conduct the Coventry choirs in celebrations that will never be forgotten.’

Tyldesley started up ‘Commentary Charts’ with authentic reproductions of original prep notes from memorable matches he worked on, then soon began to receive requests from fans to compile impressions of charts for the iconic games played by their favourite team.

Now, if you would like the opportunity to win a copy of Tyldesley’s commentary chart from the 1987 FA Cup Final, then test your knowledge from that day.

We have compiled 12 questions about the 3-2 victory over Tottenham and you need to simply answer the questions and send them to matchday@ccfc.co.uk by 5pm on Friday April 1st 2022 to be in with a chance of walking away with the famous commentary chart.

1) Who was the scorer of City's third and final goal?

2) Who captained the Sky Blues that day?

3) Where was the final held?

5) Who was in charge of Tottenham Hotspur?

6) Which player from City’s starting eleven would go on to become the club’s record appearance holder?

7) What was the name of City’s song they released for the final?

8) Which City substitute came on in the 89th minute?

9) Who did City beat in the semi-finals?

11) Which Tottenham player who featured in the final went on to win the PFA Players' Player of the Year in 1987?

Remember, you must send the answers to matchday@ccfc.co.uk by 5pm on Friday April 1st 2022 to be in with a chance of walking away with the famous commentary chart.