The Sky Blues travel to South London on Saturday to face Millwall in the Sky Bet Championship. Here’s everything you need to know about our opponents. 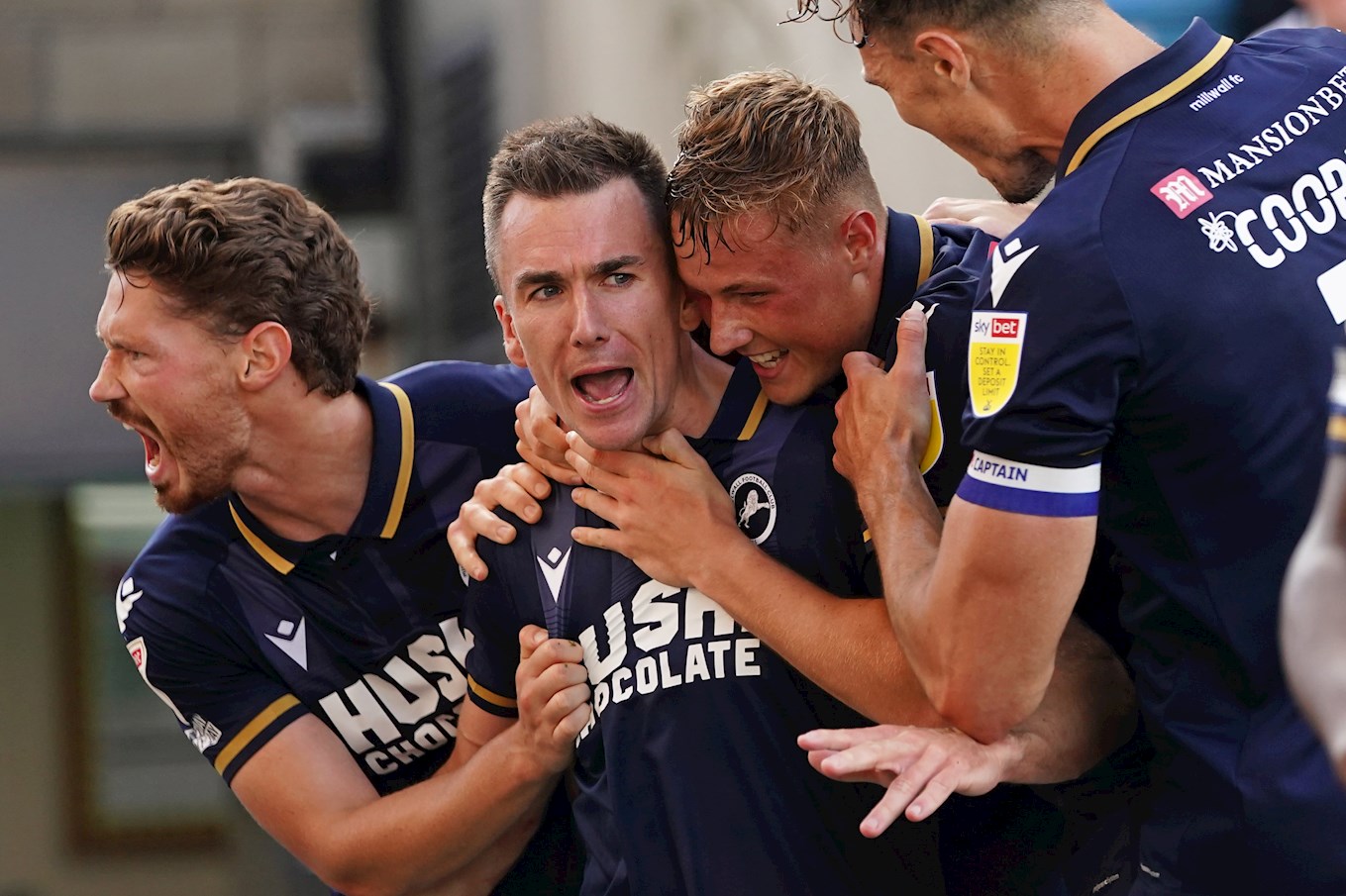 Millwall find themselves 15th in the Championship table after seven matches

In his first full season in charge Rowett lead the Lions to an eleventh place finish and hopes to build up on that with the help of the six signings that came through the doors at The Den this summer.

Millwall welcomed back two familiar faces this summer in the shape of George Saville and Scott Malone. Midfielder Saville returns for a fourth spell with the Lions after spending two years on Teesside, meanwhile full back Malone rejoins on a permeant deal after spending last season on loan from Derby County and are joined by former Hull City goalkeeper George Long.

This summer saw the departure of the long serving duo Shaun Williams and Shane Ferguson, to Portsmouth and Rotherham United respectively, with Rowett dipped into the loan market to sign Arsenal’s Daniel Ballard, Liverpool’s Sheyi Ojo and striker Benik Afobe from Stoke City, who had a brief spell on loan at Lions in 2013.

Millwall have only won one match so far this season when they ended August with victory over Blackpool but have ground out three impressive draws on the road at Queens Park Rangers, West Bromwich Albion and Swansea City as well as taking a point from a home clash with Blackburn Rovers.

Jed Wallace leads the goal scoring charts with three so far with Benik Afobe close behind after netting against Fulham and Cardiff City. 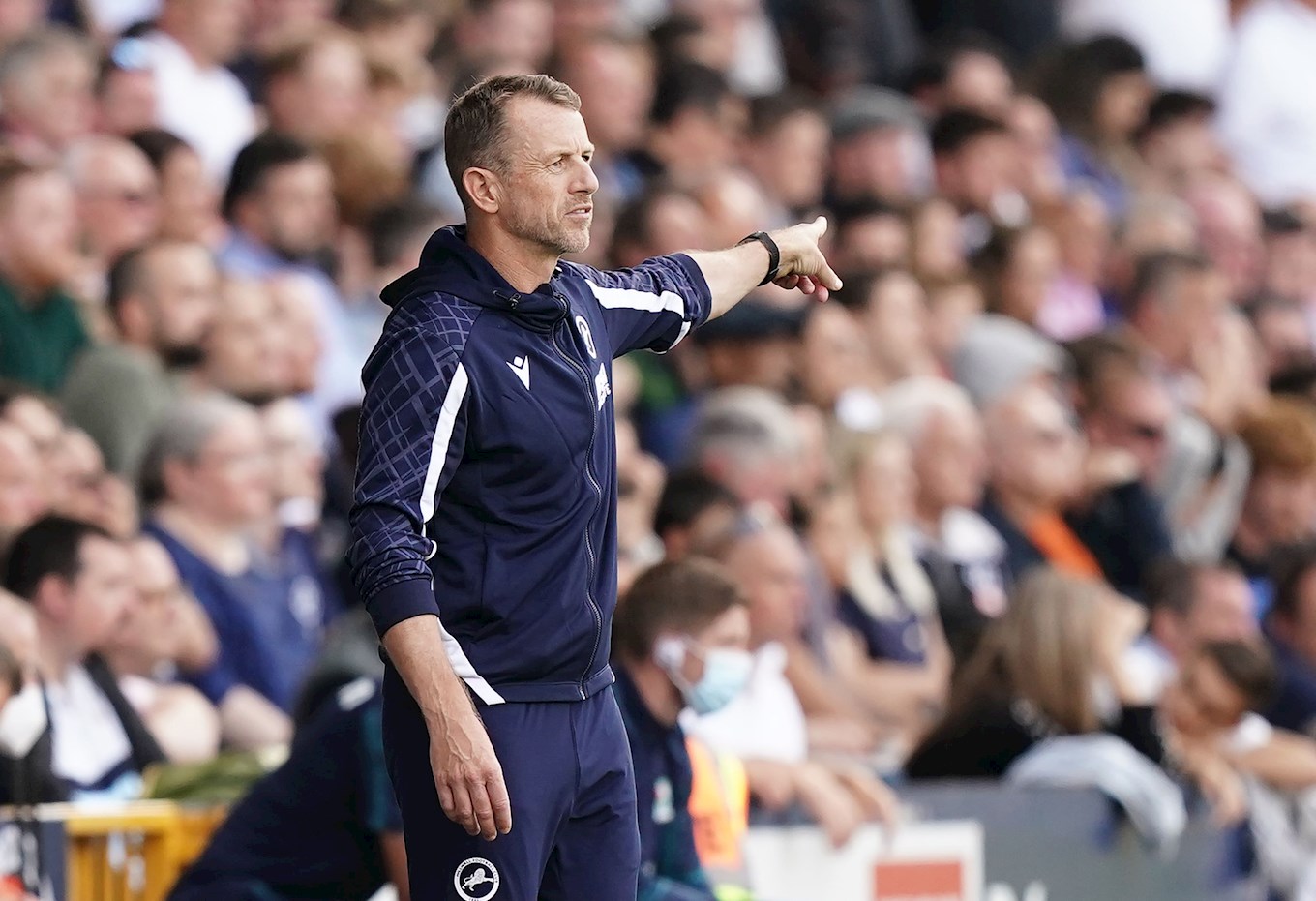 Gary Rowett ended his 16-year playing career with Burton Albion in 2007 and it was with the Brewers two years later he began his coaching career as assistant to Paul Peschisolido with his first taste of management coming in a caretaker capacity after Peschisolido’s sacking in 2012.

Three wins from the last ten games of the season was enough to see Rowett rewarded with the role permanently and he ended his first full season in charge by taking the Staffordshire side into the League Two Play Offs before defeat to Bradford City in the semi finals.

With Championship clubs beginning to take notice, Birmingham acquired the services of their former defender in October 2014 with his brief to get Blues out of the relegation fight, which he successfully achieved with a tenth-place finish, after only losing two of his first 15 matches in charge.

Another tenth-placed finish would follow in 2015/16 before Rowett was surprising sacked after a 2-1 victory over Ipswich Town which left Blues outside the Championship Play Offs on goal difference.

Rowett’s next job would also see him return to a club from his playing days in the form of Derby County. Almost 20 years after leaving Derbyshire he was appointed in March 2017, taking 15 points from the remaining nine matches to finish 9th in the Championship.

The Rams started the 2017/18 season slowly but form soon picked up which saw the Rams occupy second spot over the New Year period but an eight game winless run put even a play off spot at risk before seven points from the last three matches saw Derby finish sixth before losing over two legs to Fulham.

Stoke City, who had been the relegated from the Premier League earlier that month, appointed Rowett in May 2018 and he was tasked with taking the Potters back up at the first time of asking.

Despite making some big money signings with the arrivals of Peter Etobe, Tom Ince, Sam Clucas and Benik Afobe coming through the door, they made a slow start to the season with only two wins from their opening ten games.

Rowett then presided over a ten game unbeaten run however late equalisers in three of those matches cost Stoke dearly and after a winless run over Christmas saw Rowett dismissed after a 1-1 draw with Shrewsbury Town in the FA Cup Third Round.

The 47-year-old took over Millwall in October 2019, ironically beating Stoke in his first match in charge as he turned around the South London Club’s form which eventually saw them finish only two points off the Play Offs.

Last season was Rowett’s first full season in charge in SE16 and a run of five wins in seven in the Spring helped earn the Lions an eleventh-place finish.

With the Lions, Rowett has managed 95 matches recording 36 wins, 32 draws and 27 defeats.

The two sides last met in May 2021 on the final day of the season when the Sky Blues thrashed the Lions 6-1 as City left St Andrews on a high.

Jordan Shipley opened the scoring in the 16th minute after he was set up by Callum O’Hare.

And the Sky Blues first half dominance was rewarded with a second just before the break when Kyle McFadzean volleyed in a Matty James corner.

Millwall got one back nine minutes into the second half when Scott Malone’s cross was unfortunately put into his own net by McFadzean.

Dom Hyam re-established the Sky Blues two goal advantage just five minutes later and was the first of three goals in an eight minute period when midfield duo O’Hare and James found the back of the net.

Shipley’s replacement Tyler Walker rounded off the win converted James’ corner with the result seeing City rise to a 16th place finish on our return to the Championship. 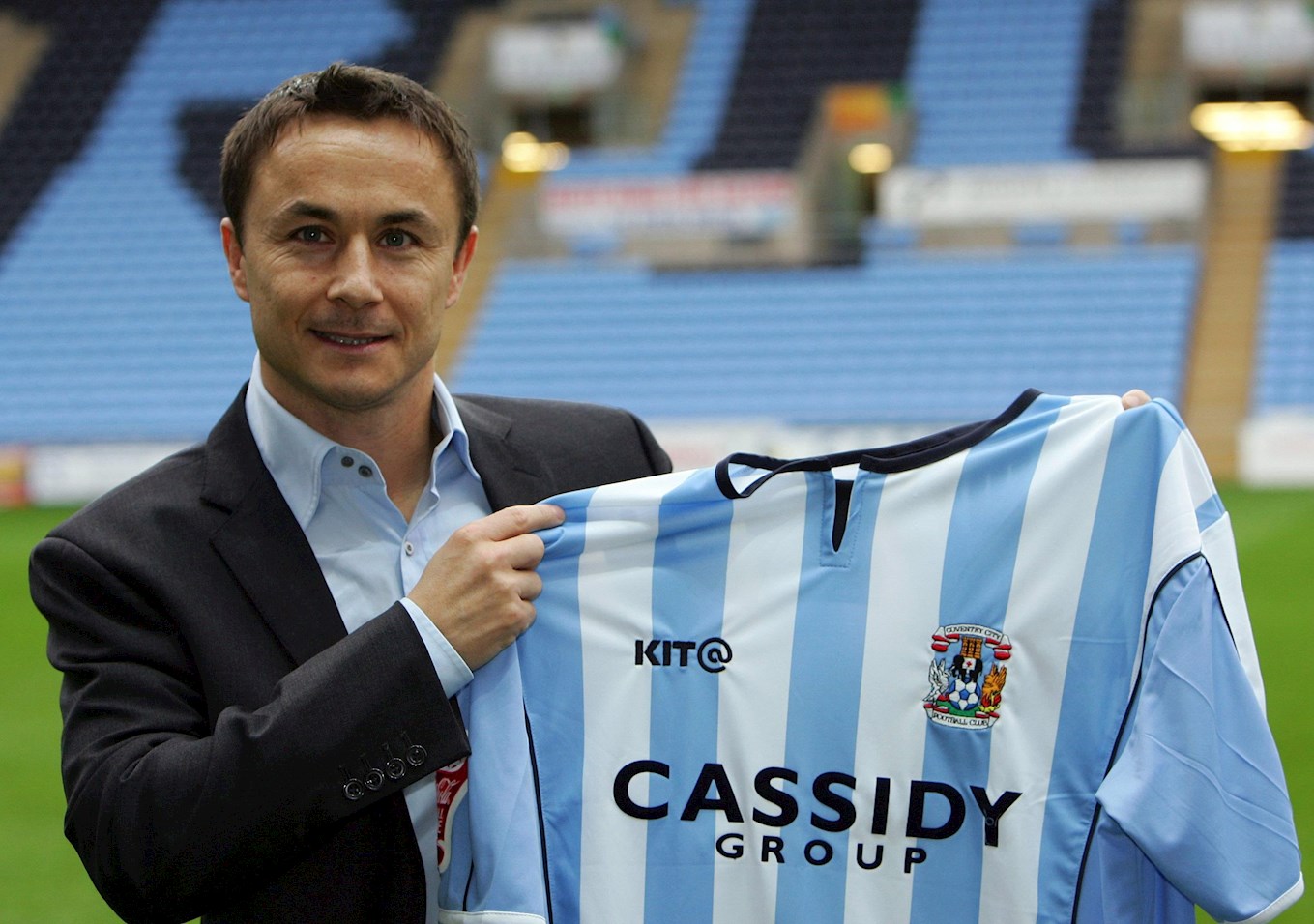 Three-time FA Cup Winner Dennis Wise spent almost three years at the Den before making his last appearances as a professional during a goal laden spell in the first season City had at the Coventry Building Society Arena.

The Kensington born midfielder would earn 21 caps for England over a nine-year international career that began with netting the only goal of the game on his debut against Turkey and ended months after participating at Euro 2000.

But Wise would begin his senior career at Wimbledon in 1985 under Dave Bassett, before netting five goals in ten games in a loan spell at Swedish outfit Grebbestads IF.

Returning from his loan spell Wise played his part in Wimbledon’s promotion to Division One in 1986 and made 27 starts as The Dons ended their first season in the top flight with a surprising sixth place finish.

1987/88 would prove to be the most famous season in the club’s history as they won the FA Cup, providing assists in the 6th Round against Watford and in the final to beat the much-fancied Liverpool.

Two years later Wise signed for Chelsea in a club record fee of £1.6 million and whilst at Stamford Bridge he would become the club’s most successful captain prior to John Terry, winning six trophies including the UEFA Cup Winners’ Cup in over a decade with the Blues.

After a short spell at Leicester Wise joined Millwall in 2002 where he became the player-manager just over a year later in October 2003 in a season that would end with an FA Cup Final.

Wise was unable to mastermind the spirit of 1988, but they did earn a place in the UEFA Cup, losing to Hungarian champions Ferencvaros, and after a tenth-place finish Wise resigned having made 91 appearances for the South London club.

A brief stint at Southampton would follow before Wise joined the Sky Blues in January 2006. City won the first three games Wise played in against Derby County, Hull City and Brighton and Hove Albion, with the then 39-year-old scoring a double against the Seagulls.

Further goals would follow against Plymouth Argyle and Cardiff City with the Sky Blues ending the season eighth in the Championship, with Wise hanging up his boots to return to management. 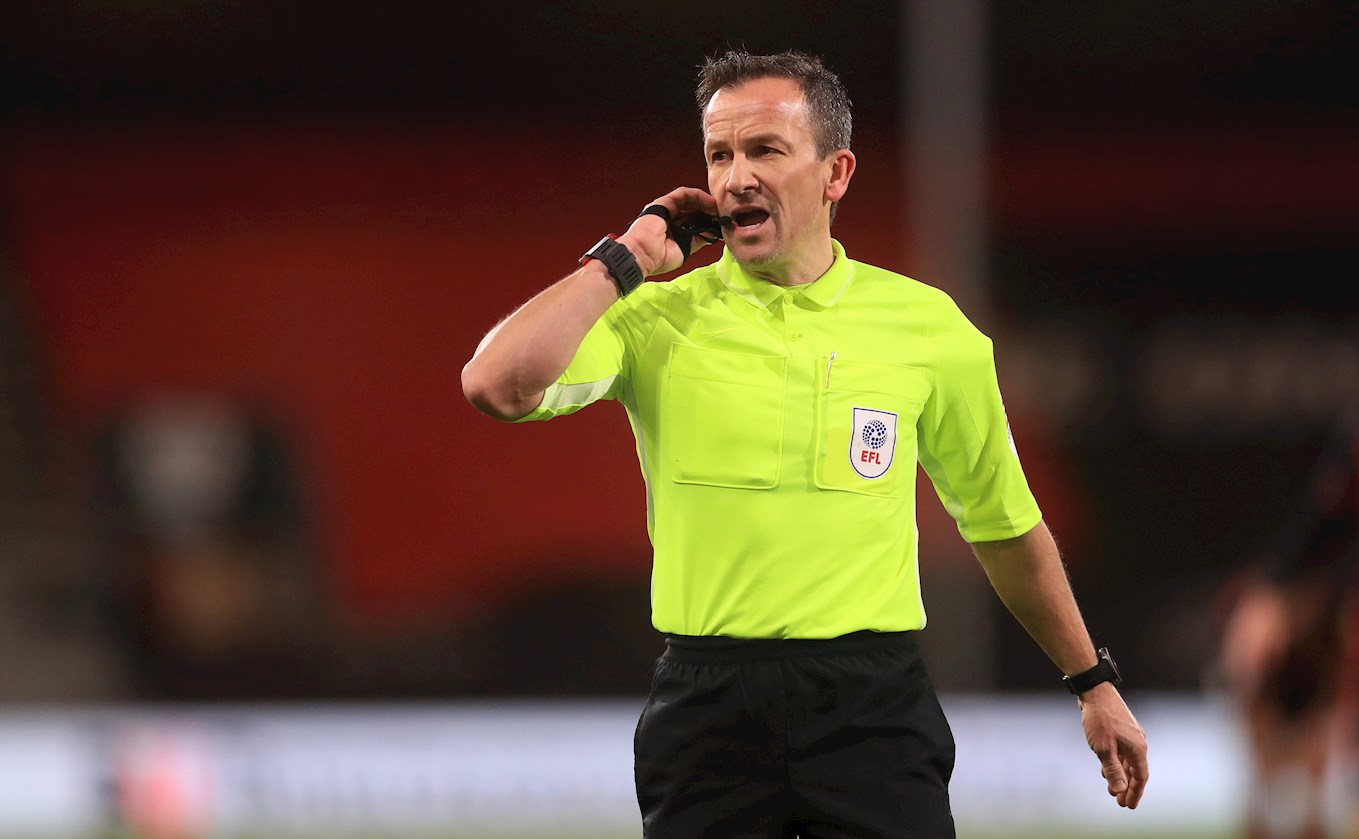 Keith Stroud will be the man in the middle on Saturday, taking charge of his sixth game of the 2021/22 season.

He has overseen 18 previous Sky Blues matches, with this being his second match of the season after last month’s victory at Blackpool.

So far, Stroud has awarded 25 yellow cards and no red cards across his five matches in the Sky Bet Championship this season.

He will be assisted by Ian Cooper and Sam Lewis with Matthew Russell acting as fourth official.

Sky Blues supporters snapped up 1822 in advance for our trip to Millwall - you will be able to pay on the gate too! Details here