The Sky Blues host Middlesbrough at the Coventry Building Society Arena this Saturday. Here’s everything you need to know about our opponents. 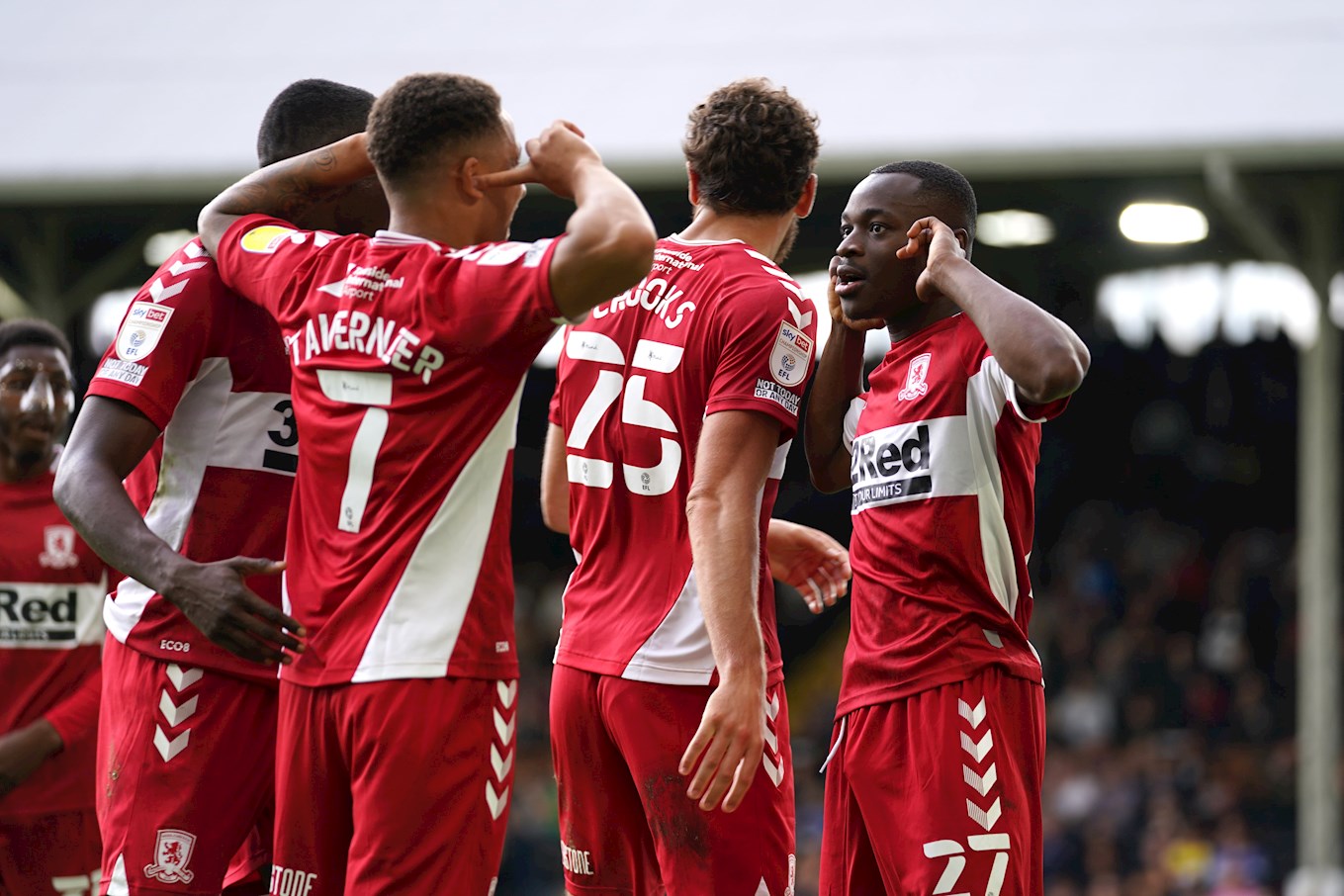 Middlesbrough will be hoping for another season of improvement after a 10th placed finish in 2020/21 after the previous season’s relegation scares. The North Yorkshire side spent most of the campaign sitting in the positions just outside the top six, despite their top scorer Duncan Watmore only netting nine, but two wins in the final nine matches put an end to promotion aspirations.

This summer has seen 12 new players come to Teesside, including the likes of Sammy Ameobi, Joe Lumley and Uche Ikpeazu heading north, as well as former Cardiff defender Sol Bamba reuniting with his former Bluebirds boss. Deadline day saw the final two incomings, including the exciting arrival of Slovenia international striker Andraž Šporar joining from Sporting Lisbon on loan for the season.

The Teessiders currently sit in 13th place in the Sky Bet Championship table with one win and three draws from their opening five league matches of the season, winning their only match so far against former captain Nigel Pearson’s Bristol City last month.

Making an early claim to be this season’s draw specialists, Warnock, as ever, has made his team hard to beat with their early goal difference of zero highlighting their defensive strength as much as their goal scoring troubles, which they’ll hope Šporar and Ikpeazu can ease. 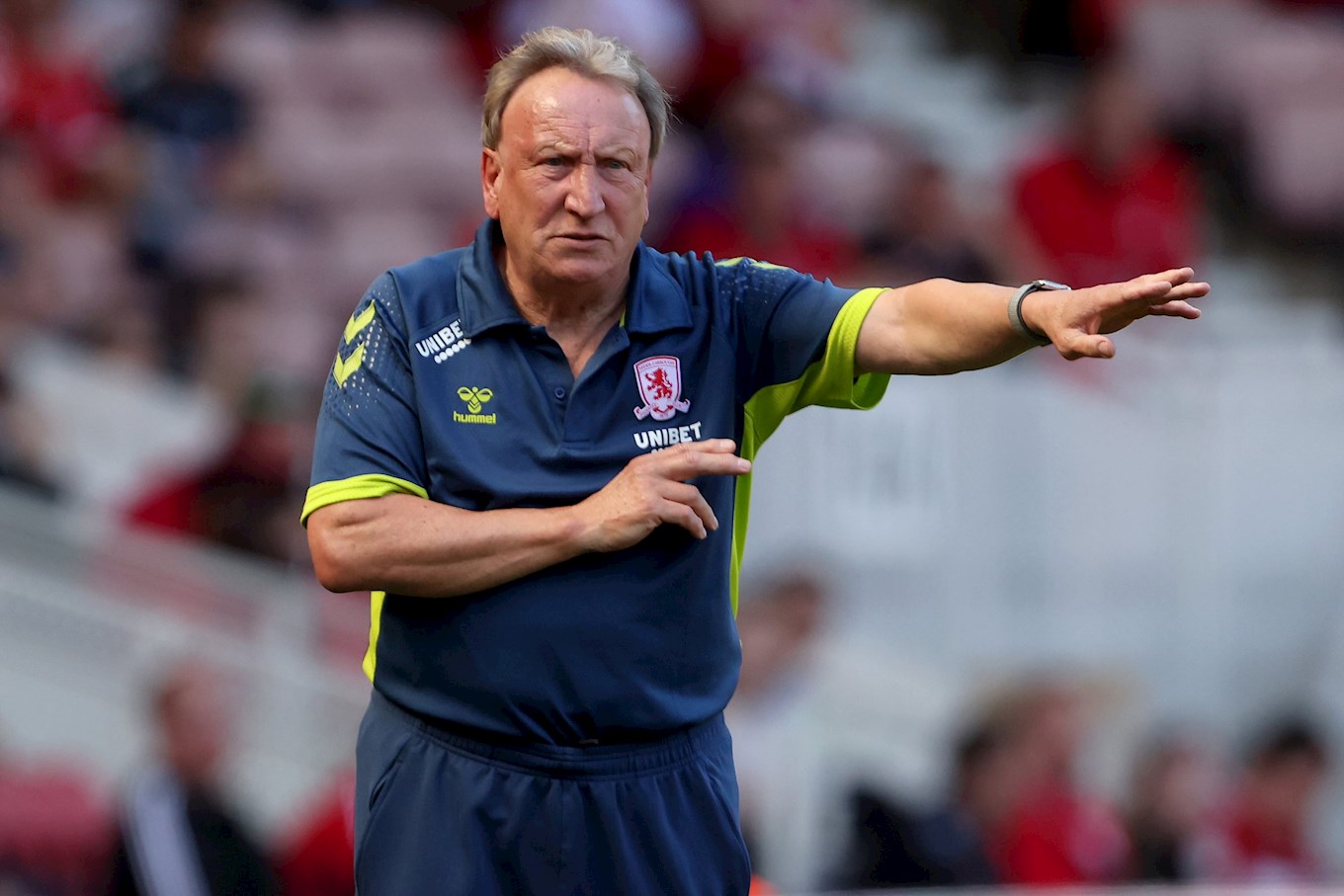 The Sheffield born boss began his coaching career in non-league circles in 1980 with Gainsborough Trinity then Burton Albion before arriving on the North Yorkshire at Scarborough where he won the Conference title in 1986/87 and led them to the Football League. Warnock started to earn his promotion winning reputation whilst at Notts County, achieving back-to-back promotions at Meadow Lane before leaving after failing to keep them in the top-flight.

Plainmoor would be Warnock’s next destination where he managed to keep Torquay United in the Football League before earning his third promotion, back in Yorkshire, with Huddersfield Town after the Terriers triumphed over Bristol Rovers in the Division Two play-off final.

He would return to Devon in 1995 to take charge of Plymouth Argyle, securing another promotion whilst at Home Park taking the Pilgrims back into the third tier with a play-off final victory over Darlington. Warnock would suffer relegations during his time at North West duo Oldham Athletic and Bury before ending the century by becoming manager of his boyhood club Sheffield United in 1999.

2002/03 would see the Blades reach the semi finals of both the League and FA Cups, losing to Liverpool and Arsenal respectively before the ultimate heart break of play-off final defeat to Wolverhampton Wanderers.

The South Yorkshire club began 2005/06 in fine form with ten wins from the opening 11 matches in a campaign that eventually saw the Blades end their 12 year absence from the top flight after finishing second.

The Blades achieved memorable wins over the likes of Newcastle United, Arsenal and Tottenham Hotspur the next campaign but defeat to Wigan Athletic ensured final day heartbreak with the result meaning relegation with Warnock leaving that summer.

Selhurst Park was Warnock’s next destination in October 2007 and he would stay in South London for two and a half years before he moved across the capital to Queens Park Rangers where he would win the Championship title in his first full season in charge before leaving the club, outside the Premier League relegation zone, in January 2012.

Just over a year at Leeds United would follow before a return to Crystal Palace in, which lasted four months at the end of 2014. He would follow up his time in SE25 with a brief return to the Rs again in, a caretaker capacity, before another return to his home county with Rotherham United.

When taking over the Millers in February 2016 were in a precarious position but a miraculous turnaround in form which included an eleven-game unbeaten run saw the South Yorkshire outfit survive comfortably in the end with Warnock leaving that summer.

But Warnock wouldn’t be out of the game for too long as he embarked on a three year stay in South Wales in October 2016 with Cardiff City, taking the Bluebirds from second bottom of the league to a twelfth-place finish before winning his eighth promotion as a manager the following season to return Cardiff to the Premier League for the first time in four years.

Their stay in the top flight would only last a season, going down by two points, and Warnock would depart in November 2019.

Warnock was appointed to his current role in June 2020 and took 12 points from his first eight matches to ensure a 17th placed finish before rising to tenth in his first full season at the helm.

The two sides last met in March 2021 when the Sky Blues fell to a late 2-1 defeat to the Boro in the Sky Bet Championship at St Andrews.

City initially took the lead when Anfernee Dijksteel put through his own net in the eleventh minute from a dangerous Sam McCallum long throw.

The visitors equalised just before half time when Grant Hall headed in Paddy McNair’s free kick. 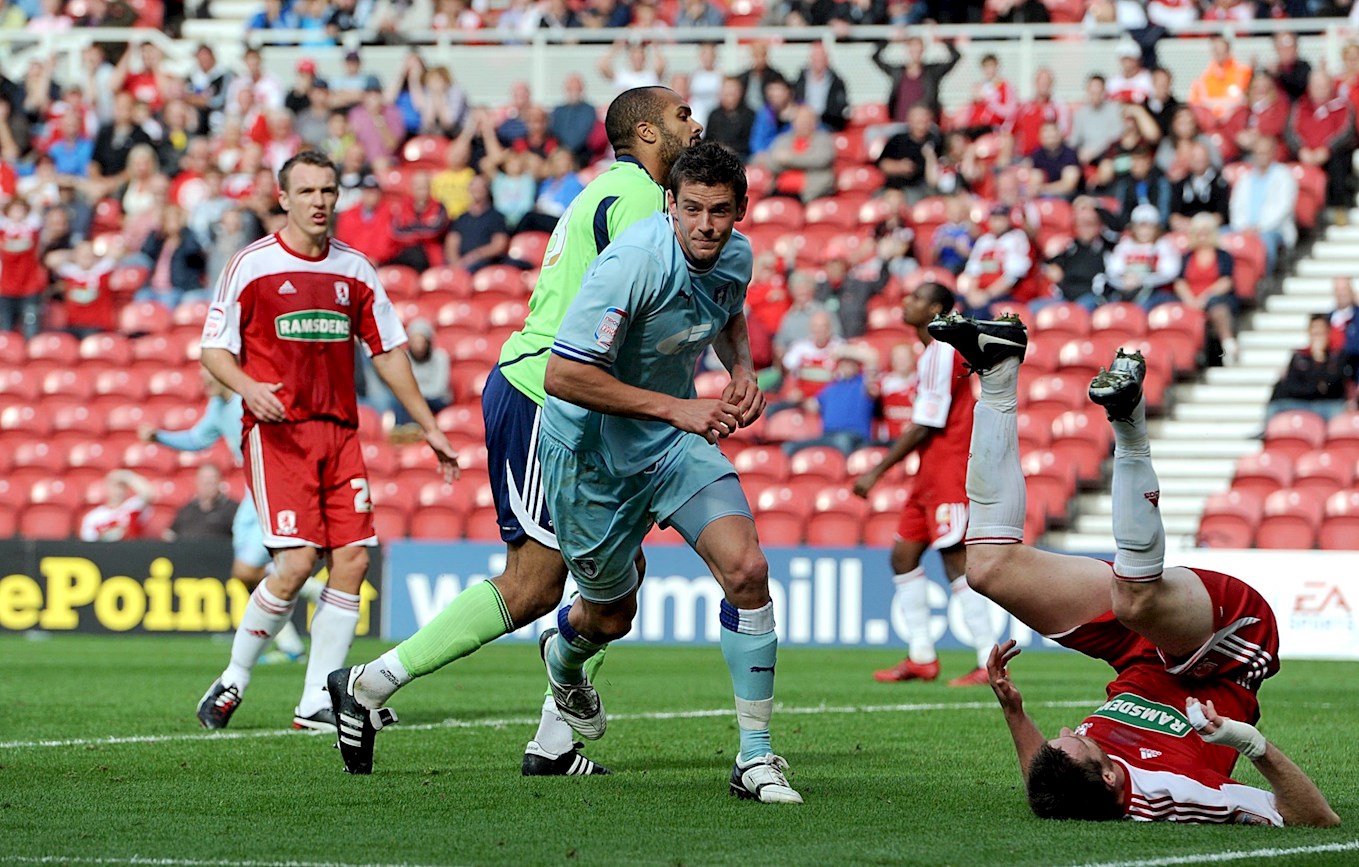 Southampton born striker Lukas Jutkiewicz made 69 appearances over a year and half year period with the Sky Blues before joining Middlesbrough in January 2012, where he stayed until the Summer of 2014.

He made his professional debut at just 17 for Swindon Town, winning the club’s Young Player of the Year Award for 2005/06, before netting five times the following season as the Robins earned promotion to League One.

That Summer would see Jutkiewicz join Premier League Everton for an initial £400,000, where he was sent out on loan to Plymouth Argyle before making his league debut for the Toffees against Sunderland in December 2008.

A loan spell at Huddersfield Town would follow for the second half of 2008/09, with another loan spell the next season seeing Jutkiewicz reach double figure goals for the first time whilst at Motherwell.

His fine goal scoring record at Fir Park attracted the attention of the Sky Blues boss Aidy Boothroyd to sign the striker, with his first goal being an injury time equaliser at Vicarage Road and would go on to score nine times over the course of the campaign.

After a strong start to the following season that saw Jutkiewicz find the net nine times once again, including City’s winner against Nottingham Forest and an equaliser against Middlesbrough, with the Teesside club signing him that January transfer window for £1.3 million.

His first Boro goal would come in an FA Cup defeat to Sunderland with another 14 to follow during his time at the Riverside before a loan spell to Bolton Wanderers in January 2014.

Jutkiewicz would earn a return to the Premier League when Sean Dyche brought him to Burnley upon the Clarets promotion, but it would be a move to Birmingham City that would see the striker finally settle where he has made over 200 appearances since his 2016 arrival at St Andrews. 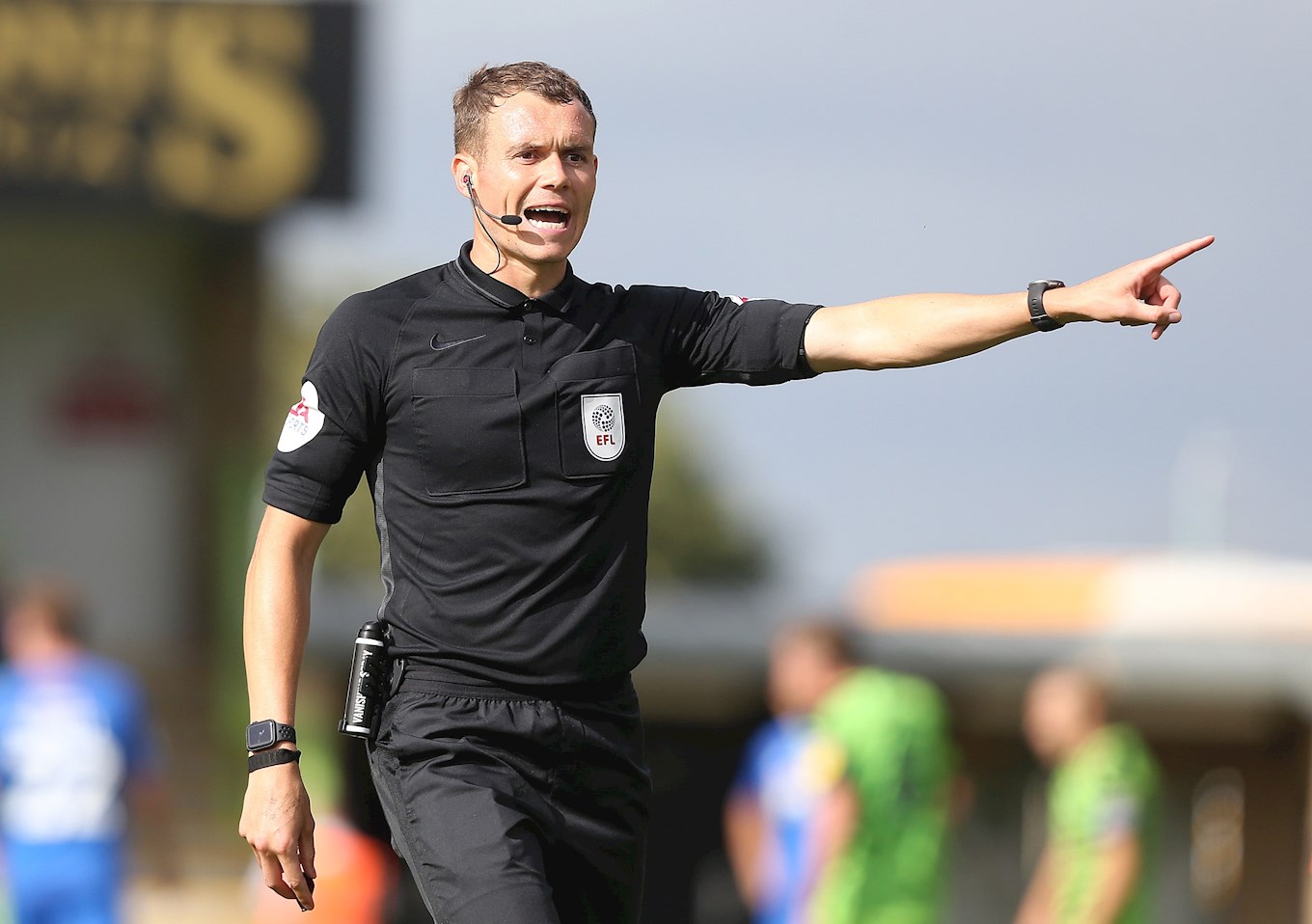 Leigh Doughty will be the man in the middle on Saturday afternoon, taking charge of his fourth game of the 2021/22 season.

He last refereed the Sky Blues in April 2021, overseeing our 3-1 victory over Bristol City.

So far, Doughty has awarded 11 yellow cards and no red cards across his three matches in the Sky Bet Championship and Sky Bet League Two.

He will be assisted by Nick Greenhalgh and Adrian Waters with Sam Allison acting as fourth official.