The Sky Blues travel to East Yorkshire to face Hull City at the MKM Stadium in the Sky Bet Championship this Saturday. Here’s everything you need to know about our opponents. 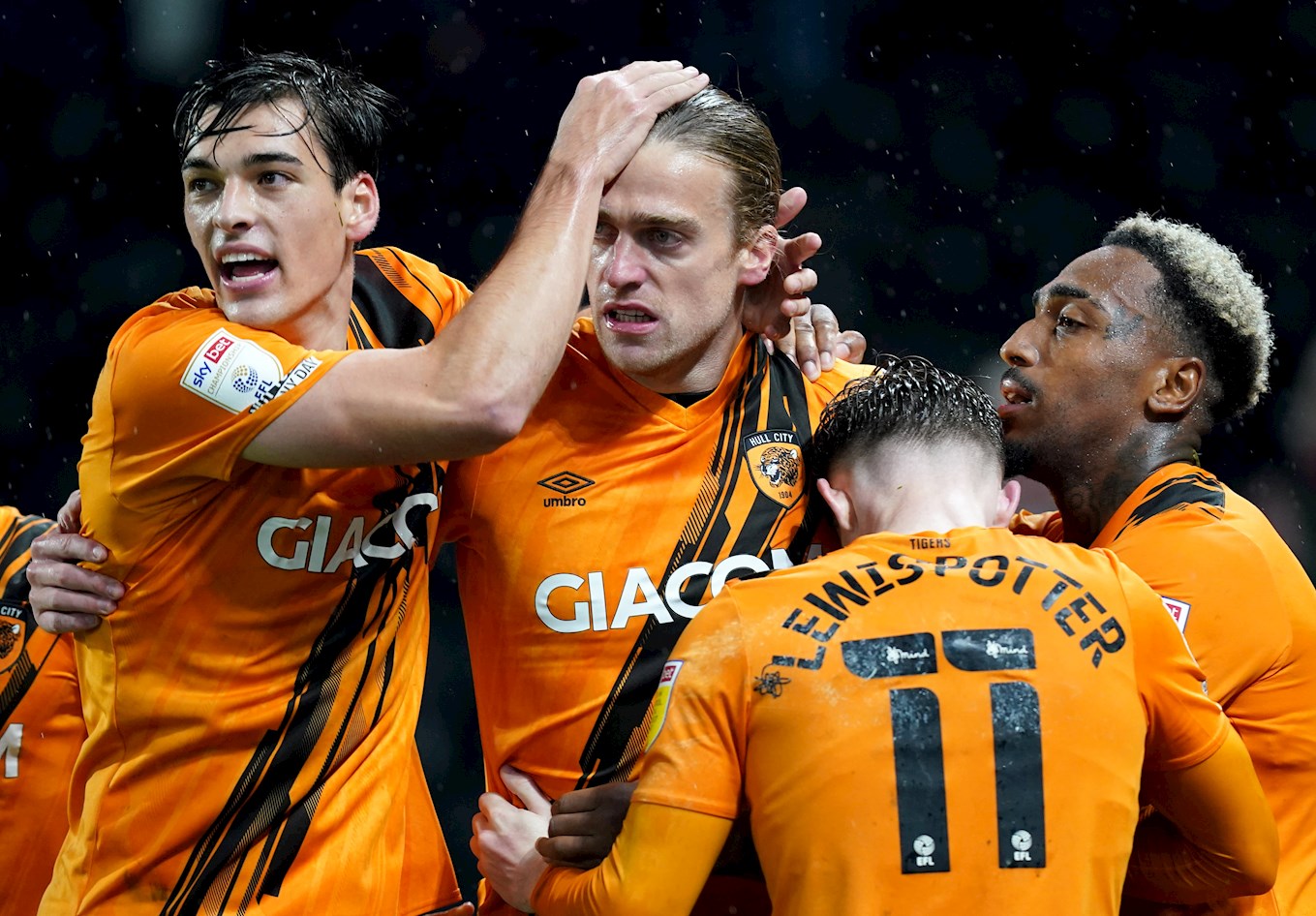 Hull City currently find themselves in the bottom three of the Sky Bet Championship having only won once since their opening day 4-1 win against Preston North End at Deepdale.

A Premier League club as recently as 2017, Hull were promoted last season from League One as champions and announced that the stadium was being renamed to the MKM Stadium in June.

Grant McCann brought in 10 new players to the club over the summer, including George Moncur from Luton Town, Andy Cannon from Portsmouth, and Tom Huddlestone, who rejoined the club from Derby and featured in an FA Cup Final for the Tigers first time around.

Since the Preston game, Hull’s only victory came against Middlesbrough at the beginning of the month whilst they have also picked up credible draws with top of the table AFC Bournemouth, in form Blackpool and on the road at Swansea.

Keane Lewis-Potter and Josh Magennis are the joint highest scorers for the Humberside club with two goals apiece, although Lewis-Potter does have an additional strike in the Carabao Cup, with four players tied on one league goal plus an own goal making up their tally. 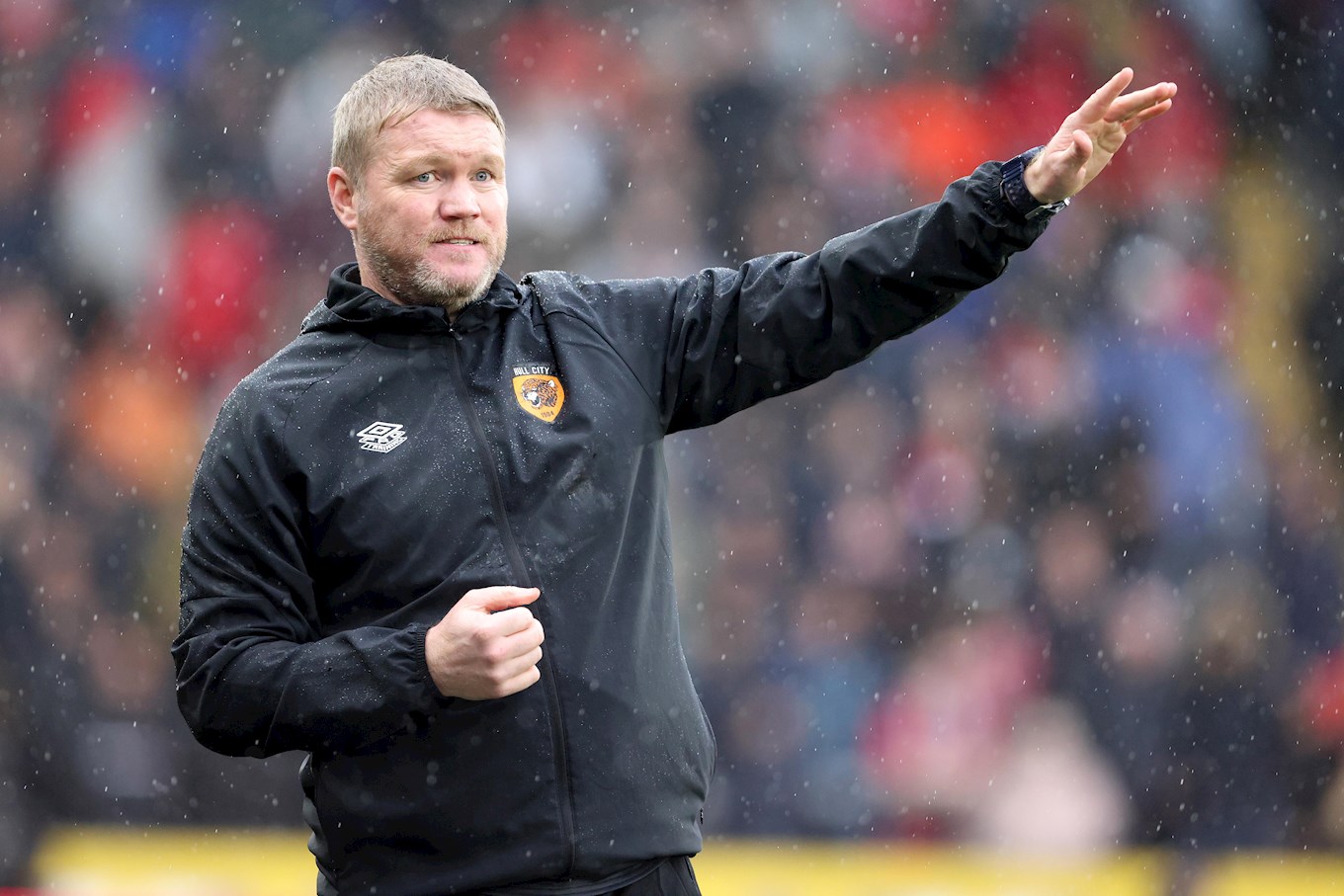 After loan spells at Livingston, Notts County and two spells at Cheltenham Town, he joined the Whaddon Road club permanently in January 2003 for a record fee of £50,000.

Whilst in Gloucestershire he earned promotion to League One through the Play-Offs in 2005/06, playing the full 90 as The Robins beat Grimsby Town at the Millennium Stadium.

He made the step up to the Championship halfway through the 2006/07 season and scored an injury time winner against Ipswich Town on his debut.

The next season he moved across the Championship in January 2008 to Scunthorpe United where he was relegated from and then promoted back to the division with another Play-Off victory, this time at Wembley against Millwall.

After missing only four games in the whole of 2009/10 Championship season with the Iron he departed for Peterborough United where he would earn promotion through the Play-Offs for a third time, defeating Huddersfield Town at Old Trafford.

McCann racked up 81 second tier appearances for Peterborough before departing in 2015 after playing 186 games in total, scoring 35 times for the London Road club.

He appropriately ended his career in Linfield of Northern Ireland, in the country he had earned 39 caps for over an eleven-year international career, scoring against Liechtenstein, San Marino twice and Israel.

McCann returned to Peterborough to begin his coaching role in 2015 and was briefly caretaker that September before being given the job full time in the spring of 2016 and leading Posh to 11th place finish before being dismissed after a run of seven games without a win in February 2018.

He took over Doncaster Rovers in June 2018 and led them to the FA Cup Fifth Round for the first time since 1956 as well as making the Play-Offs in his only season in charge where they lost to Charlton Athletic on penalties after the two legs finished 4-4 on aggregate.

At the end of that season, he crossed from South Yorkshire to East Yorkshire and took up the reigns of Hull City and despite having them eighth in the table on New Year’s Day they were relegated on the final day of the season.

Last season however McCann and his team responded by winning the League One title, going unbeaten from February to May to finish on 89 points and began their return to the second tier with a 4-1 victory at Deepdale.

Over his time at the MKM Stadium, McCann has managed 122 matches recording 47 wins, 27 draws and 48 defeats. 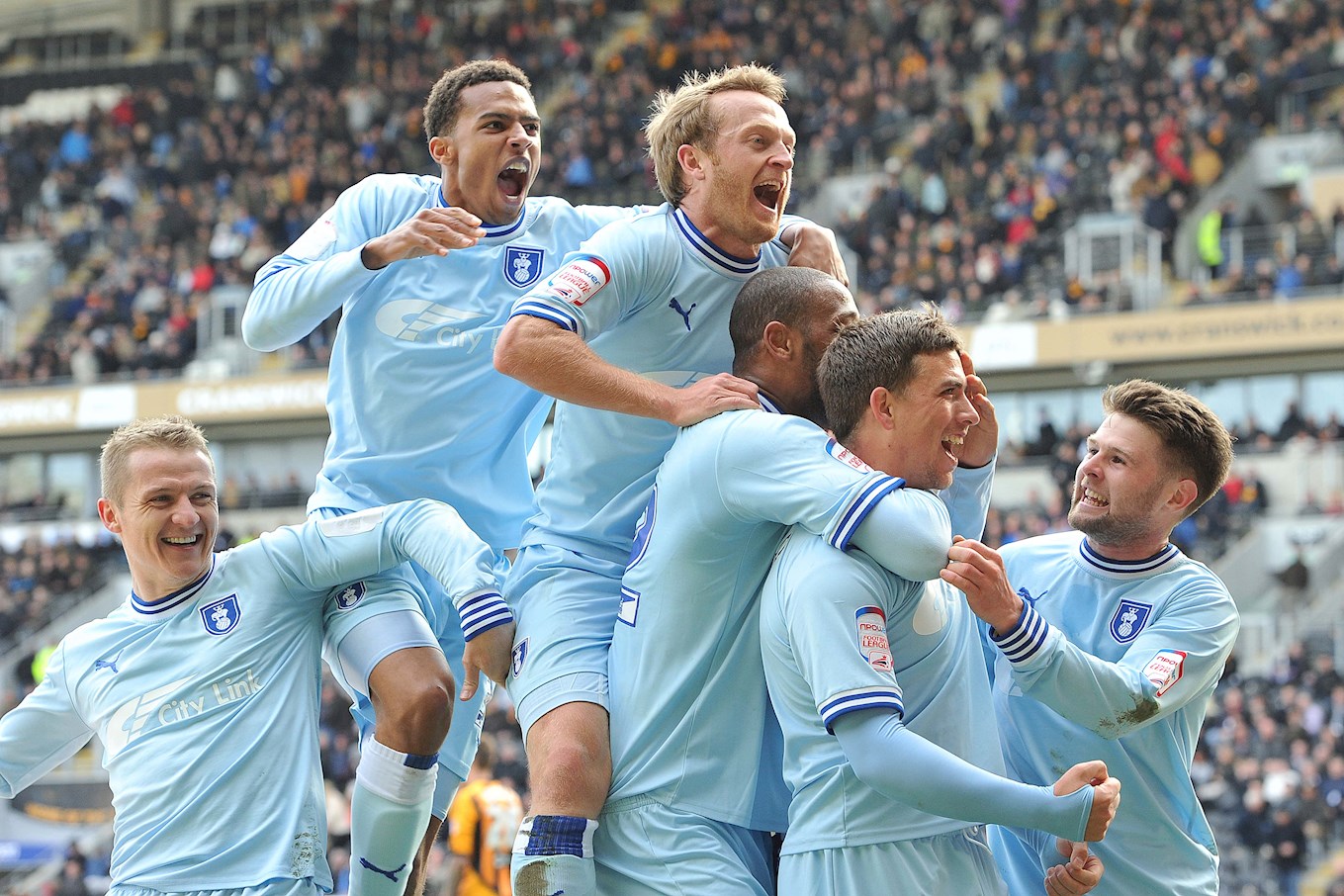 The two sides last met in March 2012, with the Sky Blue winning 2-0 at the MKM Stadium in the Sky Bet Championship.

The home side were denied by Joe Murphy in the early exchanges, with the Irish ‘keeper denying both Matty Fryatt and Robbie Brady with good saves.

But it was City who took the lead in the 13th minute when Sammy Clingan’s free kick was headed on target by Richard Keogh but Tigers’ ‘keeper Vito Mannone couldn’t hold on to the ball and in his attempt to clear Liam Cooper could only find the back of his own net with an attempted clearance.

Alex Nimely then hit the angle of bar and post ten minutes before half time before Gary McSheffrey forced Mannone into another save.

Liam Rosenior had a shot blocked by Martin Cranie before McLean then sprang Murphy into action.

Cody McDonald came off the bench and after Mannone denied the striker, another effort four minutes from time made the game safe to give Andy Thorn’s side their first away win of the season. 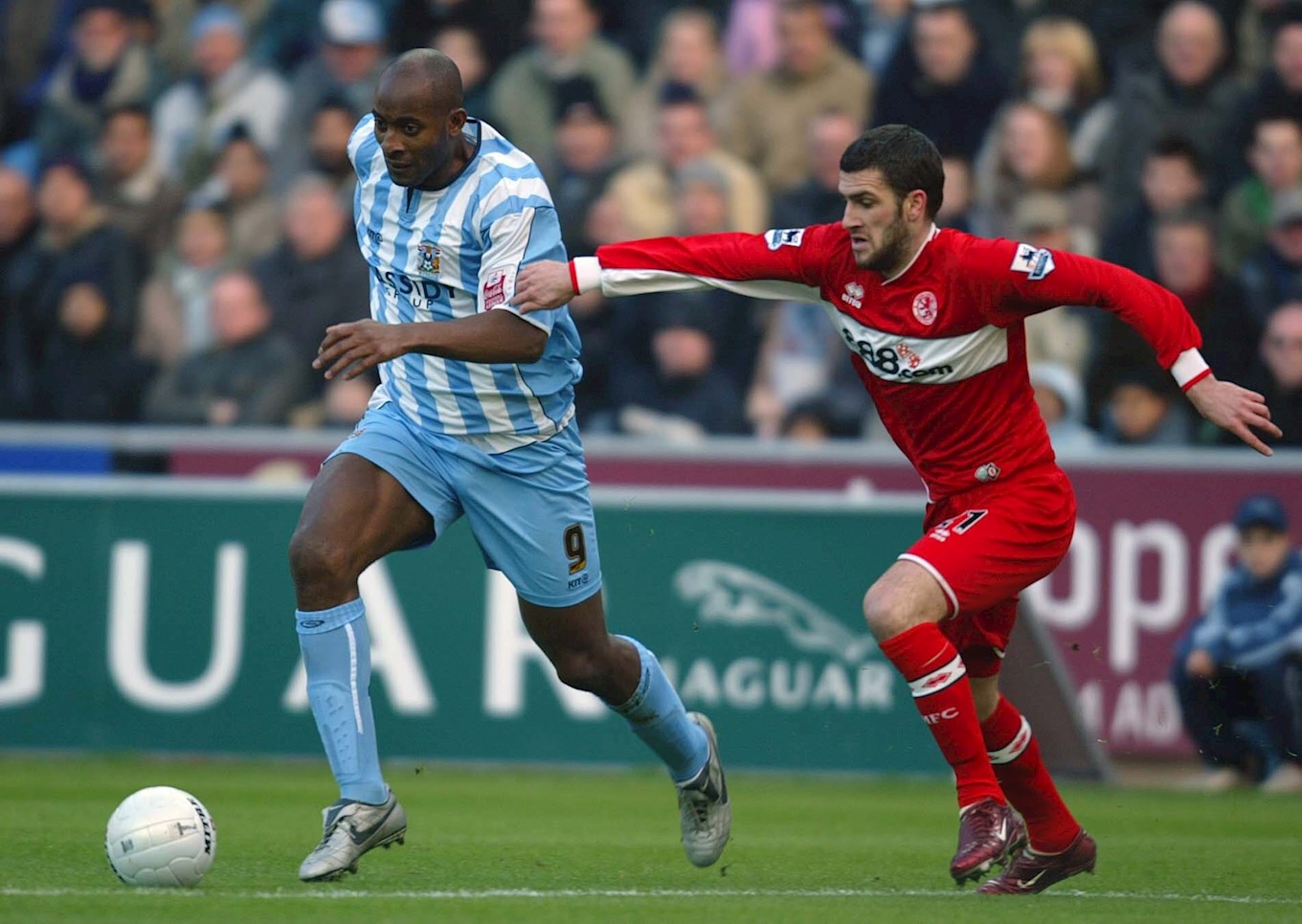 Adebola began his career at Crewe Alexandra in 1992/93 and, after loan spells at Bangor City and Northwich Victoria, he found the back of net 16 times as the Railwayman earned promotion to the second tier.

After seven goals by February Adebola attracted the attention of Trevor Francis, who spent £1 million to take him to Birmingham City.

Whilst at Blues he reached the 2001 League Cup Final, but they lost on penalties to Liverpool, and after brief loan spell at Oldham Athletic and a season at Crystal Palace, where he was reunited with Francis, he joined Coventry City in 2003.

After loan spells at Burnley and Bradford City Peter Reid put Adebola back in the side, linking up well with Gary McSheffrey, and he scored six goals before doubling his tally the next season in the first season at the Coventry Building Society Arena, scoring twice in the first match there against Queens Park Rangers.

He also netted the only goal of the game in wins over Luton Town, Burnley and Stoke City as the Sky Blues finished eighth in the Championship.

He scored nine goals the following season before departing midway through the 2007/08 season for Bristol City, who lost in that year’s Championship Play-Off Final against Hull City.

Ten goals the following season earned Adebola a move to Nottingham Forest and featured 70 times whilst at the City Ground.

Summer 2011 saw the experienced forward arrive Hull City and he made his debut for them on the opening day of the season against Blackpool, and featured in wins over Ipswich Town, Watford and former club Nottingham Forest before joining Notts County on loan for the last two months of the season.

2012/13 was Adebola’s last season in the Football League and he scored six times in 26 matches for Rochdale, ending season with two months at Wrexham.

He ended his almost two-decade long career with 450 league starts, making an additional 199 appearances off the bench and scored 138 times. 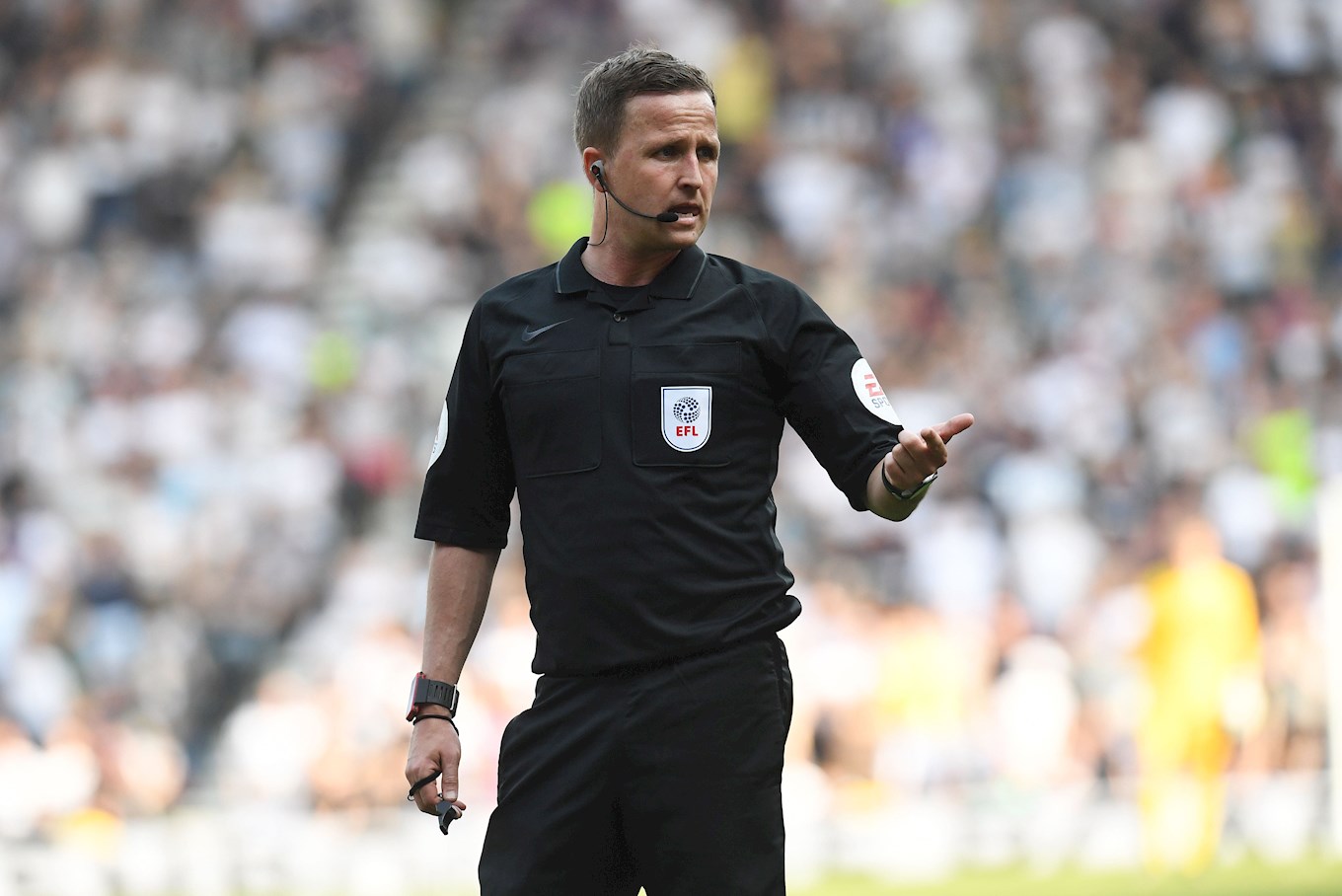 David Webb will be the man in the middle for the match with Hull City.

It will be the second time this season he will officiate a Sky Blues match, after overseeing the 2-1 win over Reading in August.

So far this season, Webb has awarded 56 yellow cards and one red card in his 9 Sky Bet Championship, 2 Sky Bet League One and 2 Carabao Cup matches.

Webb will be assisted by Steven Meredith and Michael George whilst Neil Hair will act as the fourth official.