The Sky Blues face a trip to Lancashire to face Blackburn Rovers at Ewood Park this Saturday in the Sky Bet Championship. Here’s everything you need to know about our opponents. 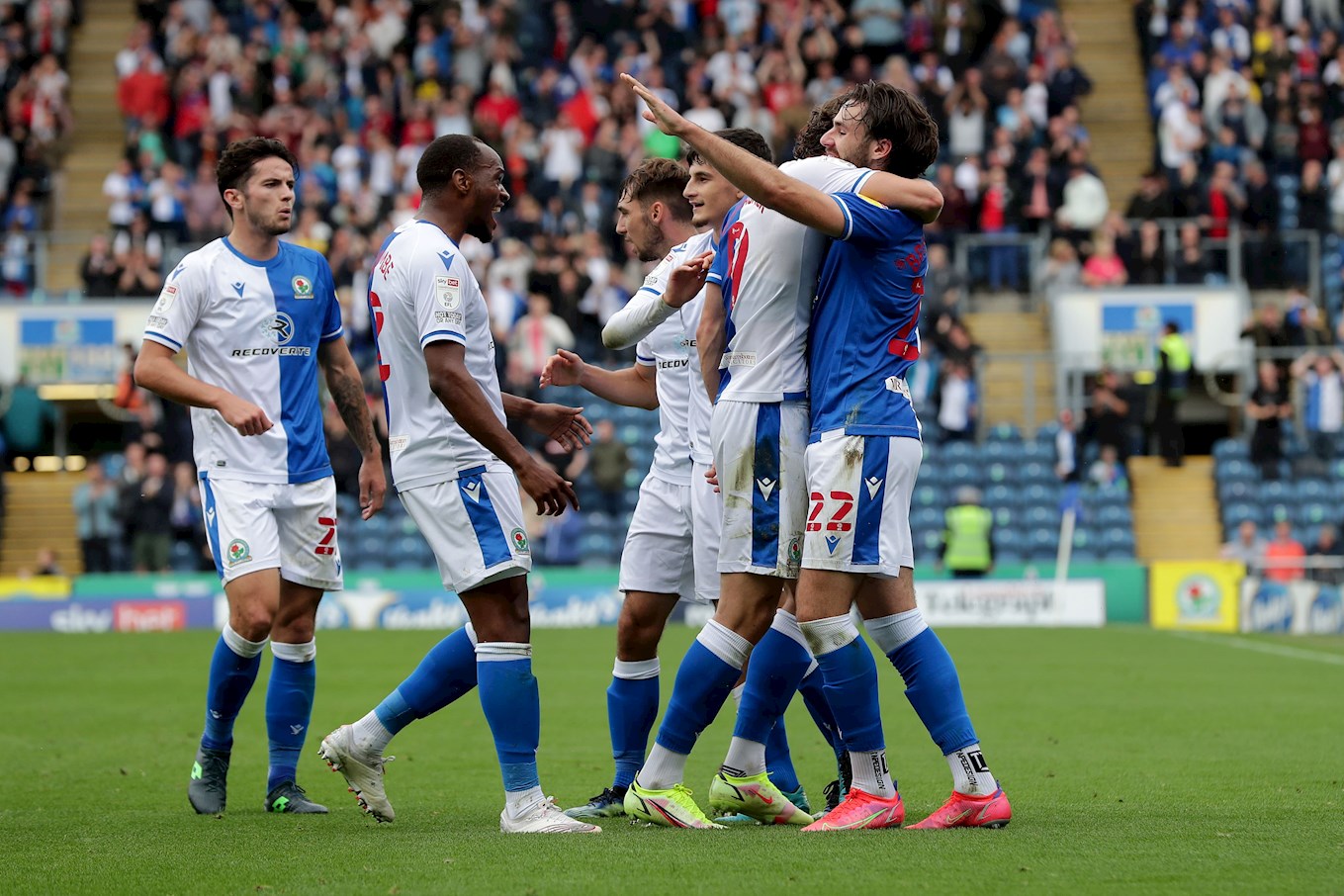 Blackburn Rovers currently sit 8th in the Championship, coming off back-to-back defeats at Huddersfield Town and Blackpool to leave them two points off the play-offs in their fourth successive season back in the second tier.

Last season Rovers finished one place above the Sky Blues in a campaign where an unbeaten January saw Tony Mowbray’s side flirt with the play-offs before a run of one win in sixteen games saw them fall down the table.

This summer saw the departure of top scorer Adam Armstrong, after the forward netted 29 goals in all comps last season, to Southampton for £15 million as well as seven-goal loanee Harvey Elliott returning to Liverpool.

Leighton Clarkson will hopt to have the same impact as Elliott at Ewood Park and he is joined by Ian Poveda from Leeds United and Reda Khadra from Brighton and Hove Albion on season long loan in Lancashire.

Blackburn only lost once in their opening nine league games, to West Brom, with their last home outing being a 5-1 thrashing of Cardiff City but those back-to-back defeats have seen them slip out of the top six of late.

Only Baggies have scored more goals than Rovers’ 19 so far this term, with no small part being played by their Chile international Ben Bereton-Diaz who is the joint top scorer in the league with ten, enjoying his fourth season at Ewood Park.

Sam Gallagher and Tyrhys Dolan have both found the net on three occasions with Joe Rothwell leading the Rover’s assist chart with the same tally. 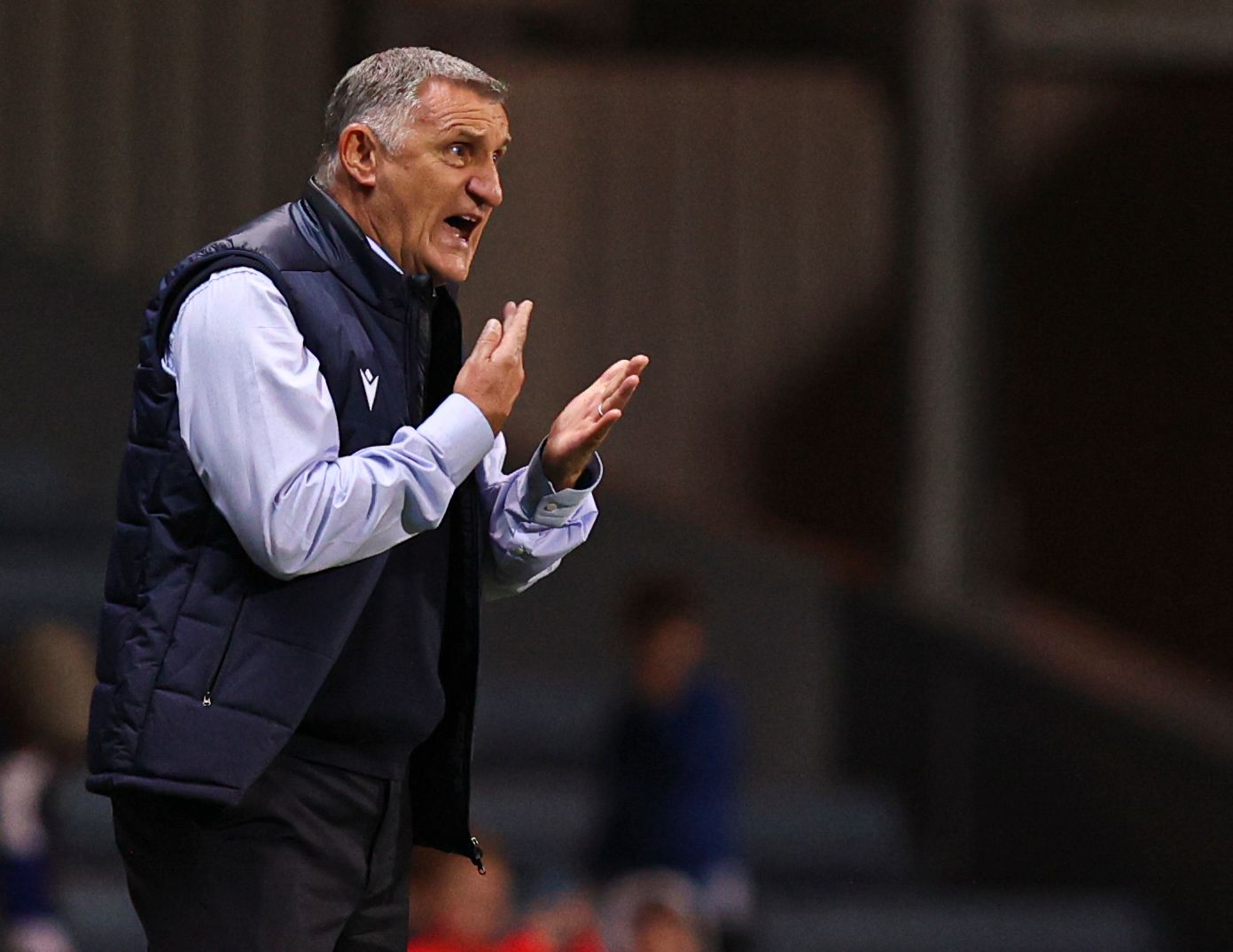 Tony Mowbray had an 18-year playing career, winning promotions with Middlesbrough and Ipswich Town in between a four year spell at Celtic in the early ‘90s before having a brief spell as caretaker boss of the Tractor Boys in October 2002.

May 2004 would see Mowbray be given his first permanent role in management at Hibernian, beginning a successful two year stay at Easter Road where he achieved two top four finishes and European qualification as well as winning the Scottish Football Writers’ Association Manager of the Year for 2004/05.

These achievements won Mowbray admirers south of the border and in October 2006 he departed the Scottish capital for recently relegated West Bromwich Albion to replace Bryan Robson after the Baggies had made an indifferent start to the season however, that year would end in Wembley heartbreak with play-off final defeat to Derby County.

2007/08 proved a different story however and with the help of 24 goals from the ever green Kevin Phillips the Baggies won the Championship and reached the first FA Cup Semi Final at the ‘new’ Wembley where they lost to eventual winners Portsmouth.

The next season proved a struggle in the Black Country and after relegation Mowbray departed for Celtic. An unsuccessful spell at Parkhead saw Mowbray depart in March 2010.

Mowbray’s next job saw him succeed for a second successive time Gordon Strachan, this time at Middlesbrough in the October and after arriving with the team in the relegation zone he led to them a very respectable 12th place finish after ending the campaign with four successive wins.

Boro improved on this the next season where a seventh placed finish saw them miss out on the play offs by five points and sixteen games into the 2012/13 season saw the Teessiders go top of the league by only three wins after the New Year saw them fade away with Mowbray departing the Riverside Stadium in October 2013.

March 2015 saw Mowbray join the Sky Blues and given the brief of keeping City in League One. Five big wins, including away at Crawley on the final day saw Mowbray complete his mission before he went about building a side to fight for promotion which included the additions of Adam Armstrong, Jacob Murphy and Ryan Kent.

A fine start to the season saw City top of the table at the start of December but a run of 2 wins in 16 ultimately cost the Sky Blues and even four wins from the last five games saw Mowbray’s team finish five points off the play offs but a winless start to the next season saw Mowbray depart with a win ratio of 34.2%.

The 57 year old was appointed Rovers boss in February 2017, tasked with keeping the Lancashire club in the Championship and despite an unbeaten last five games of the season, Rovers were relegated on the final day.

They bounced straight back the next season only losing five times and Mowbray has established them back in the second tier with 15th, 11th and 15th placed finishes with them firmly in the hunt for the play offs at the time of writing.

Over his time at Ewood Park, Mowbray has managed 231 matches recording 93 wins, 62 draws and 76 defeats. 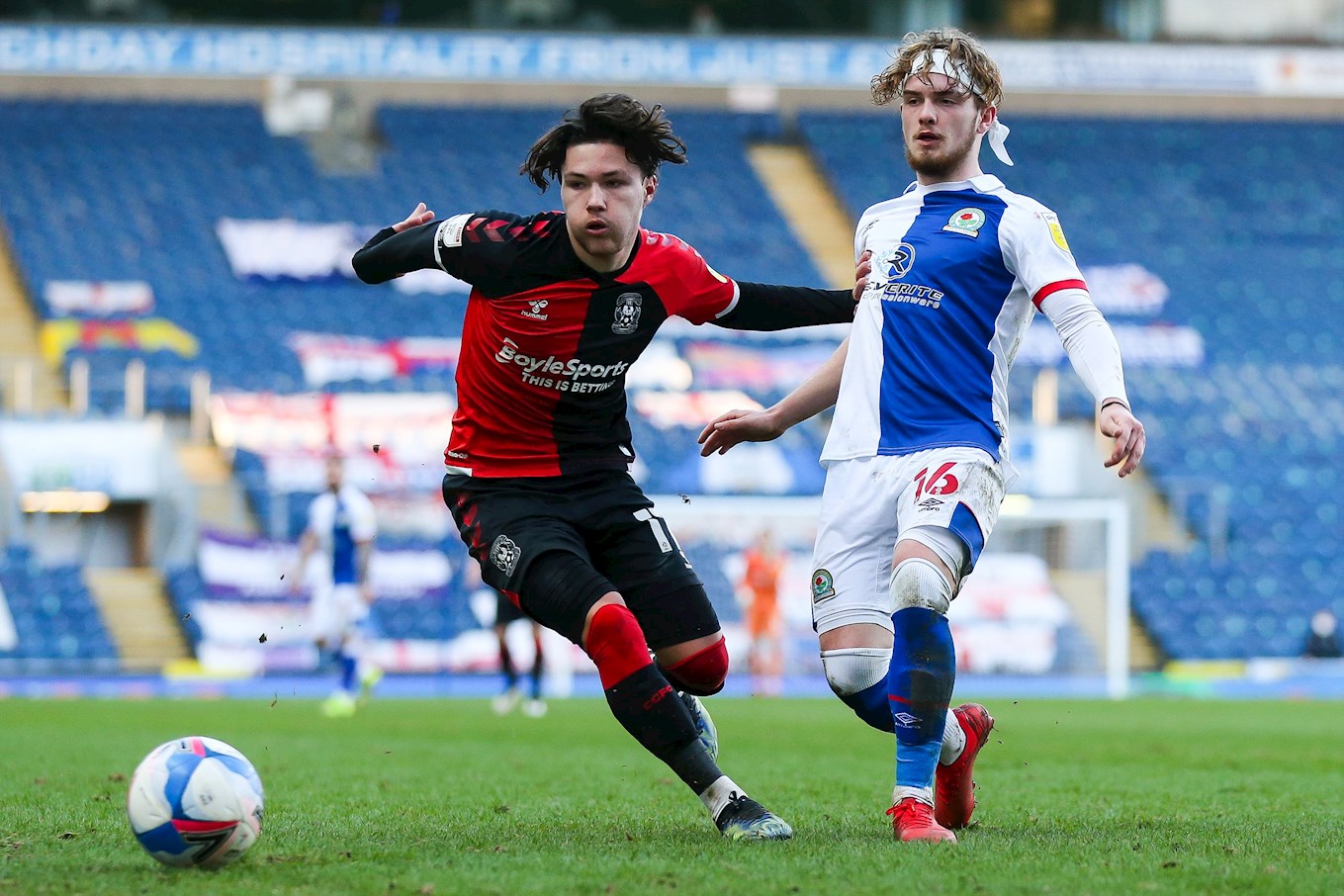 The two sides last met in February 2021, sharing a 1- draw in Lancashire in the Sky Bet Championship.

The Sky Blues hit the bar inside 20 seconds from Sam McCallum’s cross before Jordan Shipley couldn’t keep his half volley down.

The home side took the lead on 27 minutes when Ryan Nyambe’s cross was put in by Ben Bereton-Diaz.

City came out of the blocks second half and were rewarded when Matty James shot into the left hand corner of the goal to equalise.

There were few chances for either side after that with Leo Ostigard dismissed with seven minutes to play but Mark Robins' men held on for a point. 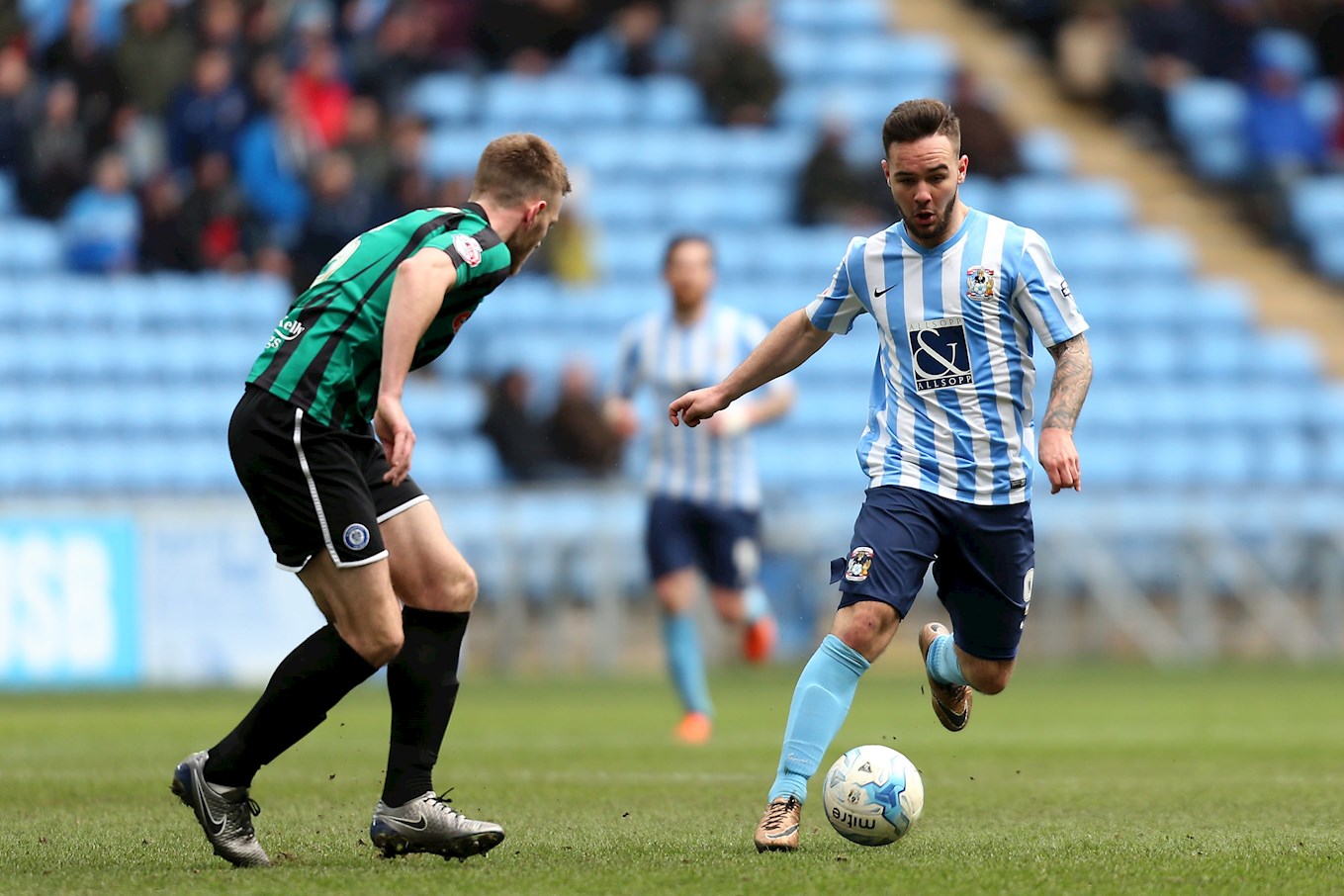 Current Southampton striker Adam Armstrong joined the Sky Blues on an initial youth loan in July 2015 from Newcastle United before leaving them for Blackburn Rovers in 2018, going on to play 160 times in the Blue and White of Rovers until departing this summer for the South Coast.

Armstrong joined the Magpies academy when he was nine, making his Premier League debut in a defeat at Fulham in March 2014, ending the campaign with four substitute outings.

The next season saw the young forward play 15 games in all competitions, including his first league start against Manchester United at Old Trafford, with his first goal involvement coming against Burnley on New Year’s Day 2015 before joining the Sky Blues later that year.

Armstrong made an instant impact for City, netting five goals in his first three matches including two on his debut in an opening day victory over Wigan Athletic, with his efforts earning him the Player of the Month for August 2015.

The striker’s goals played a big role in seeing City top of the league by December and shortly after his hat trick in a 5-0 win at Crewe Alexandra, Armstrong’s loan was extended to till the end of the season and in total scored 20 times to end the season as the Sky Blues’ top scorer.

Armstrong feature in Newcastle’s first two Championship games of the season before moving across the division to Barnsley where he scored six times, including the winner in a South Yorkshire derby at Rotherham.

2017/18 saw Armstrong begin the season at Bolton before joining Blackburn Rovers in the January and scored nine times to help them out of the third tier.

The next season saw Armstrong net nine before and impressive 17 goal haul in 2019/20.

Last season proved to be Armstrong’s last in the blue and white netting six goals in his first games that included his first hat trick of the season against Wycombe Wanderers.

He ended the season in fine form grabbing hat tricks in 5-2 home wins against Huddersfield Town and Birmingham City to finish on 29 goals before his big money move to the South Coast, where he scored on his debut against Everton in August. 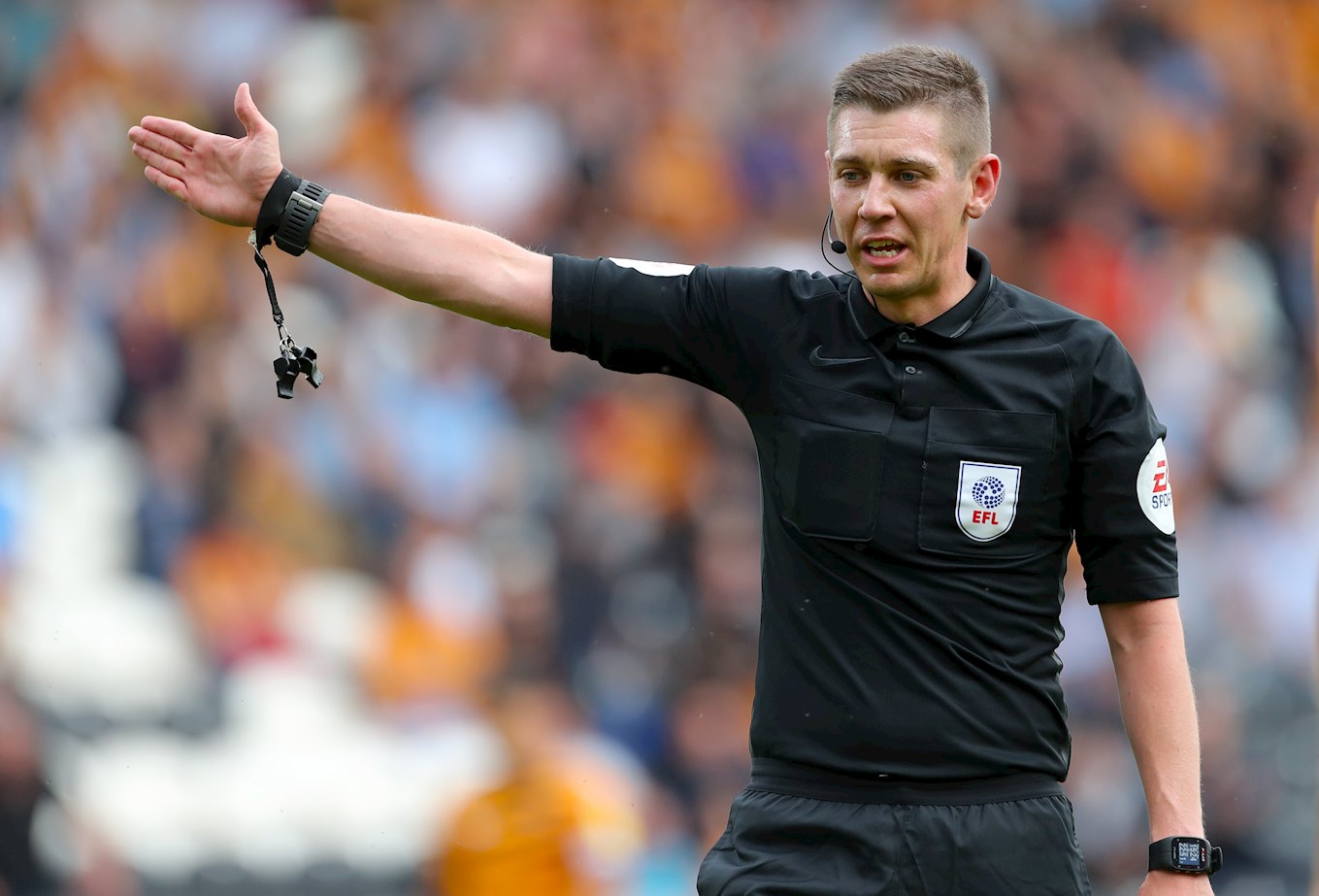 Matthew Donohue will be the man in the middle of the Sky Blues clash with Blackburn Rovers this weekend.

This will be only the second time Donohue has officiated the Sky Blues, with his only previout outing coming a 1-0 defeat to Burton Albion at the Pirelli Stadium in November 2018.

So far this season, Donohue has awarded 20 yellow cards and three red cards in the seven games he has officiated across the Sky Bet Championship and EFL Cup.

Donohue will be assisted by Richard Wild and Geoffrey Liddle whilst Thomas Bramall will act as the fourth official.