After looking back on some of our players from the 1980s as part of Black History Month, today we turn our attentions to two of our stars from the 1990s.

With the breakthroughs made by the players in the previous decade, the 1990s saw a significant rise in the representation of black players whilst perceptions were changing of English football at the time with the coming of the Premier League and the arrival of some of the most iconic players of recent times.

After 15th and 11th placed finishes in the new league, the Sky Blues began 1994/95 with only one point from their opening four games and with City in desperate need of goals Phil Neal dipped, or rather splashed, into the market to sign Manchester United’s Dion Dublin for a club record fee of £2 million.

The 25-year-old striker made an instant impact with City 2-1 down at QPR, then he popped up with six minutes to go to earn a point and lift City off bottom of the league.

Dublin hit a rich vein of form scoring the opener in the first win of the season against Leeds United before netting against Southampton and then in a draw at Leicester.

Dublin netted in wins over Everton and Manchester City in the Autumn but by February Neal had been replaced in the Sky Blues hotseat by Ron Atkinson.

Dublin then netted crucial goals in a draw with Champions elect Blackburn Rovers, and in wins over Sheffield Wednesday and Tottenham Hotspur to secure a 16th place and see him finish his debut season as top scorer with 16 in all competitions.

The forward then scored the winner in City’s first home match the 1995/96 season with just four minutes remaining against Manchester City, however he would pick up a knee injury not long after and his importance to the side was clear, after a 1-0 defeat to Sheffield Wednesday, City had not won any of the eleven games he had missed since joining!

Fit enough to start the next match at Leeds, Dublin went on a run of nine goals in eight games, including a hat trick against the Owls, but the only victory in that run was a 5-0 win over Champions Blackburn, however by this point Dublin had established himself as one of the most feared strikers in the division.

Meanwhile in the third game of Dublin’s run, a 1-1 draw at QPR, Atkinson gave a debut to new signing defender Richard Shaw, who arrived from Crystal Palace for £1 million.

Despite a sending off in a 3-3 draw with Wimbledon, Shaw quickly regained his place in the side and although Dublin would grab the headlines the role Shaw played at the back was never underappreciated by the Sky Blue Army.

In fact, the duo found themselves as unlikely partners when Dublin, who had begun his career as a centre back at Cambridge, reverted back there for the crucial penultimate match of the season away to Wimbledon.

In a must win match in South London the duo kept a clean sheet as Peter Ndlovu struck twice to leave City’s fate in their own hands going into the final day where a 0-0 draw with Leeds secured another year of Premier League football with Shaw avoiding a third successive top flight season ending in relegation.

Dublin had scored an injury time winner at Liverpool the previous month and followed it up with the first in a memorable win over Chelsea at Highfield Road, but a home defeat to Derby in the last home match of the season left the Sky Blues needing a win as Gordon Strachan’s men headed for the capital. 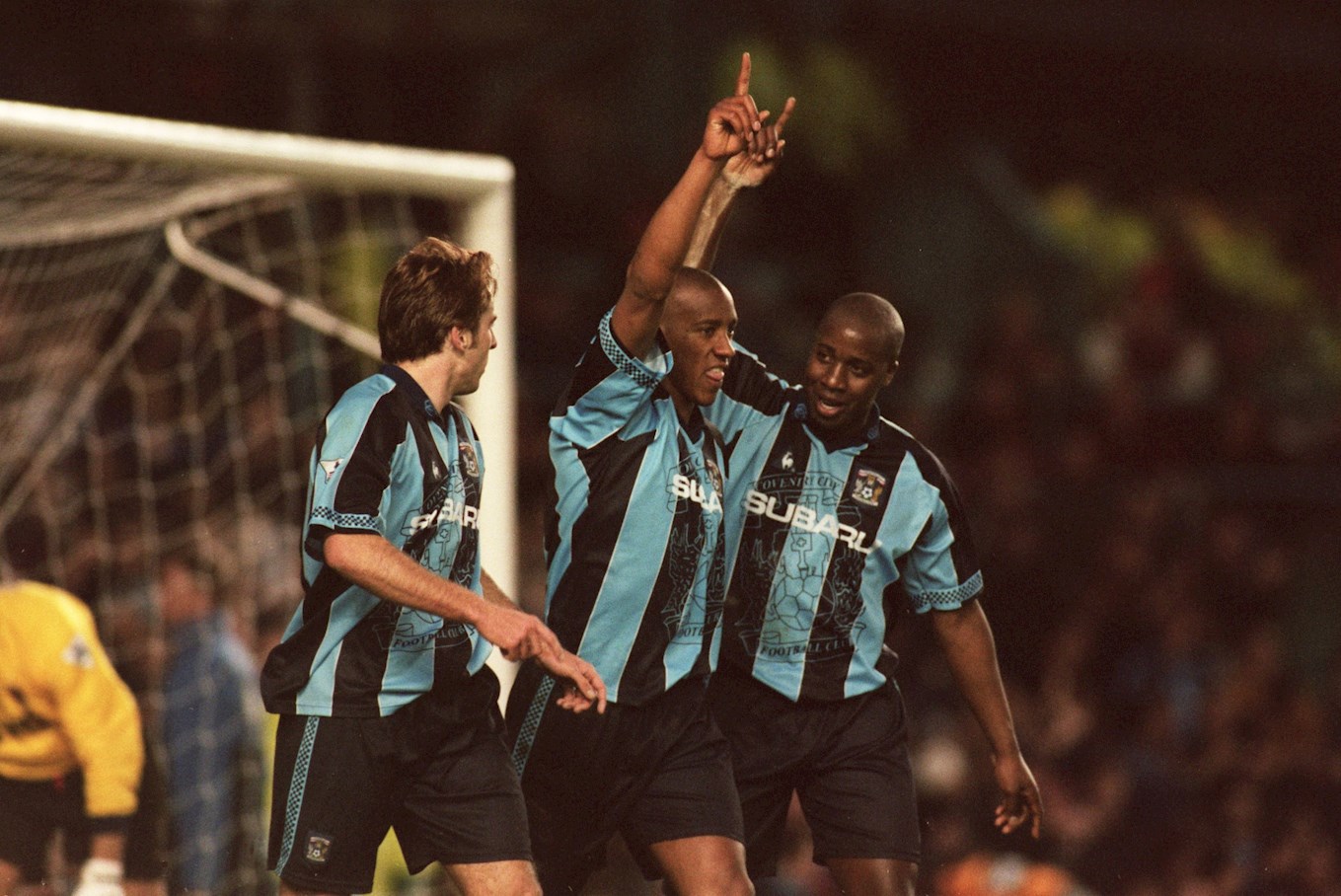 Who else but Dublin would score to put City 1-0 up and then when Paul Williams doubled the lead everything seemed to be going City’s way, but Spurs pulled one back just before half time.

After a nail biting second half the Sky Blues had done enough to survive again, helped by results elsewhere!

1997/98 began in perfect fashion for Dublin with an opening day hat trick against Chelsea which had the Highfield Road faithful in dreamland.

However only one win in the next eleven meant Dublin’s decisive but early goal in a 2-1 win over Wimbledon was a welcome boost but it was in his next game that he would create one of the most memorable moments in Premier League history.

After only four minutes of a home clash with Newcastle, Shay Given rolled the ball out seemingly unaware the striker was behind him, and quick thinking saw the striker run round the Irishman and pass the ball into an empty net!

1997 ended with a famous victory over the Champions, when Manchester United leading 2-1 with four minutes to play, Dublin scored his eighth of the season from the spot before his strike partner Darren Huckerby’s magical goal sent Highfield Road into a frenzy!

After scoring in three successive matches, including in the Sky Blues’ biggest away win since 1959 (5-1 at Bolton), Dublin’s form saw him called up into the England squad in February 1998 and he earned his first cap starting against Chile.

Days after his England debut City travelled to Villa Park for an FA Cup Fifth Round tie after Dublin goals had help eliminate Liverpool and Derby County.

Viorel Moldovan scored City’s first ever winner at the home of the Villains.

The run in the cup, coincided with an up turn in form over the spring which saw Strachan’s team comfortably avoid a relegation battle but they were denied a chance to repeat the 1987 success with a 6th Round Replay defeat on penalties to Sheffield United.

Dublin’s 89th minute goal in the final game of the season drew him level with Chris Sutton and Michael Owen in the Premier League goalscoring charts with 18, with his season ending with two more England caps but he was harshly overlooked for the 1998 FIFA World Cup Squad.

After three goals in the opening ten games of the next season Dublin departed for Aston Villa with his final goal for the Sky Blues coming in a defeat at Southampton. He went on to feature for Millwall, Leicester City and Celtic before retiring with Norwich City in 2008. 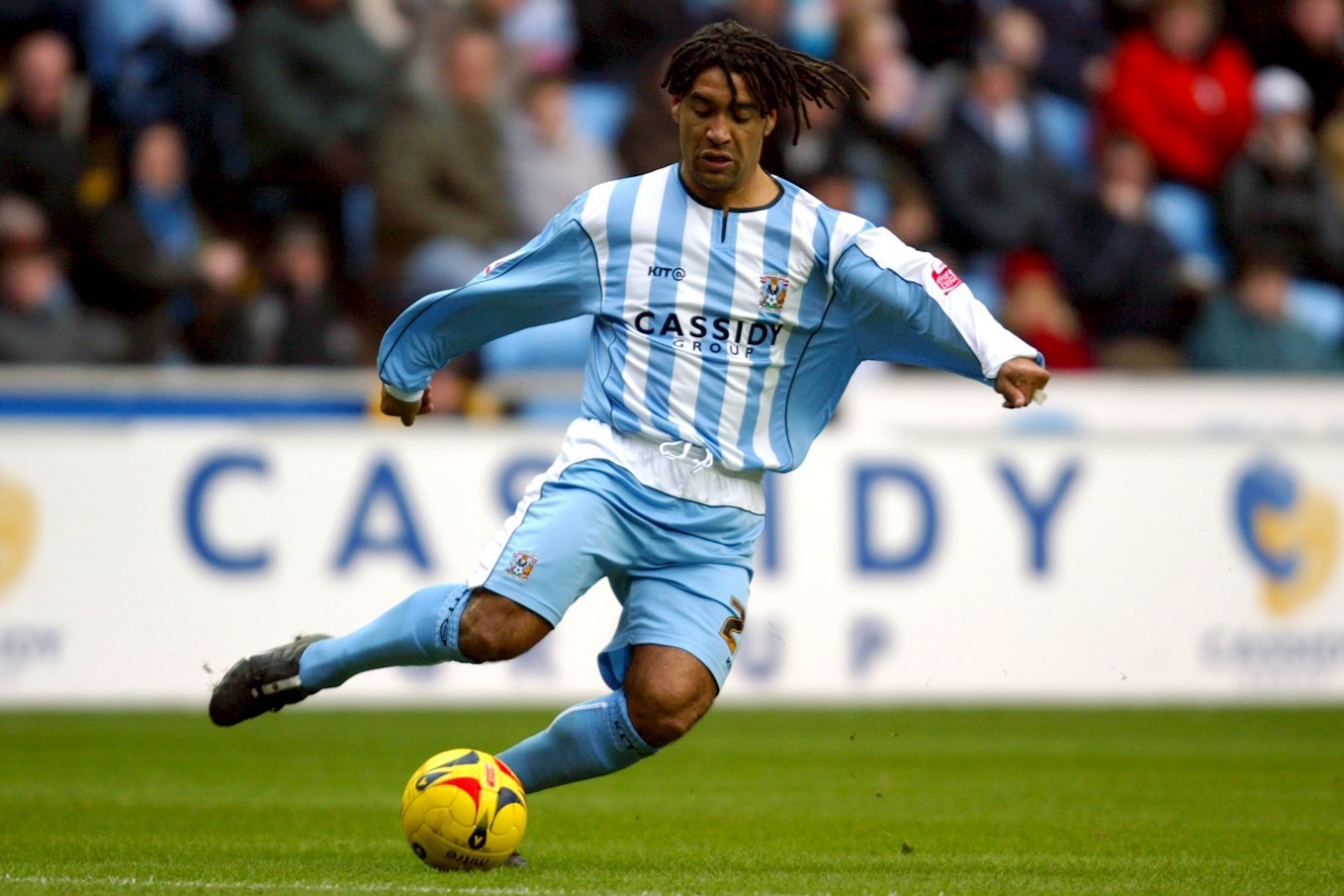 Shaw meanwhile would only miss one game in 1998/99 and he sure was missed in it, a 5-1 loss to Newcastle, with no one featuring more he deservedly won the Player of the Year, an award he earned again in 2001/02.

A reliable defender and tremendous man marker, he would go on to play 362 games for Coventry City in total, memorably scoring his only goal in a 5-2 win at Gillingham in 2004.

Awarded a testimonial in 2006 against Celtic, Shaw would depart City that same year for a two year spell at Millwall.

He would return to Coventry briefly during the 2012/13 season as part of coaching staff and after spending six years coaching Palace's U23s, he joined Watford in January of this year as their Under 23s Assistant Coach.