The Sky Blues host Bristol City this Saturday at the Coventry Building Society Arena in the Sky Bet Championship. Here’s everything you need to know about our opponents. 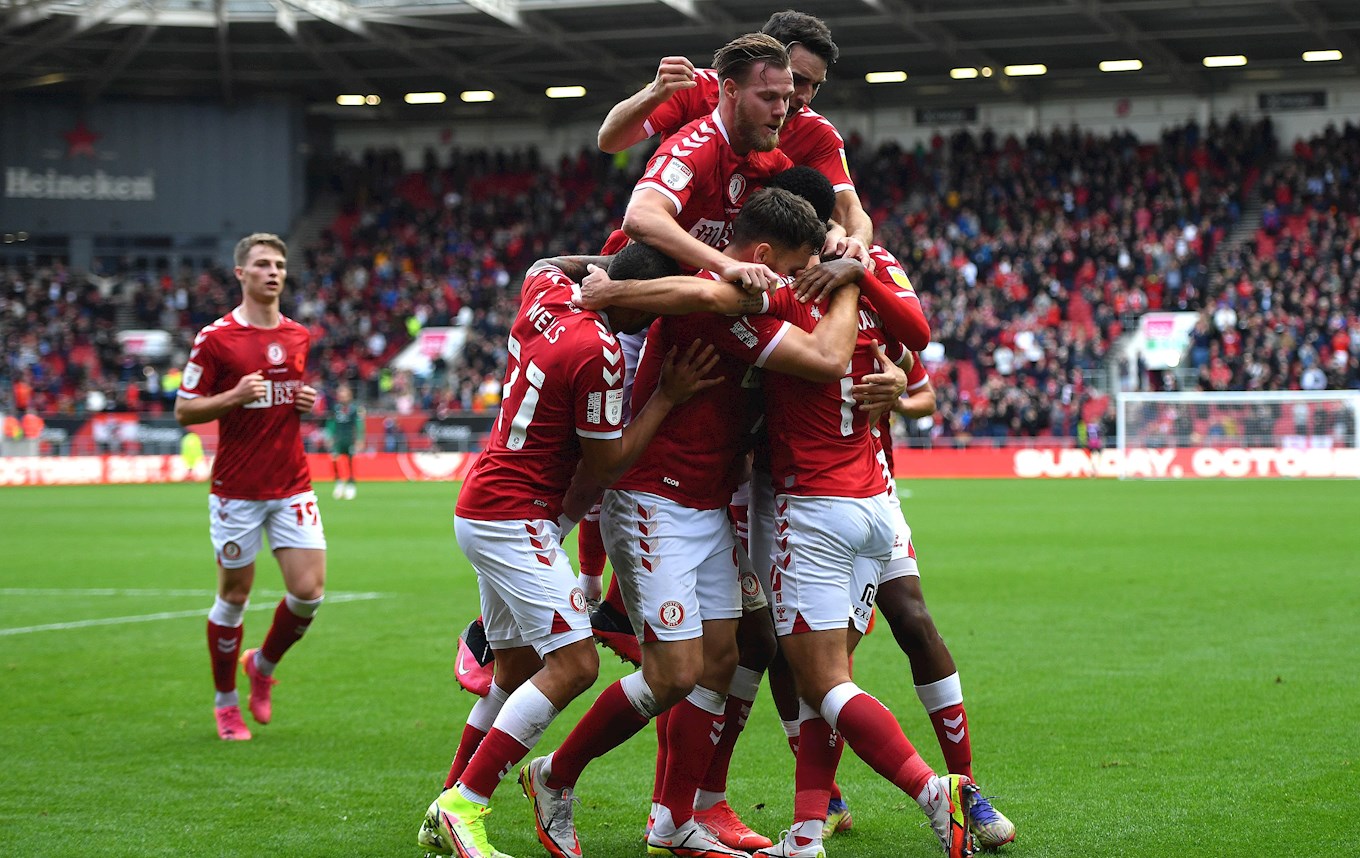 Bristol City currently find themselves 19th in the Sky Bet Championship after their 3-0 defeat at Birmingham on Tuesday.

Incidentally that is the position they finished in last season with there also being 19 permanent departures from Ashton Gate this summer.

Incomings to the club included two of the manager Nigel Pearson’s most trusted players from his time at Leicester City, Matty James and Andy King, arriving on free transfers, as well as Robert Atkinson from Oxford United and George Tanner from Carlisle United.

The Austrian forward now has six goals for the season with former Derby County man Chris Martin next on four with six players all tied on one for league goals including Nahki Wells and Kasey Palmer. 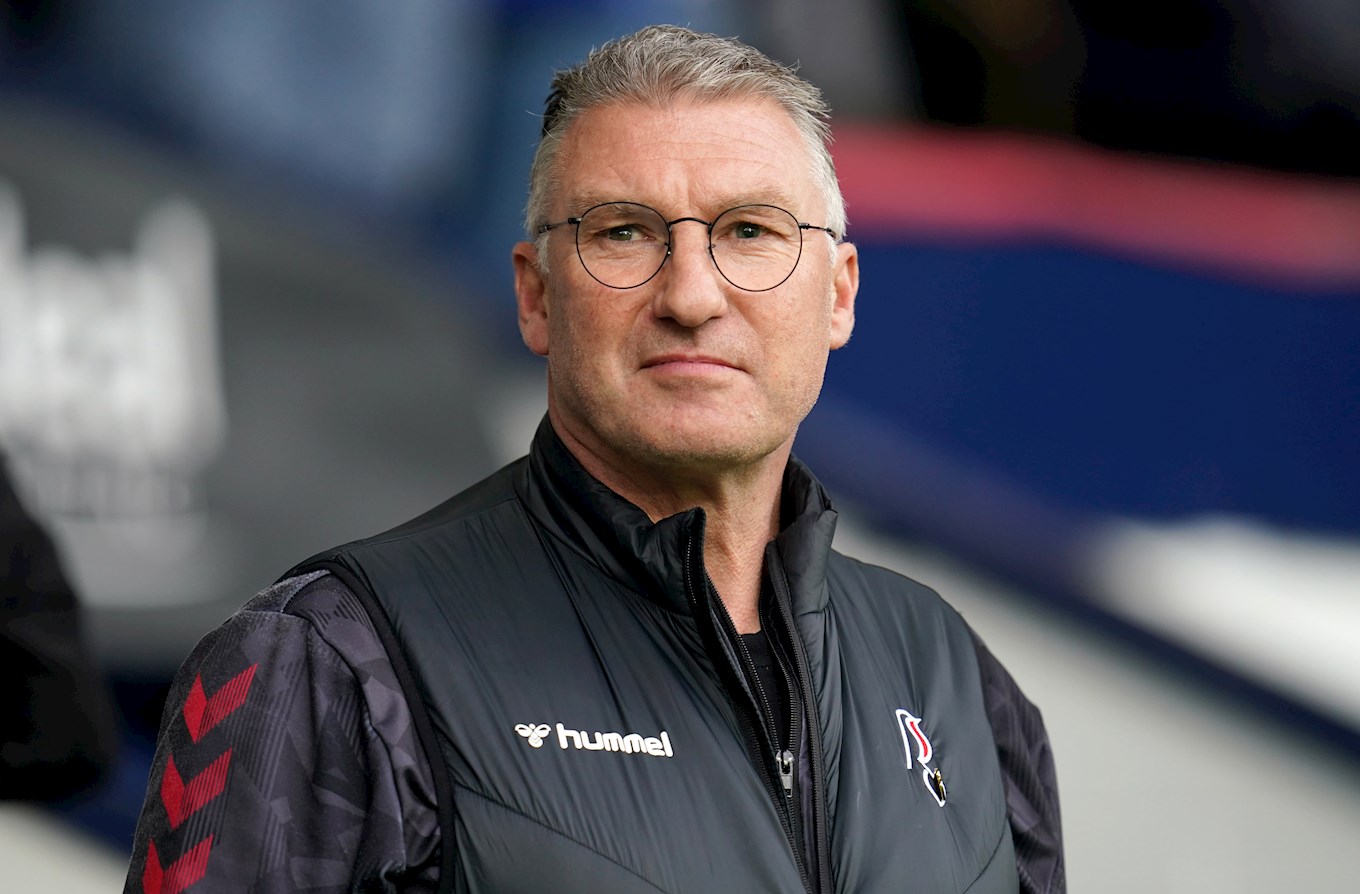 Nottingham born boss Nigel Pearson enjoyed a 17-year playing career, making his professional debut for Shrewsbury Town in 1981 before enjoying successive spells at Sheffield Wednesday and Middlesbrough ahead of embarking on a 23-year managerial career so far.

Pearson begin his time in the managerial hot seat in 1998 with Carlisle United where he was apart of one of the most iconic moments in Football League history, with the Cumbrians deep in relegation trouble, on loan ‘keeper Jimmy Glass scored an injury time winner to preserve the Brunton Park club’s Football League.

Once again, he masterminded a final day victory to secure survival, this time winning 3-2 against Sheffield United in once again his final game in charge as he ended for the East Midlands.

Ironically the Saints’ victory saw Leicester City relegated to the third tier for the first time in their history but that was where Pearson went, charged with getting them out of the division at the first time of asking, which he achieved as League One Champions in 2008/09.

With the Foxes back in the Championship Pearson led them to the Play-Offs, losing on penalties to Cardiff City in the semi finals.

That summer he moved to Hull City and whilst on Humberside he broke the club record for consecutive away games without defeat after ending the club’s wait for an away win of over a year with victory at Carrow Road in September 2010, en route to guiding the Tigers to 11th in the table.

After a bright start to the next season, former club asked to speak to him and he was reappointed Foxes boss in November 2011, finishing 9th in his first season back.

2012/13 saw Pearson guide Leicester to the Play-Offs before losing in the semi final once again in a memorable match at Vicarage Road after Anthony Knockaert’s missed penalty allowed Watford to counter attack and score in the final minute of injury time through Troy Deeney.

The following season saw Pearson guide the Foxes to a record equalling seventh second tier title, only losing six matches over the course of the season and achieving 102 points.

A tough 2014/15 campaign for Leicester back in the top flight saw most write them off after a 4-3 defeat at Tottenham Hotspur left Pearson’s men seven points from safety with only nine games remaining.

An incredible run on seven wins and only one loss in those games saw Pearson steer his side to survival and a 14th place finish but he departed that summer.

He crossed the East Midlands a year later to be Paul Clement’s successor at Derby County however he departed after less than five months in October 2016.

Pearson returned to management with Belgian outfit Oud-Heverlee Leuven in September 2017, leading them to a second place finish in the Belgian First Division B before departing in early 2019.

At the end of that year he was appointed Head Coach of struggling Premier League side Watford and secured seven wins that left the Hertfordshire side outside the relegation zone with two games to go when Pearson was relieved of his duties.

February 2021 was when Pearson returned to the game with current side Bristol City and winning his first game in charge 3-1 at Swansea City with the Robins finishing 19th in the Championship table.

This season he has overseen impressive wins at Reading, Cardiff and QPR in the first two months of the campaign with a five game unbeaten run seeing Bristol City 8th in the table at the end of September and ended their long winless run at home with victory over Barnsley last Saturday.

Over his time at Ashton Gate, Pearson has managed 31 matches recording 7 wins, 8 draws and 16 defeats. 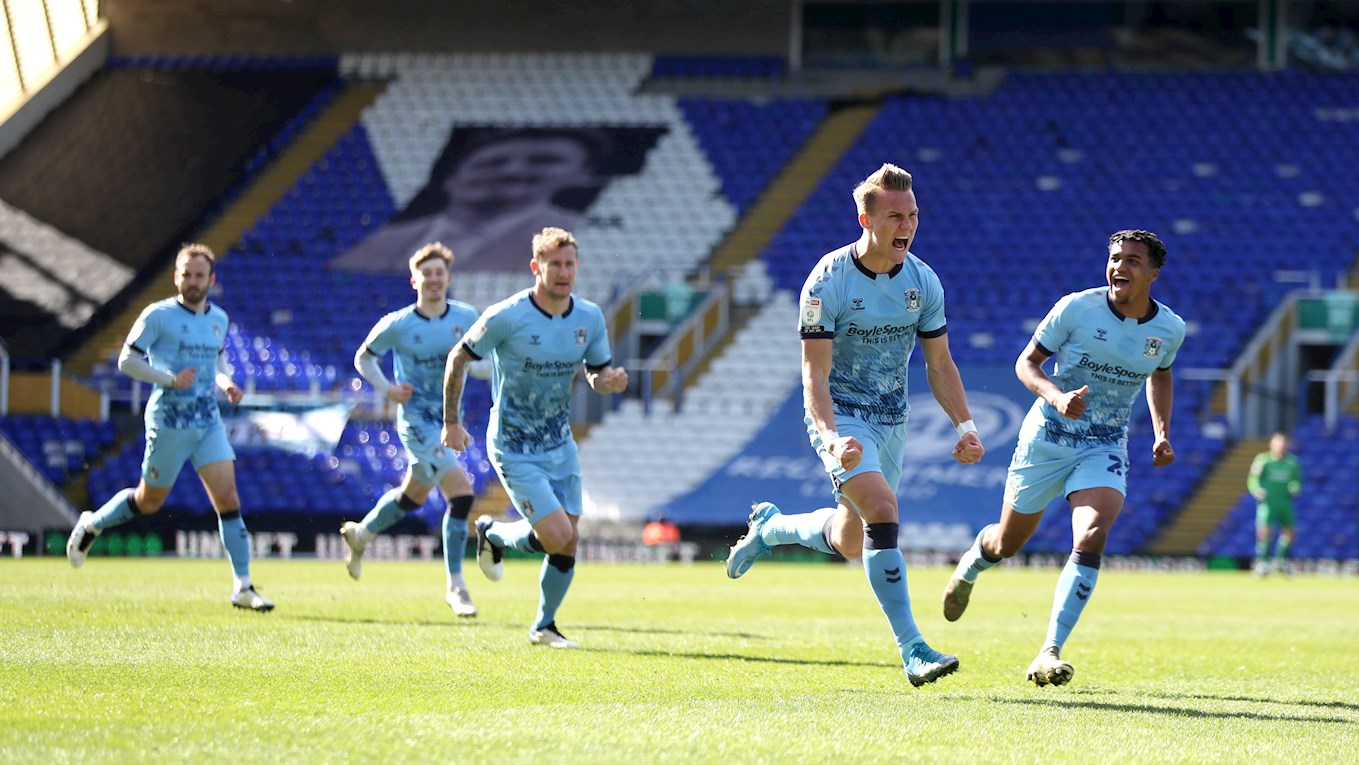 The two sides last met in April 2021, with the Sky Blue winning 3-1 at St Andrews in the Sky Bet Championship.

The bright start made by Mark Robins’ side was rewarded in the ninth minute when Sam McCallum’s throw in found Tyler Walker and although the forward’s shot was blocked, the ball fell to Leo Ostigard who fired in a volley.

Walker’s strike partner Matty Godden then had a shot saved by David Bentley in the Robins’ net who tipped his effort onto the post.

After the break it was the visitors who created the first big chance when Kasey Palmer’s cross almost found Han-Noah Massengo at the back post.

The Robins were left to rue their missed opportunity as Tomas Kalas was adjudged to have brought down Walker with Godden doubling the Sky Blues’ lead from the spot.

A lapse in concentration saw the visitors get back into the game when Nakhi Wells intercepted Kyle McFadzean’s back pass and halved the deficit.

However, with three minutes remaining Callum O’Hare managed to pick out substitute Viktor Gyökeres who calmly finished past Bentley to seal three vital points for City. 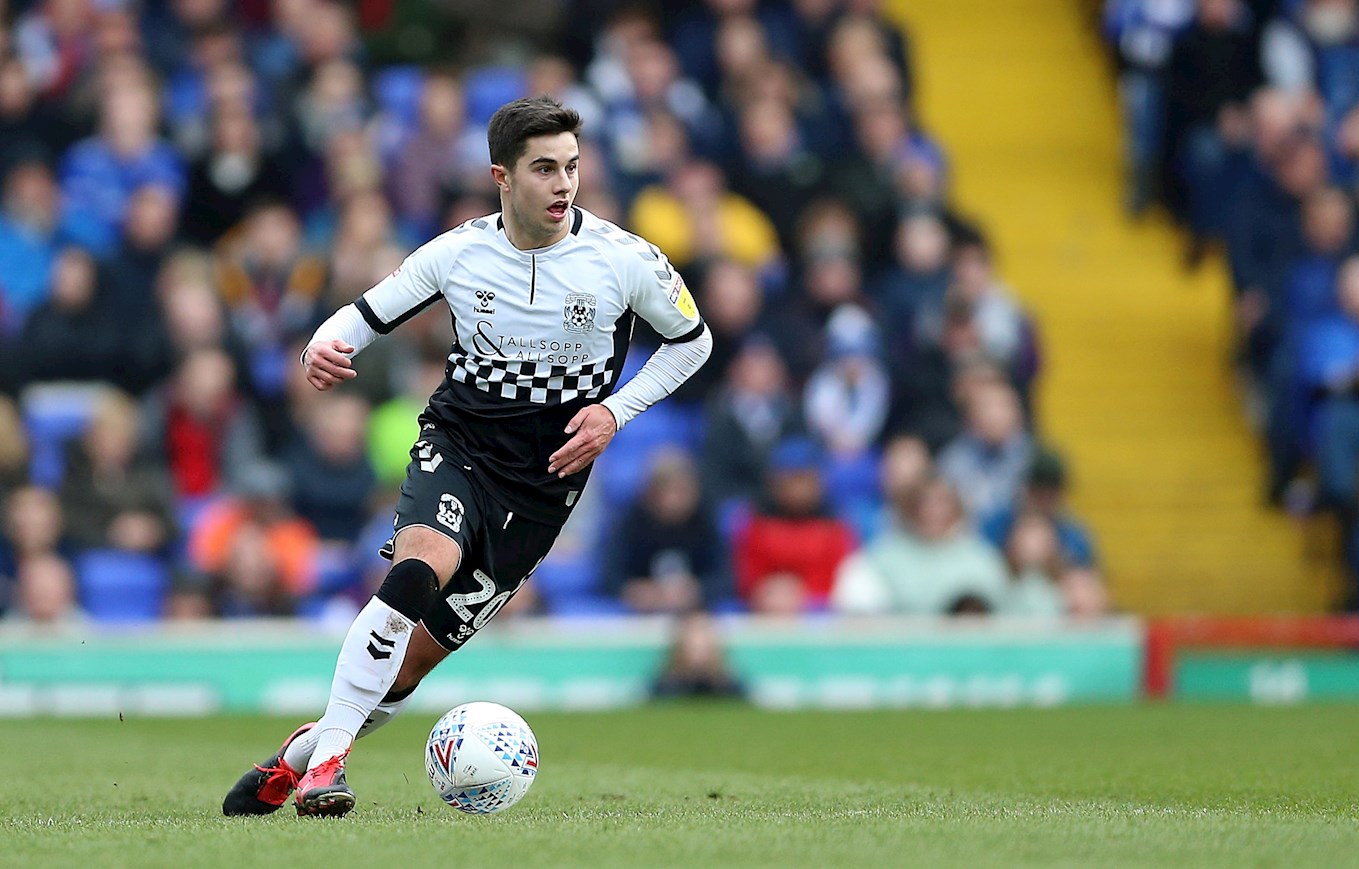 Huyton born midfielder Liam Walsh spent a season on loan with the Sky Blues in 2019/20, making 34 appearances and scoring 4 goals, whilst as a Bristol City player for whom he played 22 times for.

Walsh joined Everton’s Academy as a five-year-old, making the first team matchday squad for the first time against Leeds United in August 2015, having twice played for the England Under 18s previously.

He won the club’s Goal of the Month for that November with a strike from the halfway line against Derby County for the Under 18s before joining Yeovil Town on loan in January 2016, getting his first assist for the club in a 3-2 win over AFC Wimbledon and scoring in a 1-1 draw with Luton Town.

His loan was extended until the end of the season with Walsh featuring 17 times for the Glovers.

After a season with Everton’s Under 23s he joined Championship side Birmingham City for the first half of the 2017/18 campaign, playing three times under Harry Redknapp.

That January saw Walsh head to the West Country joining Lee Johnson’s Bristol City, with his first outing coming in the first leg of their Carabao Cup Semi Final against Manchester City.

He featured ten times the following campaign before scoring a superb free kick in a 3-3 draw at QPR in the Carabao Cup First Round before joining the Sky Blues in August 2019.

Making his debut in a 3-2 victory over Blackpool, Walsh scored an injury time winner against AFC Wimbledon to keep City top of the League One.

He quickly became an integral part of the side and scored what turned out to be the club’s Goal of the Season against Rochdale after running half the pitch and beating four players to earn the Sky Blues another three points!

He would save his other two strikes for the Memorial Stadium, scoring City’s first in a 2-2 draw with Bristol Rovers in the FA Cup Third Round then netting the winner, and grabbing an assist, down there a month later to keep City in the promotion race.

Starting the last 15 league games before the season was curtailed due to Covid-19 and with the Sky Blues confirmed as Champions, Walsh got his hands on the League One Trophy!

Featuring only three times last season for Bristol City, he departed in the Summer of 2021 for Swansea City, making his debut in a 0-0 draw with Millwall however he has only featured on three subsequent occasions so far due to picking up an injury that saw miss the match with City on Tuesday night. 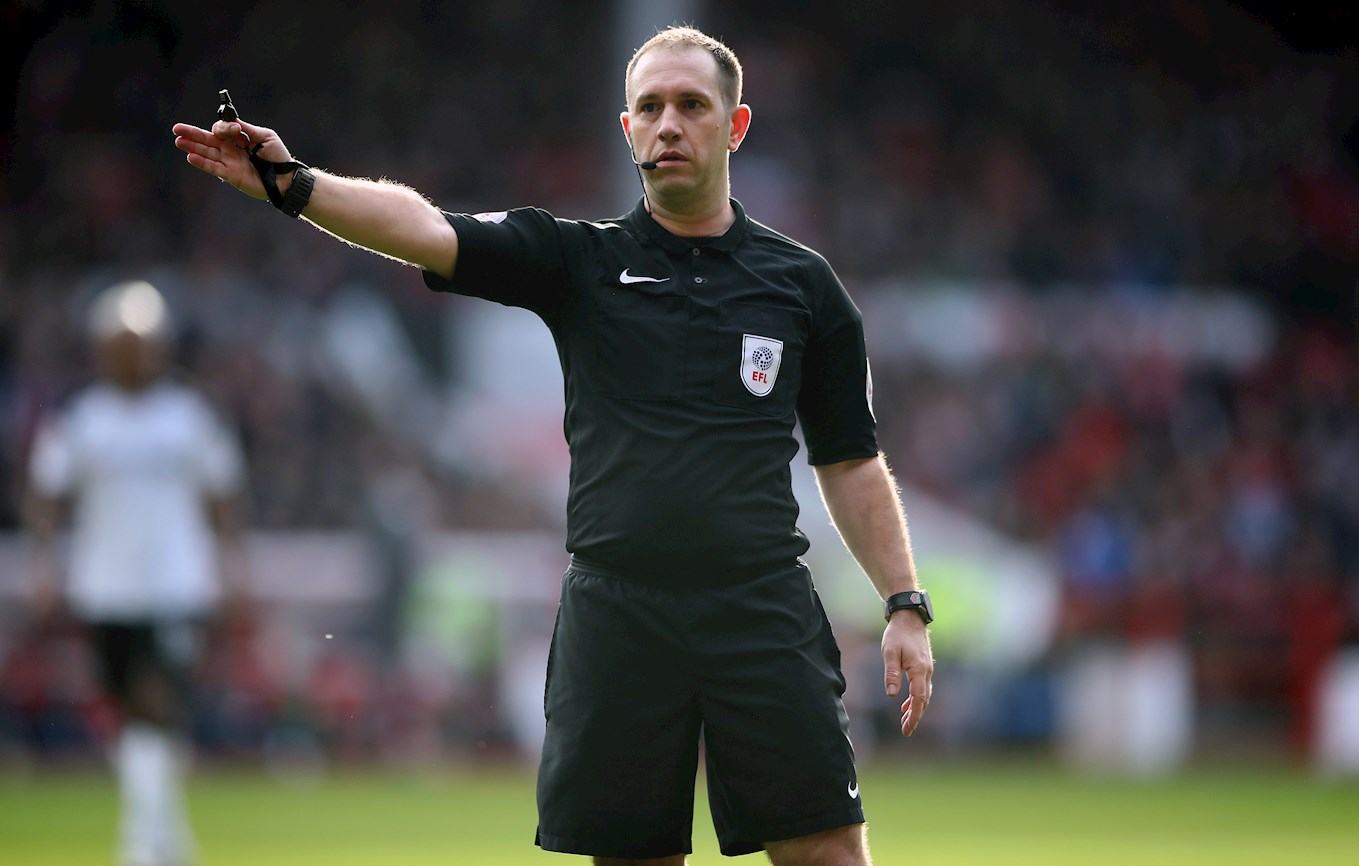 Jeremy Simpson will be the man in the middle for the match with Bristol City.

It will be the first time this season he will officiate a Sky Blues match this season, after overseeing three City matches in last season’s Sky Bet Championship.

So far this season, Webb has awarded 30 yellow cards in his eight Sky Bet Championship and one Sky Bet League Two matches.

Webb will be assisted by Lee Venamore and Natalie Aspinall whilst Geoff Eltringham will act as the fourth official.