John Sillett, who has sadly passed away at the age of 85, is a truly legendary figure in Coventry City’s history.

He will be most revered as the 1987 FA Cup winning Chief Coach, but he was also part of a promotion winning side in the 60s and subsequent to the FA Cup triumph he guided City to mid-table safety in the top-flight, reaching as high as 7th in one campaign, while later in life he would be a hugely popular Life President.

Sillett was born in Southampton on 20th July 1936. Sillett grew up at the ‘Lamb Inn’, where father Charles was the publican. John’s father had been a full-back with Southampton from 1931 to 1938, and that footballing pedigree had passed on to his sons.

John’s elder brother by three years Peter had also played for the Saints, appearing in 59 league matches. John also signed for Southampton as an amateur before signing for Chelsea in 1954 although he had not made a first team breakthrough at his first club. 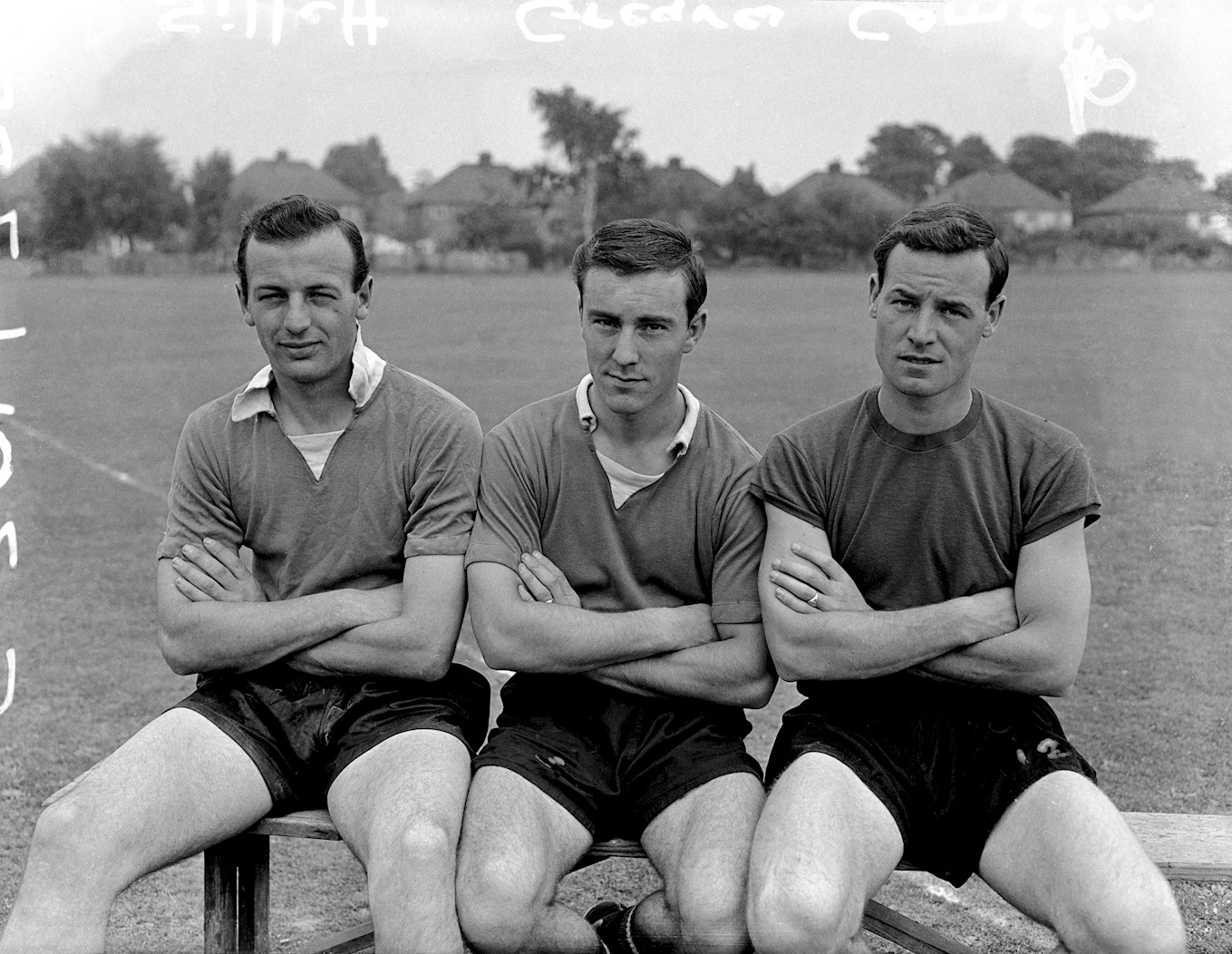 By then Peter was plying his trade for Chelsea. Making his debut at the age of 20 on New Year’s Day 1957, full-back Sillett went on to play 102 times for The Blues, scoring once, and gaining a representative honour, playing for The Football League. It was at Chelsea he first met Jimmy Greaves, and the two would become great friends. His last appearance for Chelsea was on 7th October 1961.

In April 1962, Sillett became Jimmy Hill’s first signing as Coventry City manager when he made the move to Highfield Road. He played in the final two games of the 1961/62 campaign, his debut at Highfield Road on 28th April 1962 in the Division 3 game against Hull City.

In his first full season, Sillett became a reliable regular for City. His first goal for the Club came in the final game of that 1962/63 campaign, an unstoppable free-kick in a 3-1 away win over QPR.

The Sky Blues would be promoted as Division Three Champions in 1963/64, with Sillett playing 41 league games of the successful campaign, which culminated in the 1-0 win over Colchester in front of 36,901 at Highfield Road. 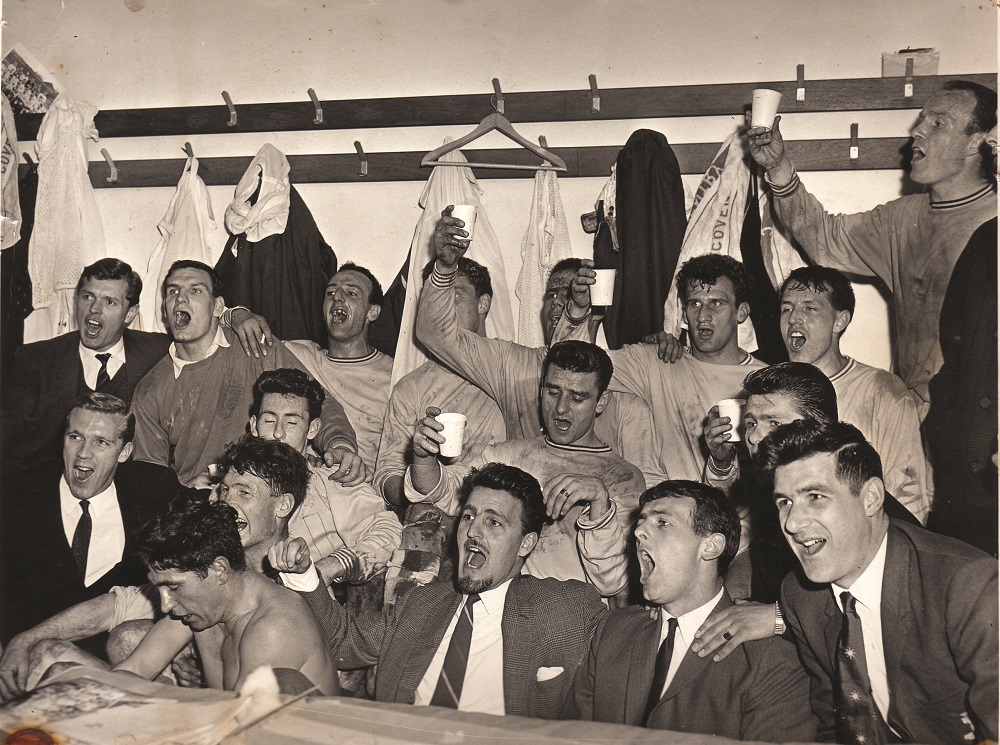 A slipped disc led to Sillett becoming a fringe player for the Sky Blues in the Second Division, John appearing 21 times in all competitions on the 1964/65 season. 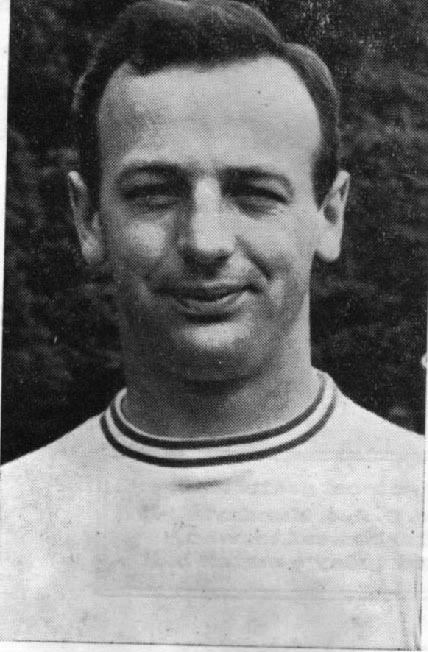 In July 1966, Sillett’s playing time at Highfield Road drew to a conclusion when he joined fellow Second Division side Plymouth Argyle. However he had to wait until November for his debut with his new club, missing both games against City. He remain at Home Park until 1968 when he retired from playing, his 240th and final career league game coming on 13th April 1968.

After hanging up his playing boots, Sillett made the move into coaching.

He was appointed Bristol City youth coach in 1968 under manager Alan Dicks, a former Chelsea team-mate and assistant manager during Sillett’s time at Highfield Road. From 1970 to 1974, Sillett was first team coach and played a significant part in the development of the team that got promoted to the top-flight in 1976. 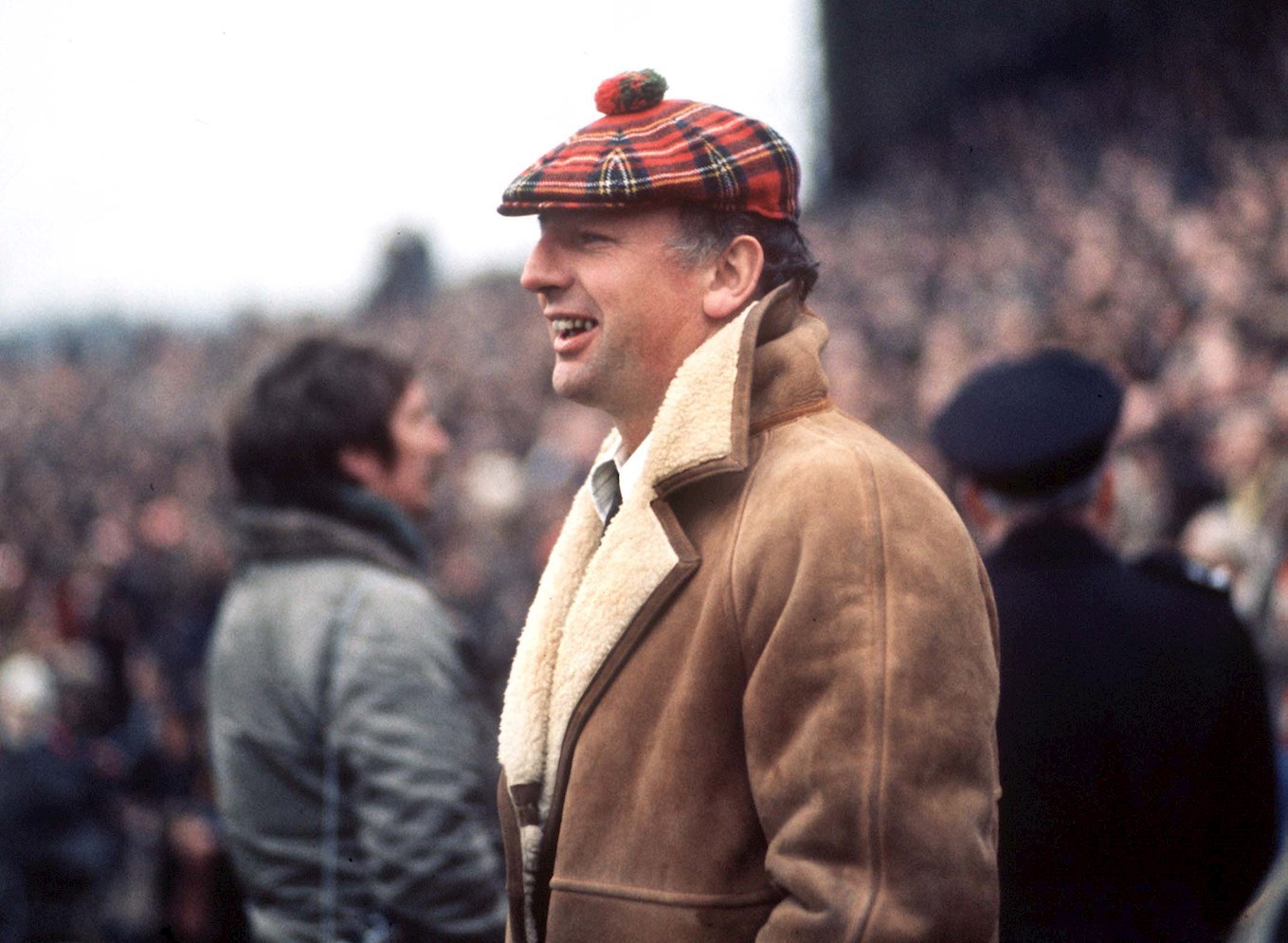 In June 1974, he was appointed manager of Hereford United. Under Sillett’s leadership, they stormed to the Third Division title in 1976 and John was named Third Division Manager of the Year. They would spend one season in the second tier, Sillett leaving half way through the following campaign. 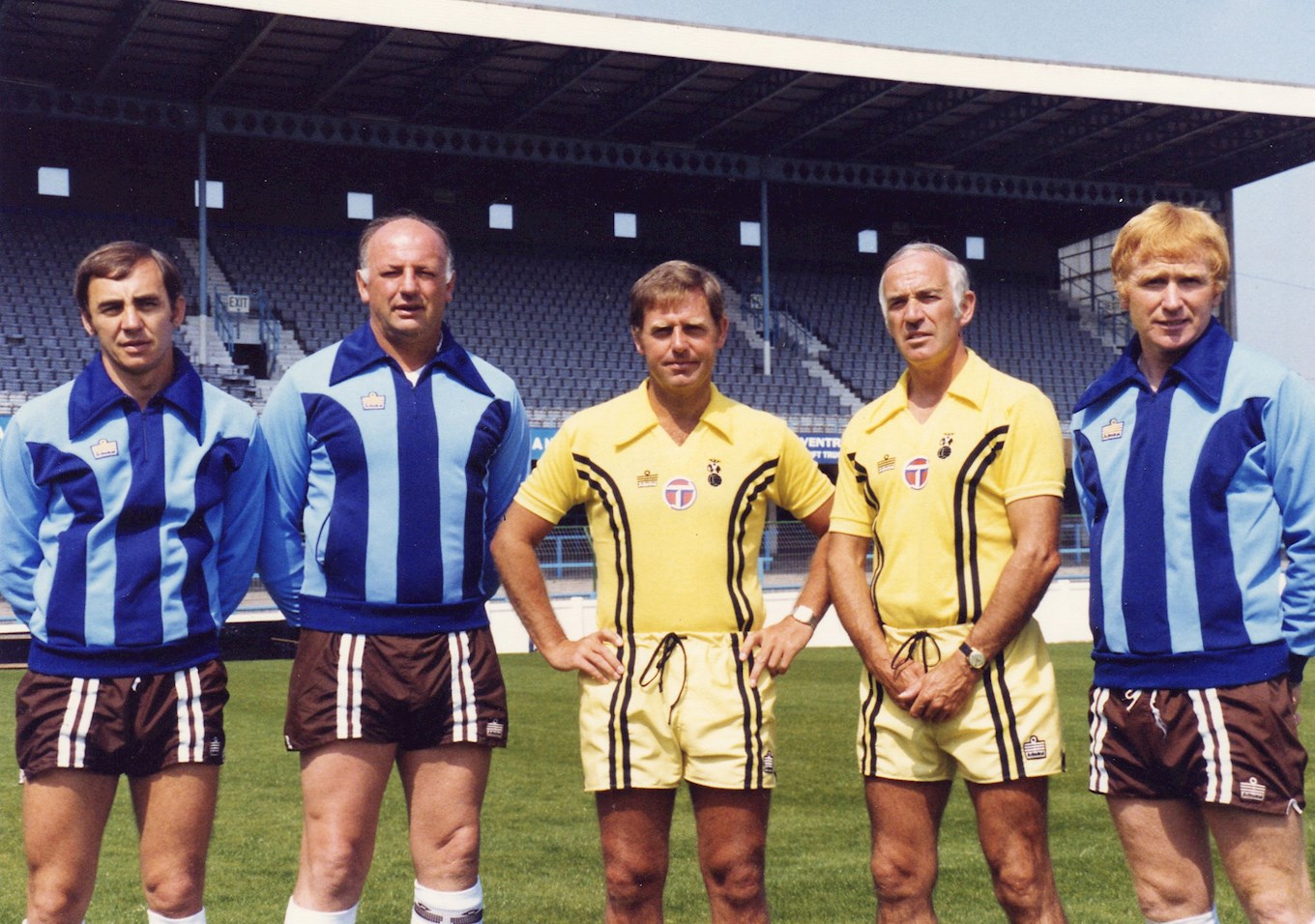 It was then that Sillett returned to Highfield Road. Gordon Milne recruited Sillett as Chief Scout and he then became a youth coach at the Club, but left in 1984.

However Sillett would return again as youth team coach under Don Mackay. When Mackay was relieved of his duties with three games left of the 1985/86 season and with City in a battle against the drop from the First Division, it was Sillett the board turned to, alongside Managing Director and Snoz’s great friend George Curtis. 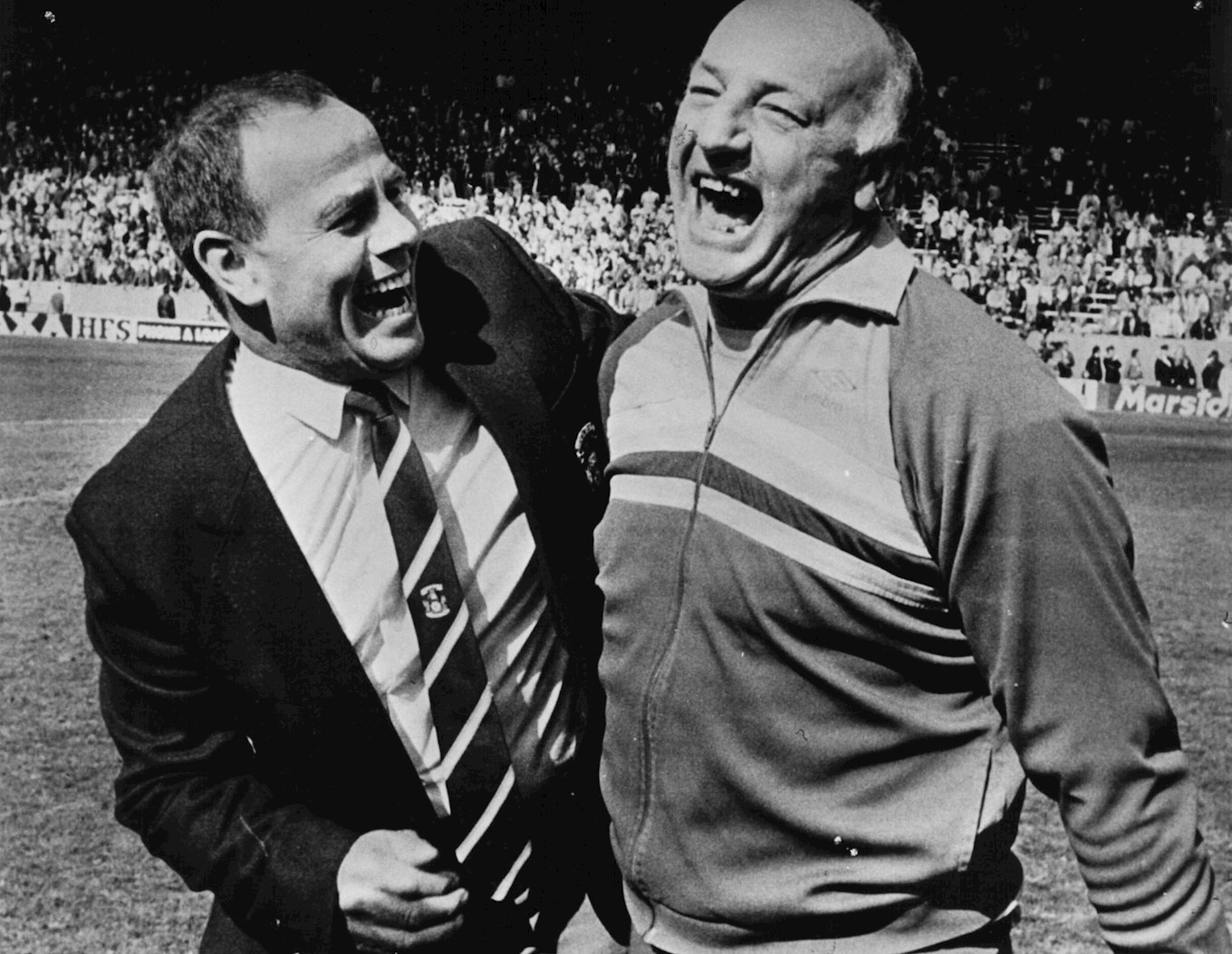 Home wins over Luton and over QPR on the final day proved enough to keep the Sky Blues up. That 2-1 victory of QPR was a hugely tense affair at Highfield Road – City went 1-0 down, but urged on by Sillett and Curtis, goals from Brian Kilcline and Dave Bennett secured survival.

The first-team reins were handed to Sillett and Curtis on a permanent basis ahead of the 1986/87 campaign, with John given the title of Chief Coach.

Despite an opening day loss at West Ham, City didn’t lose again until October as they improved massively. A narrow escape from relegation was replaced by a very healthy 10th place finish. However it was in the FA Cup where memories would be made, as City won the trophy for the first and only time in the Club’s history.

Bolton, Manchester United, Stoke and Sheffield Wednesday were all dispatched before City faced Leeds United at Hillsborough in the Semi-Final. Euphoric scenes followed as 27,000 City fans saw the Sky Blues win 3-2 to book a place in the Final at Wembley. 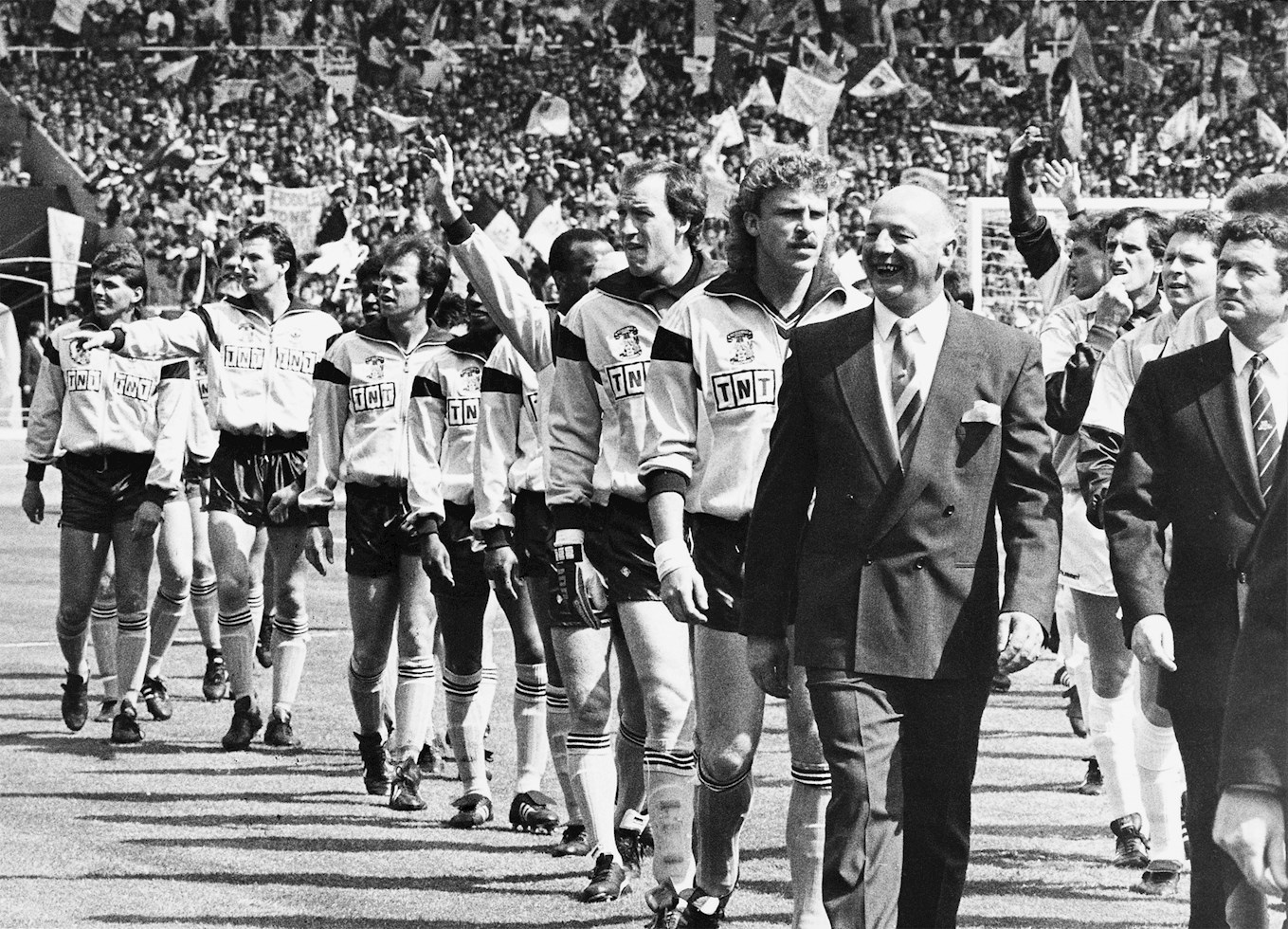 John Sillett had the honour of leading Coventry City out at Wembley for the FA Cup Final against Tottenham Hotspur on 16th May 1987. In a classic final, Clive Allen put Spurs ahead only for Dave Bennett to equalise. Gary Mabbutt put David Pleat’s side ahead just before the break, before Keith Houchen’s diving header levelled proceedings again. In extra time, Lloyd McGrath’s cross was turned into his own net by Mabbutt to make it 3-2 to the Sky Blues. Jubilant scenes followed at Wembley, as Coventry City and John Sillett paraded the trophy on the Club’s greatest day. 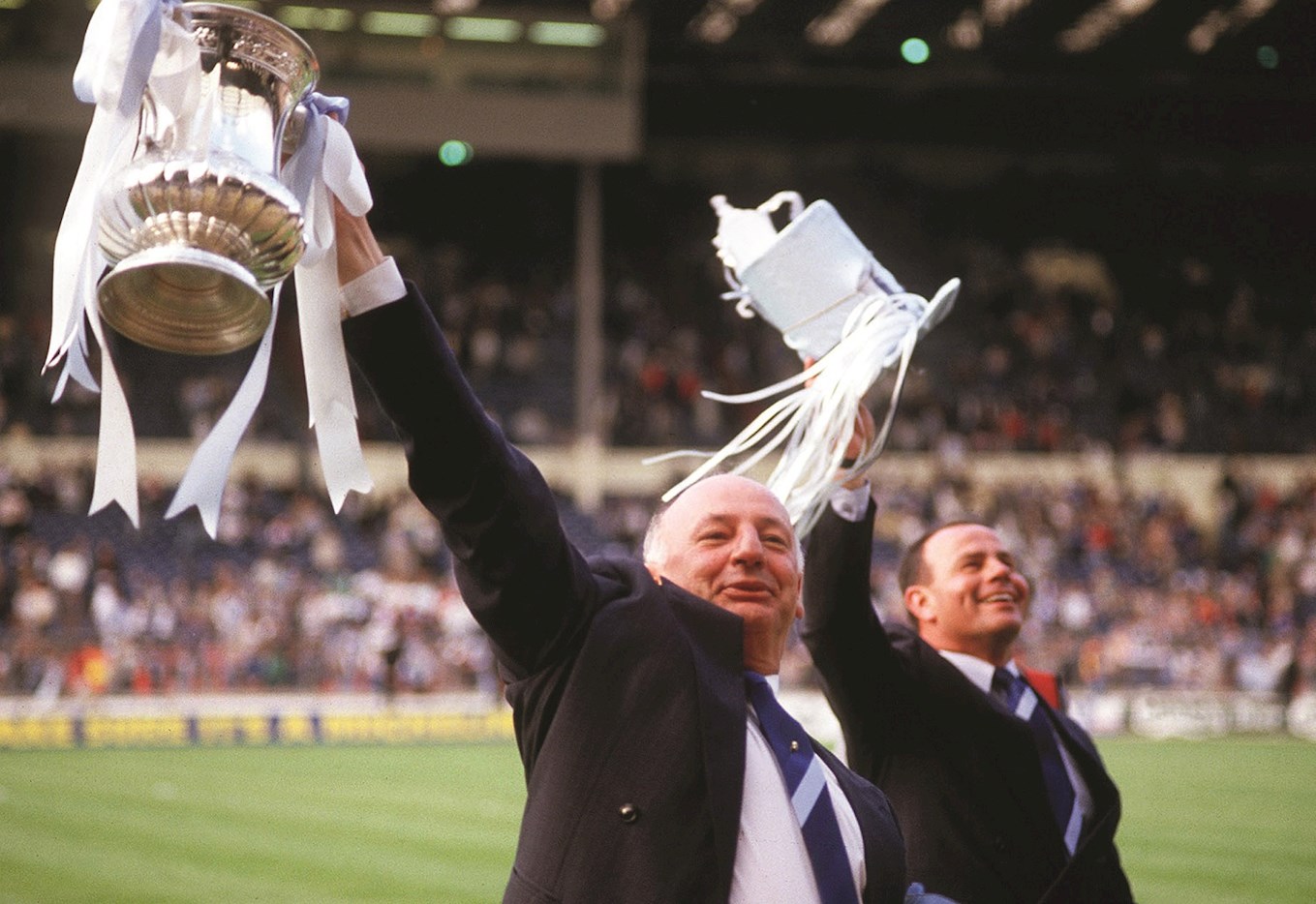 The next day City brought the trophy home with an open top bus parade through the streets of Coventry.

Ahead of the 1987/88 season, Sillett’s was given the role of Manager, with Curtis returning to Managing Director. Unveiling new signing David Speedie, Sillett uttered the memorable words; “For too long this Club has shopped at Woolworth’s, from now on we’ll be shopping at Harrods.’ 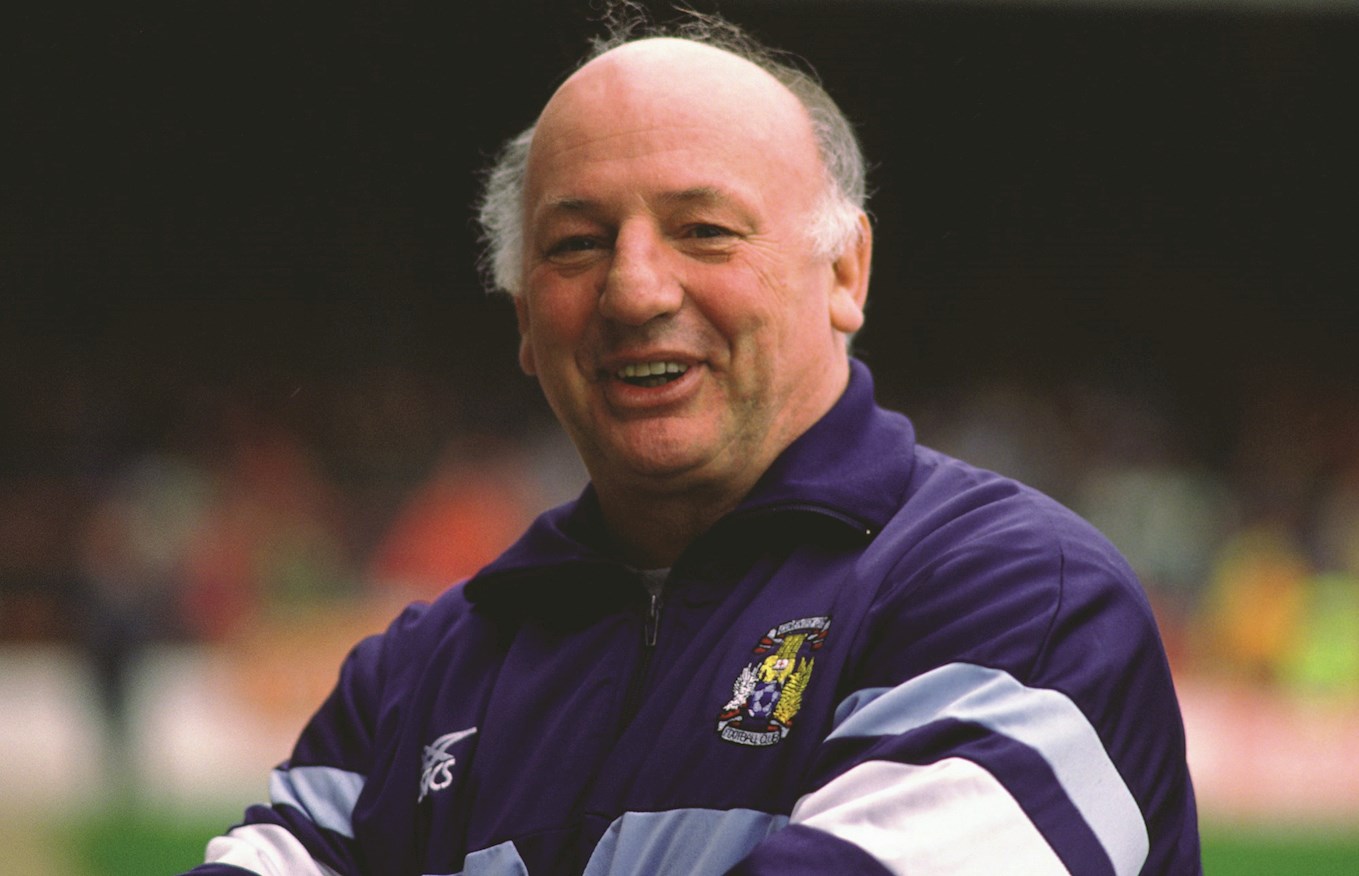 While the Charity Shield was lost against Everton, Sillett guided the Sky Blues to 10th in the First Division again, underlining his impressive achievements at the Club. Fans were flocking to see the side too, with the highest average attendance for eight years too.

He went even better in the 1988/89 campaign as City finished an excellent 7th place, the highest finish for 11 years. Highlights included a first win over Aston Villa since 1937 and victory over champions-elect Arsenal. 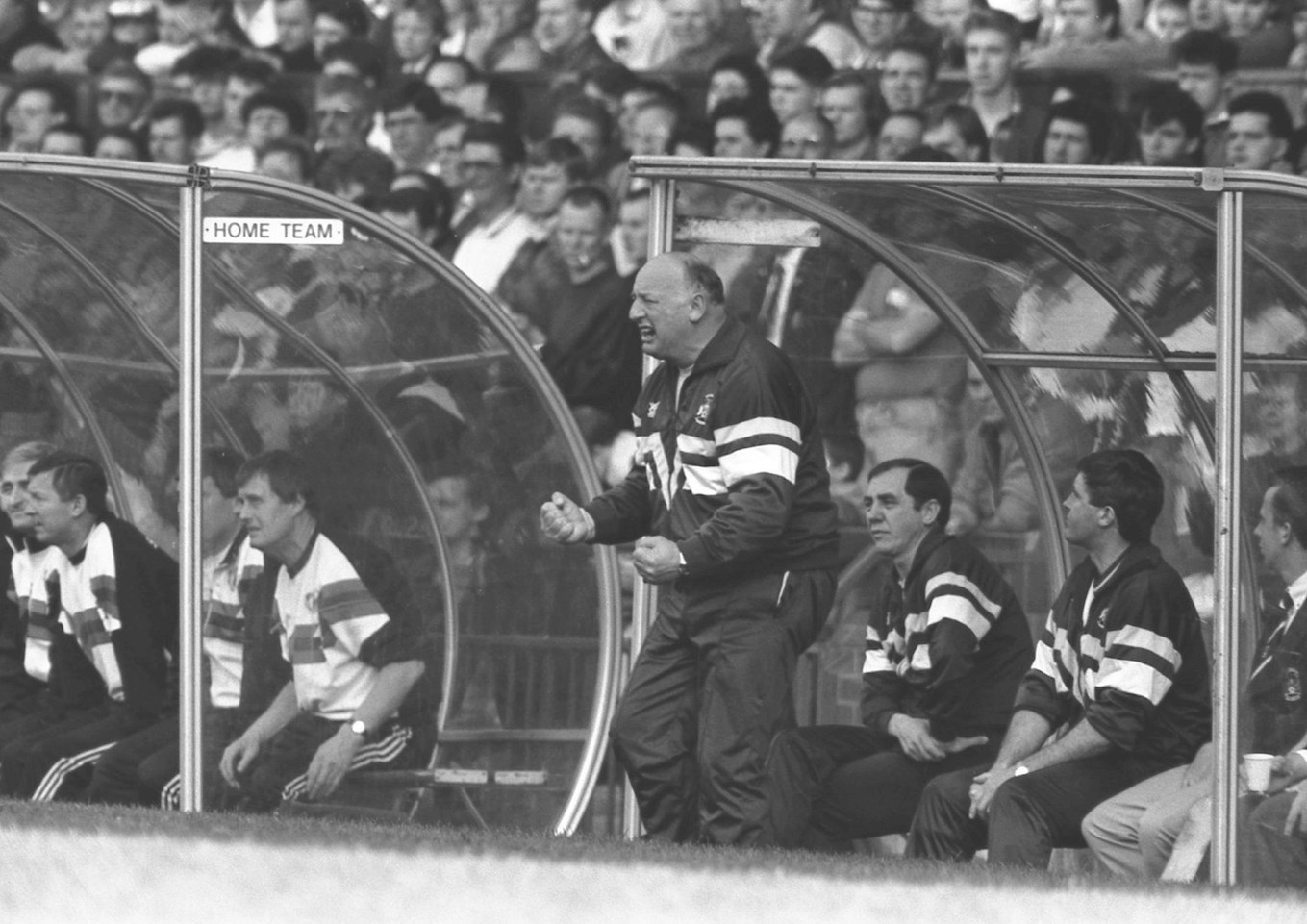 In 1989/90 City ended the campaign in 12th position, but reached the Semi-Final of the League Cup, where they lost 2-1 on aggregate to Nottingham Forest. Other notable achievements included being top after 4 games, a first ever win at Anfield and a first victory at Nottingham Forest since 1970.

Sadly, in football all good things come to an end. A bad start to the 1990-91 season saw Snoz relieved of his duties in mid-November, to be replaced by Terry Butcher.

Six months later Sillett was back in a hot-seat, again at Hereford. A good start saw his side fourth going into November, but he left at the end of his first full season. 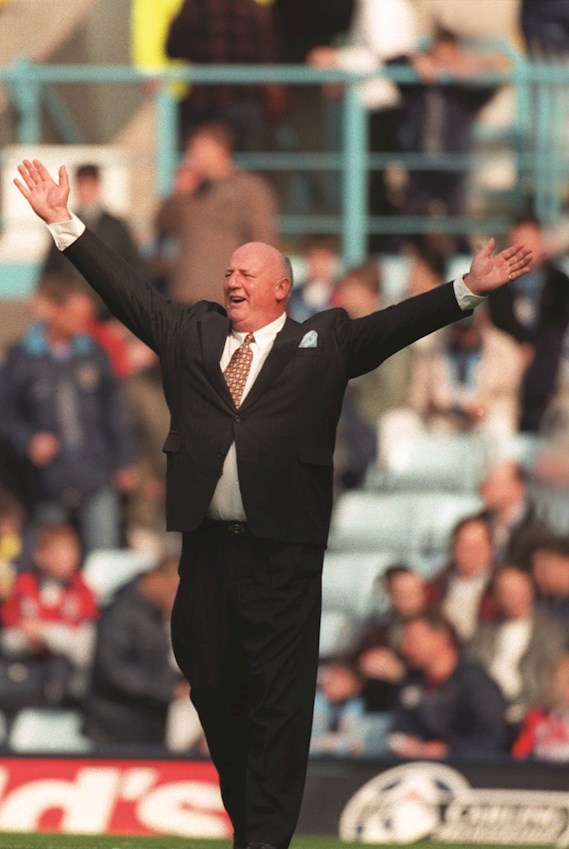 He would become a popular pundit on Central TV’s football coverage, and would return to Highfield Road again as a matchday host around the lounges and also on the mic on the pitch too, where he would remain hugely popular with Sky Blues supporters. Alongside Jimmy Hill on the final game at Highfield Road, from the Main Stand John would lead a post-match rendition of the Sky Blue Song as supporters gathered on the famous pitch. 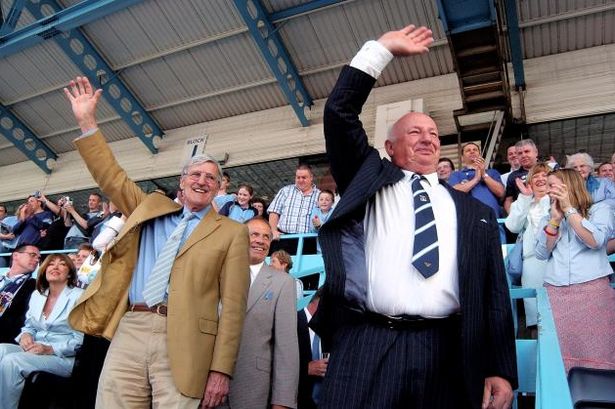 Sillett would form part of the selection committee when appointing Micky Adams as City manager in 2005, while he was also asked by England manager Sven Goran Eriksson to scout for the national side, more great recognition of footballing knowledge possessed by Sillett. 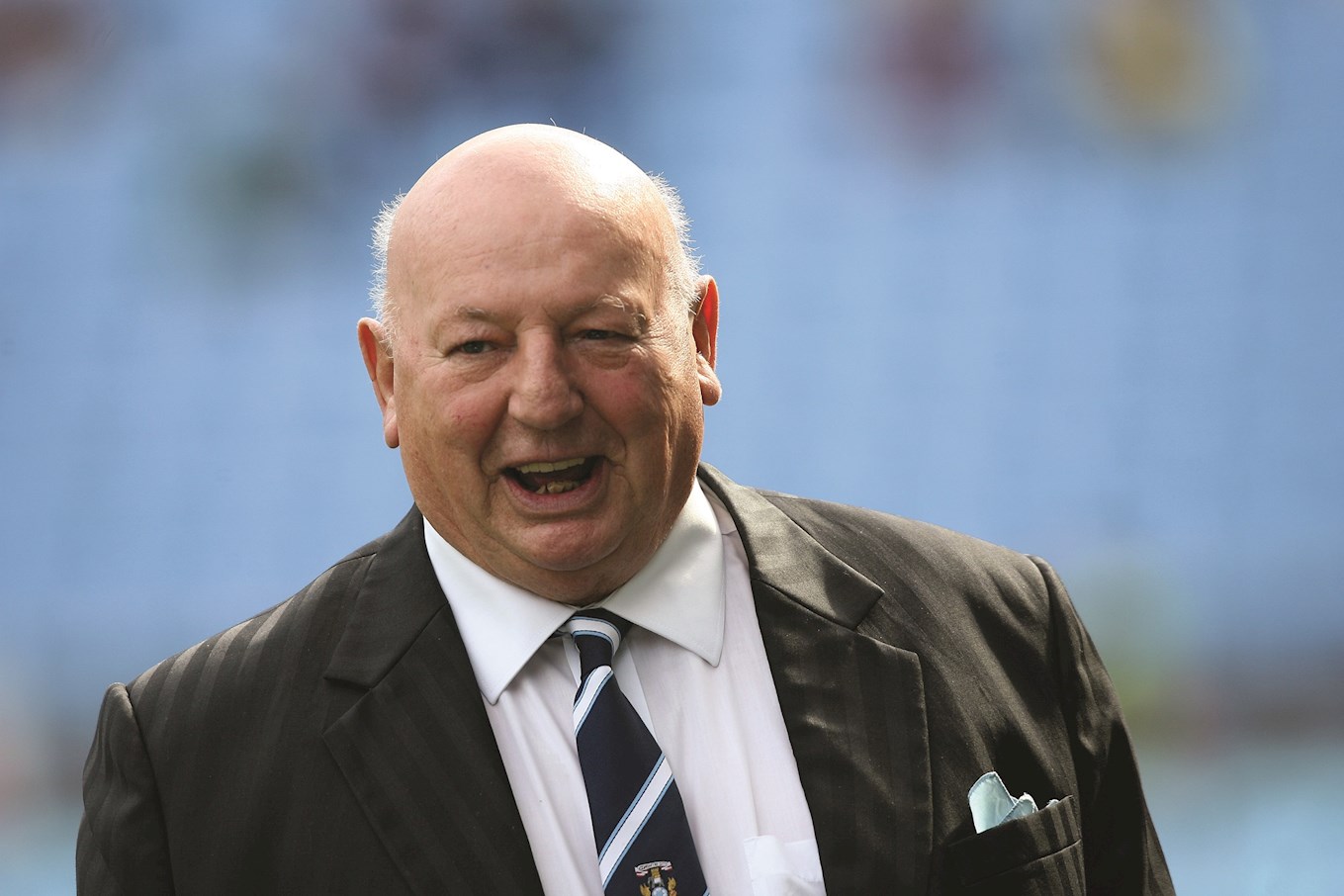 Living locally in Warwickshire still, John remained a regular presence at Sky Blues games once the Club moved to the Ricoh Arena in 2005. In August 2011 Sillett was made a Life President of Coventry City.

Sillett spoke on the pitch at Wembley prior to the 2017 Checkatrade Trophy Final, helping to rouse Sky Blues fans ahead of Mark Robins’ side’s victory, then bringing the trophy onto the pitch at the Club's next home game. He would return to Wembley a year later, watching from the Royal Box again as City won the League Two Play-Off Final. 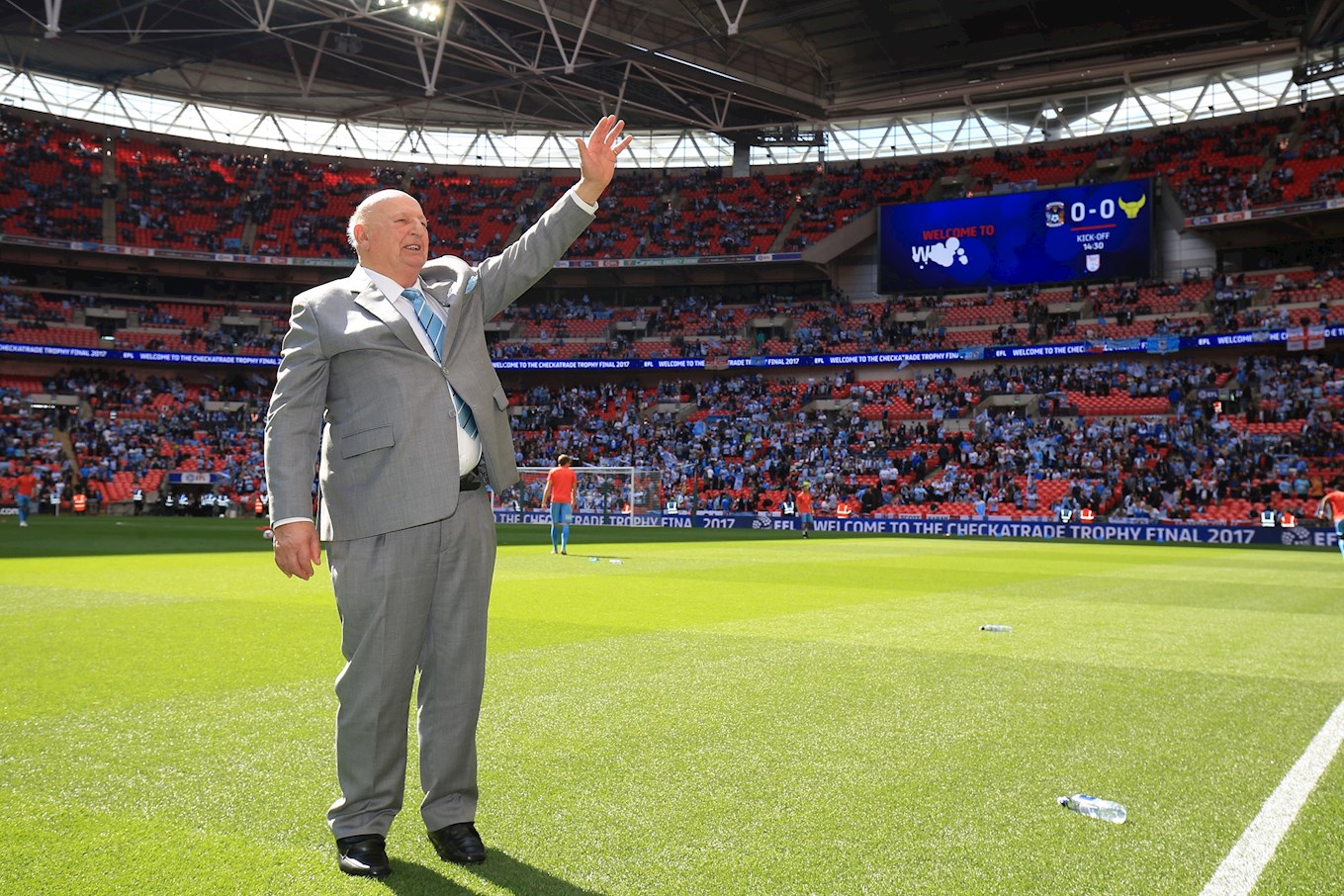 Sillett continued to be close with the Sky Blues’ management team on and off the field in his final years, and was invited to be part of the online Promotion Party in 2020 when City won the League One title, glowing with pride as he was interviewed alongside current City boss Mark Robins by former player Harry Roberts.

When the Sky Blues returned to the City in August 2021, Sillett was in attendance again when the Sky Blues played Nottingham Forest as tributes were paid to his friend and colleague George Curts, following his sad death a month earlier. It was to be Sillett’s final visit to watch his beloved team play. 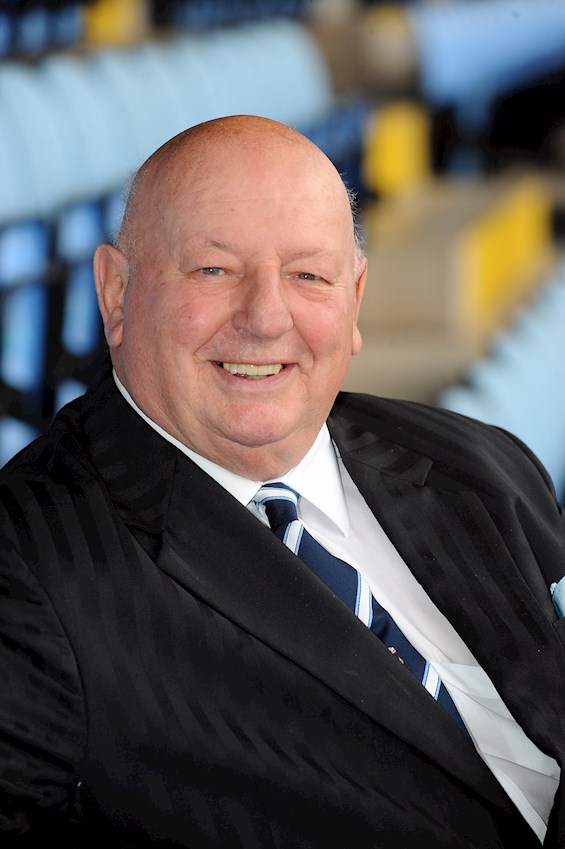 Sillett’s death was announced on 30th November 2021, at the age of 85. One of the biggest and most popular characters in the Club’s history, and hugely respected in football, his achievements are one of the only things to match his personality. He will be greatly missed by everyone who knew him, and all Coventry City supporters.