123 times Coventry City have faced Norwich City, with the next encounter this Wednesday night at St Andrew’s.

Coventry City have won the fixture 54 times, drawing 35 and losing 33 since the first clash in 1908. That game was a Southern League First Division game, where Norwich were 2-0 victors.

Ahead of Wednesday night’s game, we look back at three memorable encounters… 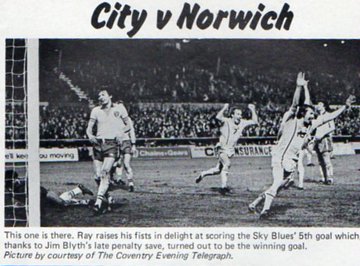 The Sky Blues came out on top in this thrilling festive fixture at Highfield Road, adding to Gordon Milne’s side’s growing reputation for attacking football, months after the famous last day escape from relegation against Bristol City.

Coventry City had gone 5 games without a win, and with Jim Holton and Mick Coop injured they had to play Terry Yorath and John Beck in defence, while Ray Gooding made his first start of the season. Barry Powell scored the opener from the spot (City’s 500th First Division goal), then Ian Wallace’s acrobatic bicycle kick doubled the lead. Norwich fought back with three goals before half-time to take the lead into the break.

In the second-half, Gooding lashed the ball in for his first Sky Blues goal on 56 minutes, then Bobby McDonald’s curling shot found the net to make it 4-3 to the home side. The Sky Blues had two goals disallowed before Martin Peters levelled for Norwich. With 9 minutes left, Ray Graydon headed home to make it 5-4.

There was more drama to come however, when Norwich were awarded a penalty with just 90 seconds to play. John Ryan stepped up, but Sky Blues keeper Jim Blyth made the match winning save in a sensational match. 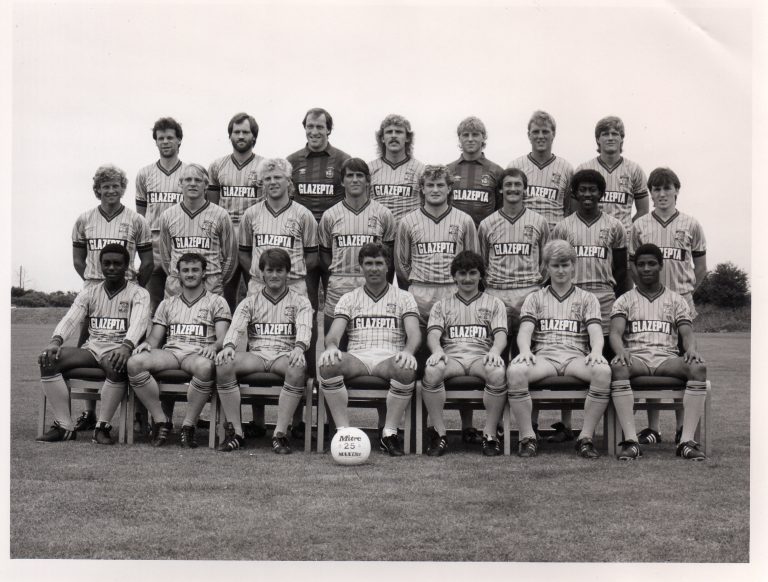 This final day win for the Sky Blues over Norwich kept them in the top division in 1983/84.

It had been a tumultuous period for the Club. Bobby Gould had been appointed Manager at the start of the 1983/84 campaign, following an exodus of the 1980/81 squad that nearly reached the League Cup Final. Gould’s extensive knowledge of lower league football and ability to spot a player with potential saw some bargain additions, such as Dave Bennett, Terry Gibson, Trevor Peake, Micky Gynn, Micky Adams and Stuart Pearce.

City got off to a good start, but only two wins from the 19 games preceding the final day clash made this a must win encounter. Mick Ferguson, a City star of the 70s, had re-joined on loan from Birmingham City who despite the close proximity of the two sides in the table had no issue in Ferguson making a temporary return.

At kick-off City were level on points with Birmingham City and Stoke City, with the Blues having the superior goal difference. Mid-table Norwich took the lead in the 35th minute with a penalty, but City equalised just two minutes later with striker Ferguson scoring the goal.

With 20 minutes to go the Sky Blues went ahead, Dave Bennett scoring directly from a corner. In the dying minutes, Norwich striker Robert Rosario was presented with an easy chance to score and consign Bobby Gould’s side to the drop. Silence fell upon Highfield Road as Rosario’s header hit the inside of the post and into the arms of Perry Suckling in the Sky Blues goal.

Meanwhile at St Andrew’s, Birmingham City were denied victory over Southampton by the width of a post. Ferguson’s goal had helped keep the Sky Blues up at the expense of his parent club, sparking jubilant scenes at Highfield Road - including an iconic photo of Gould with chairman Iain Jamieson.

The Sky Blues were comfortable winners over high-flying Norwich City back in 2006. The Canaries included ex City stars Darren Huckerby and Youssef Safri but it was to be a miserable return to their former club for the pair.

Micky Adam’s side took the lead at the Ricoh Arena after 12 minutes when summer signing Chris Birchall scored his first goal for the club, hitting the ball home from 25 yards out.

Striker Kevin Kyle was making his home debut for the Sky Blues and he opened his account with a header after 63 minutes.