From the 21st April – 14th July 2021 an original torch from the 1948 Olympic Games will be taken between 54 participating schools completing the relay, connecting communities and showing an Olympic spirit of friendship!

From the 21st April – 14th July 2021 an original torch from the 1948 Olympic Games will be taken between 54 participating schools completing the relay, connecting communities and showing an Olympic spirit of friendship!

Former Coventry City defender and Head of Sky Blues in the Community – Dave Busst was invited as a guest runner to take part in the relay to guide the children from St Thomas More Primary School through the streets of Coventry to Grange Farm Primary School.

They began their relay on the morning of Tuesday 27th April, smiles beaming on the children's faces, waves flagging as they passed local residents cheering them on, whilst cars beeped and encouraging them on their way. 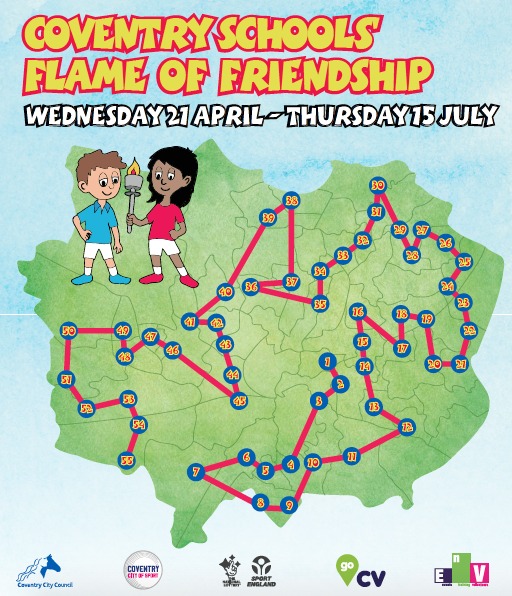 The #FlameofFriendship began its journey from Southfields Primary School on the 21st April, linking numerous Coventry schools every day for the next 3 months and giving over 20,000 young people the opportunity to experience such a fantastic event and share some light in what has been such a difficult year for us all.

Key themes of the relay include:

This event highlights Coventry’s continuing link with Tokyo 2020 whose volunteers have been trained by EnV.  The event will also link schools and their communities as well as highlight Olympic values such as friendship.