Since this series started, we have seen that so many managers of Coventry City have fascinating back-stories and Harry Buckle is right up there with them. Manager of Coventry from the summer of 1909 until the end of the 1910-11 season, as a player he scored Coventry’s first two hat-tricks in the Southern League and worked on the building of The Titanic!

Moving from the Birmingham and District League to the Southern League in the summer of 1908, Coventry signed left winger Harry and centre forward Ike Turner (But not Tina) from Bristol Rovers. The pair both debuted in City’s first ever Southern League game, each of them getting on the score-sheet for the first time in the third match, a 3-4 defeat to New Brompton (Who became Gillingham).

Buckle – who had played in a Representative XI for the Southern League the previous season - would miss only one of the 43 league and cup games, top scoring from the wing with 16 goals, some of them his trademark ‘pile-drivers.’ Although at 5’10’ he was tall for a winger - especially in those pre-World War One days - Harry was notorious for not wanting to head the ball, always preferring to bring it down. Thankfully he was decent with his feet and notched what is considered City’s first hat-trick in senior football in a 5-3 win over Portsmouth on 13 April 1909.

The star name in the side as a full international with top flight experience, and still in his prime at 27, Buckle was asked to become Coventry’s player-manager for the 1909-10 season after local tobacco magnate David Cooke joined the board and injected cash for players. In later years, Coventry have sometimes suffered from seeing player-managers not wanting to play but Buckle applied himself admirably. Having finished 20th of 21 teams in the first Southern League campaign, Harry lifted the club to eighth place second time around, again finishing as top scorer. His 17 goals from 38 league games were added to by one more in the FA Cup. 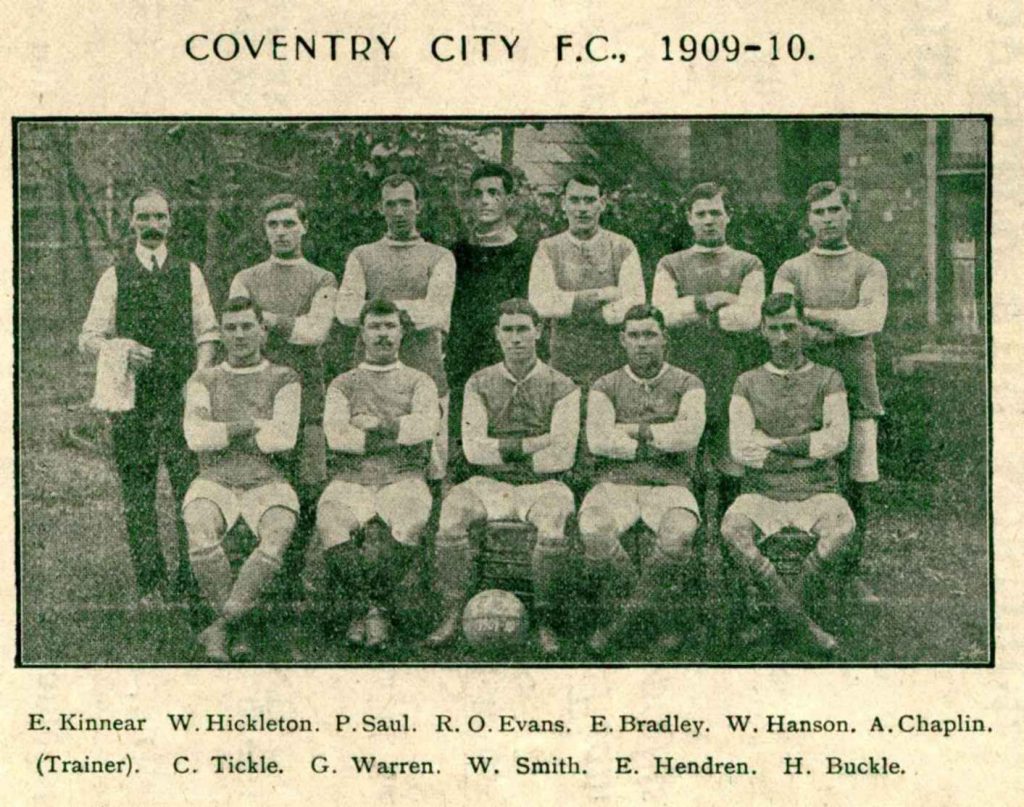 Buckle’s Southern League City sensationally included wins over two first division sides in a glorious cup run, winning away to Preston North End and knocking out Nottingham Forest at home. City reached the quarter final against Everton (Who had beaten his old club Sunderland in the previous round). A record gate of over 19,000 produced bumper receipts which allowed the club to finance a new grandstand.

Buckle’s managerial practicality saw him realise the defence needed improving. The signing of Wales international goalkeeper Bob Evans and centre half Eli Bradley were master-stokes as the number of goals conceded was cut by a third – from 91 to 60 – with Evans becoming the first player to win an international cap while with the club.

Playing outside left himself, Buckle wanted someone to combine with and brought in Patsy Hendren from Manchester City where he had managed just two appearances in the City side relegated from the top flight the previous season. Hendren was an instant success with two goals on his debut in an away win at Watford. He ended the campaign in double figures in the goal charts, as did new centre-forward Herbert Powell who had caught the eye playing for New Brompton. Hendren is best remembered not as Coventry’s inside left but as one of England’s best ever batsmen. Making his Test debut over a decade after Buckle brought him in, Hendren played 51 Tests between 1920 and ’35, scored an incredible 170 First Class centuries and a achieved a career aggregate of over 57,000 runs!

Hendren played only three times in Buckle’s third season during which Harry played in all but two of the 42 league and cup games, scoring 10 goals including the club’s second Southern League hat-trick in a 5-1 win over Southend the week before Christmas in 1910 son followed by the winner in a big cup tie away to top flight ‘Wednesday’. 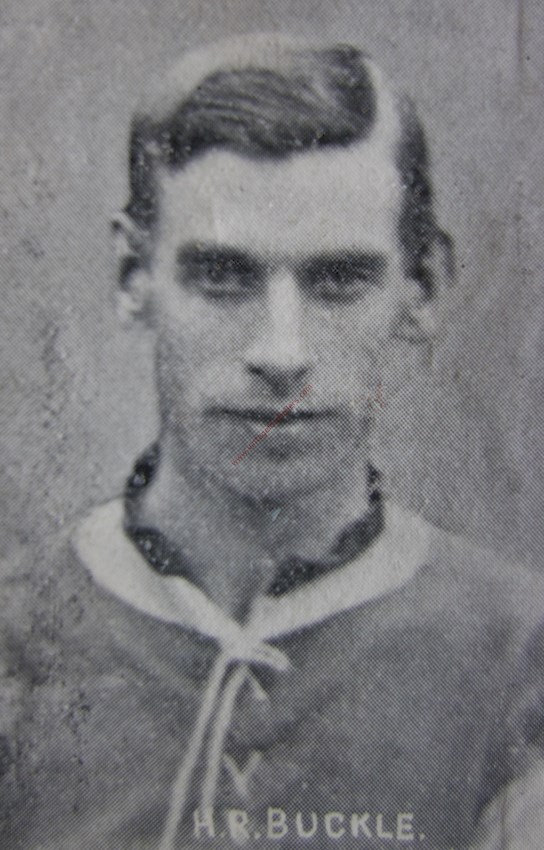 As Coventry finished 10th he signed off with his 44th goal in his 126th match, as Norwich City were beaten 3-1 at Highfield Road on the last day of the season in 1911. Undoubtedly as a player and as a manager Harry Buckle had done very well at Coventry but this was simply a single chapter in his story.

Born in Belfast on 6th March 1882 Harry had started with Cliftonville Casuals and Cliftonville Olympic before really making his name after debuting for Cliftonville in 1901. In August 1902 Harry won his first cap for Ireland, playing against Scotland in a game to raise funds for the victims of the Ibrox Disaster, which had killed 25 people.

Two months later he moved to England, signing for reigning champions Sunderland who he debuted for at Stoke the following month.

Playing as an amateur, it was Buckle’s only game for Sunderland that season but he established himself after coming into the side again a week short of a year after his debut, this time at West Brom. By December he was a hero. Having scored in three successive games, Buckle got a couple and had a hand in the other in a 3-1 win away to rivals Newcastle on Boxing Day. It was a day when the referee missed his train and a reserve official took charge – but Buckle had most definitely arrived and ended the season with 10 goals from 21 games. 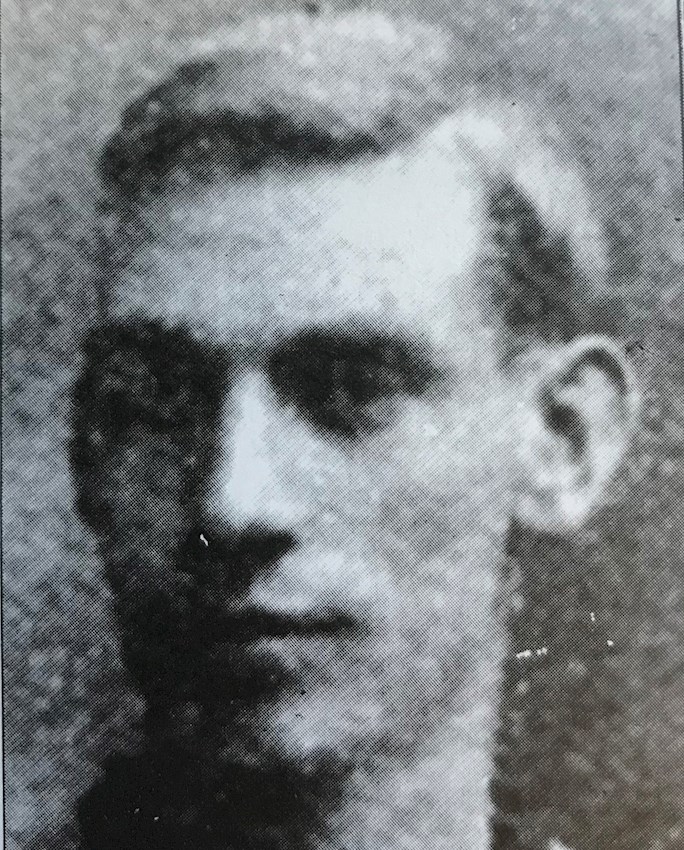 Harry started the first five and last five games the following season but only played four times in between, as he contested the left-wing berth with future England international Arthur Bridgett. An appearance for Ireland against England in March 1904 led to Harry’s recall at Roker Park. Buckle always had a goal in him and duly netted his fourth of the season in the penultimate fixture as a 3-1 win away to Newcastle threatened to derail the Magpies first ever title win.

Buckle played in another derby victory over Newcastle on the opening day of the following 1905-06 season but after the arrival of Belfast born boss Bob Kyle, Harry’s game was up come New Year’s Day, after 15 goals in 46 games for The Wearsiders. Harry left Sunderland to join Portsmouth in May 1906.

In his solitary season on the South Coast, Buckle helped Pompey to runners’ up spot in the Southern League before switching to Bristol Rovers who were also a Southern League side. One of four new forwards signed by ‘The Gas’, Buckle and his future Coventry team mate Turner both scored on their debuts as Rovers slaughtered New Brompton 9-1 on the opening day of the season. An opening day crowd of 4000 almost tripled to 11,000 for a 3-0 win over Brentford three days later but Buckle’s Bristol couldn’t keep it up and eventually finished sixth. Harry did well enough personally though to earn a third and final international appearance, becoming the second Rovers player to be capped when selected for a 1-0 win over Wales at Aberdare in April 1908, shortly before coming to Coventry.

It was after his experience at Coventry that Harry left England behind to return home to Belfast. Joining Belfast Celtic in 1911 he had three years there, gaining representative honours as part of an Irish League XI in 1912 and 1913. Having returned to Belfast Harry also got a job in the Harland and Wolff shipyard, which was unusual for a Catholic at the time. Nonetheless he worked there for several years as his football career continued with Glenavon at the outbreak of the Great War and later Belfast United where he reprised his Coventry role as player/manager. 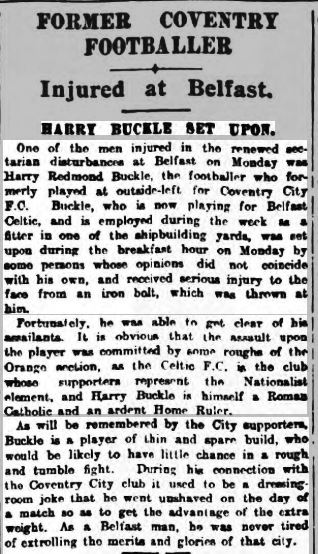 Life wasn’t easy as a Catholic. Reportedly at one point he suffered a face injury after a bolt was thrown at him while on another occasion he was tossed into the river. There was worse as his grandson Roy remembered, “He came back to Belfast and worked in the shipyards on the Titanic. My grandfather was a Roman Catholic and was friendly with a foreman who was a Protestant. The foreman came out to him one day and said, ‘Harry, go home. They’re going to do in a Catholic.’ Later that day they drowned two Catholics and Harry never went back.” He went to live in Cork and stayed there until he died. Harry passed away in 1965.

In Cork he had got a job with the Ford Motor Company in a managerial and secretarial capacity. He also played for their works team Fordsons who later became Cork FC. By now very definitely a veteran, but still a player with a touch of class, Buckle played in two FAI Cup finals for Fordsons, both played on St. Patrick’s Day. In 1924 he appeared against Athlone Town and two years later lifted the cup days after his 44th birthday after helping to beat Shamrock Rovers when he was again player/manager.

He still kept playing for one more season, scoring once in 1926-27 to add to the seven league goals he’d scored for Fordson’s in the previous couple of seasons. It was a playing career that spanned over a quarter of a century and included several spells as player/manager, beginning at Highfield Road. Harry Buckle may only have been City’s supremo for a season but his story on both sides of the Irish Sea once more shows that concealed within the list of names of people who managed the club in the distant past there are some fascinating tales.