Matchday Programme PUSB is available to buy for this Friday's televised game between Coventry City and Reading.

You can buy a copy of PUSB now by clicking here.

Our main feature interview is with former Royals man Dom Hyam, as the Sky Blues defender talks about his season so far and the journey he has been on with City from League Two to the Championship in three years.

Club Historian Jim Brown shares memories from the European campaign in 1970, as we approach the 50th anniversary of our last game in Europe and a second-leg victory over Bayern Munich at Highfield Road.

Meanwhile Rob Mason speaks to former Sky Blues defender Jeff Blockley, who played 4 games in that European campaign among his over 150 for the Club.

We also profile Friday's opponents Reading, and have a range of news and views from around the Sky Blues - with regular columns from Mark Robins, Liam Kelly and Dave Boddy, plus the latest from the Under 23s and Under 18s side, plus Sky Blues in the Community.

There's much more elsewhere inside our 64 page programme too, including Testimonial Tales looking at the career of City great George Mason.

With the Reading fixture being our closest home game to Remembrance Weekend and the anniversary of the Coventry Blitz, we will also be paying tribute inside PUSB, as well as there being a minute silence before the game.

Buy your copy of the progamme now here. 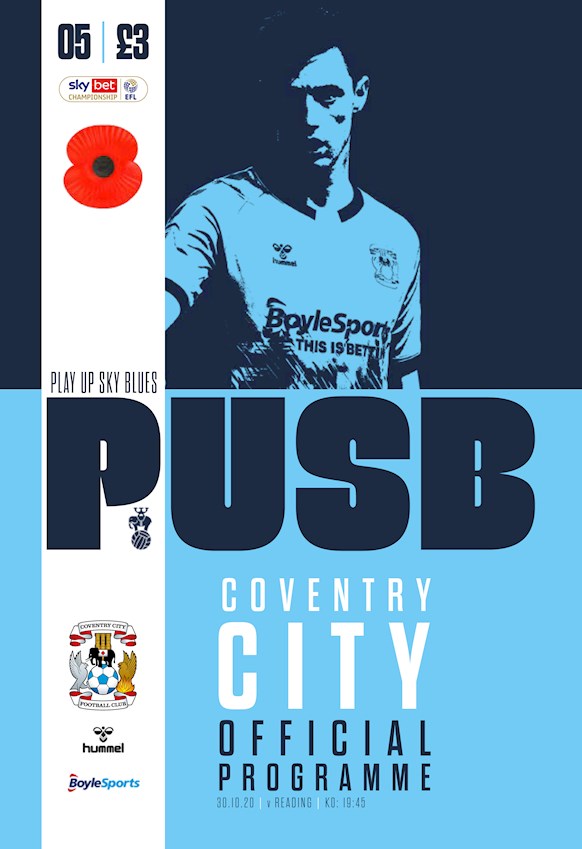 A limited number of copies of the programme from games vs Swansea City and Blackburn Rovers are now available to purchase in-store at the Club Shop at Arena Shopping Park.