City took on Bournemouth, the side Wilson departed the Sky Blues for back in 2014 and ahead of the clash, the striker spoke about his aspirations to have returned to Coventry with the Cherries before he joined Newcastle United earlier this summer.

“For me I’ve been at Bournemouth for six years and I just waited for the day when Bournemouth played against Coventry so I could return to play against my home town club, although I’d never want to score loads of goals against them.

“I want both clubs to get promoted to the Premier League. I sat and watched the game and I was disappointed not to be involved as I’d have loved to have played. I guess that’s for the best really as I don’t want to upset Coventry fans and I don’t want to upset any Bournemouth fans either.” Now 28, Callum has is hoping his move to Newcastle will help him in his target for a return to the England squad, “For me the long term goal is to try and get into the European Championship squad which is why I wanted to take this opportunity that arose to come back into the Premier League.

“I’ve left a lot of friends behind in the Bournemouth squad but with the Euro’s coming up I definitely feel that I need to hit the ground running and ultimately that will hopefully lead to me getting back into the England squad.”

The most recent of Callum’s four caps came a year ago this month when he came off the bench in England’s 6-0 win away to Bulgaria – a game besmirched by the horrors of racism in football. The last three of Wilson’s full international appearances have come from the bench. There’s a strong case for believing he deserves more of a chance having scored on his debut and only start against the USA in November 2018. Scoring on his debut has become a trait of Callum’s. This season he scored on his Newcastle debut at West Ham while he bagged a brace on his bow for Bournemouth against Huddersfield in 2014.

There was no goal on his Coventry debut at Hartlepool back in August 2009 and it wasn’t until March 2013 that Callum got on the score-sheet for City, scoring in a dramatic 2-2 draw at home to Colchester. By this time he had scored one goal each on loans to Kettering and Tamworth but the Colchester goal was just a third in 26 senior appearances.

Many of those games had been played on the right wing with Marcus Wilson – Callum’s manager in both of his loans into non-league – explaining “an old burly centre-half on his way out needs his win bonus for his mortgage” as he kept the youthful forward out wide. The experience of that position told as Calum scored his first goal for Coventry. Picking up the ball almost on the touchline just inside the Colchester half Wilson tore into the U’s defence, turning them inside out before finishing with a shot across the keeper and just inside the far post. 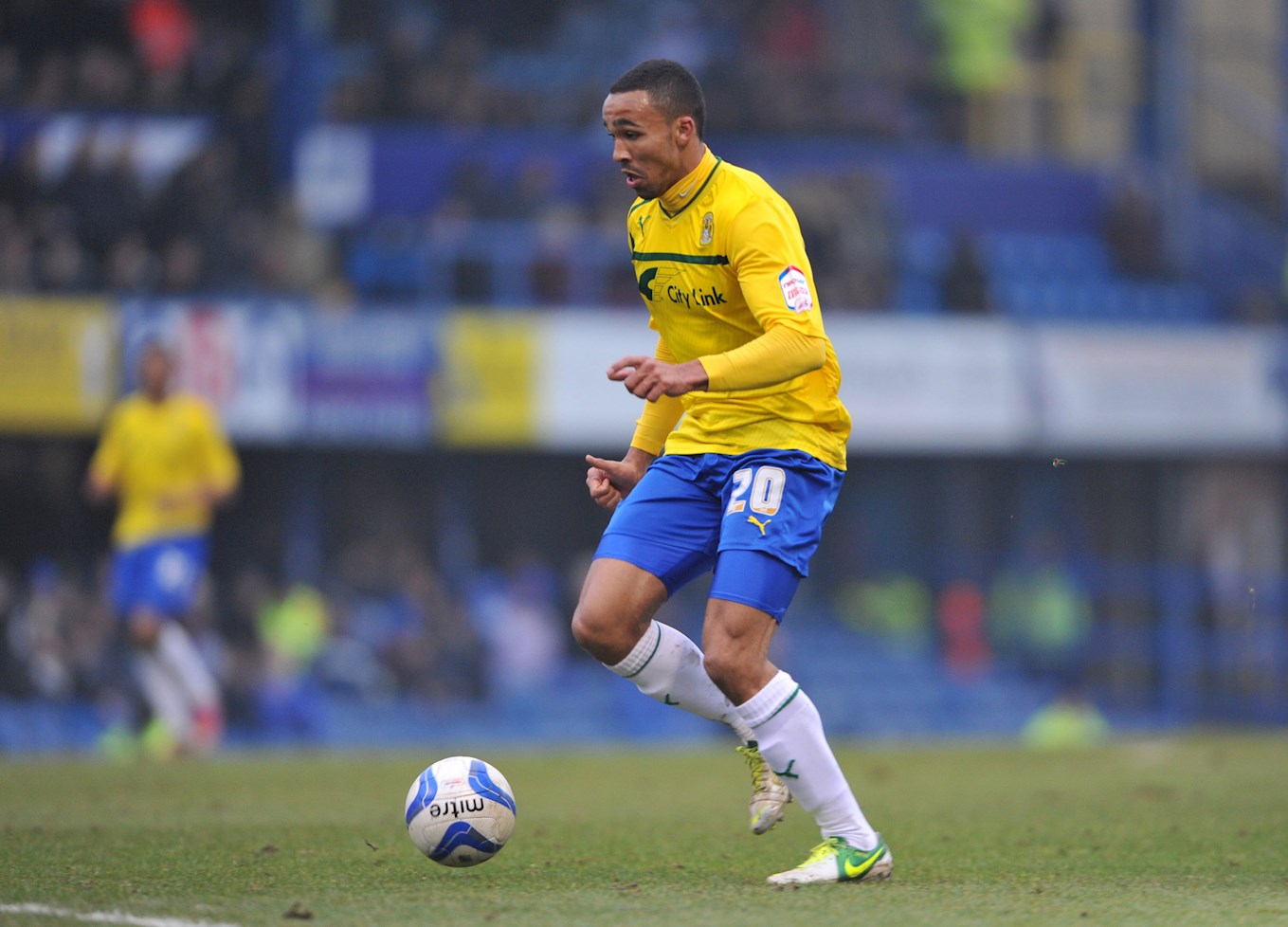 Moments like that provide satisfaction not just for the scorer but for everyone who has helped a young player along the way. Having started as a six-year-old playing on Radford Common, Callum had experienced early spells with the CCFC academy and gone on to score prolifically in Sunday League football before coming back to Coventry as a 14-year old.

“Gregor Rioch and Richard Stevens were the academy managers at the time” says Callum of his development years. “They were a massive help for me. Off the field there were two guys, one called Ray Gooding and one called Lol Harvey. They were the people who took me back and forth to training. I probably wouldn’t be in the position I am if it wasn’t for those guys getting me to training. Sometimes it is things like that that help someone make it. Those guys didn’t get anything for it. I guess they just saw potential in me and decided to pursue it.”

That goal versus Colchester was Callum’s only goal in a dozen games for City that season but in the following 2013-14 campaign everything he seemed to touch turned to gold. 22 goals saw him included in the League One team of the Season as well as being named Coventry’s Player of the Year and Players’ Player of the Year.

“I had worked really hard on my fitness” says Callum when asked if he has ever worked out how he suddenly became a massive success. He continues, “I’d been struggling with a few little niggles injury wise and I managed to get on top of those. During pre-season I knew I was going to be playing that season with me and Leon [Clarke] up front. I had six weeks then to get my head around the fact that it as an opportunity that I needed to grasp with both hands. I just continued to work hard throughout pre-season to try and get a bit of form to take into the season.  It certainly helped to score in the first game. That set the platform and the tone for the rest of the season.” 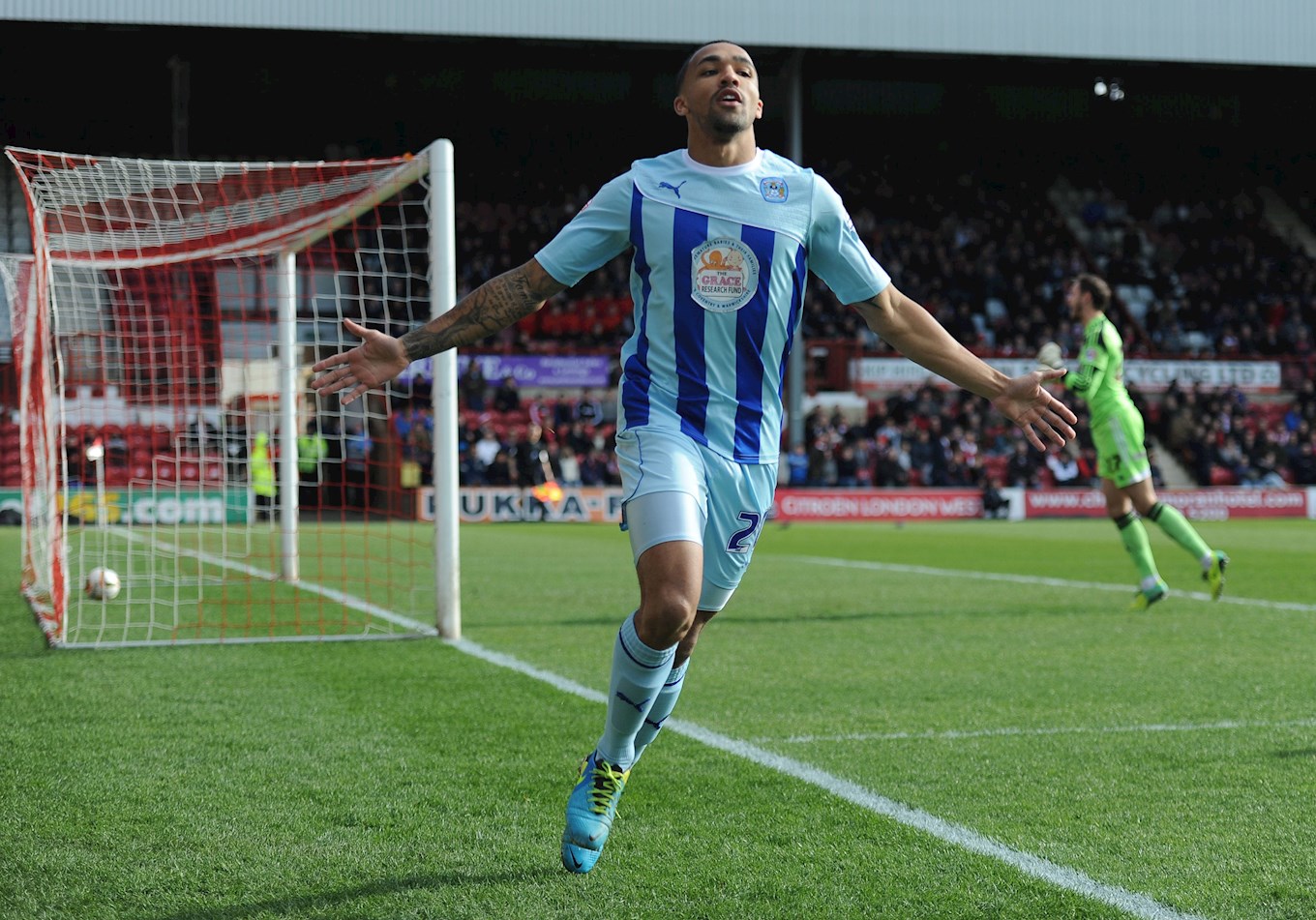 Although that opening day goal came in a defeat at Crawley, Callum was up and running. He scored twice in the next match in a 5-4 win over Bristol City at Sixfields and then scored twice again in both of the next two home games with an away goal in between. Having scored consistently throughout the campaign, it was no surprise Wilson was in demand.

“On the back of having an excellent season at Coventry I felt it was time for me to take the next step and test myself at a higher level. I was grateful to Bournemouth for giving me that opportunity. They didn’t have to do that and they paid a lot of money to make me the club’s record transfer. When you move up a league questions are asked about you but I just took the confidence I had from Coventry and the same mentality. It’s always nice if you get off to a flying start and again that set the tone for the season and helped me to achieve success with the team.”

Two goals on his Bournemouth debut against Huddersfield and five in his first seven games made Callum an instant hit on the south coast. Another purple patch of six goals in five games preceded a debut for England Under 21s in November 2014. In what would be Callum’s only cap at that level he came on as a sub for Harry Kane in a 3-2 loss to France.

Having top scored with 20 Championship goals, Wilson was at the same level as Kane the following season as he helped the Cherries to win the Championship followed by five successive seasons in the Premier League.

Not all was plain sailing for Callum who suffered serious anterior cruciate ligament injuries to both knees in September 2015 and February 2017. Showing he was fully recovered, Wilson enjoyed his best two Premier League campaigns in the years immediately after his second operation. Shortly after his return from injury a hat-trick against Huddersfield silenced any doubters after his second ACL. “It would be right up there as a personal high along with scoring mine and the club’s first Premier League goal. As a team I think the journey that we were on together would take in getting promoted to the Premier League in the first place, but also remaining in the Premier League for as long as we did was also something to be proud of. No one thought we would get there but to do so and then stay there for five seasons was what dreams are made of really.” 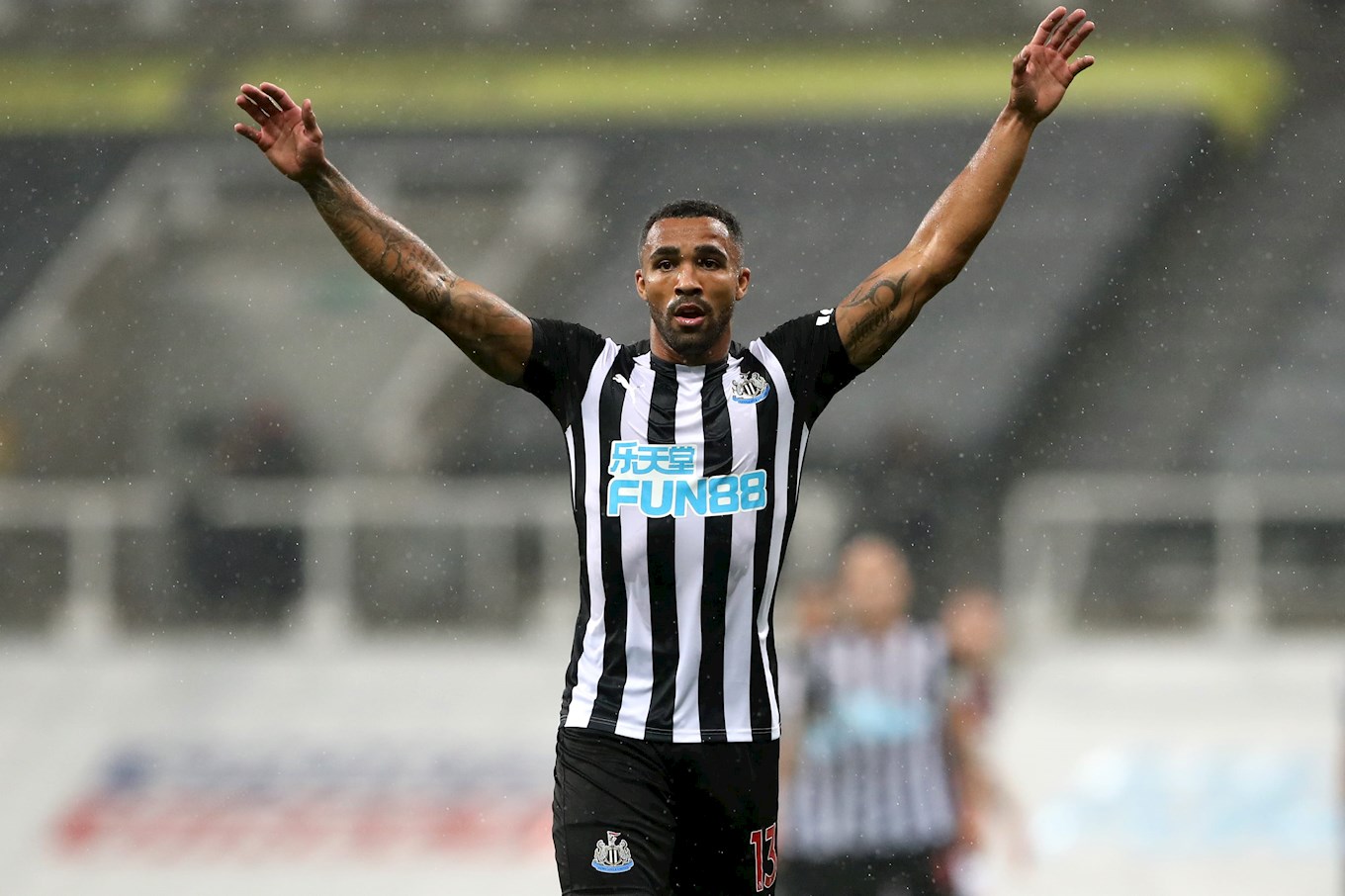 Now Callum has a new dream at Newcastle but instead of playing in front of 50,000 at St. James’ he is playing in front of fewer than 500 due to Covid.  “When you do join a new club, especially one as big as Newcastle you want to be able to express yourself and show the fans what you’re made of. Unfortunately at the moment they’re only watching from afar on TV but hopefully there’ll be many goals and when fans are eventually allowed back in I’ll be able to celebrate with fifty odd thousand and take the atmosphere in. I scored again on my debut and it’s hopefully set me off for a good season. I just want to be as consistent as I can in my performances.”

Fans of the Sky Blues understand exactly what is in store for supporters on Tyneside and will no doubt wish Wilson well as he aims for that place at Euro 2021.