Writer Rob Mason speaks to former Sky Blues striker Stephen Elliott about his career, his time with City and what he is up to now...

Eight years ago Republic of Ireland international striker Stephen Elliott marked his home debut for the Sky Blues by escaping the attentions of Harry Maguire to score in a 1-1 draw with Sheffield United. ‘Sleeves’ had just arrived from playing in Scotland where he had ended the previous season by helping Hearts hammer Edinburgh rivals Hibs 5-1 in the Scottish Cup final. Three times a promotion winner and a man who was given a Premier League debut for Manchester City by Kevin Keegan, played with and for Roy Keane, and under Giovanni Trapattoni on the international stage, Elliott possessed an impressive pedigree when he lined up for the Sky Blues. 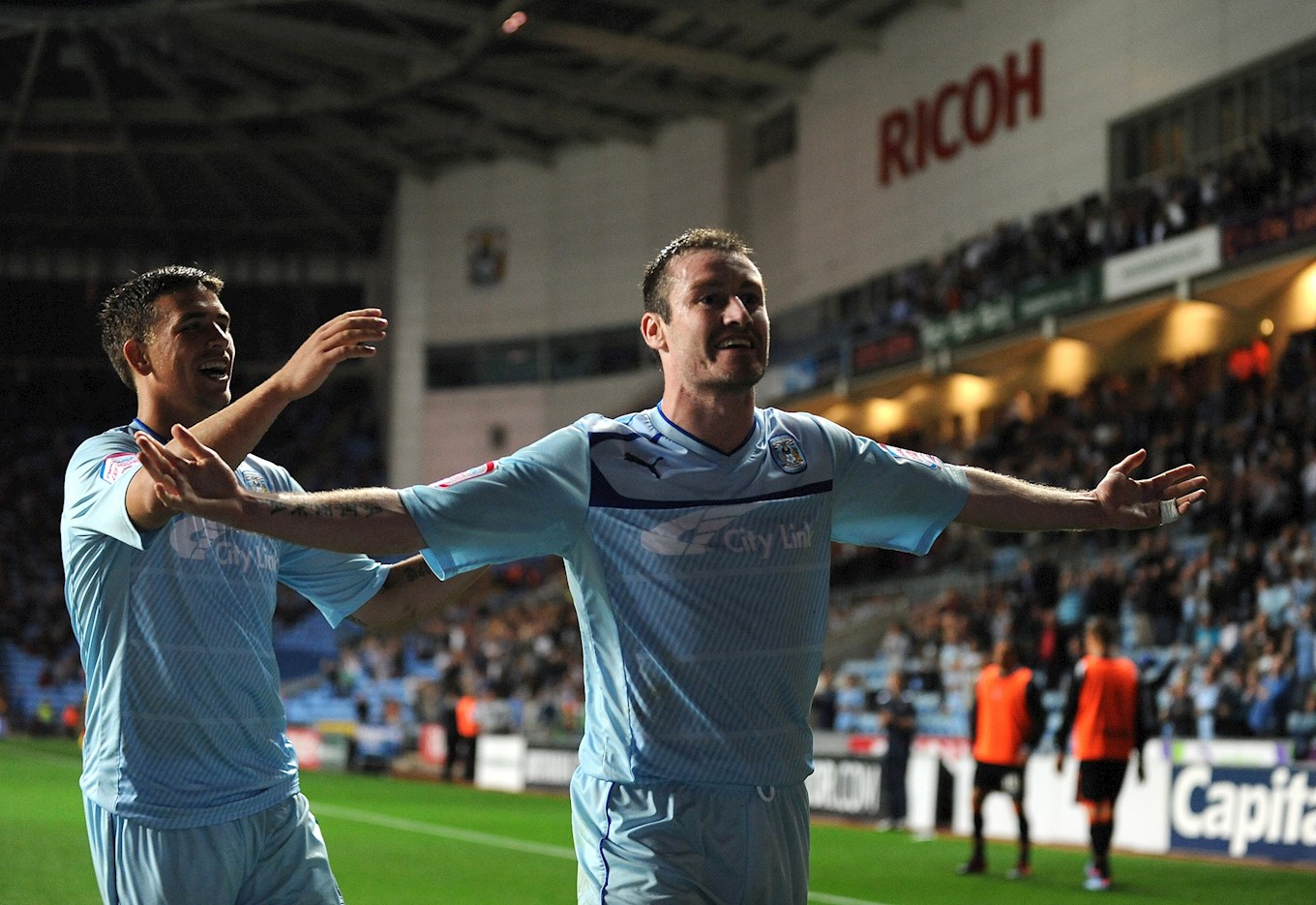 “I actually enjoyed my time at Coventry. It’s a really good club with some really good people working behind the scenes but from a personal point of view I have to look at Coventry as the start of the end of my career,” he reflects on his time here.

“I picked up a knee injury and never really got back right with that. I ended up at Carlisle and a few weeks into my Carlisle career I ruptured my Achilles and I don’t know if that came from the weakness on that side of my body with my knee being bad.

“I got the knee injury in training. There was nobody near me but some of the lads said they heard something snap. I had massive problems for the best part of 18 months. I had six or seven scans and was out of contract and spent a lot of money personally on physios trying to get myself put right. I ended up needing surgery on it. When I had the surgery with a top surgeon in London called Andy Williams, he found that the actual ligament had snapped totally off the bone. It had been a difficult thing to read. I did get back playing but it was never quite the same.” 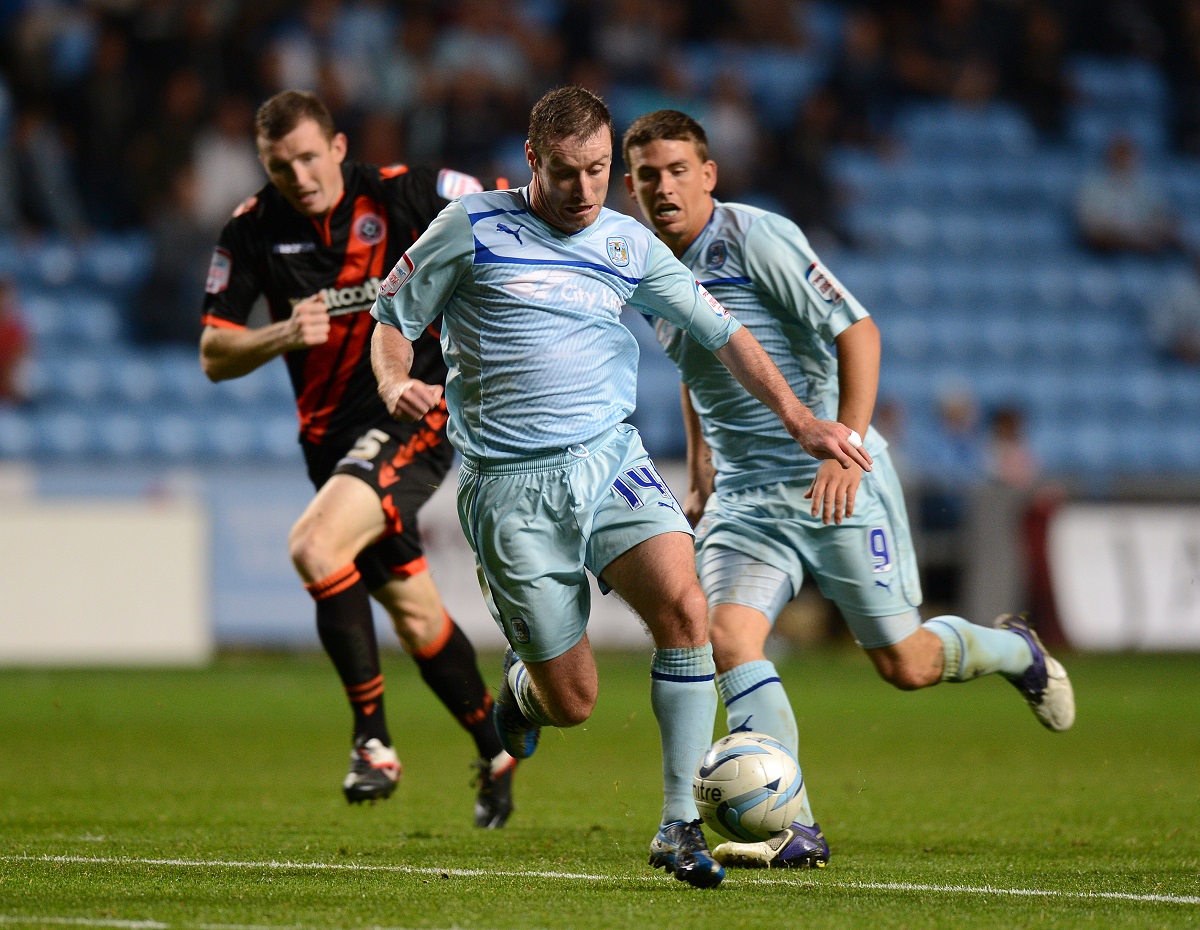 At the time, ‘Sleeves’ - he acquired that nickname from his habit of saying ‘Sleeves-up?’, an Irish expression meaning ‘Are you serious?’ – was still in his twenties. A Dubliner, he caught the eye of Manchester City when scoring five goals in a half-hour spell for Stella Maris, one of two local clubs he played for along with Belvedere.  Joe Royle brought him to Manchester in 2003, a year in which Stephen top-scored for Ireland in the FIFA World Youth Championships.

Although this was long before Manchester City became the moneybags men of English football, Elliott still had his childhood hero Robbie Fowler, as well as Nicolas Anelka, Paolo Wanchope and Jon Macken ahead of him in the pecking order while Joey Barton, David James and Claudio Reyna were amongst his star-studded team mates. After a couple of top-flight appearances off the bench, ‘Sleeves’ knew it was time for regular football. He turned down Celtic to sign for Mick McCarthy at Sunderland, knowing the manager a little from the international scene although at that time Elliott’s Irish experience was limited to the junior teams. 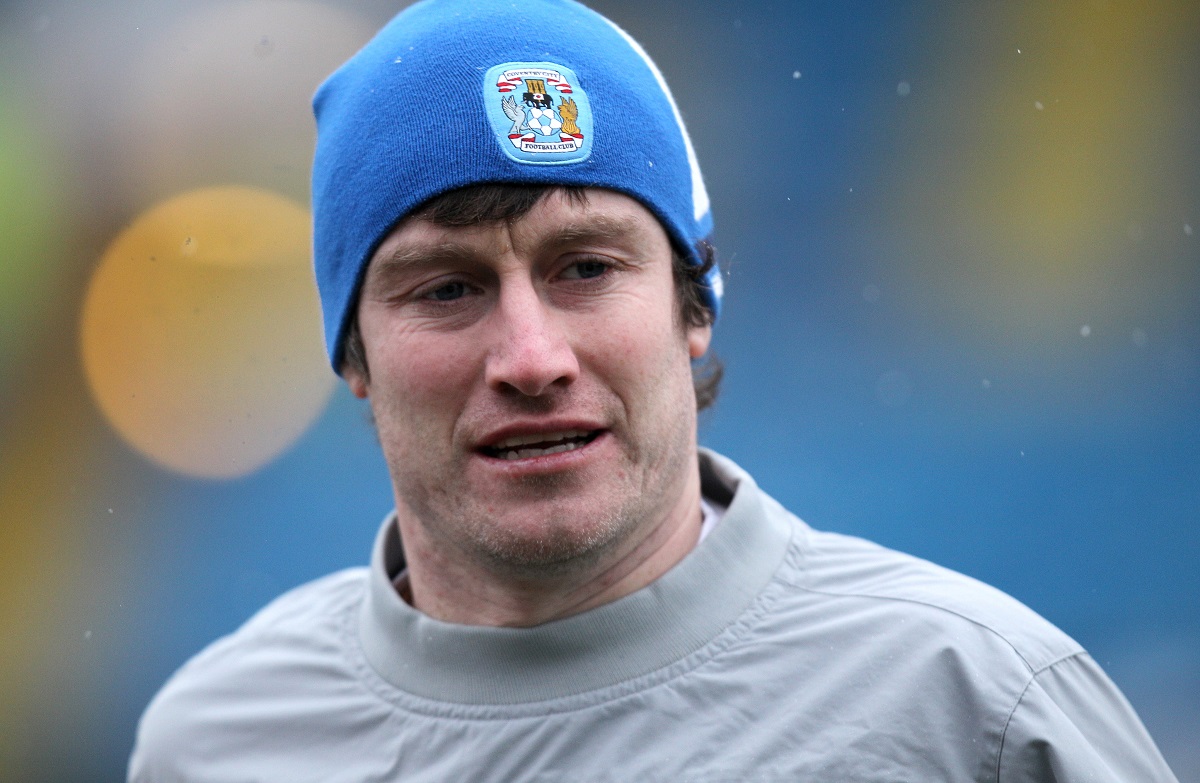 Debuting at Coventry on the opening day of the 2004-05 season – late goals from a Patrick Suffo penalty and Eddie Johnson giving City the points - Elliott went on to score 16 goals as Sunderland won the title.  Relegated immediately in a season where scoring in a north-east derby and against Manchester United were his highlights, Sleeves was a promotion winner again a year later. This time it was under Roy Keane who he had played alongside on the international stage.

As is well known there was no love lost between Keane and Mick McCarthy after the monumental fall out at the 2002 World Cup, but despite Sleeves scoring for Keane’s side the first time Keane and McCarthy met as managers it didn’t stop McCarthy signing Elliott for a second time. Re-joining McCarthy at Wolves in 2007, Sleeves scored his first Wolves goal this weekend in 2007, against Sheffield United, the same team he would fire home his first Coventry goal against. A year after making his bow in Old Gold Stephen was on the move again this time to Preston for whom he scored twice on his return to Molineux.

Next stop was Norwich on loan where he helped the Canaries to promotion from League One in 2010 before going north to Hearts that summer. After a couple of seasons in which he played in the Europa League as well as a successful cup-final he returned to England with the Sky Blues. 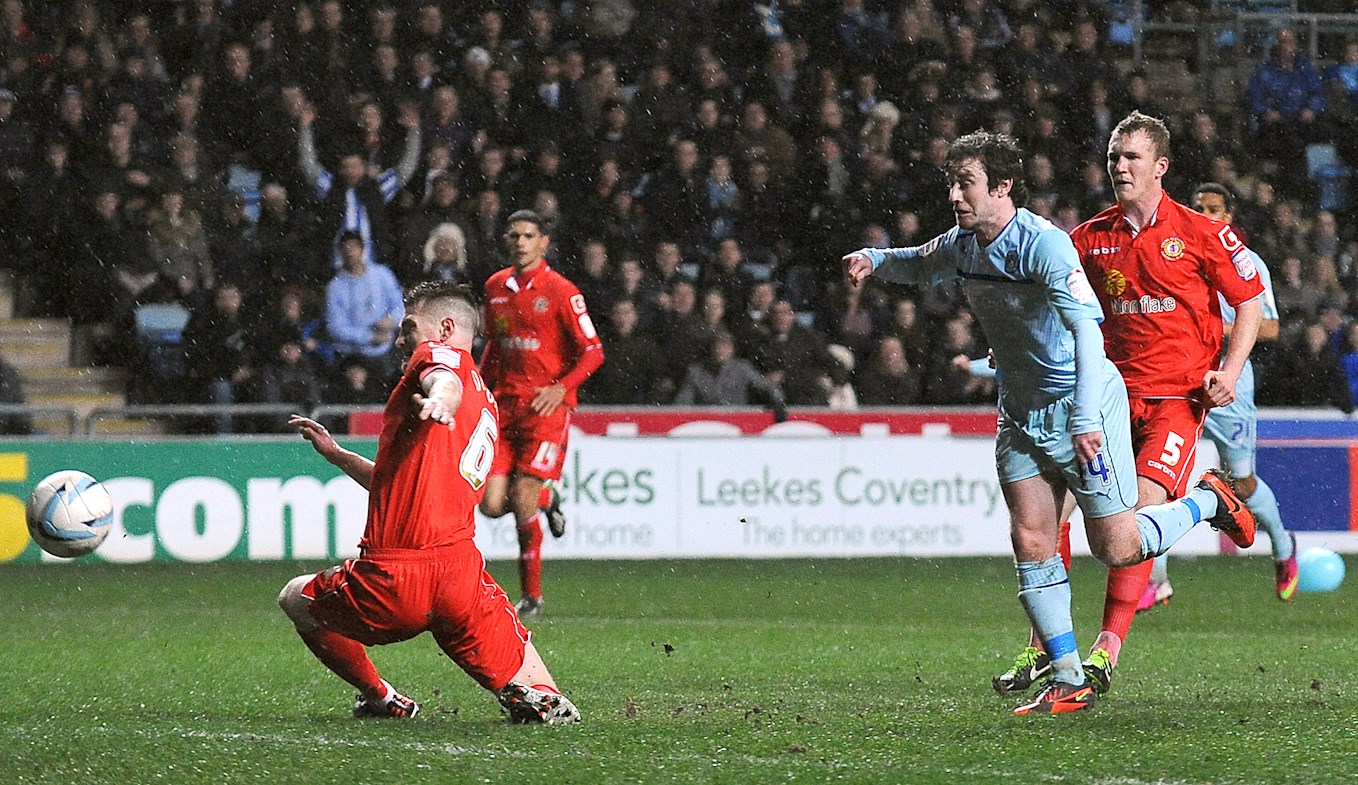 “It was a weird season” recalls Sleeves of his 2012-13 campaign at Coventry in which City finished 15th in League One, reached the Northern Final of the Johnstone’s Paint Trophy and went out to North London giants Arsenal and Spurs in the major cup competitions.

“Andy Thorn signed me but then got sacked very early in the season. Richard Shaw came in as caretaker alongside Lee Carsley and the two of them did quite well. They were good coaches and were well respected in the game.

"After Mark Robins came in we went on a bit of a run. There were some good players in the squad. Carl Baker was there and so was Gary McSheffrey – club legend and a really top player. We had David McGoldrick on loan and Joe Murphy as an international goalkeeper. It was a decent team and a good group of lads.

"At the start of the season there was a feeling around the club that there was a good chance of getting promoted although it didn’t turn out that way in the end. I was injured at the end of the season when Steven Pressley came in so I never really worked closely with him.” 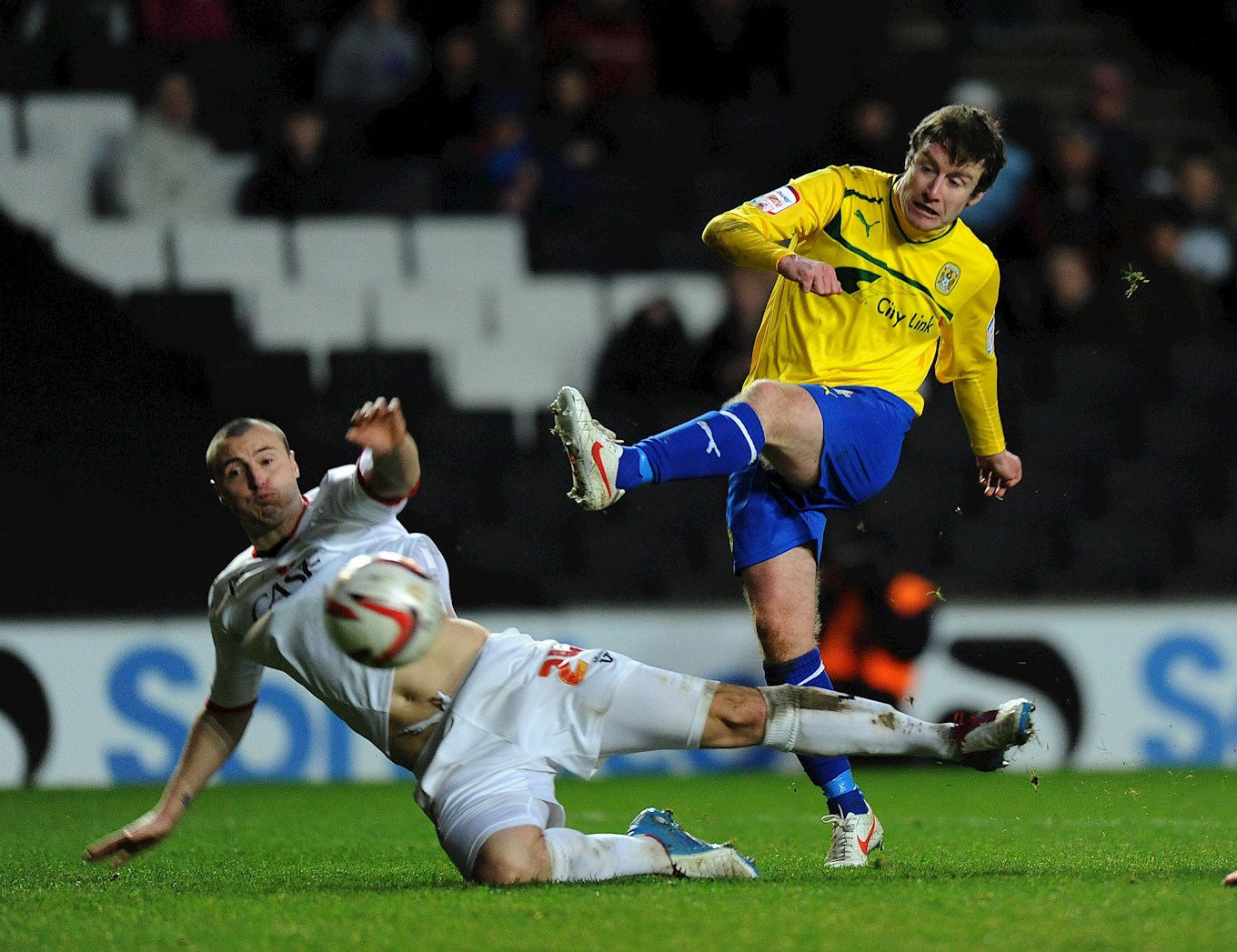 Two goals in a 3-2 win at MK Dons were half of Stephen’s four goals for the club in his total of 14 starts plus 11 games off the bench before that horrendous injury. After finishing his EFL career with Carlisle, Sleeves returned to Ireland to play with Shelbourne and Drogheda before finally returning to the north east of England where he played for Morpeth Town before retiring in 2017.

Having won nine full caps for the Republic of Ireland, famously scoring a key winner in a World Cup qualifying game away to Cyprus, 36-year old Elliott now has a new chapter in his life. “I’m coaching at the moment at an academy up in the north east. I’m concentrating on completing my UEFA badges and doing little bits in the media in the north east and in Ireland. I’m keeping busy which is the main thing you need to do when you stop playing.

"You have to have a reason to get up in the morning because I know a lot of players who don’t know what to do with themselves when they stop playing. When I first stopped playing I was a little bit unsure as to what I wanted to do next because I felt the game had been taken away from me a bit earlier than I would have liked.

"Thankfully I’ve come around now and I’ve had a few years to realise where I want to be going. I feel good and feel I’m on a good path.” 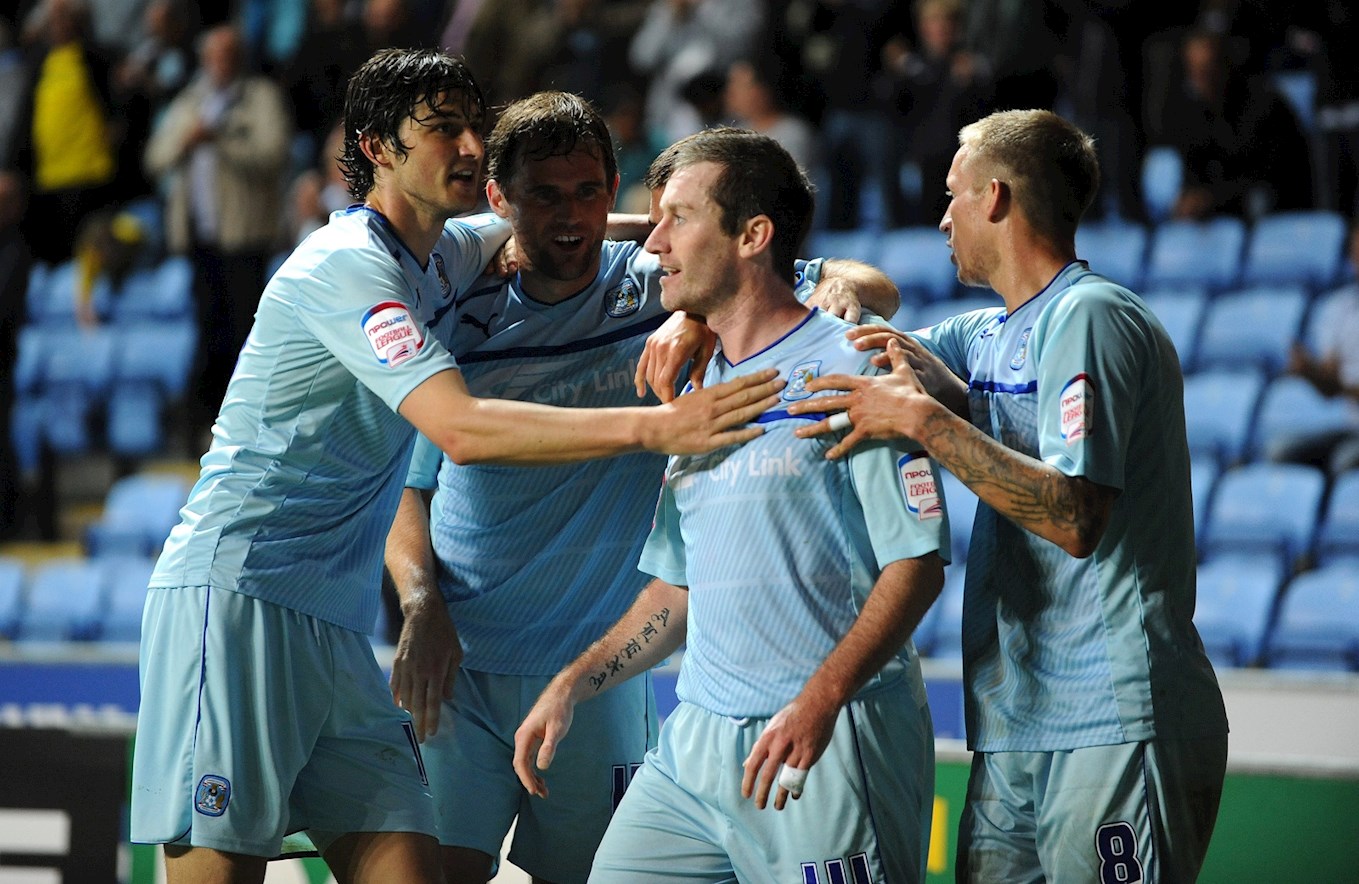 This article first featured in our Matchday Programme PUSB - to get your copy of PUSB, click here.

Our thanks to Sarah Morris and the Coventry City Former Players Association for their assistance with this feature.