On This Day in 1967, Coventry City clinched the Second Division title as goals from John Tudor, Ernie Machin and John Key gave the Sky Blues a 3-1 win over Millwall in front of 32,659 at Highfield Road.

While the famous game against Wolves gave City the advantage going into the final game over their Midlands rival, victory over Millwall sealed the historic title.

It was the first time City reached the top-flight, led of course by Jimmy Hill, and victory sparked jubilant scenes.

England Under 23 goalkeeper, signed from Crystal Palace for a record fee for a keeper in 1964 of £35k. He missed just one game in the 1966/67 Second Division title campaign.

He ended up making 346 league appearances for the Sky Blues, being a stalwart in the top-flight and appearing three times in the Club’s only European campaign – the game he missed through injury being the 6-1 defeat away to Bayern Munich, but he returned as the Sky Blues beat the German side 2-1 at Highfield Road . He is viewed rightly as one of the great Coventry City goalkeepers.

He later ran a hotel in Brighton, then cleaned swimming pools in Benidorm. He returned to UK in 1998, settling in Lincolnshire but still spends much time in Spain.

Long-serving right-back who, like Glazier, only missed one game in the title-winning season.

A youth product at Highfield Road, Nuneaton-born Kearns made his debut in 1957 and played a total of 385 games for the Club and scored 15 goals. His spell encompassed 11 seasons and the Sky Blues journey through the leagues – although when he first signed for the Club, the nickname was still ‘The Bantams’.

A reliable servant to the Club, he retired from playing in 1968 aged 30 as knee injuries caught up with him.

He then ran a bingo hall in Bedworth. After 18 years out of the game, he returned to Coventry City as a coach in 1986, continuing as chief scout. He left the Club in 1992, subsequently working for the Post Office before retirement.

German-born full back, who made his City debut in 1961 aged just 17. He was the Sky Blues’ first substitute when he replaced Ronnie Farmer in a 3-3 draw against Man City in September 1965, and appeared throughout Jimmy Hill’s ‘Sky Blue Revolution.

Dietmar left for Charlton Athletic in 1971 having made 217 appearances (and scoring 8 goals) for Coventry City and been an integral and reliable part of the side for a number of years, both in promotions and establishing City in the top flight, and in qualifying for Europe – he made one appearance in that campaign. He later played for Northampton Town, Nuneaton, Weymouth and Redditch.

He became a financial consultant for an insurance company in Coventry, and after ‘retirement’ worked as a community champion with Tesco in Coventry.

A skilful midfielder who scored 2 goals in 35 league games for Coventry City, having signed from Portsmouth in 1967. He moved to Luton in 1968, then appeared for Oxford United, Colchester United, Portsmouth again and Hastings United.

While at Colchester he took part in one of the great FA Cup giant-killings, when Fourth Division Colchester took on Leeds United in the Fifth Round in 1970–71. Leeds were one of the best teams in the country but Colchester's team of veterans managed to beat Leeds 3–2.

He was a furniture salesman in Portsmouth, Fareham and Christchurch until his death in December 1998 aged 55.

‘Iron Man’ George Curtis was an inspirational defender, captain and symbol for the Club. He was ever-present as the Sky Blues lifted the Second Division title, and in total made 538 appearances for the Club – the second highest of all-time.

One of only a handful of CCFC players who were able to make the transition from Division Four football in 1958 to Division One less than a decade later. He made his City debut in April 1956.

Tragically, George broke his leg at Forest in the Sky Blues second game in the top flight in August 1967 and did not recover a place in the side until towards the end of the campaign. George only remained for the following season before moving to Aston Villa in 1969, hanging up his boots in 1972.

On retirement George came back to Highfield Road as Commercial Manager before becoming Managing Director in 1983. Along with Chief Coach John Sillett, he took charge of team affairs in April 1986 and helped guide the Sky Blues to FA Cup glory in 1987.

Northern-Ireland international Dave was an integral part of the side, playing 230 league appearances for the Sky Blues between 1964-71 and scoring 34 goals. He was a strong, tenacious player remembered most for his surging left wing runs and crosses, and part of the European campaign in 1970-71.

Playing spells at Sheffield Wednesday, Everton, New York Cosmos and Colorado Caribous  followed. Clements managed Northern Ireland from 1975-76, while still playing for Everton, taking over at the age of just 29. He managed several sides in the USA, the last being the University of Denver from 1991-94.

He also ran an Irish goods store in Georgetown, Colorado and still lives in the USA.

Key started his career at Fulham, moving to Coventry City in 1966 after making 181 appearances for the Craven Cottage side.

Key will always have a place in Sky Blues history by scoring the first ever top flight Highfield Road goal on August 26th 1967, in a 2-2 draw against Sheffield United in Division One.

He scored a total of 7 goals in 28 league games for City before moving to Leyton Orient in March 1968. He made only a dozen more appearances there, before retiring through injury.

Once retired, John became a London black cab driver from March 1972 for over 20 years.

Ernie made 289 appearances for the Sky Blues, scoring 39 goals and will be remembered for taking over the club captaincy from another legend George Curtis in 1967 when George suffered a broken leg. His leadership is cited as instrumental in the Sky Blues surviving in the top flight in those early seasons.

He signed for City in 1962, when Coventry City scout Alf Walton recommended him to Jimmy Hill, and made his debut in April 1963. He was a key, talismanic midfielder in Coventry's promotions from Division Three in 1964 and Division Two in 1967, and part of the team in City’s first and only (to date) European campaign in 1970-71.

In 1977 Jimmy Hill, by now the chairman at Highfield Road, persuaded Ernie to return to Coventry City as youth team coach. It didn’t work out however and he left football and worked for Car Bodies and Massey Ferguson.

After a period of ill-health, Ernie sadly passed away in July 2012 aged 68.

John joined Coventry City in 1965. He made 77 appearances in total for the Sky Blues, scoring 15 goals before moving to Sheffield United in November 1968. He hit the headlines at his next club Newcastle Utd, where he became part of a feared striking duo with Malcolm Macdonald. From 1971 to 1976 he played 187 games for the Magpies and scored 56 goals, reaching the FA Cup Final in 1974.

Later playing for Stoke and Ghent, he then became a publican in Derbyshire and Northumberland.

Moving to the USA, John became Director of Youth Development for Tonka United  and CC United from the 1990s until retiring as a  full time community based ‘soccer’ coach less than a decade ago. Still living in the USA, he came back to the UK to watch the Sky Blues Checkatrade Trophy success in 2017.

Starting his career at Accrington Stanley, Scotsman Ian then moved to Bradford Park Avenue before moving on to Teesside. Signed from Middlesbrough for a then club record fee of £57,500 in 1966, the popular mercurial inside forward was a key member of the Jimmy Hill’s side that won promotion to Division 1 (he scored in the famous game against Wolves in 1967) and then the early Noel Cantwell sides that consolidated that place in the top Division and qualified for Europe – though he left before that campaign.

From 1966-70 Ian scored 15 times in 104 first team appearances before moving on to Cardiff City and finishing his professional career with Bournemouth. He later appeared for Berea Park, Gateshead and Whitby. He worked on gasometers, living in Redcar.

Welsh winger Rees was youth product at City, and given his debut by Jimmy Hill in May 1962.

He was ever-present in City’s 1963/64 Third Division title triumph, form which earned him the first of 39 Welsh internationals caps.

He set up many goals thanks to his speedy wing play which tormented many full-backs and he scored a vital goal in the famous 3-1 victory over Wolves before Highfield Road's record gate in April, 1967.

In 1968, with Noel Cantwell keen to strengthen the side, Ronnie was the only saleable asset and was allowed to join West Brom for £65,000. In total for City, he scored 42 times in 230 league games.

He later played for Nottingham Forest, Swansea City and Merthyr Tydfill. He then became a machinist at Ford in Swansea and Bridgend. He had to retire at the age of 51 after a stroke. 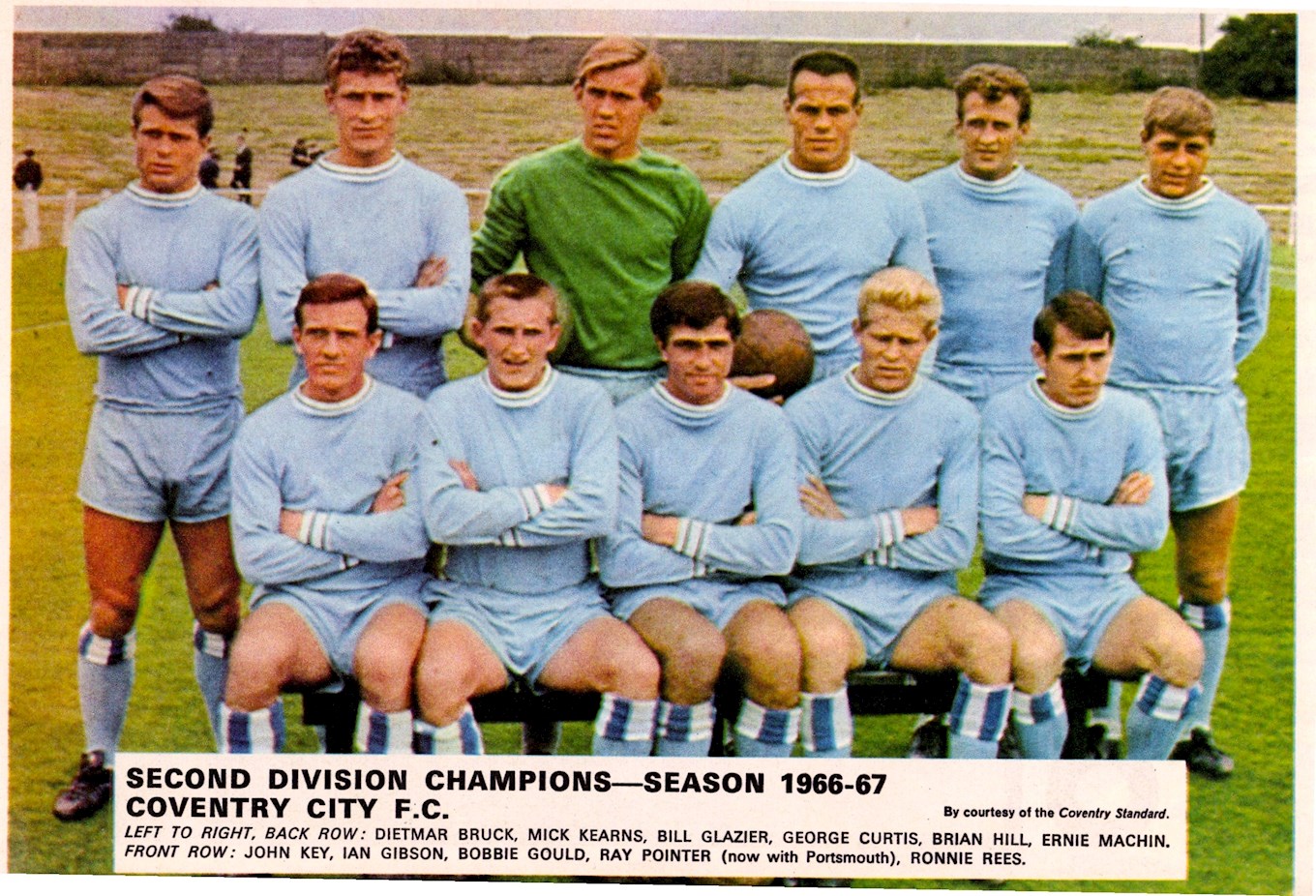