In a feature first published in PUSB, writer Rob Mason investigates international players who represented their country while on Coventry’s books - this time, it's Michael Mifsud...

Being 38 isn’t stopping Michael Mifsud from playing international football. The Malta captain is currently on the books of Birkirkara in his home country and has won three of his 142 caps this season, most recently against Norway in a European Championships qualifying game last November. He turned 39 last month.

It is over a decade since the 5’5” forward, nick-named the mosquito, left Coventry in January 2009.

In January 2007 he joined, debuting against Crystal Palace and scoring his first goal on his second appearance, his away debut at Plymouth. Mifsud had been signed from Norwegian club Lillestrom where he had caught the eye in a couple of summer Intertoto Cup games against Newcastle. 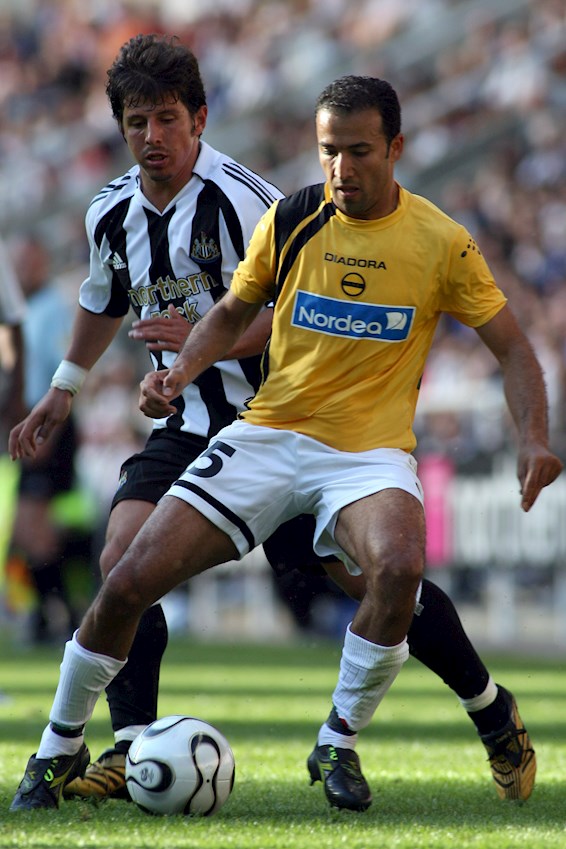 Born in Pieta, on the outskirts of the Maltese capital Valletta in April 1981 Michael started with Sliema Wanderers, the Mediterranean island’s most successful club. Coming into the first-team as a teenager in 1997-98 he scored the first goal of his career in April 1998 against Xghajra Tornados and went on to score three goals for every four games he played as Sliema continued to dominate Maltese football. Regular qualifiers for Europe, Mifsud’s men faced FC Zurich and  FK Partizan in the UEFA Cup during his time there.

Michael’s goals also led to full international recognition, with a debut coming against Albania in February 2000. It was not a case of Mifsud bursting onto the international scene. The Maltese FA were fully aware of Michael’s development as he had made 11 appearances at Under 16 level, played five times for the Under 18s and won 16 Under 21 caps. The surprise was that he only found the back of the net once in each age group but a goal a week after his 20th birthday in a World Cup qualifying game with Iceland further enhanced his reputation.

It was Andreas Brehme - the man who scored the winning goal in the 1990 World Cup final - who signed Mifsud for FC Kaiserslautern. The step up was too much for young Michael. He still found the net regularly at second team level, netting 21 times in 50 appearances but for the first team there were only two league goals in 21 outings, at Hansa Rostock and Wolfsburg.

After three seasons in Germany during which he was twice voted Maltese Sports Person of the Year it suited both club and player for Michael to return home where he quickly showed he hadn’t lost the goal touch, scoring eight goals in a dozen games to help guide Sliema Wanderers over the line for the Maltese league title.

Michael’s stay back in Malta was a short one as he quickly got the opportunity to return to mainland Europe, this time in the less demanding surroundings of the Norwegian Tippeligaen, signing for Lillestrom SK where he played for Uwe Rosler. Michael’s second season saw him help Lillestrom reach the Scandinavian Royal League Cup final only to lose to a late goal when Ghana international Razak Pimpong scored for FC Copenhagen. Finishing fourth in the table enabled Michael to appear on the European club stage with those Intertoto Cup games against Newcastle, having been his club’s top league scorer with 11 goals from 24 games.

Shortly after Uwe Rosler left to effectively swap jobs with Viking FC boss Tom Nordlie, Mifsud was on the move himself, this time to Coventry after being voted the best foreign player in Norway in 2006. He had continued to play regularly at international level and managed to reasonably regularly find the back of the net despite playing for a team where chances were at a premium. Nonetheless a goal against Bosnia- Herzegovina in a European Championships qualifying game three months before his move to Coventry did Michael no harm. 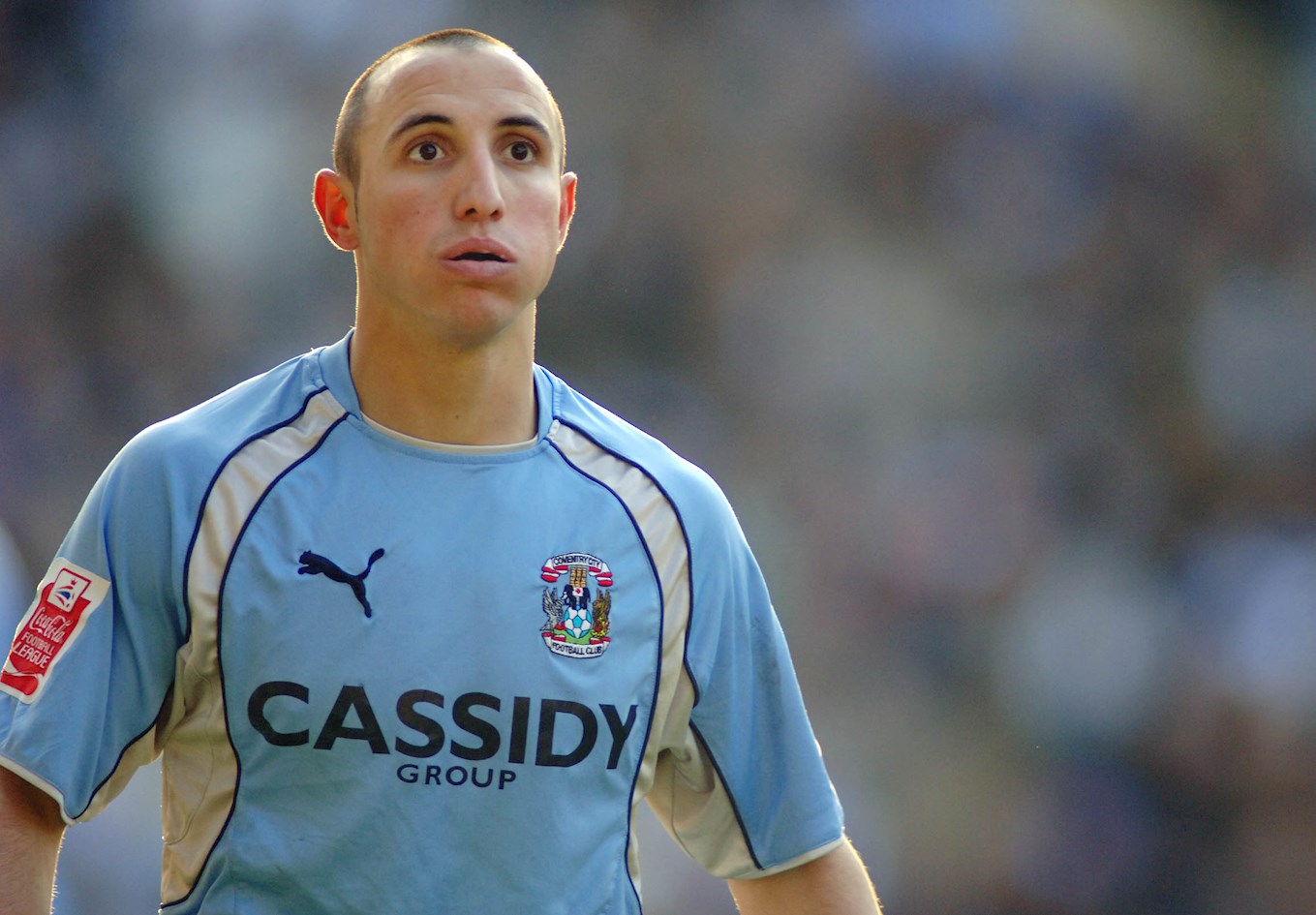 Coming to a new club is always a challenge and a player puts trust in the man who signed him. Two days after Mifsud arrived in the Midlands manager Micky Adams was sacked. Nonetheless a goal after coming off the bench for his second appearance illustrated that the man from Malta had something to offer. By the time of Michael’s second goal on his 12th appearance in a big home win over Barnsley new manager Iain Dowie had been in post for a month.

A week after that strike against the Tykes, as a Coventry player, Michael appeared in a European qualifier away to Moldova. There would be two more summer caps won as a Sky Blue but home fans had yet to see Michael find the back of the net, although there had been two more City goals on the road.

By the time Ricoh regulars saw Michael score it was the goal that took him into double figures for Coventry but by then he was a hero. Four days before his first Ricoh goal he had scored twice as City sensationally beat Sir Alex Ferguson’s  Manchester United 2-0 at Old Trafford in a League Cup tie. After a lengthy playing career the Maltese international must have many soccer souvenirs but only he knows how he doesn’t have the match-ball from that night as he fluffed a great late  chance for his hat-trick, not that Coventry’s vast following were complaining as they celebrated a famous victory. 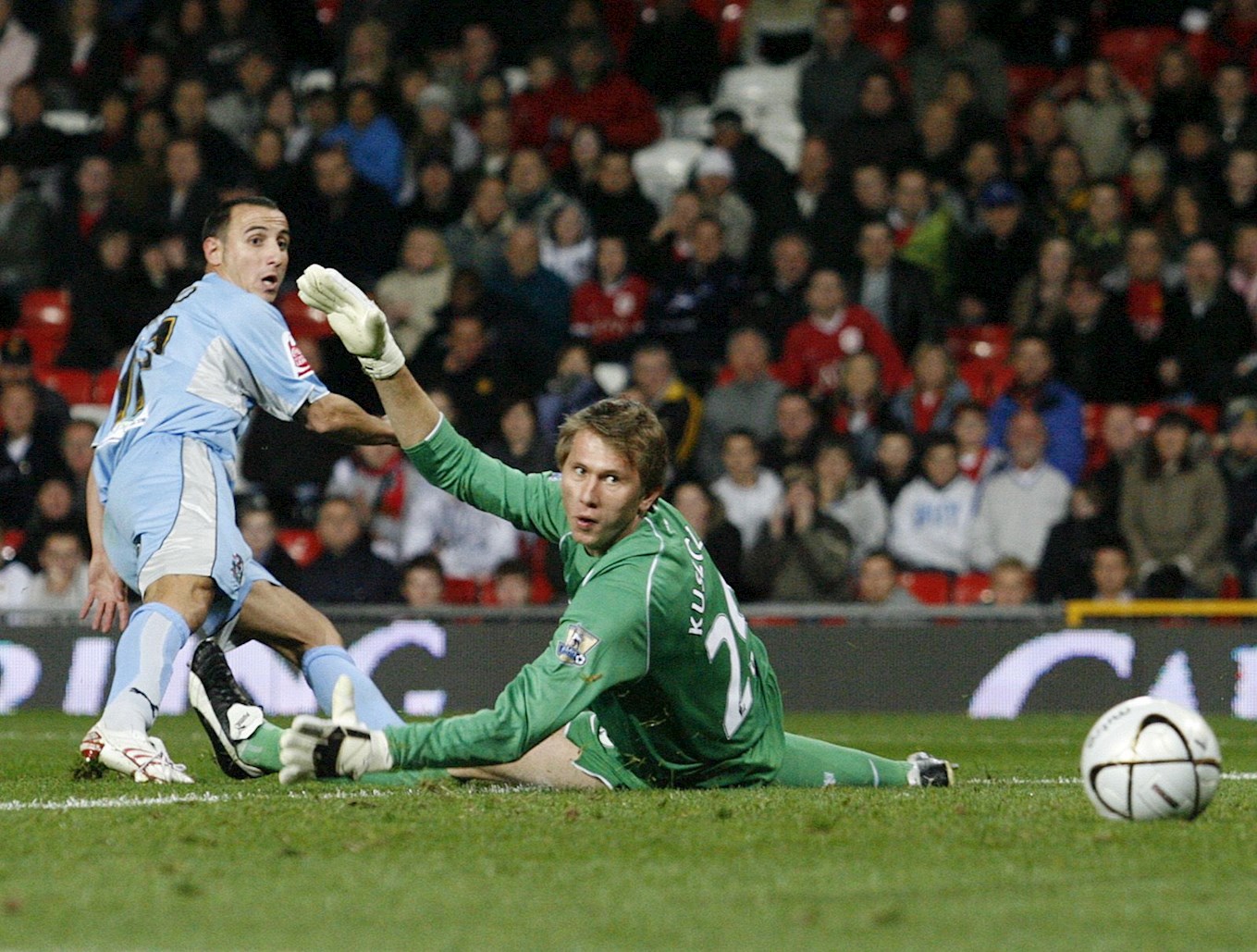 That 2007-08 campaign was a successful one on a personal level for Michael as he ended up with 24 goals from 53 games for club and country. Seventeen of those goals for Coventry making him far and away City’s top scorer in a season where Chris Coleman succeeded Dowie. In March the Mosquito scored five goals for Malta in a 7-1 Friendly victory over Liechtenstein where he had claimed his hat-trick before the game was quarter of the way through. In scoring five Mifsud became only the second player from his country to achieve the feat, after Dione Lautier.

While Michael scored on the last day of the season at club level; when Coventry only remained in the Championship courtesy of results elsewhere, goals had been harder to come by in England. It was his first league goal since before Christmas and that drought continued into the following season. Having wanted a move to Bristol City and seen it fall through, Michael waited  until October to get onto the score-sheet, a goal in a 2-1 defeat at Wolves was one of only three league goals he would score in his final 50 league appearances for the club. 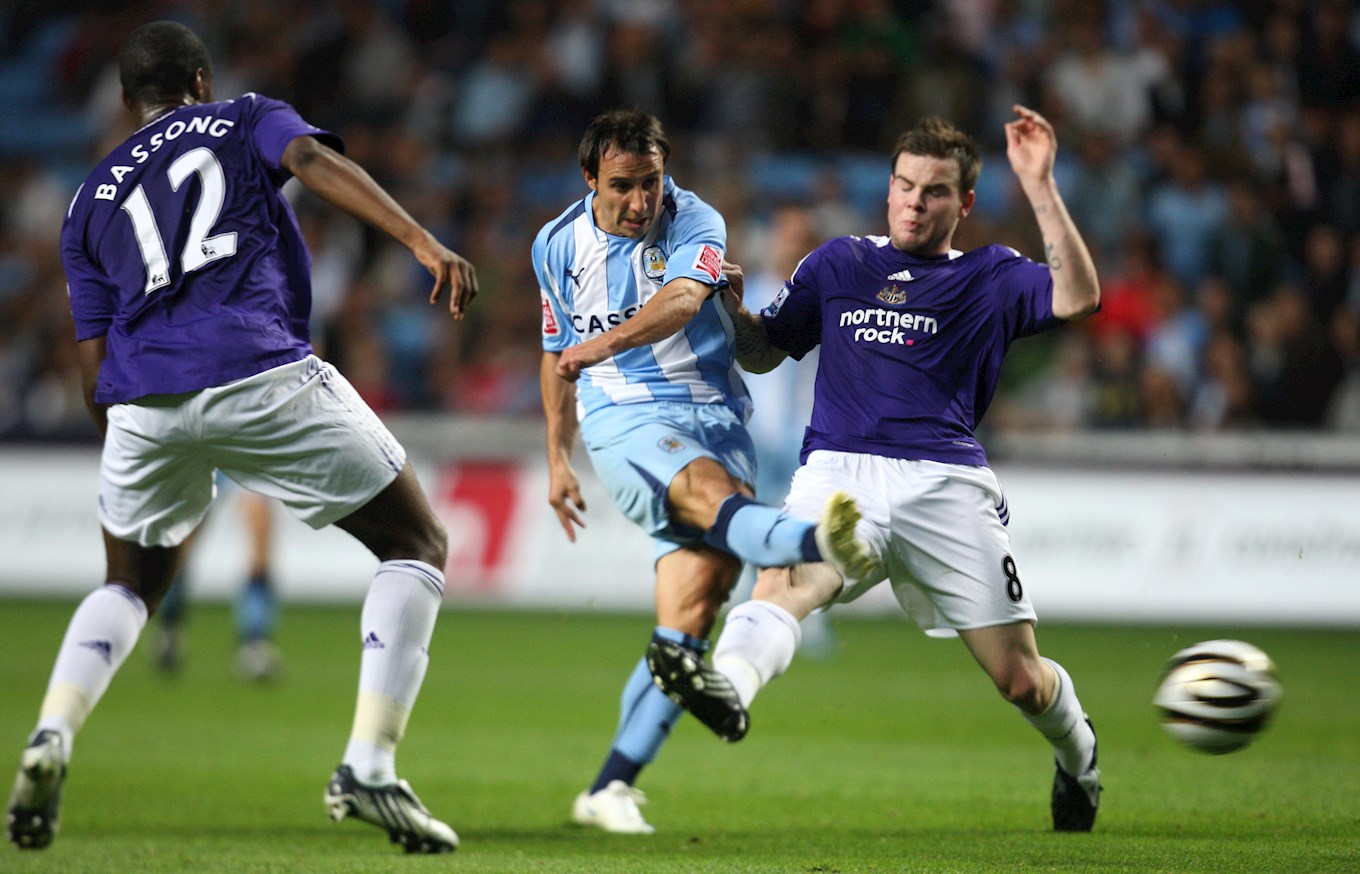 In February 2009 he was loaned to Barnsley where he got a couple of goals in his opening seven games but no more in his remaining eight appearances before returning to Coventry in the summer. At this point he was released by the club having scored 23 times in 95 games. During Mifsud’s time with the Sky Blues he played in 12 competitive games for Malta, scoring twice. 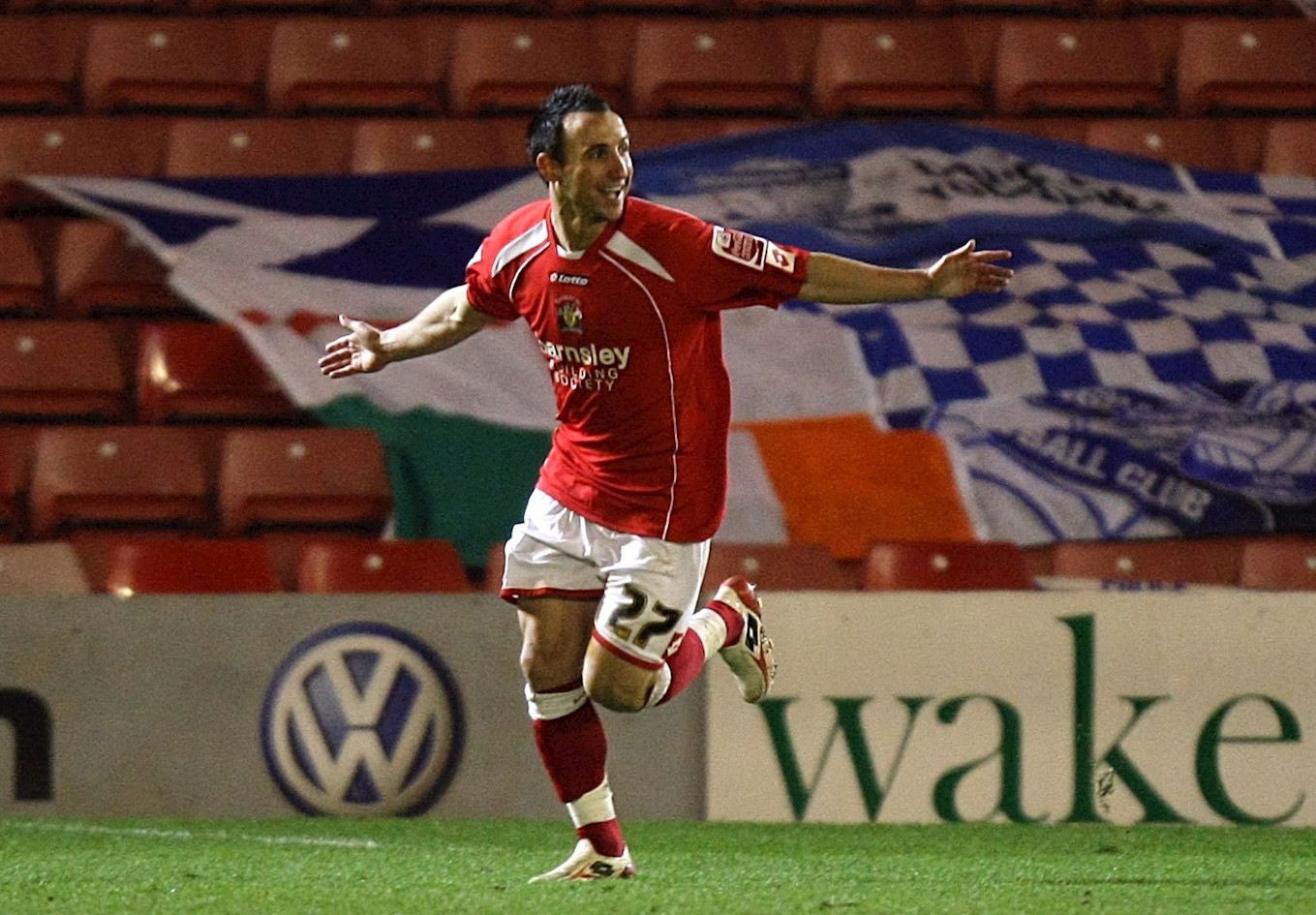 Having left Coventry Mifsud returned once again to Malta the following year, signing for Valletta. It was in the same year that he became his country’s all-time leading scorer, a goal in a friendly against Finland breaking Carmel Busuttil’s record. In 2011 Michael moved to play for another Maltese outfit, Qormi FC for whom he debuted with a hat-trick against his current club Birkirkara. Despite that great start he soon made a swift return to Valletta who he helped to the Maltese title in 2012 with a dozen goals from two dozen games.

Amongst many records Mifsud holds is being Malta’s top scorer in the Champions League / European Cup where he has eight goals in qualifying games. Four of these came in one match during that title winning campaign against the Andorran club Lusitanos, who three years later lost only 4-0 over two legs to West Ham in the Europa League.

The goals kept coming at international level too. Following a historic goal that gave his international side a World Cup qualifying victory away to Armenia early in June 2013 Mifsud made it clear he would like to try his luck abroad once more. This time he went down under, joining Melbourne Heart in September 2013. He was only in Australia for six months but while he was plying his trade there he returned to Europe to mark his 100th international appearance with a goal in a 4-1 defeat at the hands of the Czech Republic.

Returning to Malta in March 2014, three months later he re-joined Sliema Wanderers. Although he had to wait until November for his first goal of  his third stint with the club, a couple of months earlier he hit another international landmark with his 40th international goal in a European qualifier with Azerbaijan.

There was to be a third spell with Valletta too. Joining them in January 2016 he was still on their books the following October when he returned to England, coming off the bench for the final 15 minutes of a respectable 2-0 defeat to England at Wembley, in Gareth Southgate’s first game as Three Lions manager. 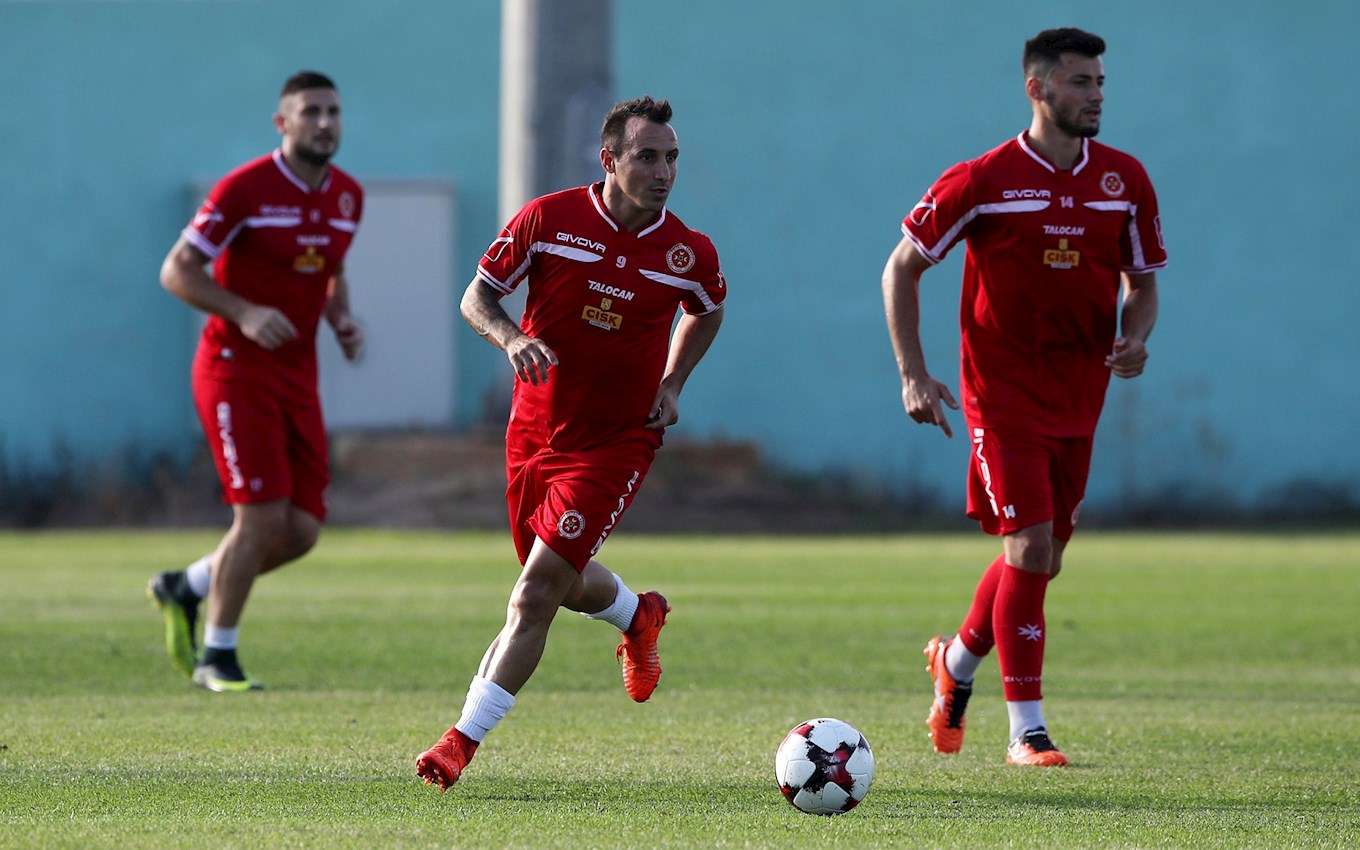 The Michael Mifsud story didn’t end under the Wembley Arch although it would have been a fine venue for him to sign off. Instead he went on to win another league title with Valletta in 2017-18 before joining his current – and possibly last – club Birkirkara. A year gone November he scored the 300th goal of his career for Birkirkara v Mosta and has since gone on to surpass the previous Maltese record of 306.

Michael remains an ever popular player at Coventry, despite a disappointing departure from the Club, with his exploits at Old Trafford give him a place in Sky Blue folklore. He is obviously a major figure in Maltese football but is not universally appreciated. Mifsud skippered his country over 50 times but has a rivalry with another Malta captain Andre Schembri (Best known for his time with Boavista in Portugal ) who was very critical of Mifsud in an autobiography published in 2018.