In a feature first published in PUSB vs Lincoln this season, writer Rob Mason investigates international players who represented their country while on Coventry’s books - this time, it's David Phillips...

Always a dependable team player who would do a good job in virtually any position, David Owen Phillips won the FA Cup with Coventry, promotion to the top flight with Manchester City and Nottingham Forest, became a record buy for Norwich who he helped to third place in the inaugural season of the Premier League and eventually totalled 62 full international caps.

Born in Wegberg in Germany, at an RAF base where his father was stationed, Phillips began his football career as an apprentice with Plymouth Argyle. Former Scotland captain Bob Moncur gave David a debut on the opening day of the 1981-82 season, a month to the day after his 18th birthday.

After coming off the bench to replace midfielder Jeremy Collins in a 1-0 third division home defeat by Oxford United, a week later he again played as a sub in another 1-0 loss, this time to Burnley. While they would finish in the top half of the table Argyle struggled badly early on. By the time Phillips scored on his full debut against Gillingham in October his side had taken just two points and scored only three times in their opening eight games.

There would be 16 appearances spread over 19 months for the youngster before a game at Lincoln proved to be the break-through to him becoming a regular. After coming off the bench to net the winner in a 2-1 win at Sincil Bank in February he went on to score three goals in the next two games, start every game for the rest of the season and end the campaign with eight goals – just three behind top scorer Kevin Hodges despite playing only half as many games. 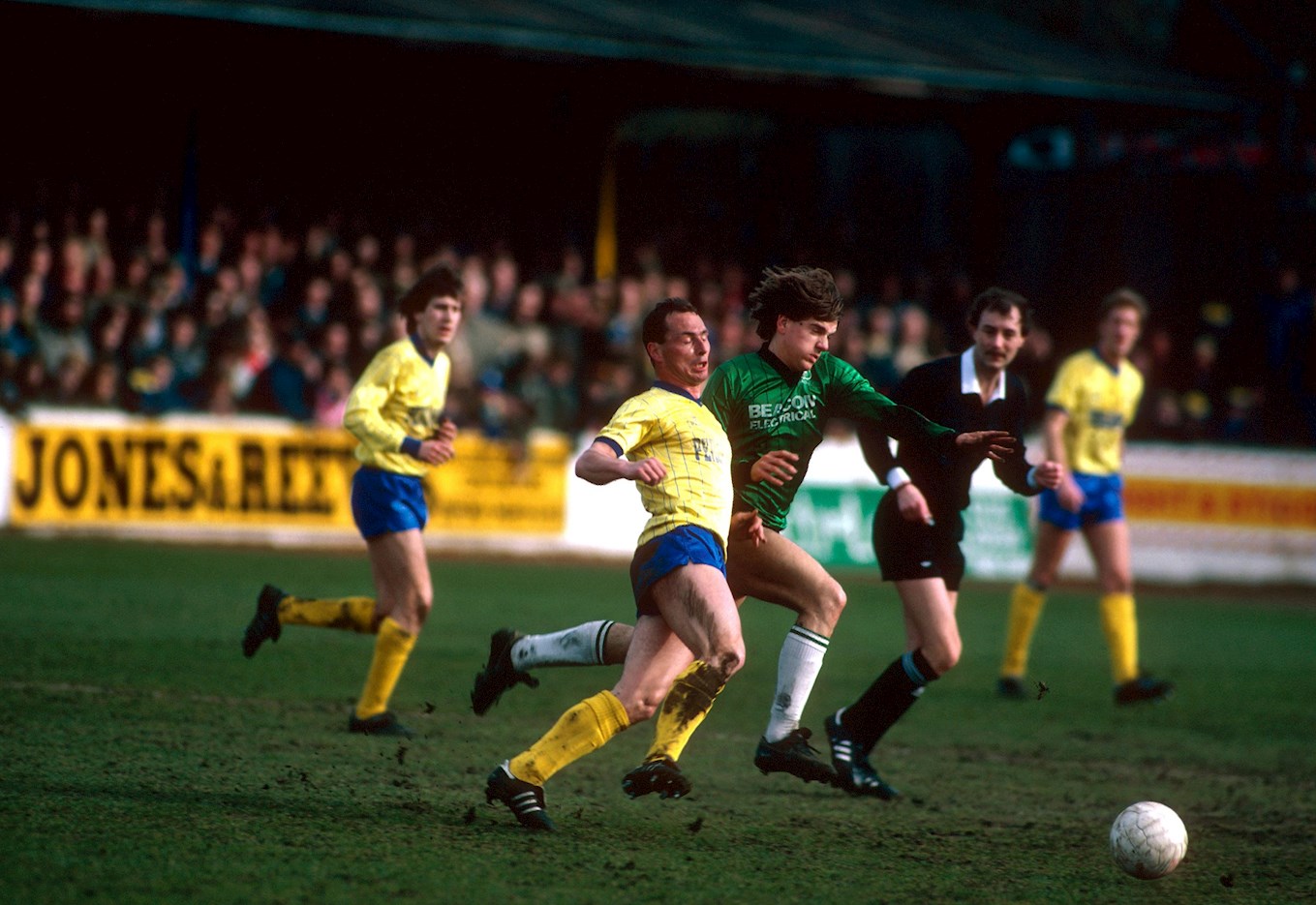 The following 1983-84 season would be Phillips’ last at Home Park. His talent attracted inevitable attention, not least as Plymouth came to the fore in reaching the FA Cup semi-final. David played all 10 games as Argyle’s cup run culminated in defeat to Watford at Villa Park. Although they struggled in the league Plymouth also lost by just one goal over two games to Arsenal in the League Cup, as well as reaching the semi-finals of the Associate Members’ Cup.

A fortnight after appearing in the FA Cup semi-final Phillips was given a full international debut by England – manager Mike England that is, who selected the third tier player for Wales against Bobby Robson’s England.  Already capped at youth and Under 21 international he was played at right back, Wales winning 1-0 with a goal from Mark Hughes. 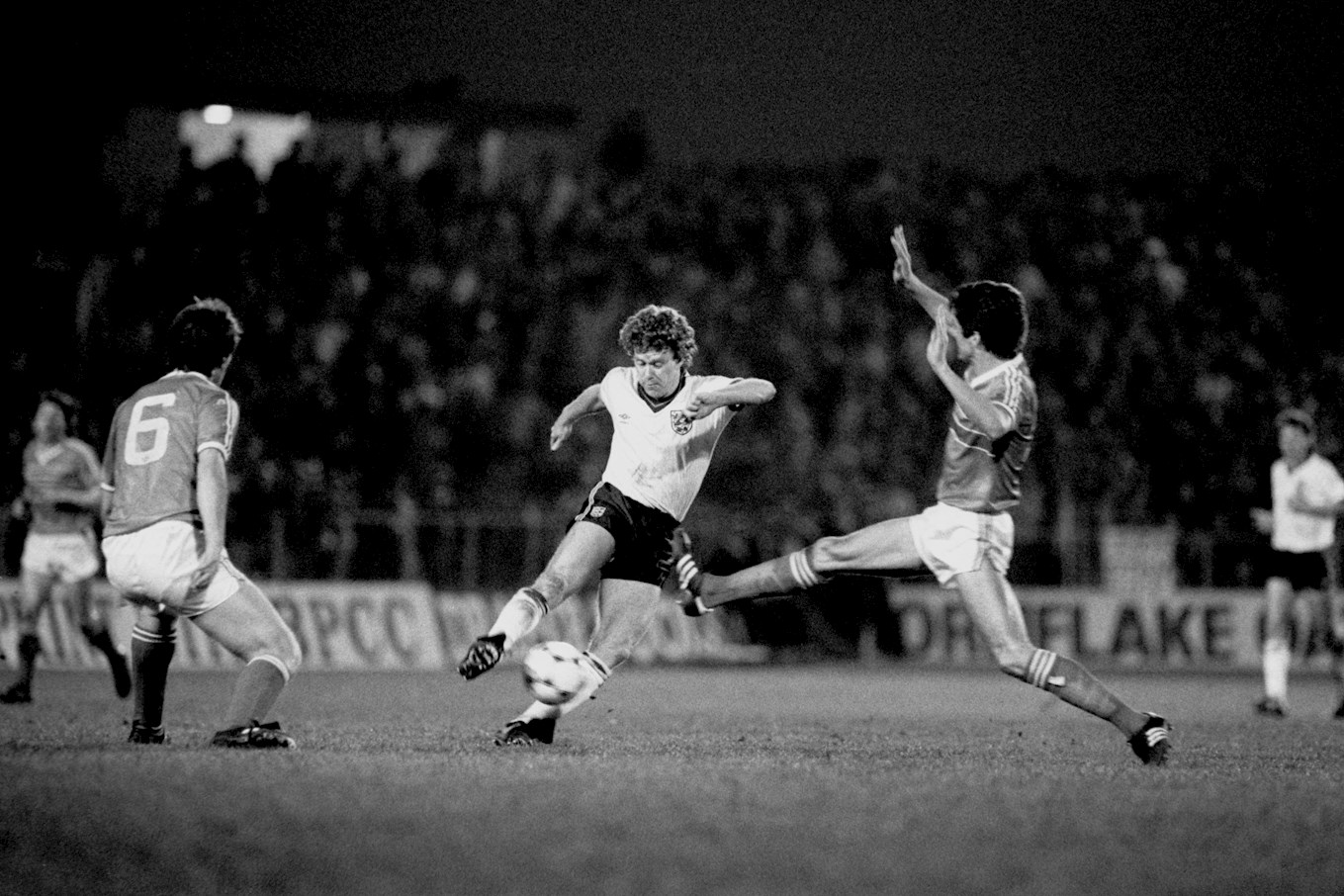 There would be just five more appearances for Argyle after Phillips won his first senior cap but there would be another two caps won as a Plymouth player. With team mates including current Portsmouth manager Kenny Jackett as well as Ian Rush and Everton pair Neville Southall and Kevin Ratcliffe, Phillips played in a 1-1 draw with Northern Ireland at Swansea and a 1-0 loss to Norway in Trondheim when he had to go off after half an hour.

By the time of his fourth cap against Spain in Seville in October 1984 David was a Manchester City player. Signed by Billy McNeill MBE Phillips would debut at Wimbledon on the opening day of the season and go on to be joint top scorer with 12 league goals as the Citizens won promotion to the top flight – two of those goals being on the last day of the season as Charlton were beaten 5-1 as Pompey were pipped to promotion on goal difference – Phillips having scored in a crucial late season victory at Fratton Park.

The season also brought Phillips to Coventry for the first time, playing in a 2-1 defeat by the Sky Blues in the third round of the FA Cup. Coventry would also be the venue of Phillips’ top-flight debut on the opening day of the season. It would be April before David missed a game as Man City established themselves at the higher level – featuring in a best of season 5-1 win over Coventry 24 years ago last week. Playing mainly at right back the only goals he notched came in the Full-Members Cup, scoring in both legs of the northern final against Hull before playing at Wembley in a 5-4 loss to Chelsea in the final – David Speedie getting a hat-trick for the Londoners.

Having played 93 times for Plymouth, Phillips fell one game short of a century for Manchester City but he would manage 100 in league games alone at his next club: Coventry. By the time of his move to the midlands in June 1986 David had been capped 11 times but hadn’t played for Wales since a February friendly against Saudi Arabia in Dhahran and hadn’t taken part in Wales’ summer tour of Canada. 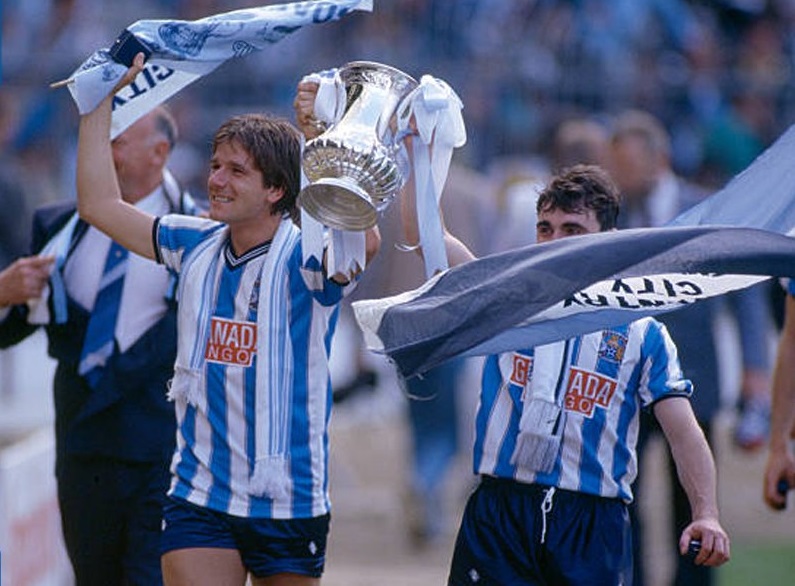 As at Manchester City, David’s first season at a new club would be one of success. He played all six games as he became a Sky Blue immortal as the club triumphed in the FA Cup. In the league he missed just three games, enjoying his return to Manchester by helping in a 1-0 win at City in only his fifth game, before getting his first goal in a draw on a visit to the red half of Manchester. Of more significance were his first goals at Highfield Road, a brace in a win over Norwich, a performance which evidently stuck in the minds of the Canaries.

Consistency for Coventry culminated in a first cap won with the club. Whereas his first cap had come shortly after playing in an FA Cup semi-final for Plymouth, this one came under a fortnight before City’s cup semi-final with Leeds. David returned to international action with a first goal for his country in a 4-0 win over Finland at Wrexham in a European Championships qualifying game.

Little more than a fortnight before the cup final against Tottenham Phillips was required on international duty again, thereby missing a league win at Watford as he played in a 1-1 draw with Czechoslovakia.

Further caps were won while with Coventry over the next two seasons. Two appearances against Denmark preceded a return to Czechoslovakia in Prague. That was lost as were the next two games against Yugoslavia and Sweden. Following the 4-1 loss to the Swedes in Stockholm in April 1988 David didn’t play internationally for a day short of a year. After missing five games he was brought back for the return with Sweden but was subbed after an hour in a 2-0 defeat.

After playing in a heartening World Cup qualifying draw with West Germany while still with the Sky Blues Phillips played in a defeat to Finland in Helsinki but by then he was no longer a Coventry player having been sold to Norwich City for a Canaries record of £550,000 in July 1989. It took Phillips just three minutes to score for the Carrow Road club, setting them up for a 2-0 win over Sheffield Wednesday. He had left Coventry having expressed a wish to play more in central midfield but in Norfolk mainly found himself partnering international team-mate Mark Bowen on the left flank.

The highlight of a successful stint in East Anglia came in 1992-93. This was the first year of the Premier League. With nine goals - including a couple of spot-kicks - Phillips was second top scorer as Norwich qualified for Europe after finished third having topped the table for much of the winter. The only man to outscore Phillips? Mark Robins.

While Norwich would go on to sensationally knock Bayern Munich out of the UEFA Cup before meeting Inter Milan, Phillips had left the club by then, returning to what is now the Championship with Nottingham Forest following a reported contractual dispute with Norwich. Once again he enjoyed instant success with his new club.

Debuting in a 5-3 win over Grimsby he went on to become Player of the Year – ahead of the likes of Stuart Pearce and Stan Collymore – as Frank Clark’s Forest returned to the top flight. Having finished third in the Premier League with Norwich Phillips missed just four games as he reached the same position in Forest’s first season after promotion, still being a regular international as he continued to impress at the top level.

The 62nd and final full cap of Phillips’ career came in Terni, Italy in January 1996 at a time when he was out of the Forest side. Goals from Alessandro Del Piero, Fabrizio Ravanelli and Pierluigi Casiraghi, without reply, brought the curtain down on what had been a tremendous international career, nine of those caps having been won with Coventry. 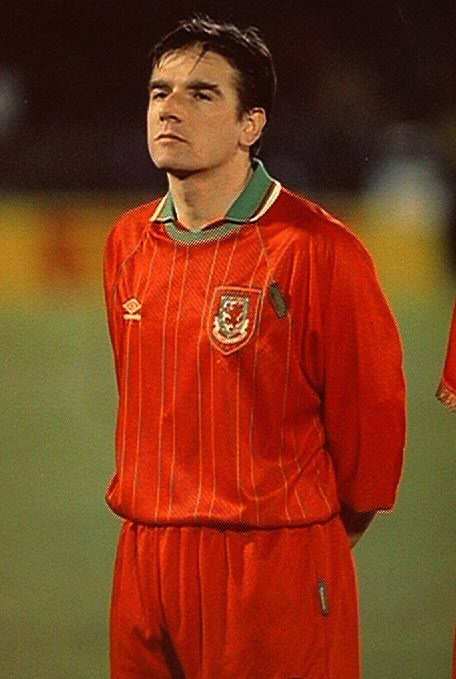 Phillips remained with Forest until November 1997 when he moved on to Huddersfield Town where played just over 50 games before signing for Lincoln City in March 1999. The Imps were struggling at the wrong end of what is now League One when Phillips arrived. Debuting in a 2-1 home defeat by York he would play seven times but be unable to stop Lincoln sliding to relegation.

In what would be David’s final season as a Football League player in 1999-2000 he didn’t appear until November. There would be just six starts and a couple of substitute appearances - his final start and penultimate appearance in total coming back at his first club Plymouth in March 2000, an appropriate place for his 600th league appearance. 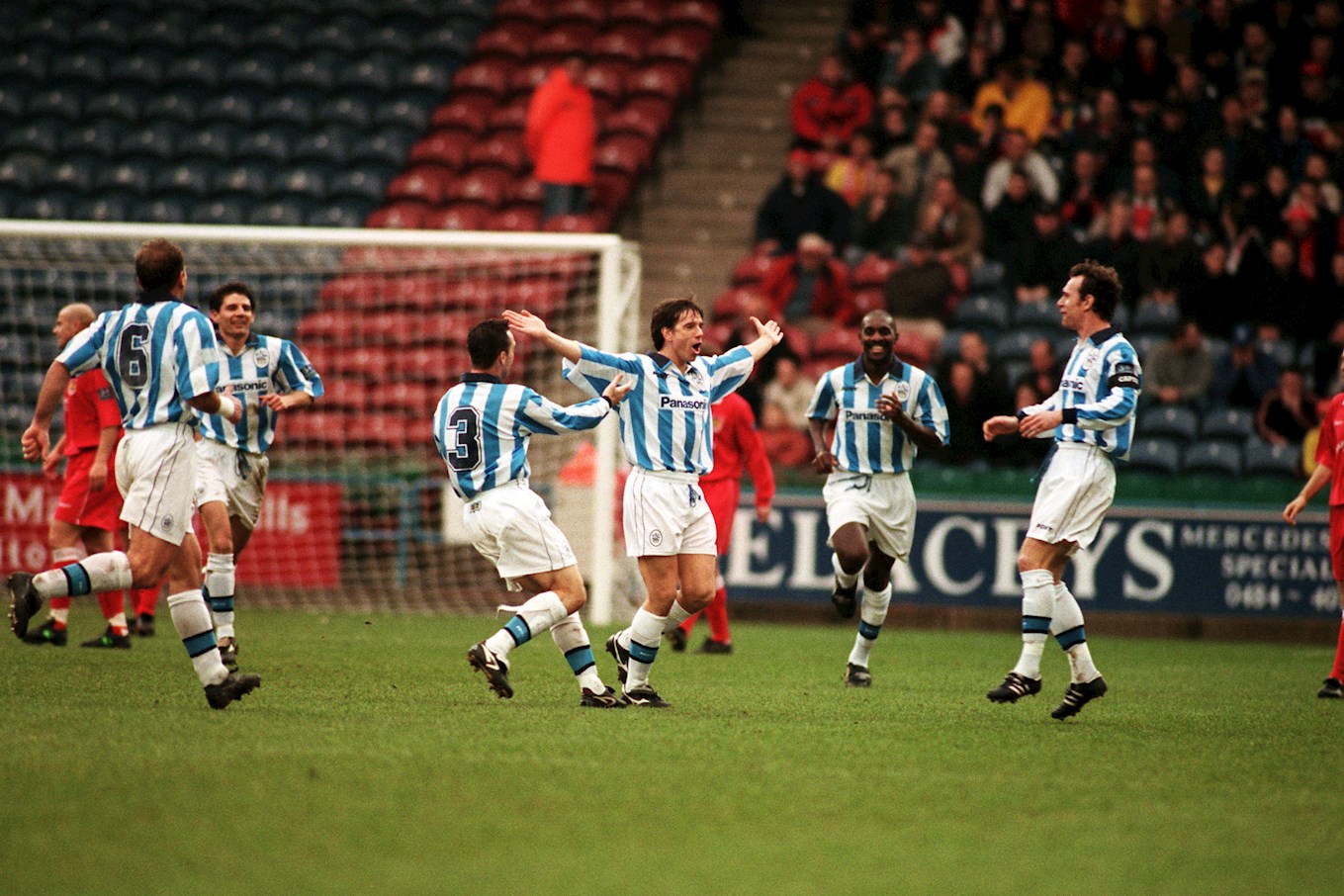 Having turned 37 by the start of the following season he had one last year as a player, appearing 19 times in the Conference as he helped Stevenage Borough to seventh place.

A great crosser of the ball who had a penchant for spectacular goals, David Phillips was a terrific servant to Coventry City and saw his son Aaron top a half century of appearances for the Sky Blues in the early part of this decade.