While ideally you’d never leave it that late, those occasions bring their own enjoyment (eventually) and memories as City’s players demonstrated the courage and determination to get the required result. 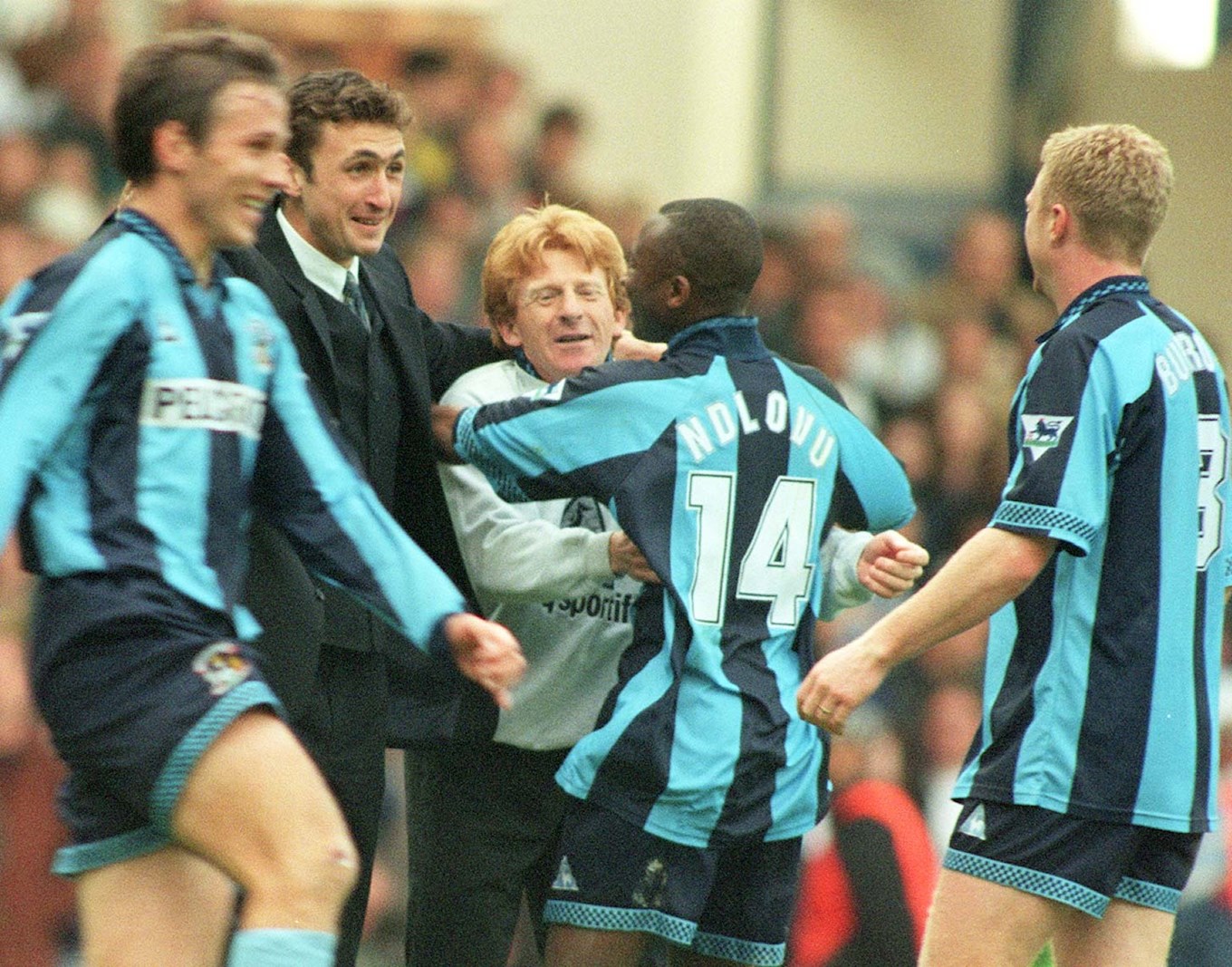 WATCH HIGHLIGHTS FROM THE GAME ON OUR YOUTUBE CHANNEL HERE

In all of the final day escapes the Sky Blues had over their top-flight days, there are not many that compare in tension to this Sunday at White Hart Lane.

A week before, a dreadful defeat to Derby seemed to have condemned City to relegation. Gordon Strachan’s side lost 2-1 and relegation rivals Sunderland, Southampton and West Ham had all won. The Sky Blues would have to win on the final day and rely on defeat for Sunderland and Middlesbrough not getting a result at the same time to stay up. The odds were stacked against them.

The tension of the occasion and the day was immense and unrelenting.

Kick-off was scheduled for 4pm, with coverage of all the action around the grounds across Sky Sports. In an echo of the past, traffic problems led to a delayed kick-off for a Coventry City game – the M1 and M25 were clogged with Sky Blues supporters making their way to North London, and the start of the fixture was put back by 15 minutes.

Despite impressive performances in recent weeks Strachan was on the bench, opting for an attacking line up that included Darren Huckerby, Dion Dublin, Peter Ndlovu and Noel Whelan – the intent was clear – plus a recall for the experience of Kevin Richardson.

While nerves and tension flowed through the 4,500 City fans at White Hart Lane, the Sky Blues team seemed up for the occasion and nerveless. Tackles flew in thick and fast, with David Burrows booked after only two minutes and Noel Whelan fortunate not to get early marching orders too.

City took the lead with 13 minutes on the clock. After a short corner, the ball was returning to Gary McAllister who swung a delightful cross into the Spurs box. Dublin leaped highest on the edge of the six-yard box to head past Espen Baardsen in the Tottenham goal. 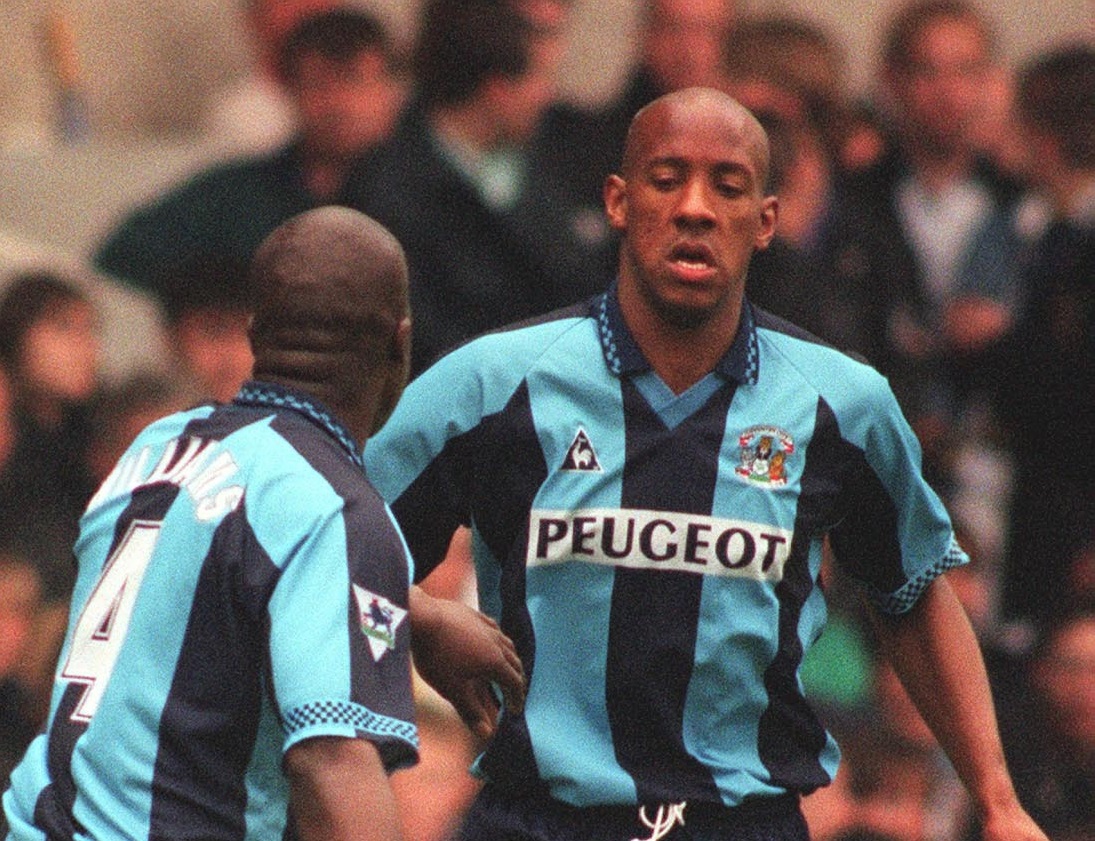 After Steve Ogrizovic had to make a smart save from Ruel Fox, the Sky Blues doubled their lead. McAllister’s corner, this time a deep one from the right, reached the swinging boot of Paul Williams around the penalty spot and the ball flew into the net.

However, with 39 minutes gone Spurs pulled one back. Teddy Sheringham’s free-kick came back off the crossbar and fell kindly for Paul McVeigh to prod home. McVeigh almost brought things level before half-time, but Ogrizovic was brave to dive at the striker’s feet and bring his mazy run to an end.

The second-half was unbelievably tense – just one goal for Tottenham would see City relegated.

Ogrizovic made a terrific diving save from a Jason Dozzell header, and City fans were still in a world of nerves.

Before the days of smart phones and apps, the radio was king on days like this and thankfully the news it was bringing was good news, with the traffic delays meaning the full time scores elsewhere were know before the final whistle at White Hart Lane.

Middlesbrough and their continental stars such as Juninho and Ravanelli could only draw at Leeds – they were down. After a seemingly endless wait, Sunderland’s defeat at Wimbledon was confirmed.

City just had to hold on to their lead. 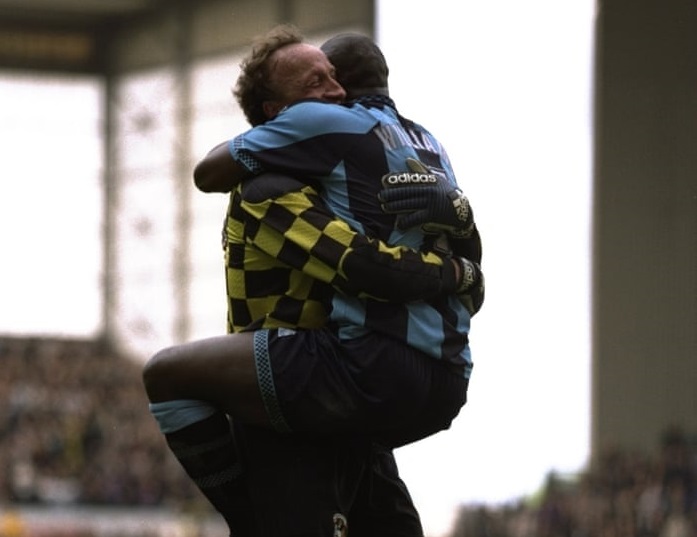 Ogrizovic pulled off a point-blank stop from Neil Fenn’s low shot – from the resulting corner, another Dozzell header was saved by Oggy. The pressure from Tottenham was immense, and City seemed camped in their own half as pressure told.

Then the final whistle blew, and survival was confirmed. Tears of joy and relief flowed, and City’s ‘Great Escape’ was complete sparking jubilant scenes.

Ogrizovic was named man of the match, and years later the Sky Blues legend shared his memories of the day:

"Take the FA Cup final out and that was the best day I had in football. People had written us off and we had to rely on a number of other results.

"We started 20 minutes later than everyone else, so the results had filtered through and the last 15 minutes were precarious."

"It was one of those days when the Coventry fans were unbelievable, it felt like a home game.”

Speaking after the game, Strachan said: “They said ‘we have won nothing’ but they have won something. They have won their pride back. They can look people in the eye again.” 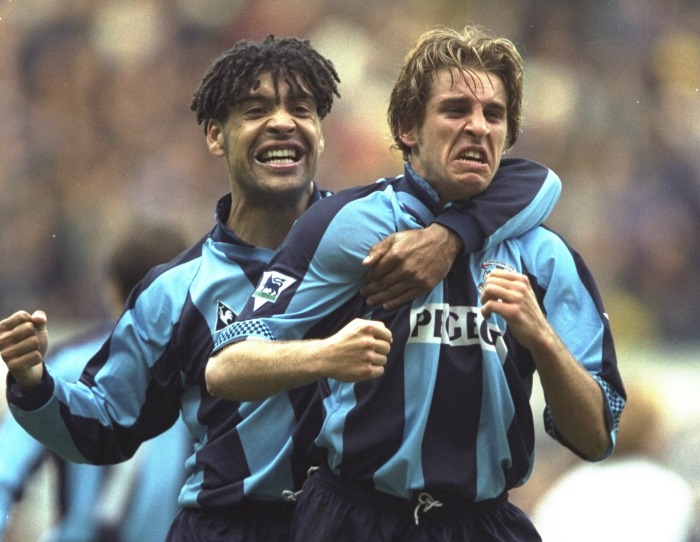