While ideally you’d never leave it that late, those occasions bring their own enjoyment (eventually) and memories as City’s players demonstrated the courage and determination to get the required result. In this series, we’ll be looking at some of those escapes from relegation – heading back now to this day in 1984…

The introduction of three points for a win moved the safety mark in Division One up, from between 35 to 40 points to 50 points – what the Sky Blues ended up with in 1983/84 thanks to a final day victory over Norwich.

It had been a tumultuous period for the Club. Bobby Gould had been appointed Manager at the start of the campaign, coming in as Jimmy Hill left. Hill had prompted protests from fans over the move to an all-seater set-up at Highfield Road, and an exodus of players who had been part of the 1980/81 squad that nearly reached the League Cup Final.

Gould’s extensive knowledge of lower league football and ability to spot a player with potential saw some bargain additions to the Sky Blues squad at the start of the 83/84 season, such as Dave Bennett, Terry Gibson, Trevor Peake, Micky Gynn, Micky Adams and Stuart Pearce.

With squad assembled at a cut price, the bookies had City down as favourites for the drop. However, with immense work rate and spirit, plus unlikely victories, by December the Sky Blues were fourth in the topflight.

A home win against Sunderland on 2nd January bode well for 1984 – but Coventry only collected two wins from the next 19 games, meaning the Norwich game on the final day became a must win one.

Mick Ferguson, a City star of the 70s, had re-joined on loan from Birmingham City who despite the close proximity of the two sides in the table, had no issue in Ferguson making a temporary return to Highfield Road - and no clause in the loan agreement. 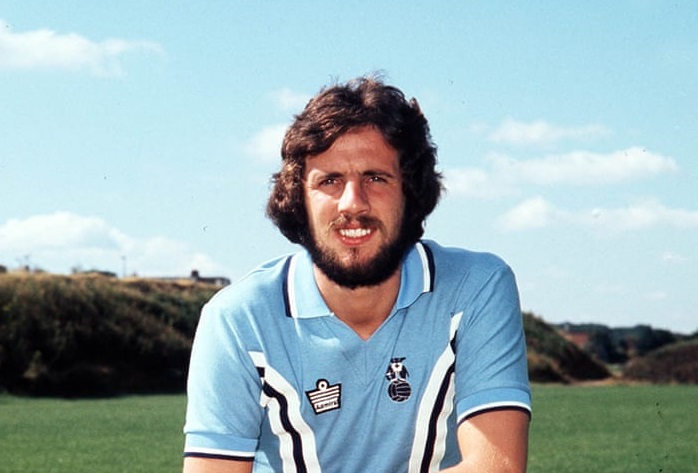 Ferguson had fallen out of favour at St Andrew's and was keen for a Sky Blues return. By the time Ferguson was fit there were only seven games to go, and Coventry did not so much need a striker as a miracle. Having been 10th in early January they had taken three of a possible 39 points from their next 13 league games, winning none, and plummeted down the table. But Ferguson scored the winner against Wolves on his second debut, and the first against Nottingham Forest in the next game, both won 2-1.

At kick-off City were level on points with Birmingham City and Stoke City, with the Blues having the superior goal difference.

Mid-table Norwich took the lead in the 35th minute with a penalty, but City equalised just two minutes later with striker Ferguson scoring the goal.

With 20 minutes to go the Sky Blues went ahead, Dave Bennett scoring directly from a corner.

In the dying minutes, Norwich striker Robert Rosario was presented with an easy chance to score and consign Bobby Gould’s side to the drop. Silence fell upon Highfield Road as Rosario’s header hit the inside of the post and into the arms of Perry Suckling in the Sky Blues goal.

At St Andrew’s, Birmingham City were denied victory over Southampton by the width of a post. Ferguson’s goal had helped keep the Sky Blues up at the expense of his parent club.