While ideally you’d never leave it that late, those occasions bring their own enjoyment (eventually) and memories as City’s players demonstrated the courage and determination to get the required result.

In this series, we’ll be looking at some of those escapes from relegation – this time we go back to on this day in 1977…

This relegation battle ended in bizarre circumstances as the Sky Blues stayed up by the skin of their teeth.

A run of four games without a win meant City went into the game needing a result to guarantee safety, while Bristol City were happy to take a draw to stay up.

The alternative for the Sky Blues was to rely on results elsewhere, with the other team in the mix Sunderland playing Everton at Goodison Park. Sunderland only needed a draw, while Spurs and Stoke were already down.

Kick-off at Highfield Road was delayed as traffic problems had delayed large numbers of Bristol fans, meaning City were 15 minutes behind the action elsewhere. In Hill’s autobiography, Jimmy says the decision to delay was one made by the referee.

The Sky Blues went into a two goal lead, with Tommy Hutchison netting in the 15th and 51st minute – only his second and third goals of the season.

His first came as John Shaw could only parry a cross to Hutch to tap in, while his second saw him follow up a Barry Powell effort that hit the post to double the Sky Blues lead.

However things are not that simple when you follow Coventry City and Bristol responded, bringing the scores level with eleven minutes of play left.

At that stage a goal for either side would have meant relegation for the other team. Having been clearly ahead, the now level Sky Blues looked desperate and resorted to booting the ball upfield in panic.

Word spread in the stadium of the 2-0 loss for Sunderland – firstly in the directors box, then the crowd and finally on the pitch. The score was confirmed on the scoreboard at Highfield Road. With the current score meaning both sides would be safe, the two teams played out the final few minutes and settled for a draw.

Both teams passed the ball around amongst themselves as the clock ran down, and there were jubilant scenes all round amongst players and fans as the final whistle blew, while Managers Gordon Milne and Alan Dicks shared champagne drunk from tea cups. 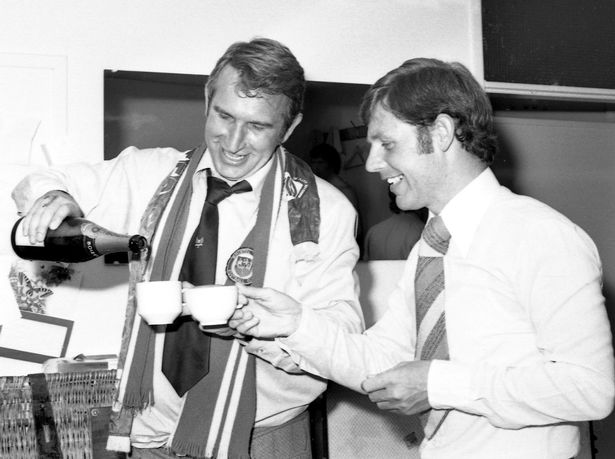 While some controversy may remain to this day for some on the wrong side of the result, it is certainly a memorable and a very close relegation call for the Sky Blues, when both City's did what was required of them to keep their place in their First Division.

At a hearing of the Football League at the time the Club were exonerated of all wrongdoing and the top flight stay continued.