Having turned the Supremo spotlight onto John Sillett previously, we now look at another man who contributed hugely to the Sky Blues triumph in the 1987 final - George Curtis.

The Ironman was a legendary figure at Highfield Road long before the cup came to Coventry. He had set the club’s appearance record as a physically powerful centre half and natural leader whose captaincy and consistency were second to none.

Consequently, when Don Mackay parted company with the club in April 1986 it was Curtis that the board turned to, alongside Sillett. Having become commercial manager in July 1974, Curtis had taken over as Managing Director in September 1983 when his old team-mate Bobby Gould was manager. Evidently the board didn’t have to look far to find someone who knew the club inside out and could steer the side through the remaining three fixtures of the season.

A goal from Nick Pickering gave the duo a 1-0 home win over Luton in his first match. It was a result that brought an eight game winless run to an end and helped exorcise the horrors of a 5-0 defeat the week before. Although a 1-0 defeat at West Ham caused some anxiety going into the final fixture of the season, goals from Brian Kilcline and Dave Bennett brought about a final day win over QPR.

Two wins from George and John’s three games took City to 43 points and the safety of being sixth from bottom, two points clear of Ipswich who occupied the last of the relegation places just five years after winning a European trophy.

If there was cause for celebration in the Curtis household where two days later George turned 47, that was nothing compared to the scenes a year later as Coventry won the cup. Working in tandem with John Sillett who duly took over team affairs with Curtis moving back ‘upstairs’ into a more administrative role, the pair both deserve credit for Coventry’s success. 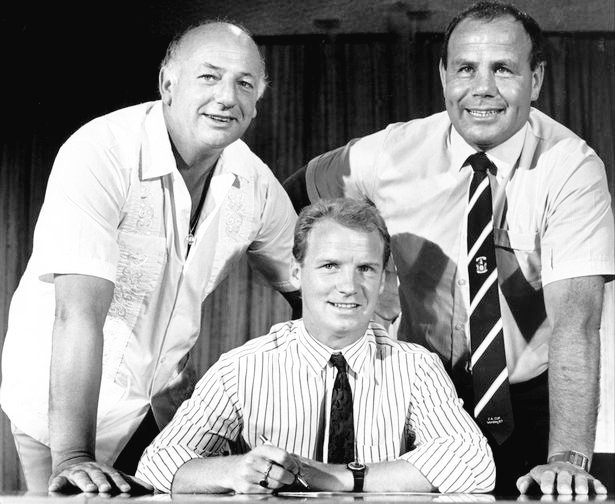 During George’s famed 1986-87 season in charge with Sillett, City didn’t just win the cup but climbed to 10th in the top flight, far from the lowly position the team occupied when The Ironman was called upon. Curtis didn’t have a lot to spend but in July 1986 invested £60,000 in what proved to be an inspired purchase in bringing in Keith Houchen from Scunthorpe United.

Houchen was the kind of centre forward Curtis knew could cause trouble. As a centre half George had been renowned as a hard man in an age where physical contact wasn’t just accepted, it was expected. Curtis the centre half was used to having physically fragile centre forwards in his pocket but Houchen was the sort who would let centre halves know they had been in a game. However, he was yet to pull up any trees in his career so Curtis deserves credit for seeing enough in him to produce the cheque-book.

Houchen had only scored twice in nine league games for Scunthorpe having previously played for York, Leyton Orient and Hartlepool. During the cup winning season Houchen would only score twice in 20 games but in the FA Cup he was a revelation. Five goals in as many games included two in the quarter-final, one in the semi and the iconic moment of the final, where his diving header was one of the all-time most memorable cup final moments.

The Wembley win over Tottenham was the climax of a season under Curtis’ control. It commenced with defeat at the same ground and by the same score-line as his one previous away game in charge, losing at West Ham by a single goal. Nick Pickering had scored the winner in George and John’s first match and the England international came up trumps again with the winner in the opening home game of the season as Arsenal were beaten, before following it up with another goal to earn a point against Everton. 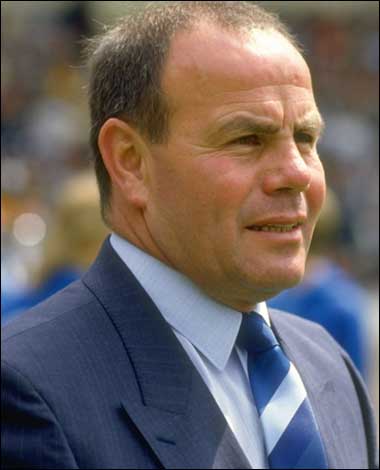 Firm foundations were being laid and by the end of September a seven game unbeaten run had seen only one goal conceded in the last five of those. By then a cup run was under way – but in the League Cup. Mighty Liverpool – who had done ‘the double’ the previous season – were taken to a replay with a quarter-final place at stake as City hinted at what was to come. At the start of the month where it was Coventry’s turn to win at Wembley Liverpool were beaten at Highfield Road, that man Pickering again notching the winner.

It was Coventry’s 25th win of the season in all competitions but the best victory of the season was still to come. The cup run had started with a comfortable 3-0 win over Bolton and away wins at Manchester United, Stoke and Sheffield Wednesday. Having hit the winner at Old Trafford, Houchen helped himself to a brace against Wednesday and was back at Hillsborough again for a semi-final showdown with Leeds, where he scored again as Coventry won in extra-time. 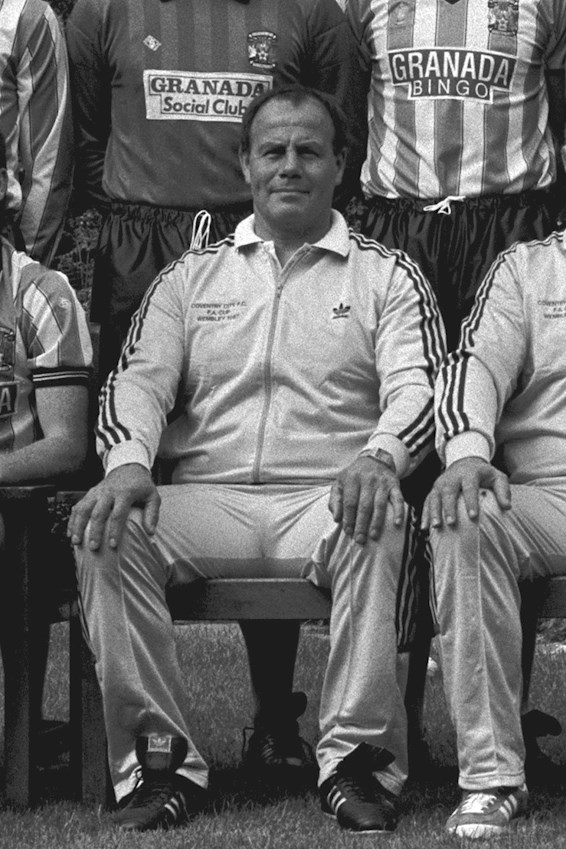 Working in tandem with John Sillett, George Curtis was a man everyone in and around Coventry looked up to, and in guiding the club to FA Cup triumph he brought about the finest day in the history of the club that by that glorious day of May 16 1987 was already well into its second century.

Up to that point, throughout that long history no one had played for games for the club than George. While his phenomenal total of 538 appearances has since been surpassed by Steve Ogrizovic, Curtis remains the record outfield appearance maker and indeed the only non-goalkeeper to play over 500 times.

Former Coventry player Harry Barratt had recommended City sign Curtis from Snowdown Colliery who Barratt managed, and so in October 1955 George was brought to the club as a 16-year old during the brief reign of Jesse Carver. 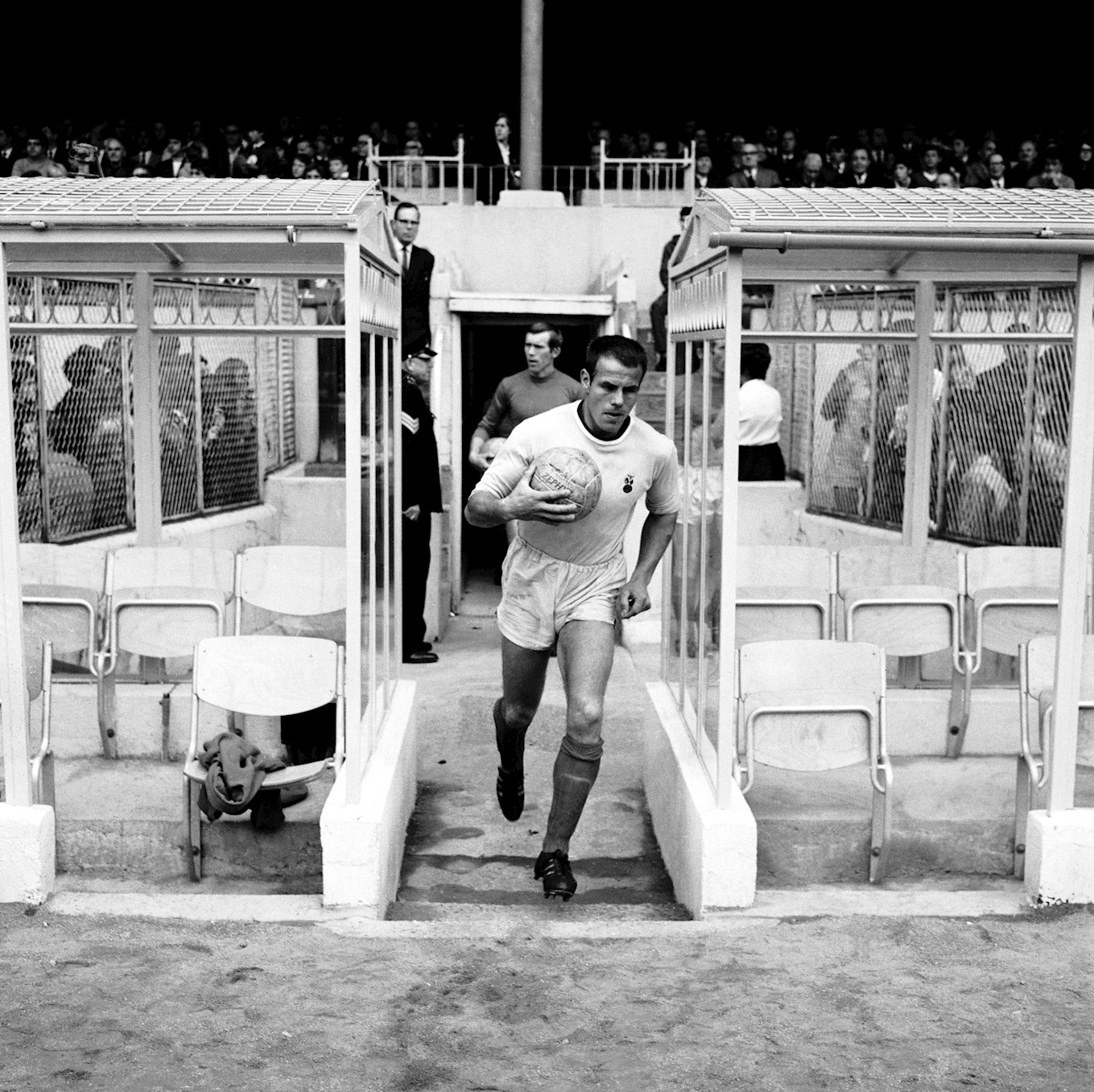 By the time he was 17 George had played in three league games, with three different goalkeepers.  As was so often the case in the time before Play-offs late season games often had little at stake other than testing out young players to see if they had what it takes. Thus Curtis was given the final three games of the season by George Raynor who had succeeded Carver. It wasn’t the greatest of debuts as four goals were leaked in defeat at Newport but there would be a first clean sheet on his home debut on the final day of the campaign.

George had made the right impression and got 19 games the following year, many of them at left back but while he played four fewer league games the season after by now he was earning a place in his best position at the heart of the defence, where he started the final dozen games of the season.

The next nine seasons saw him play an incredible 440 games, an average of over 48 a season, Most of these were before the dawn of substitutes so were full 90 minute appearances. Strange when you think of coaches making wholesale changes to modern day teams because of fatigue.

By the time England won the World Cup in 1966 George Curtis had missed just two Coventry games during the decade – and he would be ever present in the following season too!

During this period Coventry climbed from the third division to the top flight for the first time, the club reaching the highest level in 1967, exactly 20 years before the cup came to Highfield Road.

Having done so much to get Coventry into the top flight Curtis made his own first division bow at Burnley but before he could lead the side out at home he was missing. With huge misfortune and awfully bad timing a broken leg in the second game of the season at Nottingham Forest meant that Jimmy Hill’s side would face the top talent in the country minus their totemic defender. 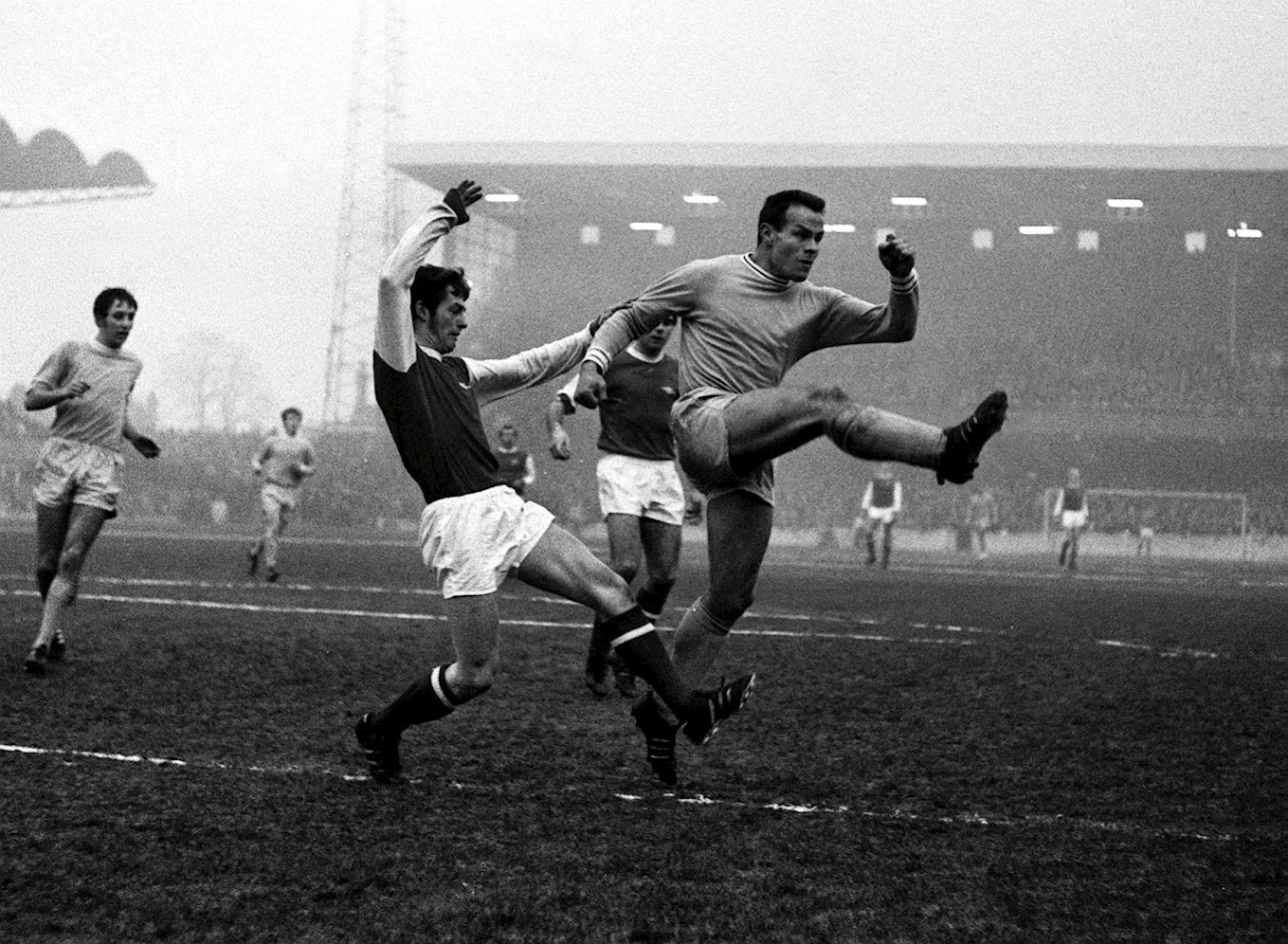 By the time George came back at Easter Noel Cantwell was in charge. Coming off the bench in a home win over Stoke, Curtis was asked to start in the return match just 24 hours later only to have to come off injured.

It would be the following October before he could play regularly again. However, he had recovered sufficiently to show he could hold down a regular spot at the highest level despite approaching the veteran stage, one highlight being a goal in a home win over Manchester United who had become the first English European champions, and at the time had reached the semi-finals in the defence of their trophy.

It would be Manchester United’s next visit that marked the final start of Curtis’ Coventry career.  A week later, in November 1969, George came off the bench for his final City appearance in a goalless draw at Burnley. 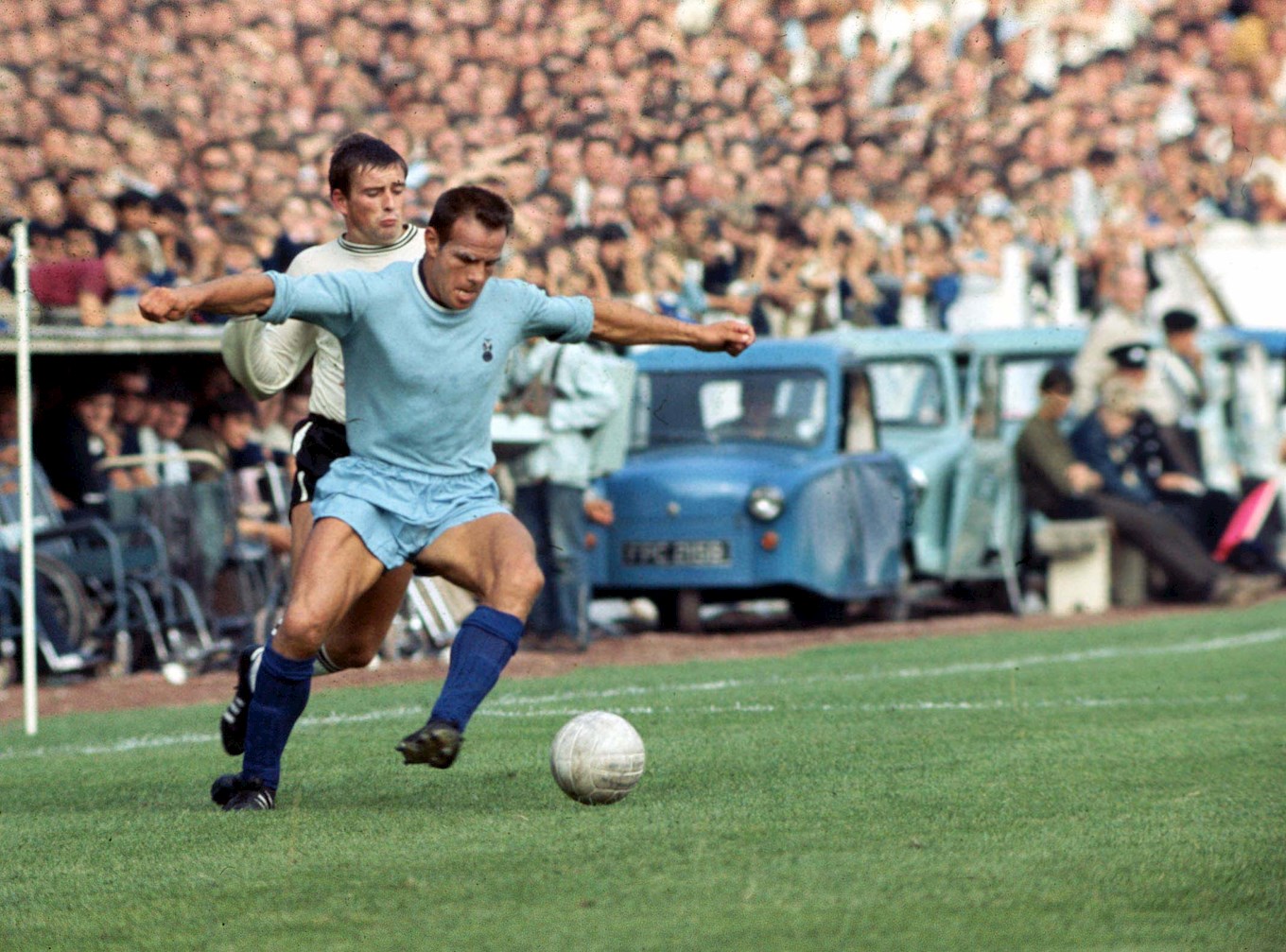 The following month the man who had been a central figure in a decade of massive improvement for the club moved on. A measure of how swinging the sixties had been was that Coventry had climbed from division three to being destined for sixth place in the top flight at the end of Curtis’ final season. City were now in a higher division than Aston Villa which was where Curtis would add a final chapter to his playing career.

Division two champions in 1960, Villa had won the League Cup in the first year of its existence a year later and been finalists again two years on from that before dropping out of the top flight in 1967, just as second division champions City took their place.

Signing for Tommy Docherty, after just 13 goals in all his years at Highfield Road, Curtis announced his arrival with a debut goal that earned a Boxing Day point away to this afternoon’s visitors Swindon. George would score twice more before the end of the season but by the time of his next goal ‘The Doc’ had departed with Vic Crowe taking over but unable to prevent Villa going down to the third division.

Injury restricted Curtis to 11 games in his first full season at Villa Park but in his second he helped the Villans to the third division title, the final appearance of a long career coming in a 1-1 draw at Mansfield on 24 April 1972. Over half of George’s life at this point had been spent as a first team player. 16 years and 11 months old when making his bow in Coventry colours, 17 years and three days had elapsed between that debut at Newport and him walking off the pitch for the final time.

While his managerial career would be brief, to say it was successful would be an understatement and so George Curtis’ time as City Supremo should be looked on as fondly as his time as a true legend on the pitch. 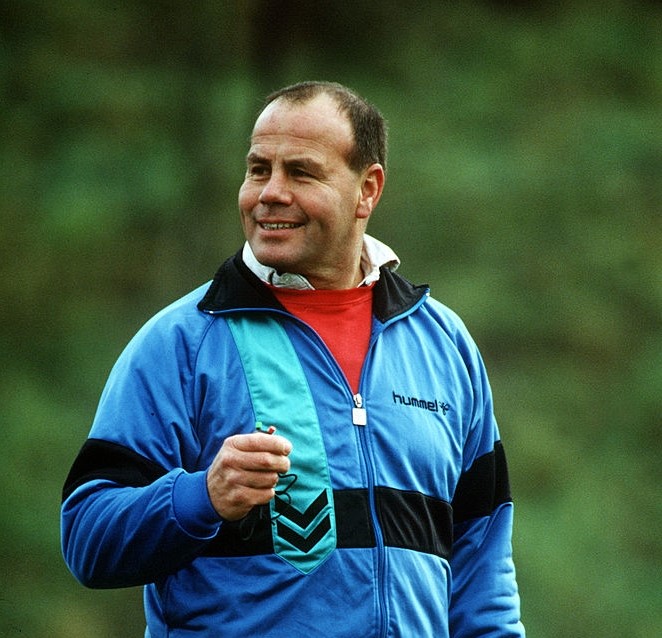