In a feature first published in PUSB, writer Rob Mason investigates international players who represented their country while on Coventry’s books.

Players have played international football for 28 different countries while on the books of Coventry City. In this series we will take a look at players who have been capped with Coventry.

To begin with it seems appropriate to start with the first Coventry born player to play for England, goalkeeper Reg Matthews. He began with Coventry, playing over 100 league games before moving to Chelsea in 1956 a year after the Blues had become champions of England for the first time. Matthews again topped a century of league games for his new club before a return to the midlands with Derby County where he finished his senior career, this time exceeding 200 league appearances before winding down his playing days with Rugby Town where he became player/manager in the late sixties.

Reg won five full caps for England, all of them while with Coventry City. He conceded just five goals in those five games and was unbeaten in an England shirt despite playing in some seriously challenging games including away to reigning World Champions West Germany and the coming World Champions Brazil at Wembley, but it was in front of 132,817 at Hampden Park (main picture) that he was thrown in for his debut against Scotland on 14 April 1956.

A week earlier Reg had been beaten twice at Walsall in a third division game watched by fewer than 15,000. In being selected for the international in Glasgow, Matthews became the first third tier goalkeeper ever to play for England. City though had to do without him, Alf Bentley standing in to debut as Coventry lost 2-1 to Torquay at Highfield Road on the same afternoon Matthews was being capped. 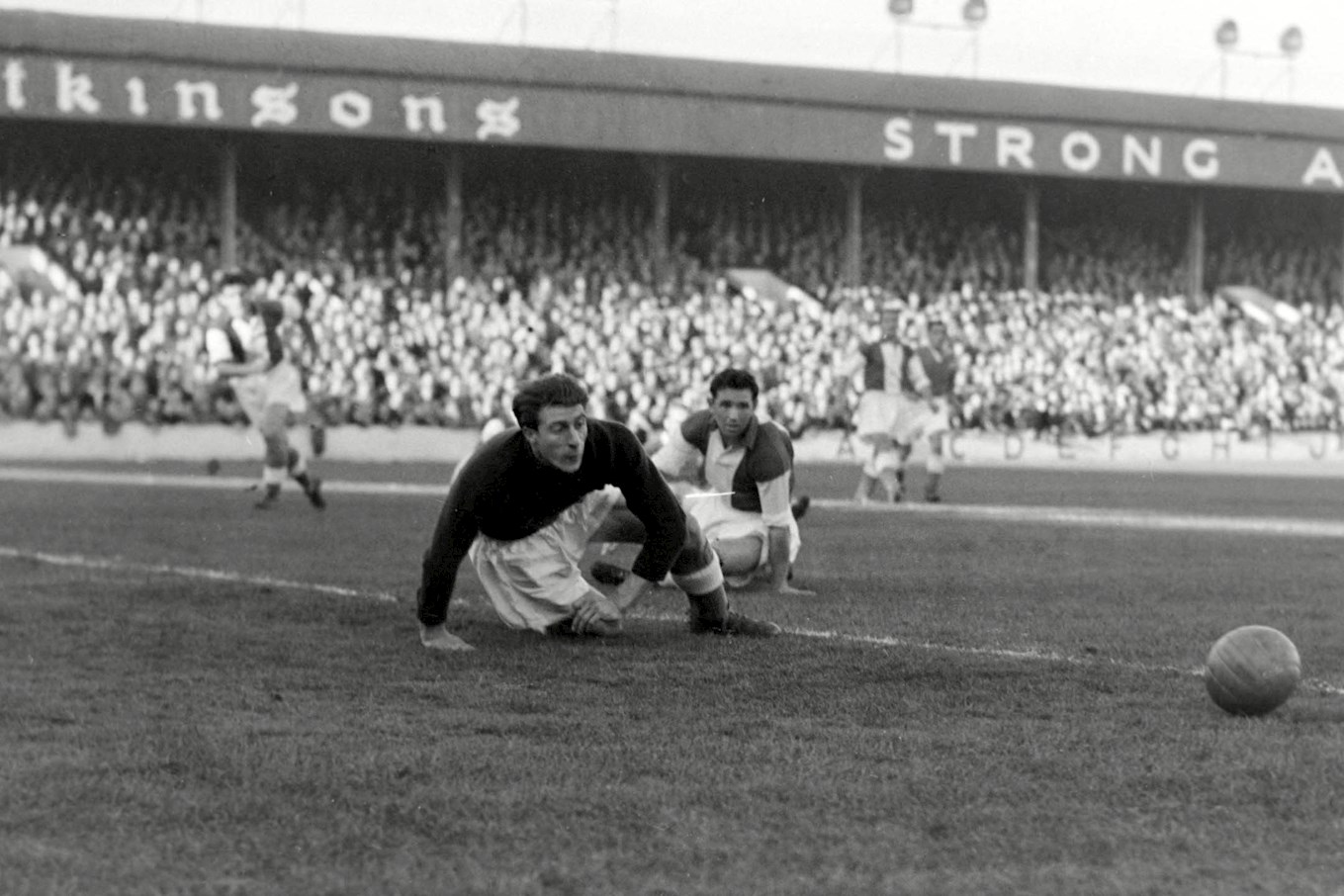 At Hampden, Matthews had some seriously famous teammates although not his namesake Stanley. Captaining England was Wolves Billy Wright, winning the 73rd of his 105 caps. Alongside Wright at left half was teenager Duncan Edwards, playing for England for the fifth time. Sadly, under two years later Edwards would be dead, a victim of the Munich air disaster with Manchester United. Edwards wasn’t the only member of the England team on Matthews’ debut to perish at Munich, inside forward Tommy Taylor was another to die tragically young. Taylor had been born in the same calendar year as Matthews: 1932.

Other star names in the England line-up at Hampden were the Preston plumber Tom Finney, the Lion of Vienna Nat Lofthouse and the only member of the side other than Edwards who was younger than the Coventry custodian, Johnny Haynes, who got England’s 89th minute equaliser in a 1-1 draw.

Scotland’s team included just two ‘Anglos’ - players with English clubs -  full back John Hewie of Charlton and Manchester City’s Bob Johnstone. Matthews had been beaten on the hour mark by a lob from Aberdeen winger Graham Leggat, a player who later partnered Haynes at Fulham.

Coventry’s ‘keeper retained his place for England’s next match the following month, a game that brought Brazil to Wembley. This time he was accompanied by Stanley Matthews who apparently was asked for his autograph in the dressing room before the match by Johnny Haynes! England led 2-0 in under five minutes but Brazil came back with two goals in four minutes themselves shortly before the hour. Matthews was beaten by a deflection by yet another player to be killed in the Munich air disaster, Roger Byrne. He tried to block a volley from Flamengo’s Paulinho only for it to loop up and over Matthews. Three minutes later it was 2-2 when Botafogo’s Didi beat Matthews from outside the box for his first international goal. 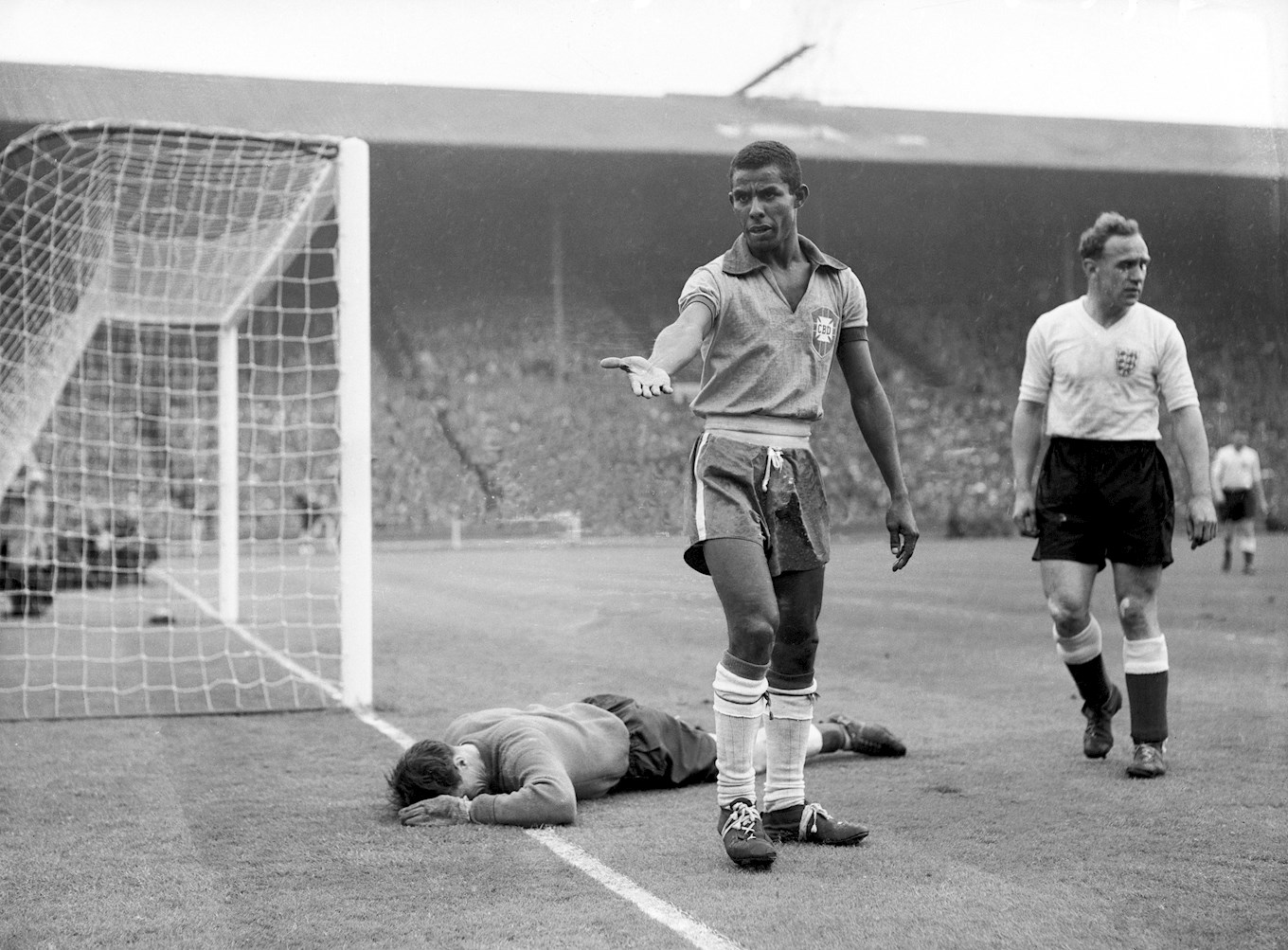 In a game where Matthews’ opposite number Gylmar saved two penalties England nonetheless came back to win 4-2, both Tommy Taylor and debutant Colin Grainger getting their second of the game. Grainger was also a singer and later appeared on the same bill as The Beatles!

Regardless of being a player from the third division Reg retained his place for England’s next game a week later. This was away to Sweden who were due to host the next World Cup. This was not such a high profile game as Matthews previous outings against Scotland and Brazil but in extremely windy conditions it was another big test and one he passed with flying colours, keeping a clean sheet in a goalless draw and making notable saves from Bengt Lindskog of Malmo, Djurgardens’ Gosta Sandberg and Helsingborg’s Sven-Ove Svensson.

Four days later Reg was ruled out of a 5-1 win over Finland in Helsinki but having recovered from his knock he was brought straight back into the side a week later ahead of Manchester United’s Ray Wood. Matthews’ fourth cap was in front of 92,000 in Berlin as England demolished the World Champions West Germany 3-1, with approaching half the crowd reportedly being British servicemen. The German goal was a consolation five minutes from time when Kaiserlautern’s Fritz Walter beat Coventry’s finest. By then England had the game safe, Edwards, Grainger and Haynes all being on the mark. Edwards opener saw him ride three tackles before powering home from the edge of the box. What a loss he was.

England didn’t play again until October when once again Matthews was selected for what would be a 1-1 draw with Northern Ireland in Belfast. While City were losing 3-1 at Torquay without him Reg was beaten by Burnley’s Jimmy McIlroy after palming out a long throw from Villa’s Peter McParland as the Irish engineered an early equaliser after Stan Matthews had put England ahead. Regardless of being well into his 42nd year, a goal that made Stan Matthews England’s oldest scorer.

It would be the last goal Stan Matthews ever scored for England but it was also the last time Reg Matthews played for his country. There would also be only five more games for Coventry, the last a 1-1 draw at home to Brentford a month after what proved to be his international farewell.

Chelsea paid a record fee for a goalkeeper - £22,500 – for the signature of a player who needed to progress into the top flight to enhance his international claims. However Reg never won another England cap. He was unfortunate not to go to the 1958 World Cup, especially given his performance for the national side in Stockholm. Burnley’s Colin McDonald and Bolton’s Eddie Hopkinson became the preferred ‘keepers with Sheffield United’s Alan Hodgkinson third choice. 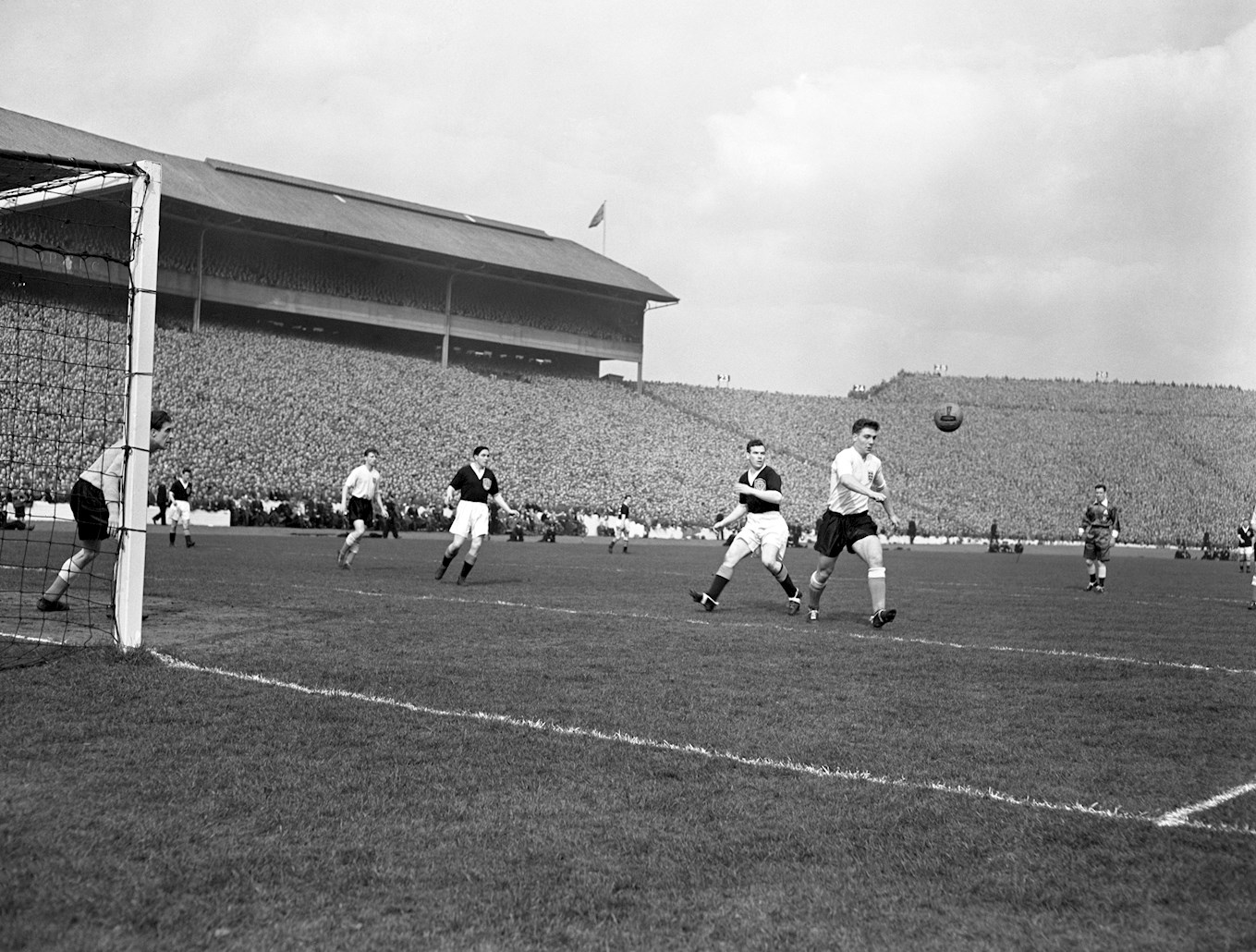 For Matthews there was over a decade of top flight football to come but his England days were entirely with Coventry as a third division player. He also made four Under 23 appearances for England while with Coventry. The first of these came in a 5-1 win over Italy at Stamford Bridge in January 1955, another occasion when he was a team mate of Duncan Edwards.

Edwards hit a hat-trick as Matthews kept a clean sheet when England won 6-0 away to Scotland in Reg’s second Under 23 international. He was then beaten only by a penalty in a draw with West Germany at Hillsborough. There was another penalty goal against Matthews on his next outing when future team mate Stan Matthews would also score and Tommy Lawton get two as England Over 30s showed the Under 23s who was boss in beating them 5-0 at Arsenal.

Thankfully Reg was on the right side of a 5-1 score-line on his fourth and final Under 23 appearance. On that occasion future England manager Bobby Robson was one of the scorers as England beat Denmark at Portsmouth, Reg being beaten by a 25-yard free kick from Flemming Nielsen. Captain of England that night was Peter Sillett, brother of John who made such a contribution to Coventry – as did Reg Matthews, Coventry’s first England international. 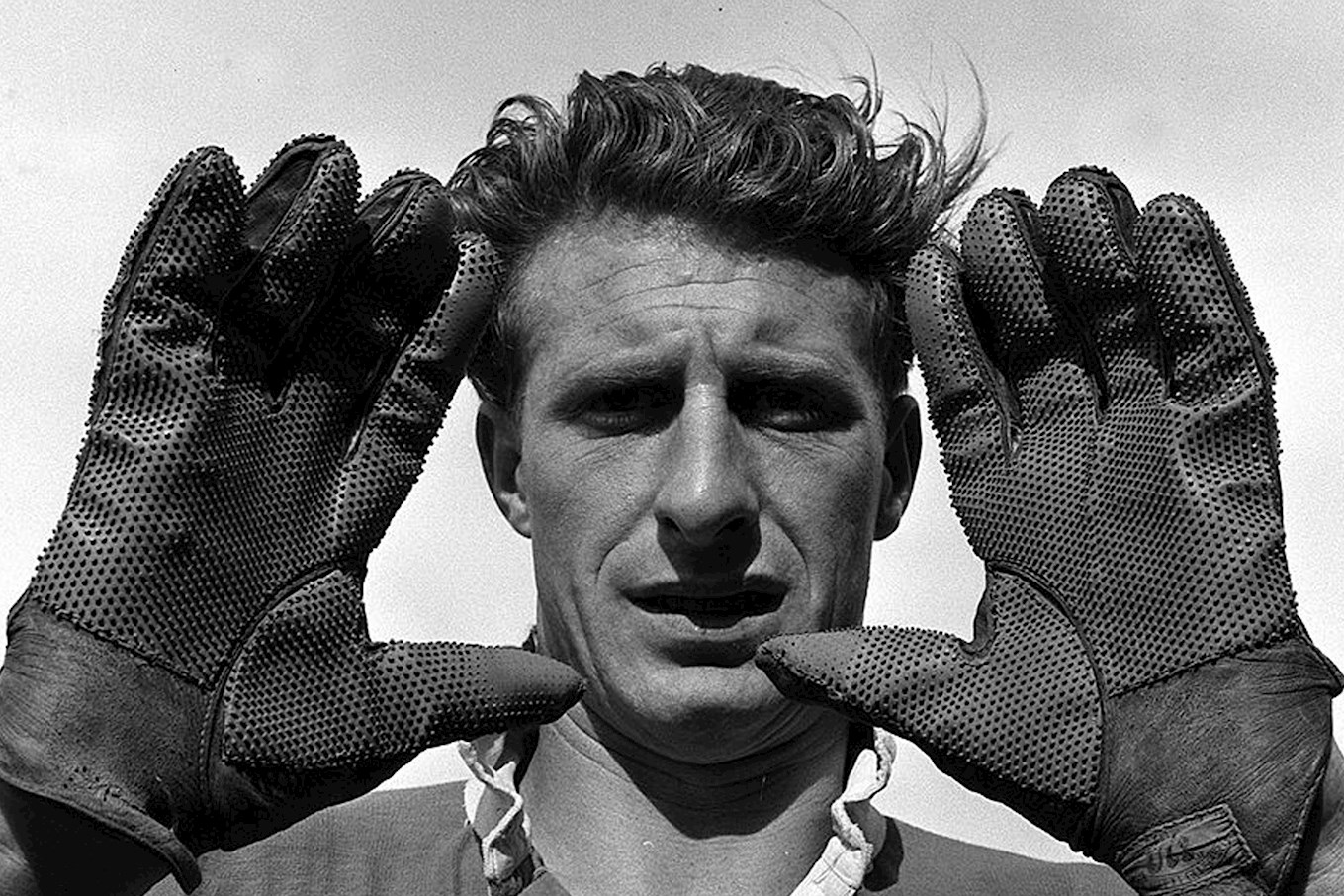