Coventry City fans have joined together to help a supporter in Uganda – and you can help too!

Ronald is head of the CEFOVID charity in Uganda – CEFOVID standing for Community Empowerment For Village Development. It aims to provide the most vulnerable members in the community with health care, life skills training and basic education for underprivileged children.

Last week he was on social media celebrating the Sky Blues’ promotion and singing the Sky Blue Song from the village of Kampala. Now fans have set up a GoFund me page – you can donate here. 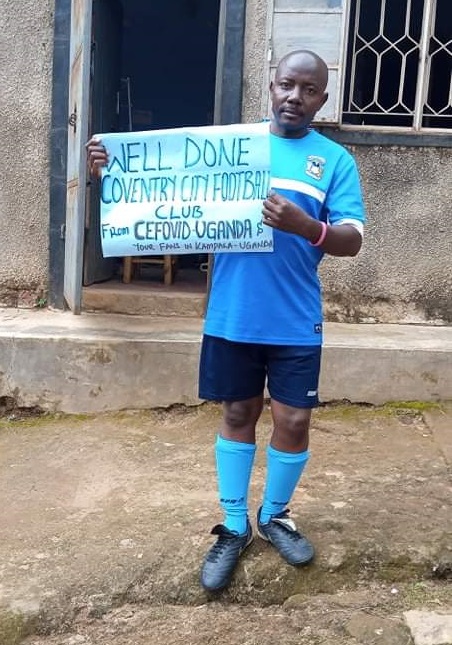 The Coventry Music Museum and 2-Tone Village got involved with CEFOVID six years ago, after a visit to Uganda by a friend of the museum. Since then they have helped fundraise and Kev Monks, an avid lifelong Sky Blues fan who volunteers at the museum and village, has kept Ronald up to date on all City first-team, U23's and U18's matches and the club news.

Ronald has his own football team and now due to wearing City clothing sent to him by people from 2-Tone Village, the City supporters in his village now number over twenty.

And now a GoFundMe has been created by City supporters with the aim to raise money to support Ronald and his charity work.

The page was created by Gavin Williams, of the Northern Sky Blues supporters group, along with fellow supporters CJ Joiner, Kev Monks and Sue Medlock who are leading the fundraising.

If you want to join in the fundraiser for Ronald you can do so by CLICKING HERE . Already over £1700 has been raised!

Williams said: "The fundraiser has been set up by myself, CJ Joiner, Kev Monks and Sue Medlock. It has really been a joint effort, and a fantastic response from Sky Blues fans!

"Our aim is to help his village in any way we can.

"If you can’t make a donation and you are wanting to help the village they would benefit from stationary or any school equipment. Also, sanitary products would help."

Should you wish to send Ronald and CEFOVID an aid parcel or a Coventry City shirt, the address for donations is as follows:

Coventry City Chief Executive Dave Boddy said: “The videos and photos on social media of Ronald and the other fans in Uganda were fantastic to see last week, and I’d like to thank them for their support.

“It’s been great how fans have organised themselves and been galvanised to support the work of Ronald and CEFOVID are doing to improve the lives of some of the most vulnerable members of their community. It goes to show again to us and the wider community how brilliant our supporters are.

“We encourage fans to support this campaign, and we are working with the fans leading the appeal on how we can assist too and support their excellent work so far.”