In a feature first published in PUSB, writer Rob Mason investigates international players who represented their country while on Coventry’s books - this time, it's Gerry Baker!

In modern day football it is not at all unusual to find footballers are born in one country but play for another. Often the qualification comes from a grandparent, let alone a parent. Sometimes a player changes allegiance after playing at junior levels for one country and then accepting full international honours from another. You also have examples of players representing more than one country at senior level. Only in 2018 West Ham’s Declan Rice won the first of three full caps for the Republic of Ireland, but having subsequently decided to play for England.

Coventry City forward Gerry Baker had an English father and a Scottish mother.  Brother Joe played for England having been born in their father’s city of Liverpool but Gerry’s international caps came for the USA as he was born in New Rochelle in New York State in 1938. This came during a short period that his parents spent across the Atlantic after emigrating to America. Three decades later while on the books of the Sky Blues Gerry played for the Stars and Stripes, but in fact the Fabulous Baker Boys both wanted to play for Scotland.

Both of them considered Scotland to be home. Shortly after Gerry was born in New York State the family returned to Liverpool where Joe was born two years later. Having two young sons in Liverpool which like Coventry was subject to World War Two bombing, mother Lizzie took her young family to her home town of Motherwell. Father George was to die from injuries he never recovered from after his merchant navy ship was torpedoed.

It was in Motherwell that Gerry and Joe grew up. They attended Park Primary then St. Joseph’s Secondary School. Gerry’s football career saw him sign for Chelsea when he was 15 after he had come to attention by playing for Lanarkshire Schools, Craigneuk Boys Club and Larkhall Thistle.

Doing well in the Stamford Bridge side’s youth team, Gerry scored four times in six reserve games in 1955-56 and in September 1956 got a game for the first team in the Southern Floodlit Cup against Luton. Still a teenager, the attractions of London were outweighed by homesickness and so Gerry returned to Scotland, signing for Motherwell just a few weeks after his Chelsea debut.

At Chelsea Gerry had played alongside a young Jimmy Greaves. At Motherwell he linked up with Greavsie’s future TV partner Ian St. John. In 1958 Baker moved to St. Mirren where he scored the winner on his debut against Hibs – for whom his brother was playing. In 1959 he scored in the Scottish Cup final as St. Mirren beat Aberdeen in front of 108,000 at Hampden, Celtic having been tamed 4-0 in the semi and Gerry’s old club Motherwell beaten earlier in the cup run.

The following January, Gerry scored 10 goals in one game as holders St. Mirren began the defence of their trophy with a post-war record cup score of 15-0 over Glasgow University. The following season brother Joe scored nine in a Scottish cup-tie as Hibs thrashed Peebles Rovers 15-1! 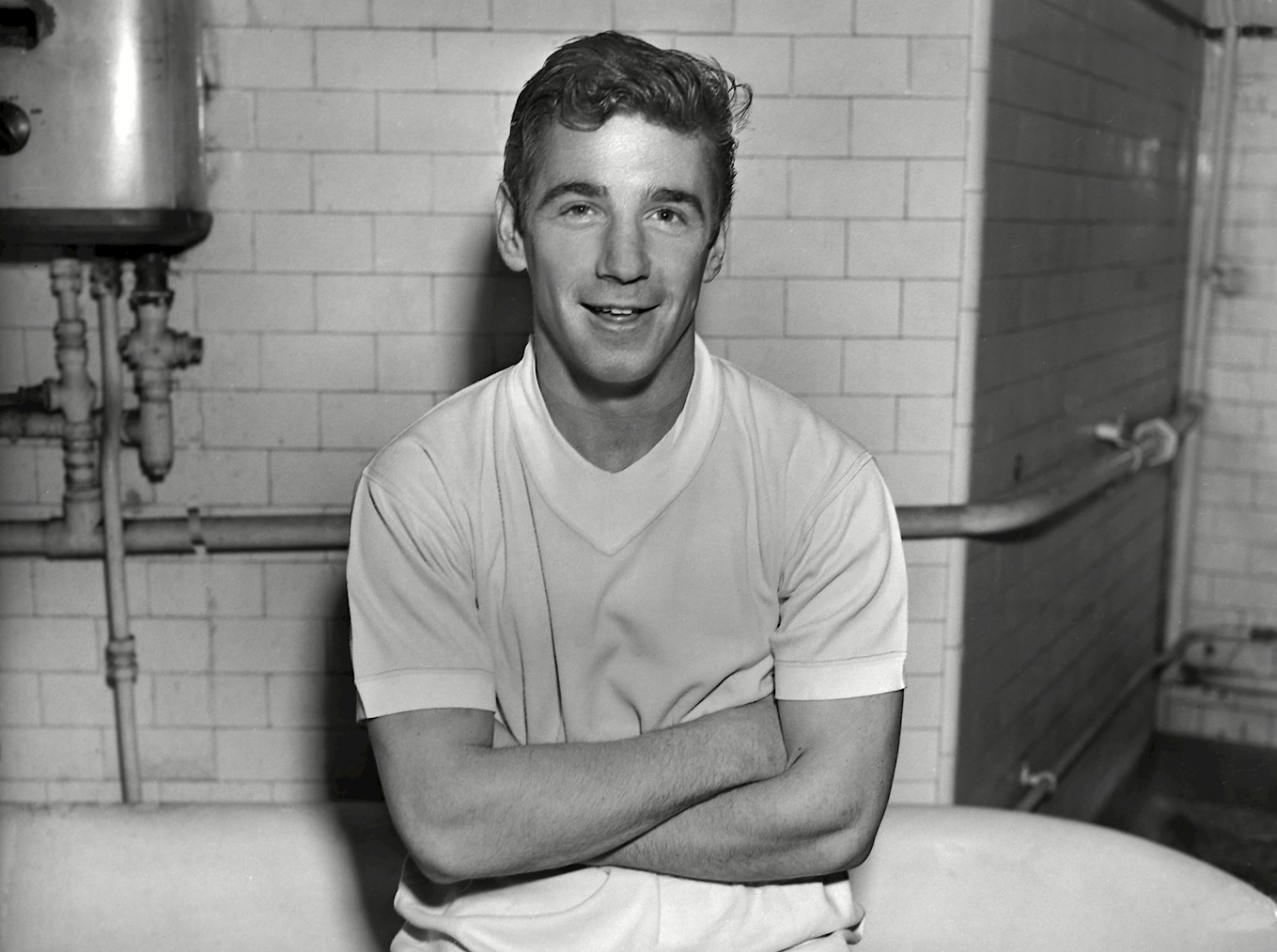 Gerry came south to Manchester City in 1960 after his 65 goals in 81 games for St. Mirren could be ignored no longer. His first goal came 59 years ago this month – at his old club Chelsea. Joining Gerry on the score-sheet in a 6-3 defeat was Denis Law who would soon become a team-mate of Gerry’s brother Joe in Italy where they both joined Torino. Gerry got nine goals in 22 top-flight games in his first season with City and five in 15 the following year before returning to Scotland in November 1961. Still not comfortable in England an £18,000 fee saw Gerry sign for Hibs who evidently felt he would be the ideal replacement for his brother.

Gerry didn’t disappoint. A goal against old club St. Mirren was the first of 43 in 83 games over two years before a third attempt in English football. Again it was for a team in blue but he was yet to come to Coventry, this time signing for Ipswich who like his first club Chelsea had recently been league champions. At Portman Road Gerry signed for Newcastle’s goal-scoring hero of the fifties, Jackie Milburn, with Ipswich enjoying an excellent return on their £25,000 investment as Gerry scored 58 times in 135 games before Coventry came in for him in November 1967. 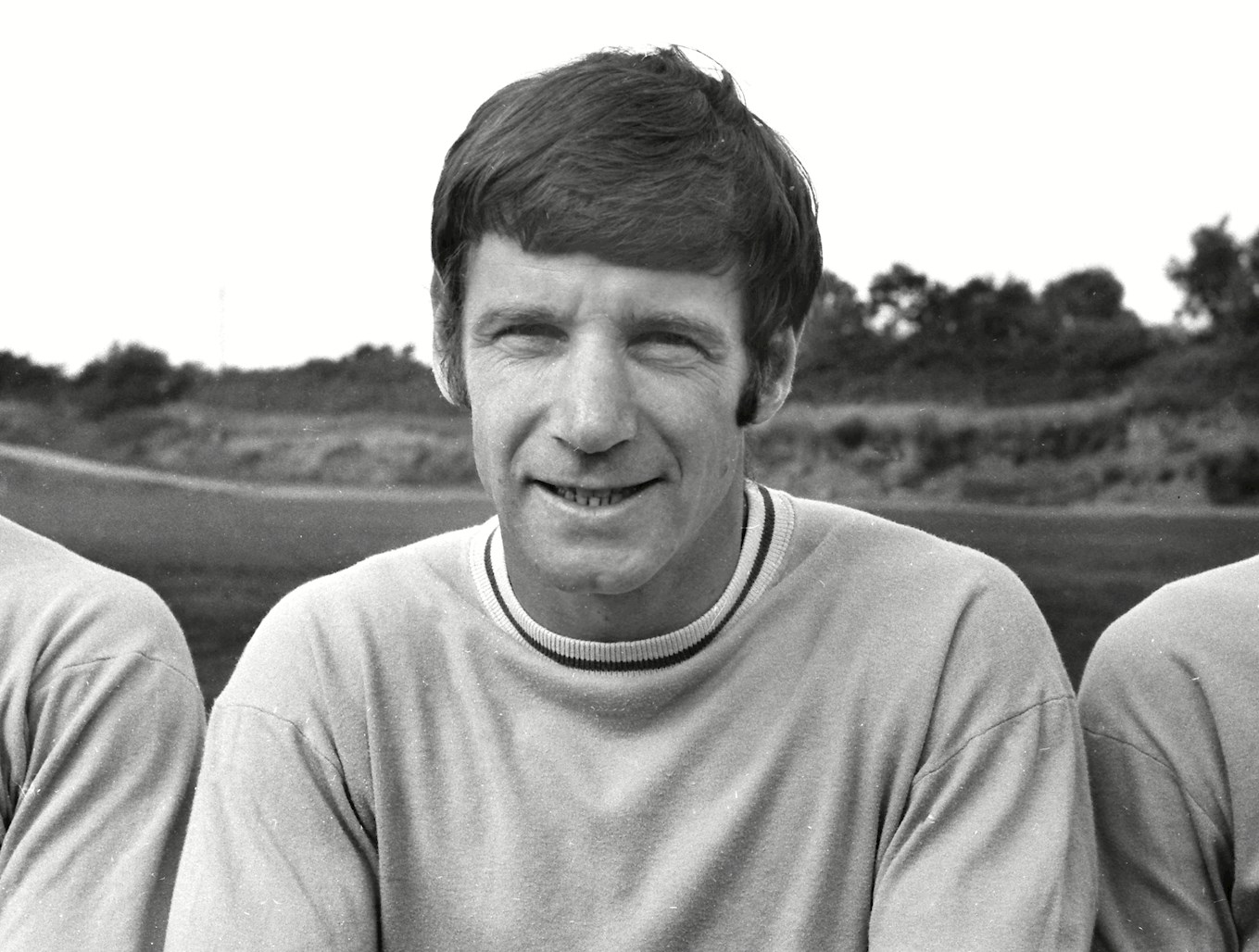 Noel Cantwell paid £20,000 to bring Baker to Highfield Road. Gerry’s first goal came on his fifth appearance, earning a point at home to West Ham. Boxing Day would see him score in another 1-1 draw with Liverpool but there would only be a modest five goals in 22 games as City narrowly escaped relegation.

By the start of the 1968-69 season Gerry was 30 and his international career had not begun but that was about to change. Ironically his best years were behind him, with his time as a prolific scorer beginning to become a memory. Although there had been just one goal in seven early season appearances Gerry was called up by the USA for a World Cup qualifying game with Canada in Toronto on 13 October 1968. Although he didn’t score in a 4-2 defeat Gerry impressed sufficiently to remain part of the States’ squad.

Goals did come Baker’s way on 2 November 1968 as Gerry scored a brace as the US thrashed Bermuda 6-2 in a World Cup qualifying game in Kansas. Despite being born in New York State, and having taken US citizenship when he was 21 at the suggestion of his mother, the fact Gerry felt more British than American was revealed by him absent mindedly turning to face the visitors’ flag when the Bermudan national anthem of ‘God Save the Queen’ struck up. On that day at Highfield Road Coventry were being held to a draw by Southampton but Gerry would make just a handful of further appearances for the Sky Blues. He did play in a late season home win over European champions Manchester United a month before his seventh and final international appearance which came in a 1-0 home defeat to Haiti in San Diego. 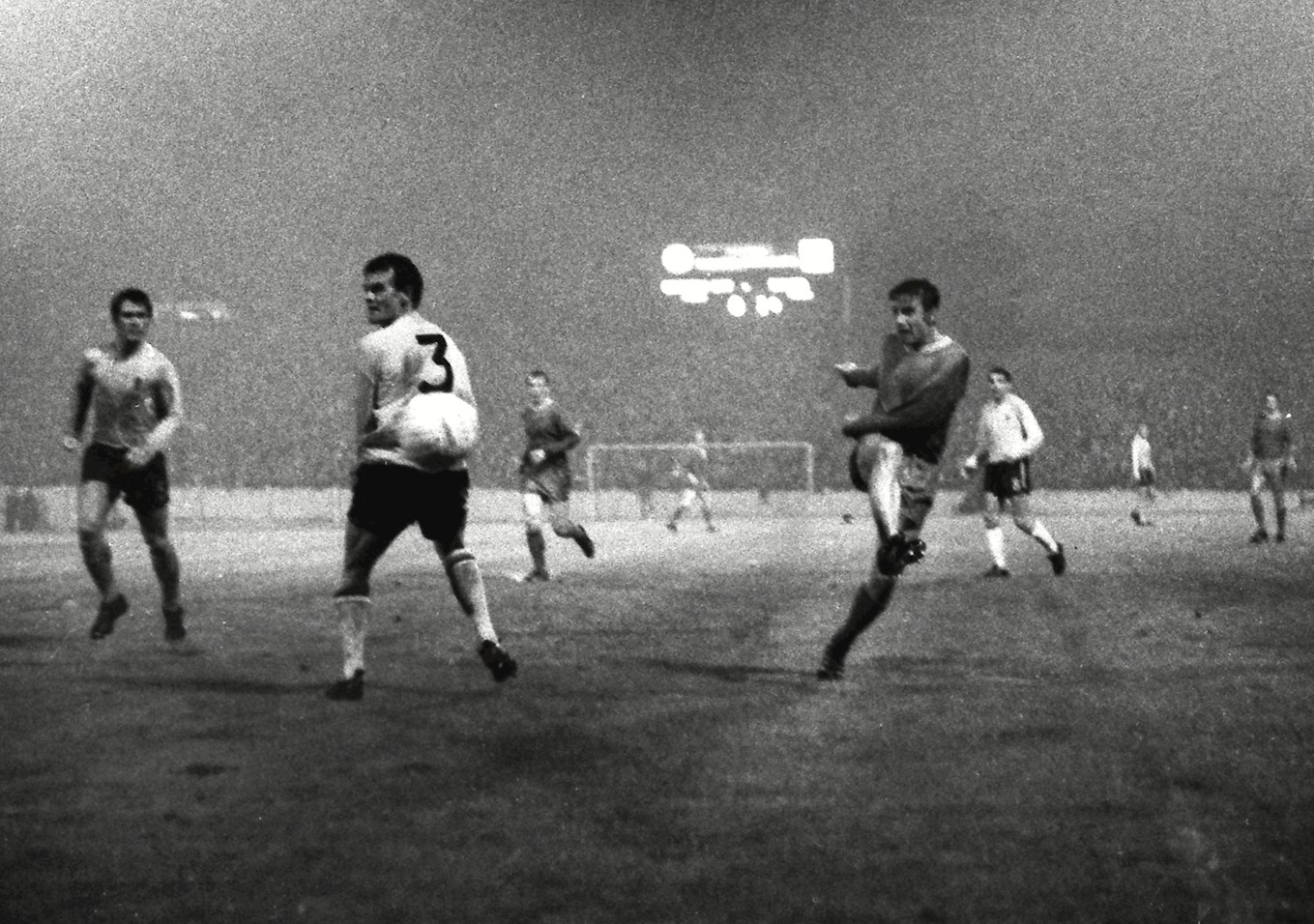 That defeat ended US hopes of qualifying for the 1970 finals in Mexico where England defended their crown. Having beaten the US 3-0 on aggregate in the CONCACAF semi-finals, Haiti lost the final to El Salvador who duly became the whipping boys in the finals.

Baker returned to Coventry the following season but only played once, signing off in a Highfield Road draw with Crystal Palace in September ’69 and being loaned to Brentford the following month. There were eight league appearances and two goals for the Bees before Coventry released Gerry at the end of the season whereupon he was appointed player-manager of Margate – just pipping future Luton manager David Pleat to the post. 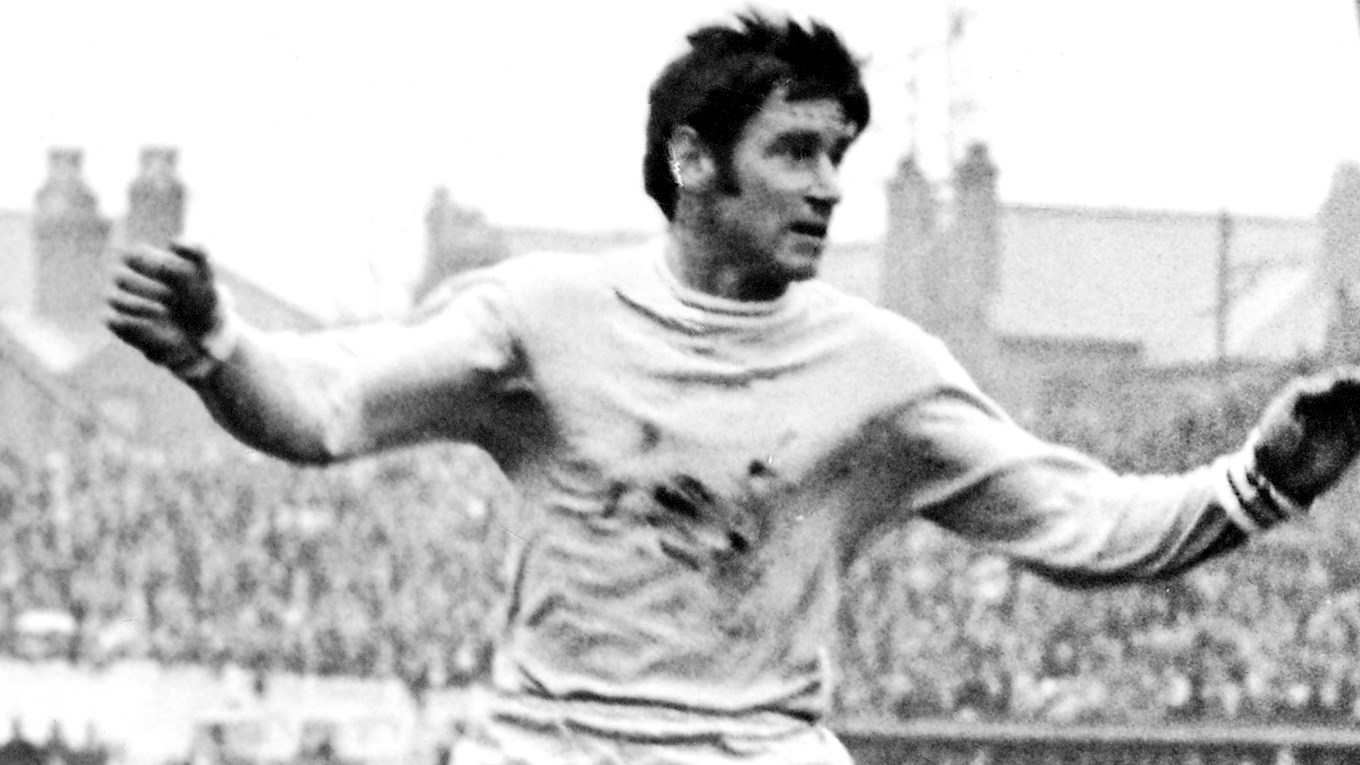 Debuting at Telford on 15 August he got his first goal a week later against Worcester only to dislocate his shoulder next time out at Nuneaton. Quickly recovered he banged in six goals in a month and even made a final FA Cup appearance in the first round against Dagenham as he went on to finish Margate’s joint-top scorer with 11 goals.

Although he started his second season in good form he resigned on 14 September 1971 and signed for Nuneaton solely as a player – playing for David Pleat - and didn’t take long to show he still had the old magic with a hat-trick. As his playing days drew to a close Gerry went on to move to Bedworth during 1972-73 and Worcester, where he retired at the age of 37 after scoring three times during his final campaign in 1974-75.

Gerry returned to Coventry – but as an employee at the Jaguar car factory rather than the football club. His days with football weren’t quite complete though as during 1979-80 he managed Coventry Colliery.

Sporting prowess continued in the Baker family through the daughters of Gerry and his wife Anne who had been a former runner. Their children Karen and Lorraine both became successful athletes representing the Coventry Godiva Harriers. Lorraine finished fifth in the 800m at the 1984 Olympics in her father’s birthplace of America and reached the semi-finals of the same event eight years later in Barcelona. In between she won a bronze medal at the Commonwealth Games in Scotland. Continuing the family tradition two of Gerry’s grandchildren went on to play academy football for Aston Villa.

By then Gerry was retired and living in Holytown in Lanarkshire where he played golf and still fondly remembered his time at Coventry, attending Legends days and in December 2010 being a guest of the club’s Former Players’ Association. He passed away in August 2013, aged 75.