One year ago today, Jordan Henderson captained Liverpool to triumph in the Champions League Final.

In the 2008-09 campaign, Henderson enjoyed an impressive 13 game loan spell at Coventry City from Sunderland.

Ahead of the game against Wolves on 7th February 2009 (a match that City would go on to win 2-1), the then winger Henderson sat down to speak to matchday programme PUSB.

Already you can see the professionalism and desire, plus playing attributes, that has made him a Premier League star and a key component of the England side that reached the World Cup Semi-Finals - read the interview in full below: 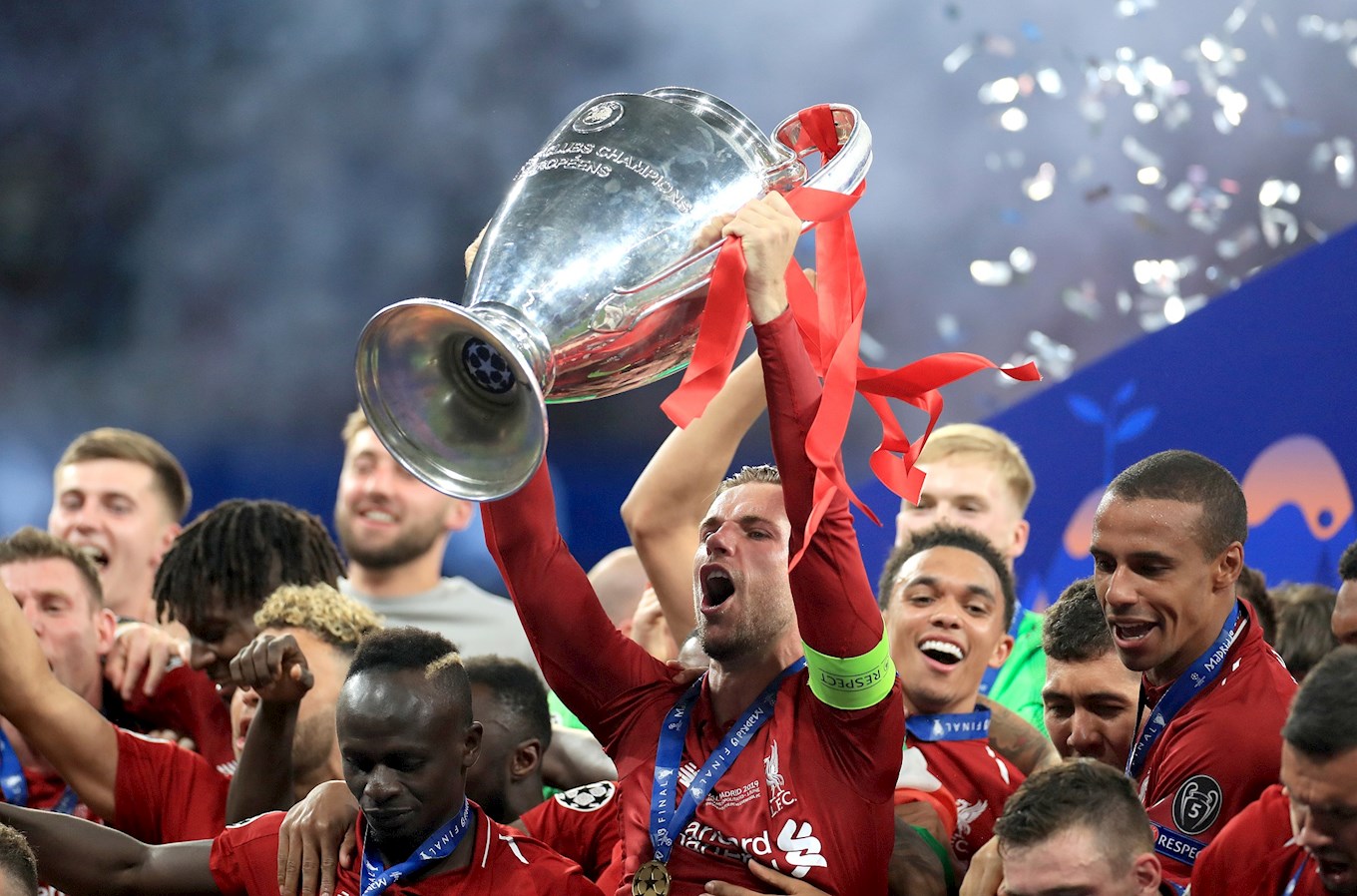 When a young Premier League player arrives on loan at a Championship club, the idea is that it’s mutually beneficial.

The player gets the chance to get a few first team matches under his belt in the gaze of thousands of spectators rather than the dozens that would normally attend a reserve clash.

And the Championship club gets a Premier League prodigy on its books for a short spell that would potentially cost millions to sign on a permanent basis.

It can begin to sound like glorified work experience for an up-and-coming footballer.

But when it comes to winger Jordan Henderson, who joined the Sky Blues for a month from Sunderland ten days ago, he’s hungry for more than just something to put on his CV.

Henderson has been brought up to be a winner and even as an 18-year-old, he’s not prepared to accept second best from himself or his team-mates.

He was, to use a footballing cliché, over the moon to make his Coventry debut in the Championship in the 2-1 defeat at Derby last weekend.

But, several days on, he was still unhappy with the way City had given away the points in an awful first period which saw them chasing their tails in the second.

“I enjoyed it,” said Henderson. “In the first half we were poor and I didn’t really get on the ball that much but in the second half I thought we deserved something from the game.

“It’s not about playing the best football, it’s about getting three points really. We want a top-half finish here and maybe even the play-offs and the first 45 minutes wasn’t good enough.

“We reacted well in the second half but we needed to.

“I didn’t think I was too good myself in the first half but in the second half I got on the ball a bit more and created one or two chances and put a couple of good crosses in, which I was pleased with.

“In the past, when you are young, you are told to play good football and the result is not all-important. I think winning is just inside you and when you play first team football, it’s all about the points.

“If you don’t play too well and you get the win it’s much better than playing well and losing. And as soon as you’ve lost one, you’re looking forward to the next one and hopefully we can get the three points today against Wolves. 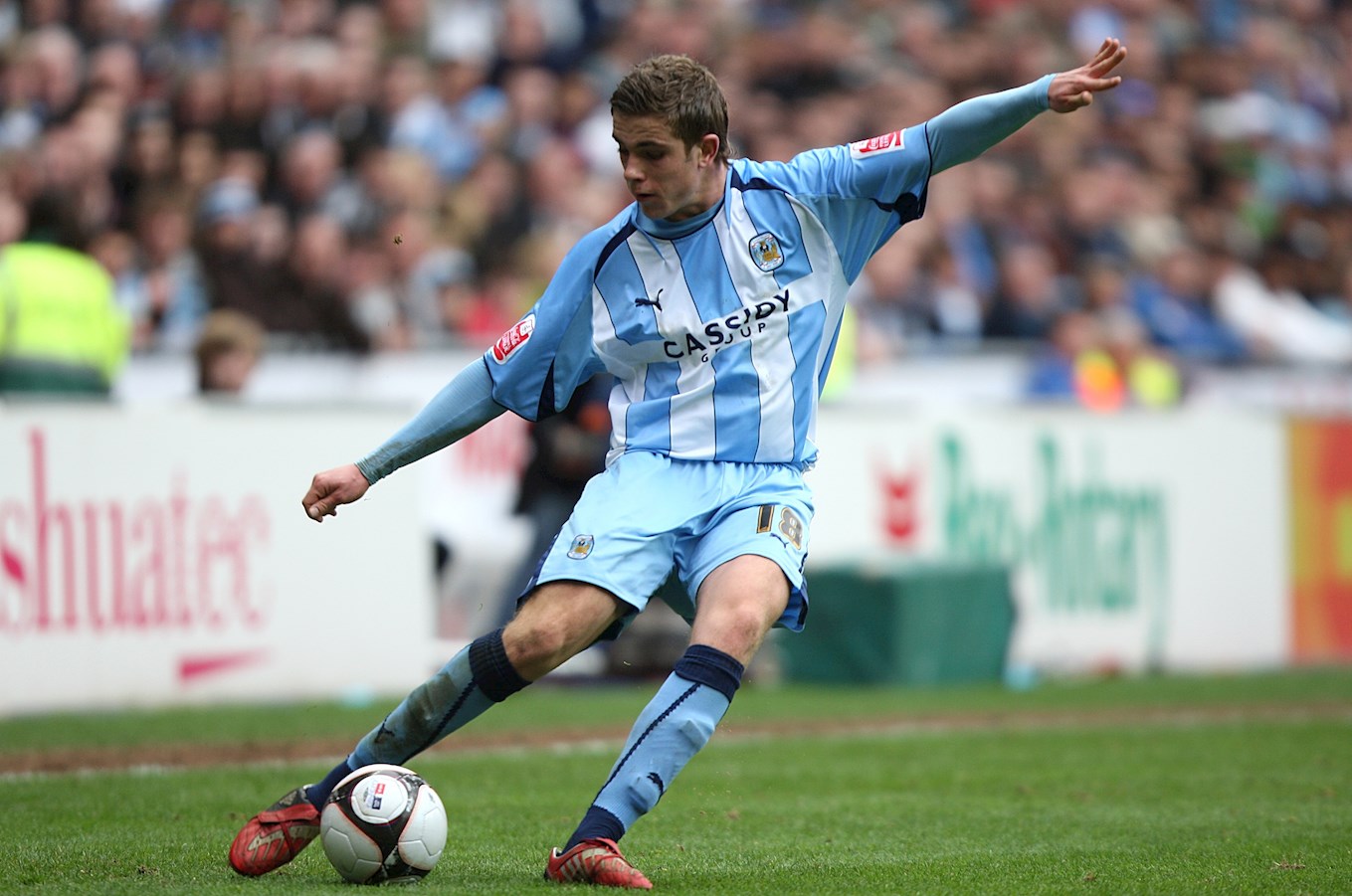 “The manager said to us at half-time that we needed to do a lot more and said that we were not working hard enough, not working as a team, not winning our fifty-fifties.

“I thought the lads reacted to his comments but you can’t start making excuses for the first half.

“It’s all experience and that’s what I need. The manager might give us a talking to at half-time but I thought it worked. We are here to do a job and we have to do it for 90 minutes not just for 45.”

Spoken like a football manager. But then Henderson has had the benefit of hearing the wise words of one of his footballing heroes for a couple of years.

Although he joined Sunderland as a seven-year-old and has supported the Black Cats through thick and thin, the teenager has always had a soft spot for Manchester United.

One of his idols was Roy Keane so when he took over at the Stadium of Light in 2006, it was a dream come true for Henderson.

He said: “I have been with Sunderland since I was a seven-year-old – so that’s 11 years and this is the first time I’ve been away from the club on loan.

“I am enjoying it and it’s going to be a great experience for me.

“Sunderland has a great academy but I don’t know what other clubs are like so it’s difficult to compare but Coventry’s a nice place too.

“But for me, I don’t mind what the place is like or where I am, it’s about training as hard as you possibly can and then playing on a Saturday.

“You have to put a shift in and hopefully get your reward for that.

“When I was seven I joined Sunderland’s school of excellence and then when I was 11 or 12, I moved up to the academy.

“I’ve never thought about doing anything else but being a footballer but I don’t expect this on a plate. I know how hard you have to work and you have to do a lot of things to get there.

“Sometimes, it can be easier to actually get there to begin with but then the difficult bit is maintaining the standard once you have made it. I want to keep improving every day.

“But the major one is Roy Keane. Every player was influenced by him at Sunderland.

“He expected the best from you. Whether it was discipline or effort, he wanted it. 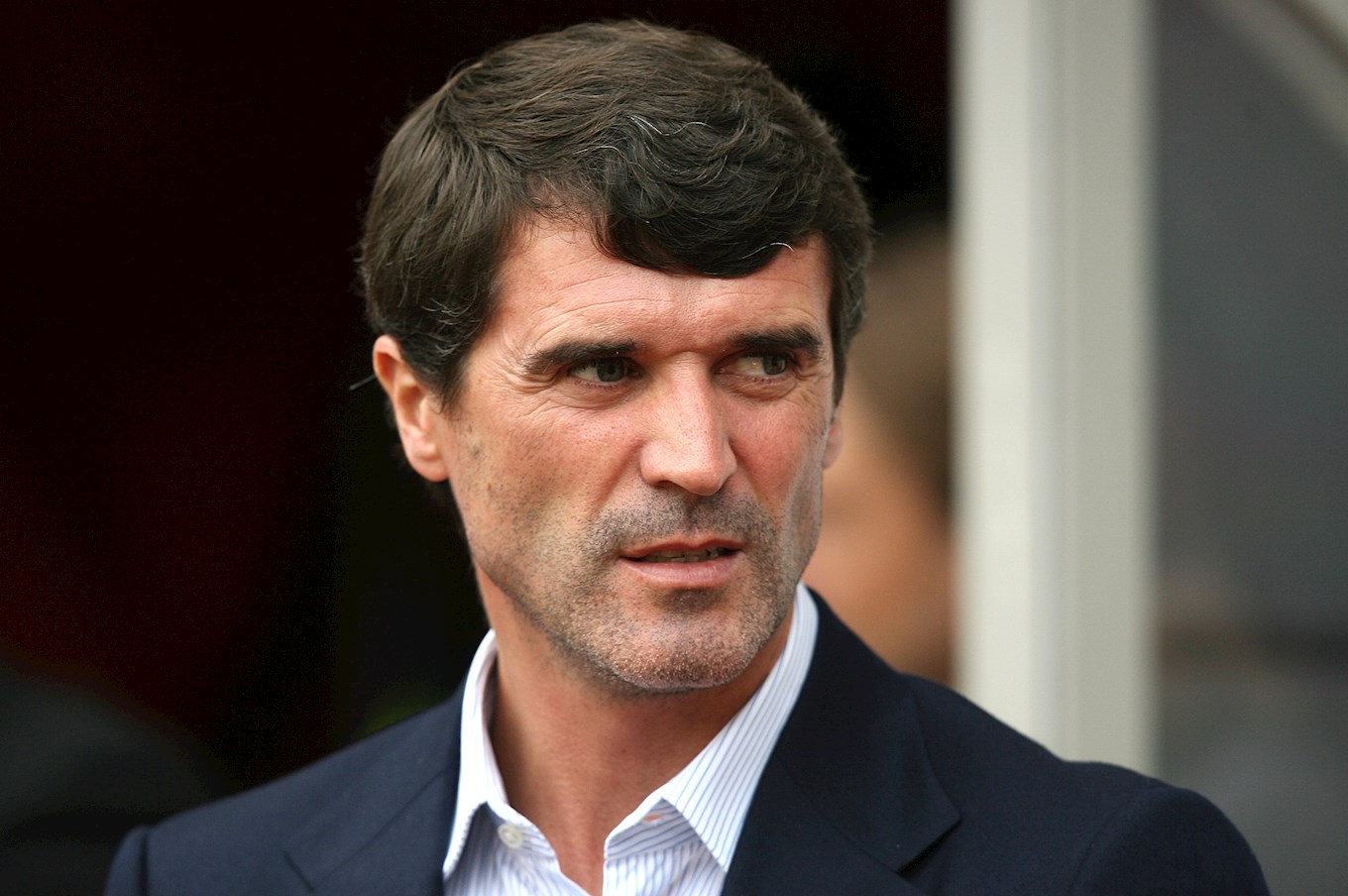 “He wanted 100 per cent from you every time you played and every time you trained. That can only make you better. He played for the best club in the world in Manchester United and I thought he was a top manager.

“It was a privilege to play under him. He was one of my idols. When I was younger I used to support Manchester United and I’d watch David Beckham, Ryan Giggs and Roy Keane and would think these were the best players in the world.

“For him to come and manage the club that I was at and for him to give me my debut was unbelievable. I appreciate that.

“Winning is inside you and Roy Keane took a really close eye on that. In training, he would look at which teams were winning, which players were winning and that’s all he cared about.

“Whether it was table tennis, golf or tennis, he just wanted to win!

“A lot of sports people are like that. I just hate being beaten at anything. I can’t take it. It’s not very often that it happens though!

“But I love competition with the lads and I love playing tennis or squash with them, but I don’t like to lose to them.” 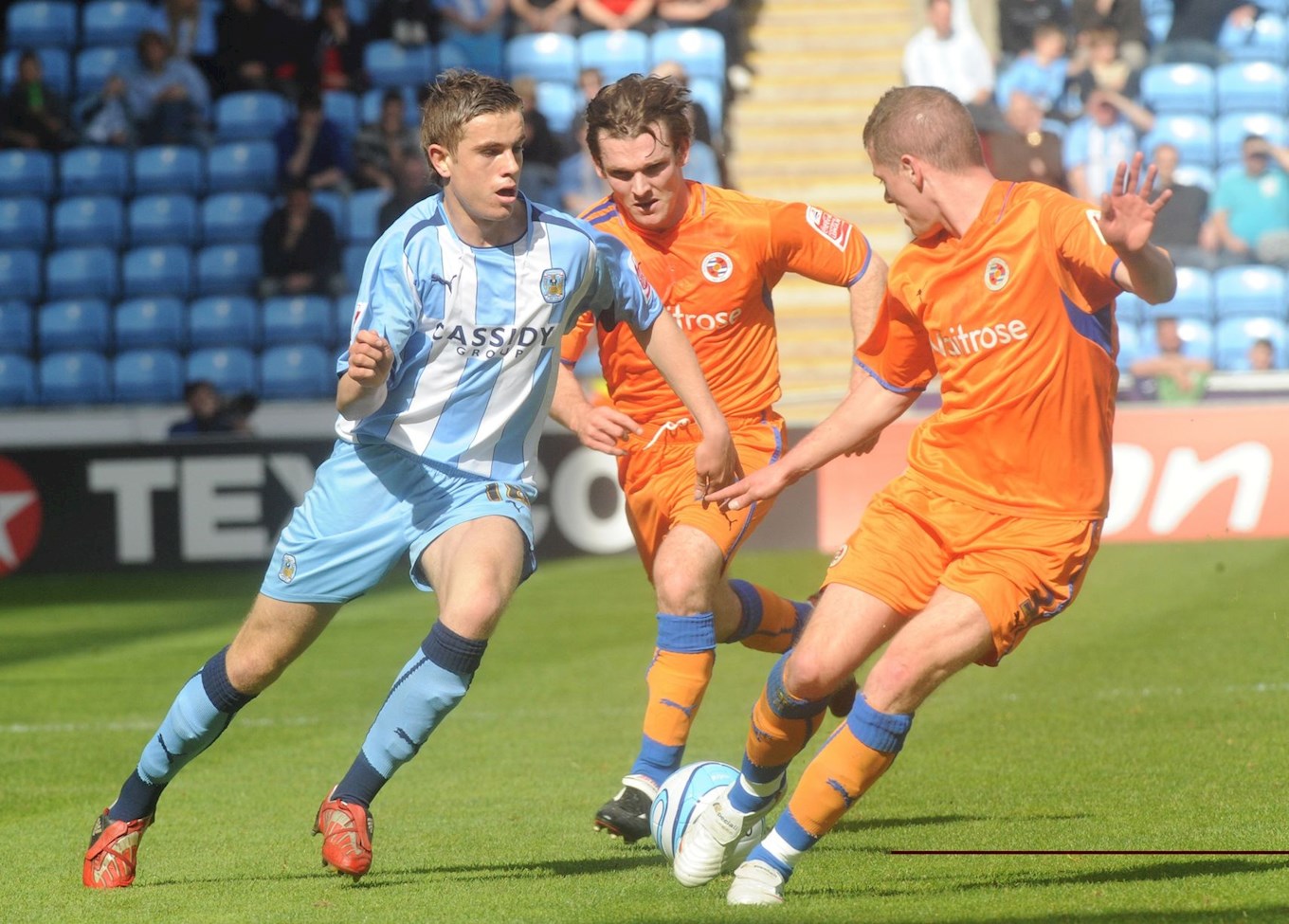 That winning mentality is exactly what City boss Chris Coleman is looking for and Henderson hopes to make in impression on the former Welsh international defender.

It’s the first time that he’s lived away from home and, while he admits he misses his day-to-day life with family and friends, he says making the most of his 28 days with the Sky Blues is uppermost in his mind.

He said: “You have to adapt when you are on loan. It doesn’t matter how long you are going to be here. I am here to work hard and do my best for Coventry.

“The lads have made me feel welcome and I will just keeping doing everything I can to impress.

“There’s a couple of ways to get a chance in the first team at your own club. You can play well week-in, week-out for the reserves and your chance might come or you can go on loan into the Championship or League One and get a few first team games under your belt there.

“Once you’ve got that bit more experience you might get your chance in the Premier League.

“Coventry seems like a good club. The lads have been brilliant and everyone has made me feel really welcome.

“I’m staying in a hotel and it can get a bit boring but, at the end of the day, I am here to play football and it’s not going to hurt for a few months to not be able to do anything outside of that.

“Football is my life – it has been since I was a little boy. It’s all I’ve ever wanted to do so I am prepared to give up everything I’ve got to become a footballer – whether that’s leaving home or leaving my friends. My number one priority is football.

“I’ve dreamt of this since I can remember and I have never wanted to do anything else.

“I’ve only been here a week, but Chris Coleman seems like a very good manager. He expects the best – like Roy Keane really.

“He expects you to give your best and to offer 100 per cent to the team. He wants to see hard work and improvement every day.

“I feel settled now. At first I was a little bit nervous about coming in but now I’ve been here a week or so, and it’s great.” 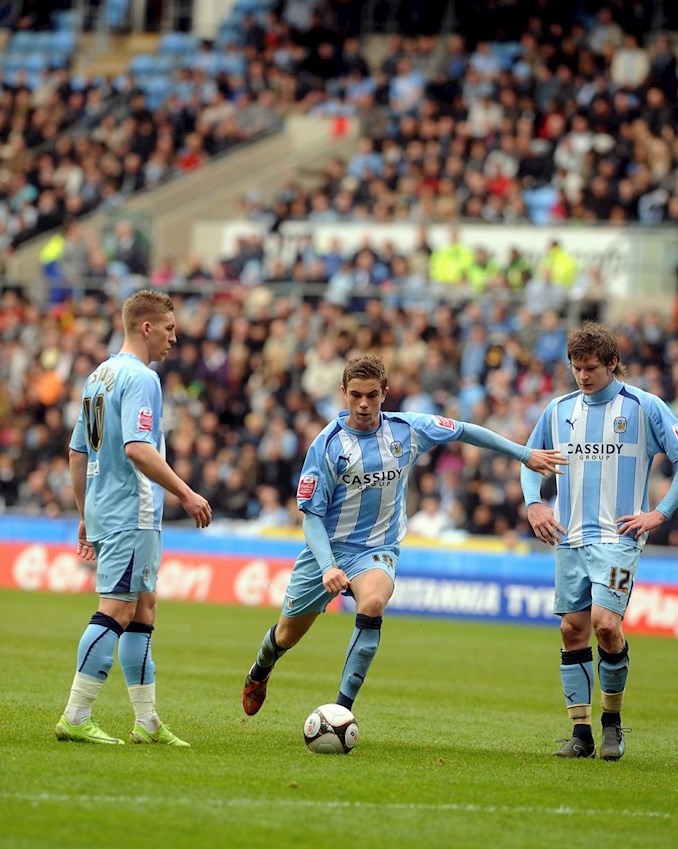 Henderson is desperate to start today against Wolves and, if he does, City fans will undoubtedly see him giving his all.

Not only is he keen to please his adopted supporters, the Coventry manager, his team-mates and his mother club Sunderland, he’s also got his own band of travelling fans.

He said: “I had a lot of family and friends at Derby last weekend – 10 of them! One of the lads at Sunderland came down too which was great.

“They will all be down for the Wolves game too. You have to play football for yourself but there are a lot of people along the way who have helped you, like your family.

"There will be a lot of people here to watch me and I just want to go out and make them all proud.” 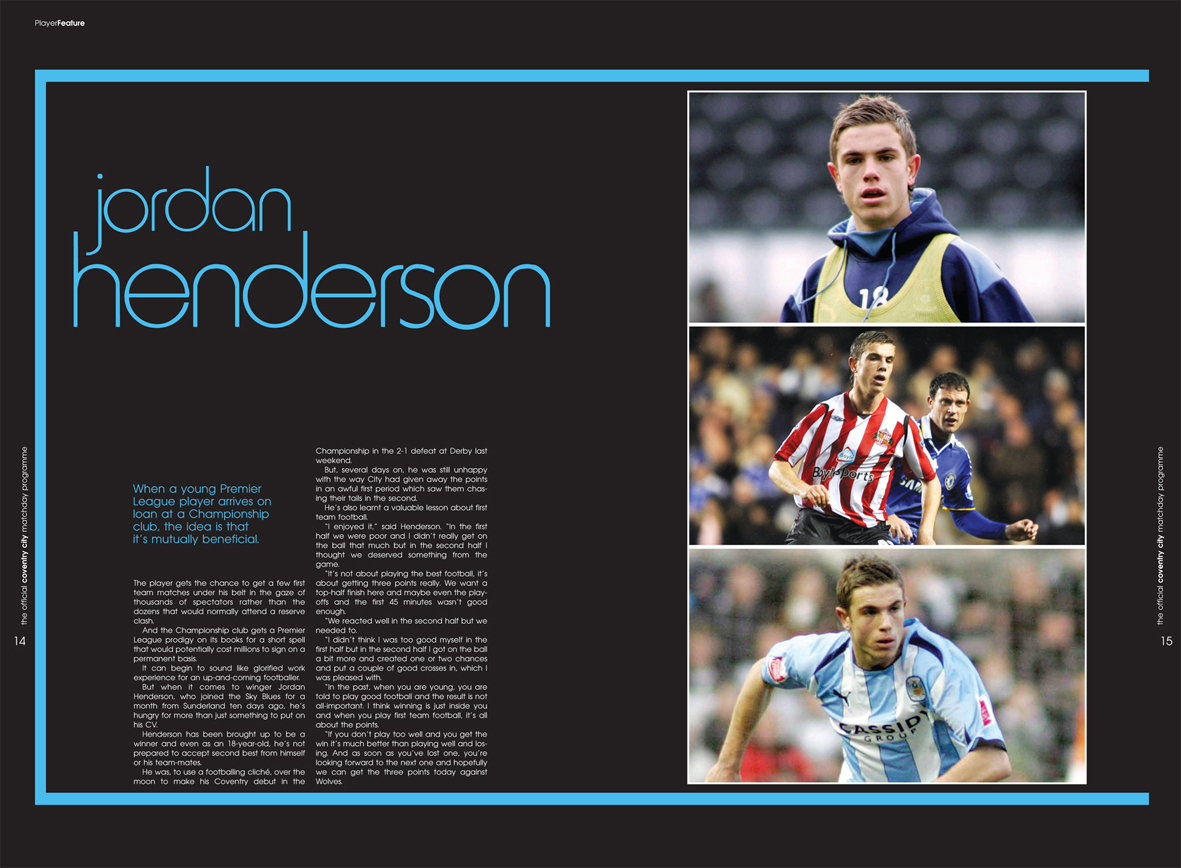 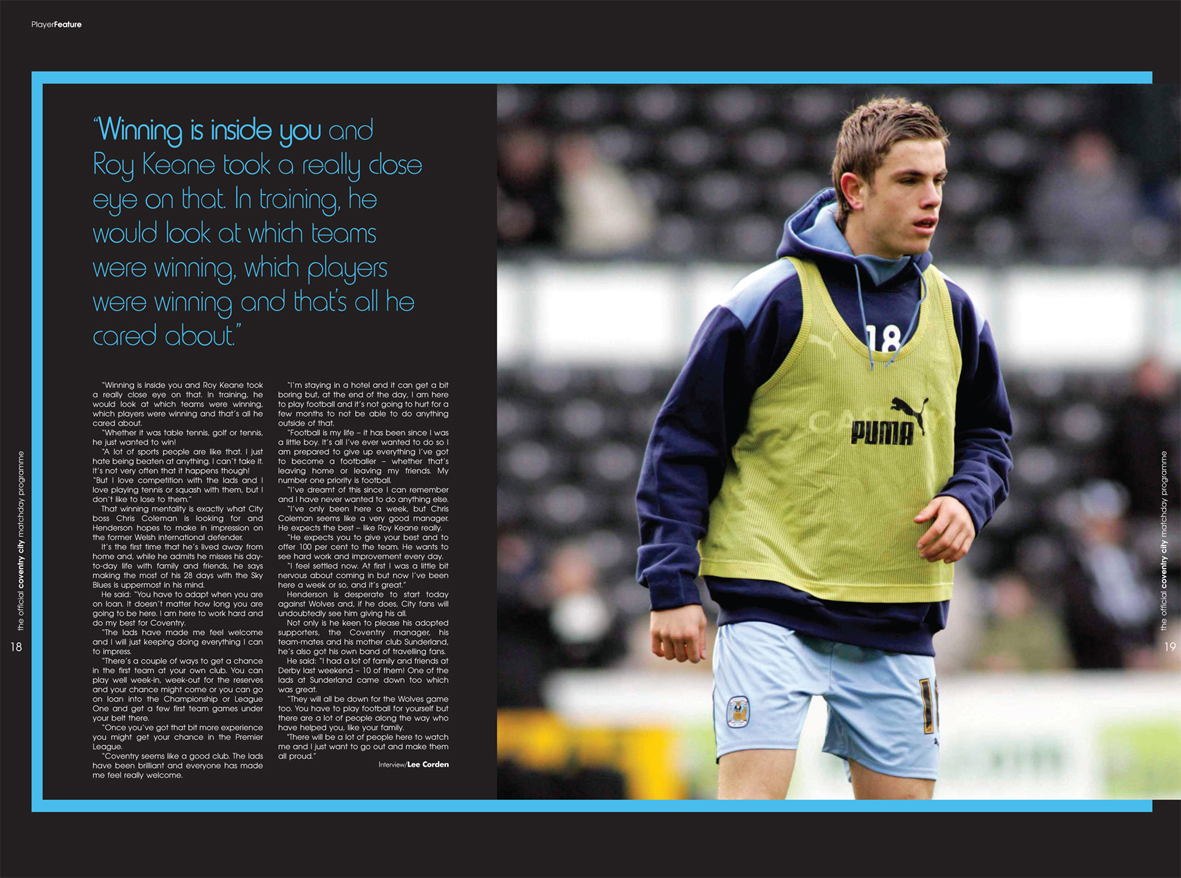