Dick Bayliss was Coventry City’s first post-World War Two manager. Appointed in June 1945, he was in charge until April 1947, when he passed away three weeks before what would have been his 48th birthday.

When appointed, Bayliss was not a fresh face for the brave new world of the post-war era. He already knew Coventry inside out and back to front, having been at the club since 1931. Throughout that period of close to a decade and a half - an era that away from football had witnessed the depression and the rise and fall of Nazi Germany, and Coventry as a city suffering more than most - he had been the right hand man of Harry Storer, a role that included Bayliss being chief scout.

Storer’s story had seen City climb into the Second Division having been promoted for the first time in 1935-36 as champions of Division Three South. After the war Storer decided to have a fresh start himself, taking over at Birmingham City, although there would be another chapter to be written about him at Coventry where he would return in November 1948.

Storer was a tough disciplinarian so perhaps some of the players saw Bayliss as a lighter touch once the old gaffer was gone, especially as Dick inherited an ageing side who were largely the pre-war squad who had seen it all before. 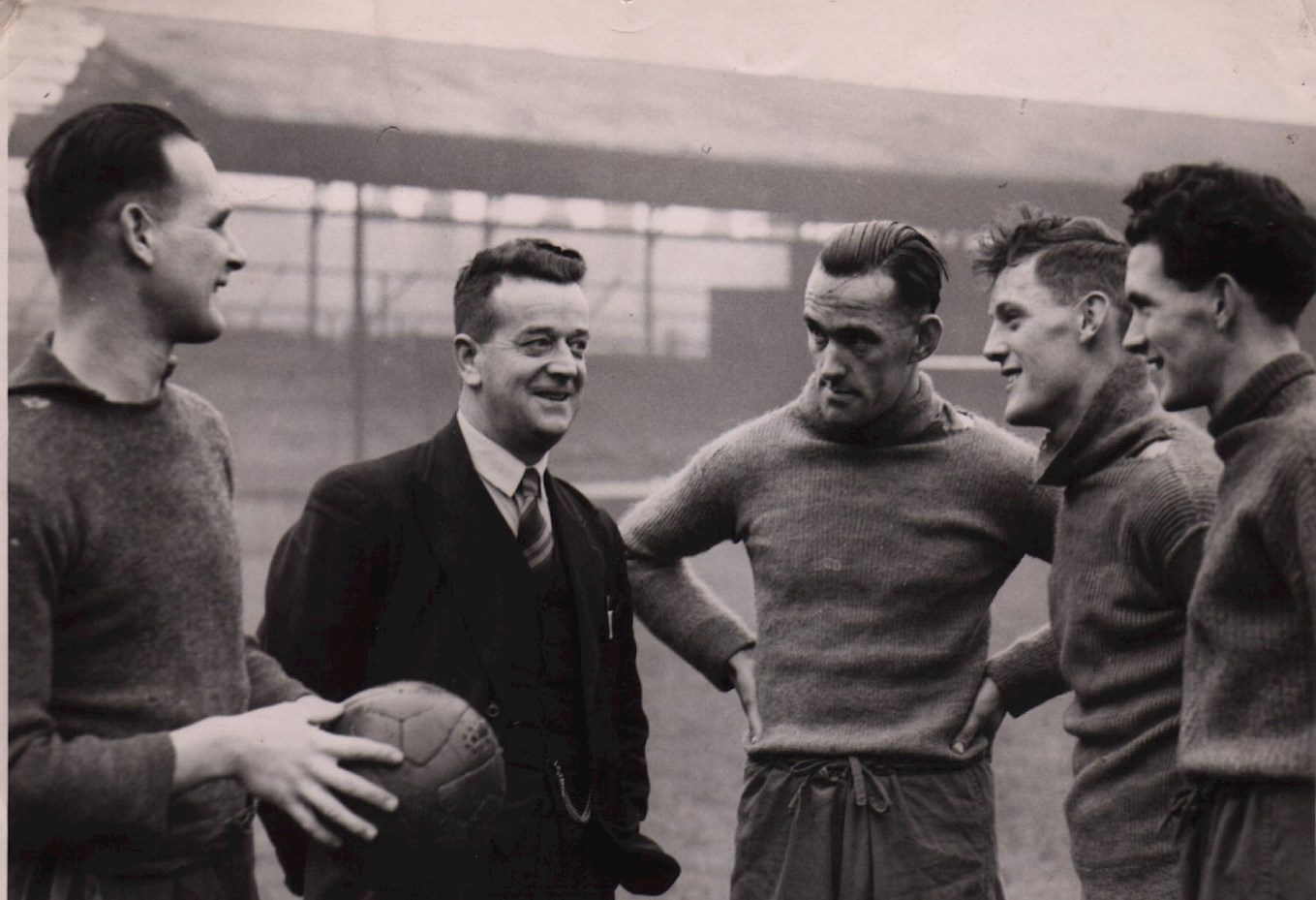 Hardly surprisingly, Bayliss concentrated on trying to bring new young players into the ranks. He had a successful track record of recruitment, a talent which even today is notoriously difficult.  Nowadays the internet, highlights reels commissioned by agents, who in 90 seconds can make plodders look something like Pele, and the motorway network can make scouting a lot simpler than it was seven decades ago. Tragically it would be such a scouting mission that would be responsible for the early death of a man who gave so much of his young life to Coventry City.

It was testimony to his dedication that despite the notorious winter of 1947 Bayliss still undertook an arduous January scouting trip, looking as always for new talent to bring to his club. Sadly, his health took a turn for the worse after picking up a chill on that spotting trip to Scotland when he was stuck in a snowstorm in Yorkshire as he tried to get home. For weeks afterwards he was unwell but still came to work at the club before it was discovered that he had an incurable kidney disease.

On 5th April 1947 Dick Bayliss passed away at home in Coventry following a short stay in a nursing home in Kenilworth. He was survived by his wife Ethel. That same afternoon nineteen and a half thousand came to see Coventry pay their own tribute, beating Sheffield Wednesday 5-1 at home with George Lowrie scoring four of City’s goals. News of their manager’s death must have been a sombre-postscript to a big victory that left the club ninth in the table with an impressive home record, having lost just one of 16 games. 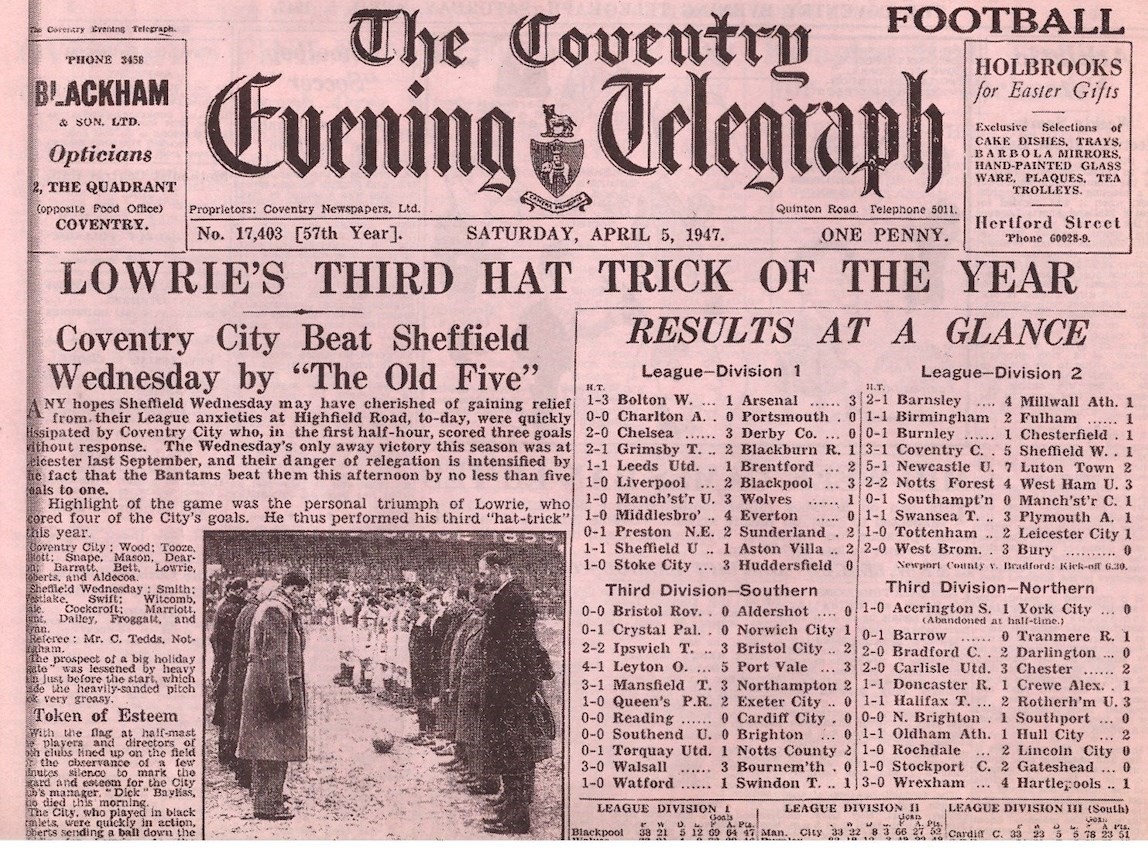 City had done well under Bayliss. For his first season after the war the Football League did not resume. Instead Coventry participated in a competition called Football League South. It was a campaign of 42 games with almost all of the fixtures played as double-headers at home and away to the same club. Impressively the team of the thirties, Arsenal, were beaten 2-0 at home in Bayliss’ first game – Lowrie scoring the first goal of his reign – with a goalless draw achieved at Highbury the following Saturday.

City twice scored seven at home, against Newport and Millwall but also lost heavily at Highfield Road, 5-2 to West Ham who completed the double a week later when City’s three goals were only half as many as the home side notched.

Coventry finished 13th of the 22 clubs, five of which would be top flight outfits when the Football League resumed the following season. Although City weren’t short of games given the Football League South competition, due to the lack of competitive games being experienced by some clubs in the north, for one season only it was decided that the FA Cup would be played over two legs. But for that Bayliss would have enjoyed a notable cup triumph over Aston Villa who succumbed 2-1 at Highfield Road, only to overturn that score-line in the second leg where City went down 2-0.

Goalkeeper Alf Wood and the versatile Harry Barratt managed to play in every match but the nature of the game in the aftermath of the war was that no fewer than 14 players were called upon for a single league game. Another six men made four or fewer appearances, with nine different men turning out at inside right during the season which ended with an adventurous and unbeaten four game tour of Denmark. The manager had the basis of a team but needed to build a side equipped for the resumption of league football in 1946-47. 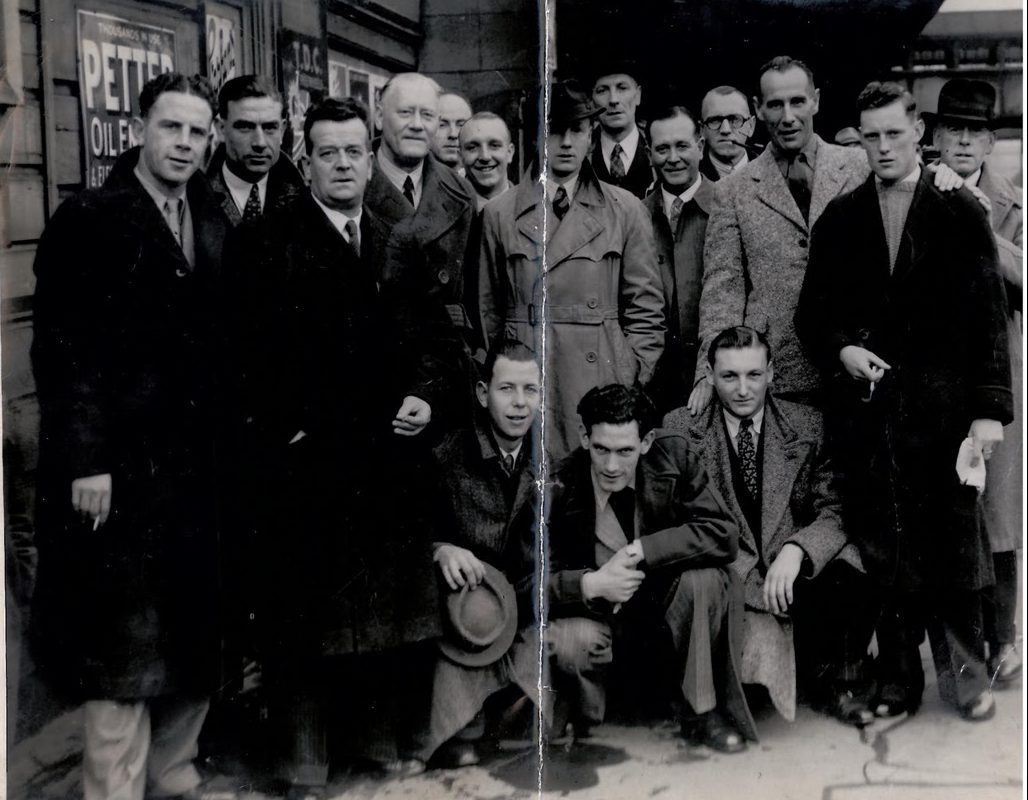 It was the man Dick signed to wear that inside-right number eight shirt who kicked the season off with Coventry’s first post-war league goal in a 1-1 draw at Burnley. A week later the same player netted the first in a 3-2 win over West Brom watched by a crowd of just under 24,000 – bigger than any of the Football League South attendances, albeit 27,197 had witnessed Villa’s cup visit. The newcomer who scored in his first three games was Fred Bett. He cost £3,000 from Sunderland where he had played three times before the war as a teenager. Now at the age of 26 his career was effectively starting although injuries restricted him and he ended up going to Lincoln, one of the clubs he had ‘Guested’ for during the war.

Bett’s early season goals saw City start with a win and two draws in what would be Bayliss’ solitary league season in charge. Half of the games in the first third of the season were drawn and there wasn’t a home defeat until the last home game of the calendar year in the 12th home fixture as Bayliss’ side hovered around mid-table.

Another interesting character whose talents Bayliss harnessed was Spanish refugee Emilio Aldecoa. A left-winger who had ‘Guested’ for Wolves during the war, he became an integral part of Dick’s emerging team. Aldecoa later went on to play for Barcelona and Spain and was evidently a bright spark at Highfield Road – which he helped to repair after the war having previously been with an electrical works team. 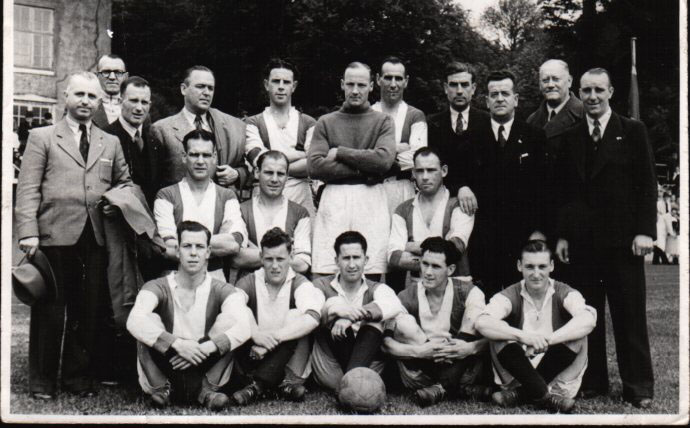 Solid foundations were being laid and 1947 began really well. A 2-0 win at Barnsley preceded Newport County coming to Coventry on successive weekends. They must have wished they hadn’t as City followed up a 5-2 league win with a 6-0 cup triumph. Football form can change quickly of course and a six game winless run preceded a 2-1 win at West Ham in the last game before Dick died, those stalwarts of his time, Bett and Lowrie being on the mark.

The death of Dick Bayliss hit the club hard. Coming so soon after the war, loss was something people understood in a much more poignant sense than the loss of a football match.  A month after the manager died 8,777 people came to a Testimonial match in his honour as Coventry took on a Combined Birmingham XI. 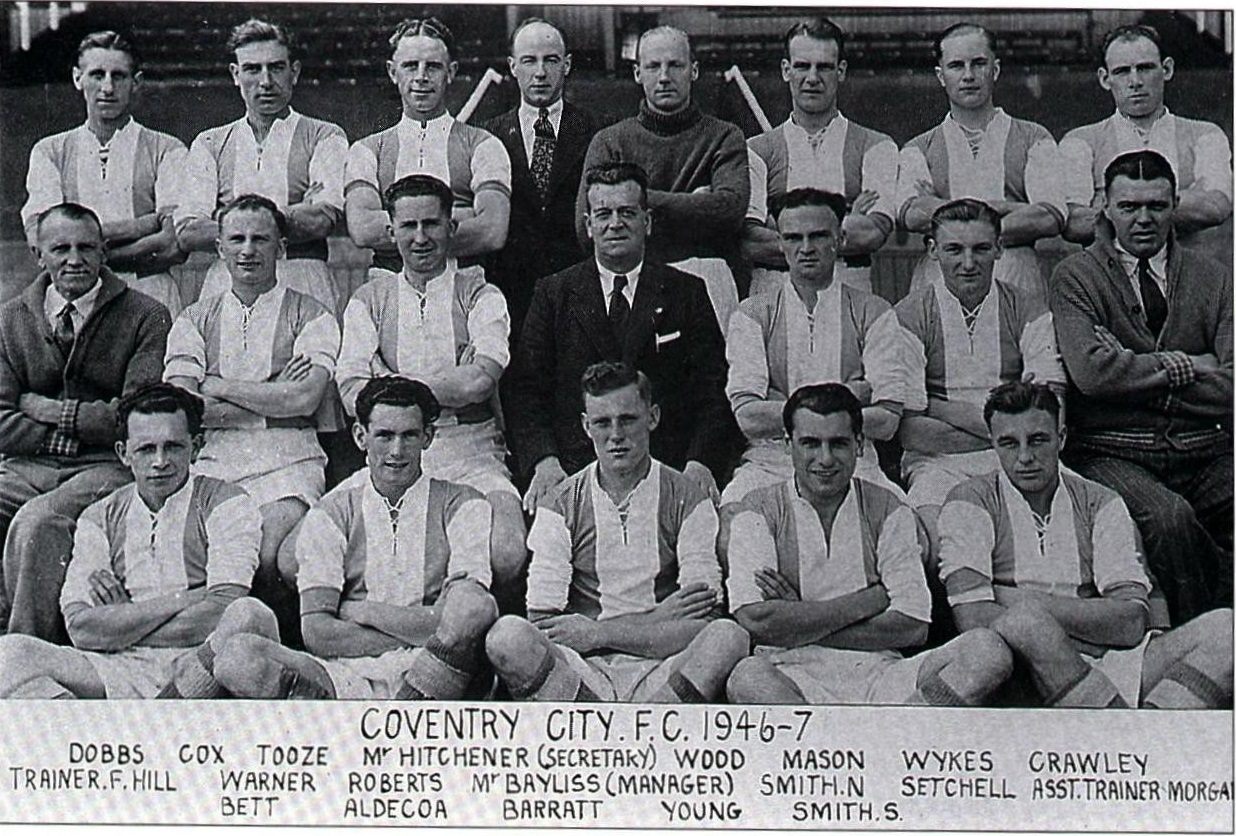 Leonard Richard Bayliss had been born in Alfreton on 28 April 1899. His father George played for Alfreton Town and Dick began with Alfreton Rose Villa, playing for them while working as a coal miner. The side were so successful they lifted the Erewash Valley League Cup three years in a row.

In September of 1920 he got the chance to leave the pits behind and sign for Luton Town. He made just a solitary first team appearance for the Hatters before moving briefly to Mansfield Town and then to Southend United where he made eight league appearances only to suffer a bad knee injury in 1926. 47 stitches later he was a less than pretty sight and it soon became evident that whatever aptitude he had for football would be in recognising the talents of others rather than realising his own.

Full-backs Walter Metcalf and Jack Astley and Wales international inside-forward Les Jones were amongst the players Bayliss’ talent spotting added to the ranks of Storer’s successful side of the thirties. It was a team that after being promoted in 1936 finished fourth in the two seasons before the war. Only two went up then but had that team been allowed to develop, quite possibly Coventry’s wait for top flight football would have ended in the early forties rather than in 1967. 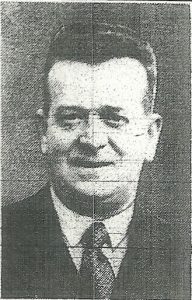