The Premier League website has been looking at the funding England's top flight provides to EFL Clubs, including Coventry City.

The success of the Premier League both at home and around the world allows it to make a significant contribution to the UK economy and the wider game, something which has come into focus after the UK Government asked the PL to provide additional funding to Clubs - rather than the Government itself providing the support it has for other industries and sports in the Coronavirus pandemic.

Alongside generating £3.3billion in tax annually for the UK government, including £1.1billion from the players alone, the Premier League directs crucial funding throughout the football pyramid.

This supports clubs in the EFL and the National League, not just with core solidarity payments to assist their general costs, but also investment into their wide-ranging community programmes, and to fund their development of young players in their academies.

Last season, when in League One, Coventry City received a core club "solidarity" payment of £675,000, as well as £713,000 investment into their academy operations, and another £237,000 to support Sky Blues in the Community programmes.

"The Premier League already provides substantial support each year to EFL Clubs," Coventry City Chief Executive Dave Boddy said of the funding. "Without this existing support EFL Clubs would not be sustainable in their current guise and standards, and the product would be unrecognisable to what it is today.

You can read the full article on PremierLeague.com by clicking here.

You can also view infographics to see the funding the Premier League has provided to each EFL Club via this link. 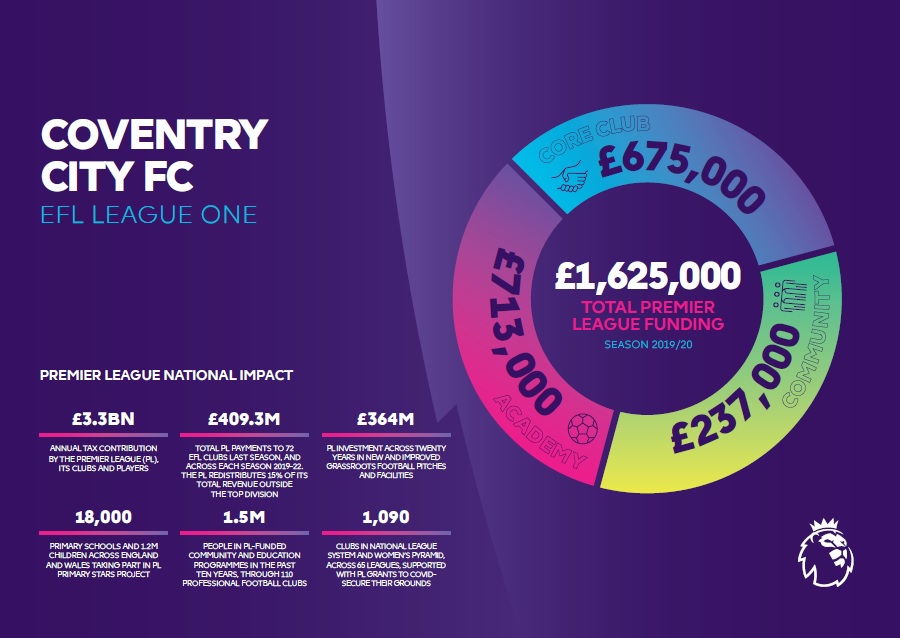