We all know the Steve Ogrizovic story.

A true Coventry City legend, he joined the Club in 1984 from Shrewsbury Town and hung up his gloves in 2000 after 601 games and 1 goal for the Sky Blues.

Oggy played 246 consecutive games (209 league, 29 Cup, 8 others) from his debut until getting injured at Millwall in September 1989.

Of course after retiring from playing he then joined the coaching staff at the Club, retiring as Goalkeeping Coach last May.

But what happened to the men who were understudies or tried to displace Oggy as the Sky Blues number 1?

While there are players such as Perry Suckling or Peter Shilton who were on the books but didn’t play, we look at the other keepers who made at least one appearance for City during that period…

Sunderland fan and trainee Waugh had long spells in the 70s and 80s with Peterborough United, Sheffield United and Bristol City, playing over 350 league games for the three sides in total.

His second and final appearance for the Club was not so memorable, City losing 3-1 at Grimsby Town in the League Cup Second Round, First Leg. Oggy returned for the next league game against Chelsea.

Waugh joined Watford in 1991 and made 7 appearances for the Hornets, playing his final league game in April 1993. He then became a youth team coach at Vicarage Road until 1994, before joining Bedfordshire Police and then working in security. 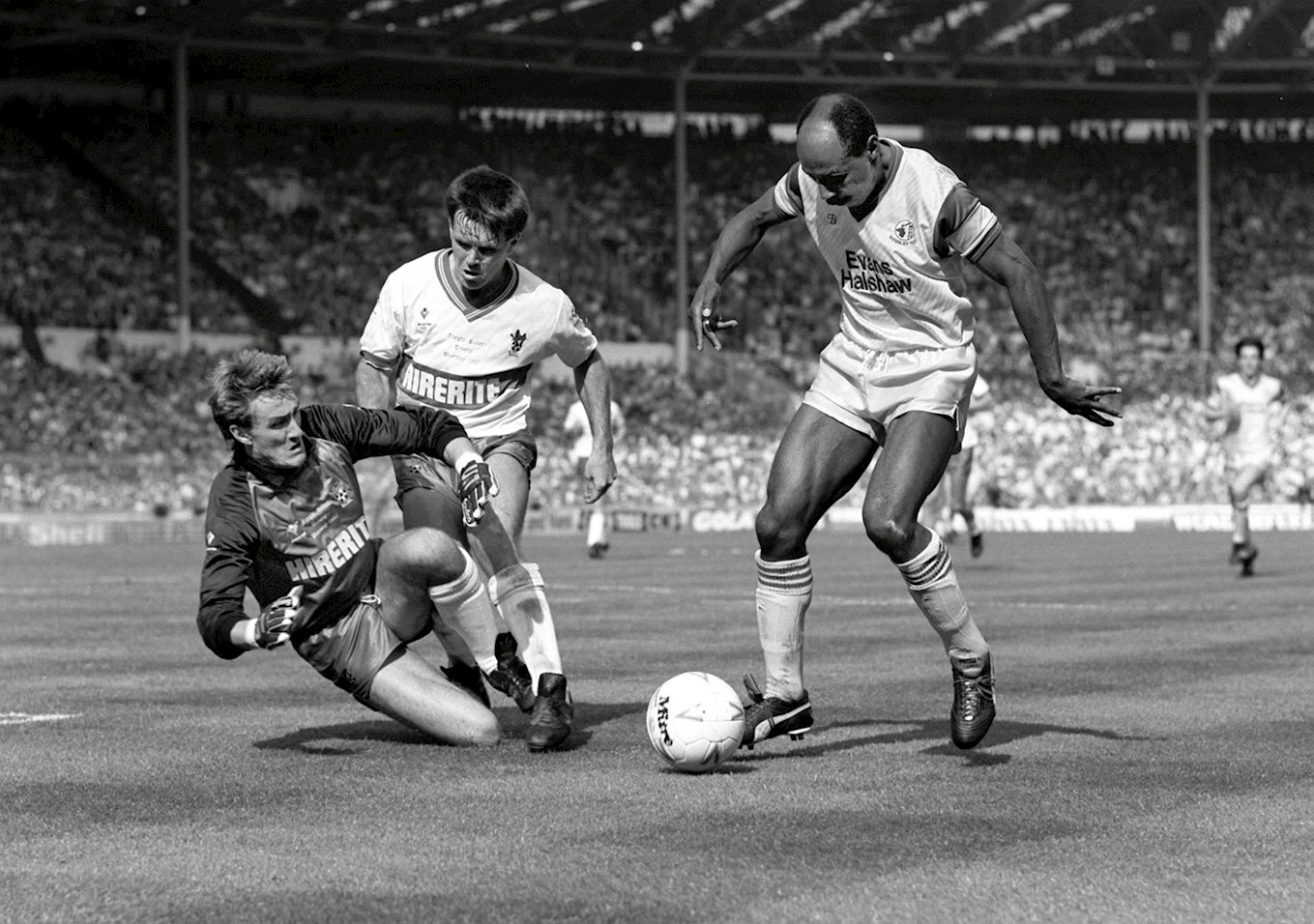 Waugh in action for Bristol City in 1987.

Baker began his career at Norwich in 1977. He moved to Barnsley in 1984 and made over 300 appearances for the Tykes, twice winning their Player of the Year award, before leaving in 1991 for Highfield Road.

Joining aged 32, he didn’t make a league appearance. His one game was a 1-0 defeat at Rochdale in the League Cup Second Round on 8th October 1991.

He moved to Ipswich in 1992, becoming one of the few players to appear for both East Anglian clubs. He retired at the end of the 1994-95 campaign, and moved into the insurance industry. 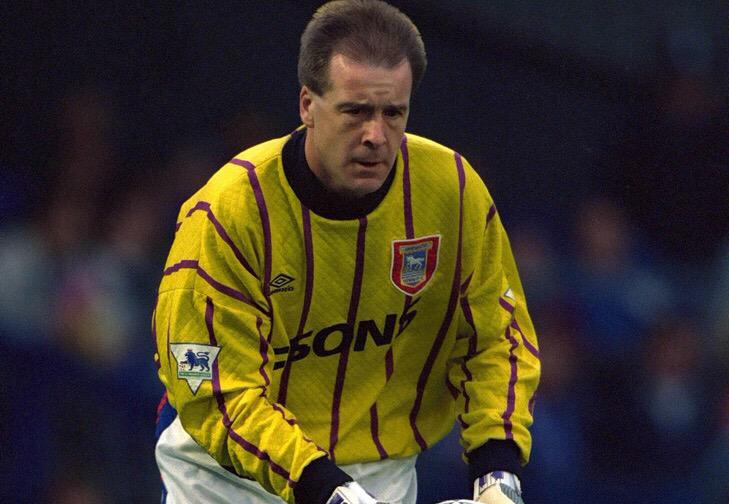 Baker in action for Ipswich

A Nottingham Forest stalwart from 1979 to 1992, winning the League Cup twice, Sutton made a brief loan move to the Sky Blues in 1991 from the City Ground after Mark Crossley grabbed the number 1 jersey.

Made his only appearance for City in a 1-0 defeat at Wimbledon in February 1991.

After Forest, he joined Derby and played for them from 1992-96 followed by brief understudy spells at Birmingham City and Notts County. He retired in 1998.

Coaching positions followed Leeds and Notts County, before returning to Forest in 2006. Initially with the youth-team, in 2015 he began working with the first-team before leaving in May 2017. 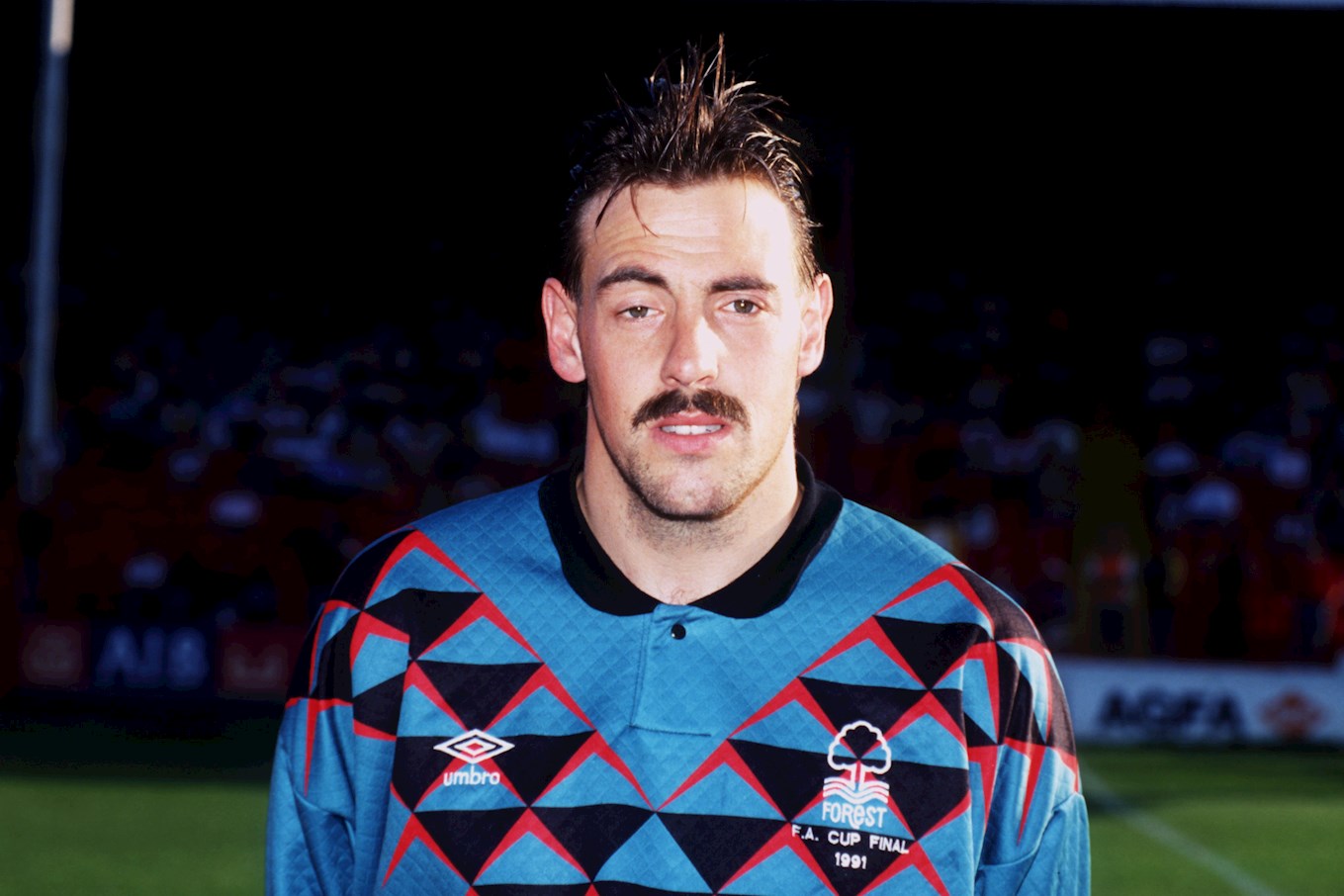 Started his career at Sheffield United in 1987, joining Leyton Orient in 1988. He made 176 league appearances at Orient, but it was from there that he was loaned to the Sky Blues.

Oggy suffered an injury in training in March 1992, and Heald made the temporary move to Highfield Road. He made his debut in a 1-1 draw at home to Oldham on 21st March, and his final game was the 4-3 loss at Tottenham one week later where defensive mistakes cost the Sky Blues – Heald then returning to Orient.

In 1995, he joined Wimbledon and was mainly deputy to Hans Segers and Neil Sullivan but did play 38 league games for the Club – interspersed with a 2002 loan to Sheffield Wednesday. Heald made the move to Milton Keynes with MK Dons, but did not make an appearance. Since retirement he has been goalkeeping coach at Stadium MK. 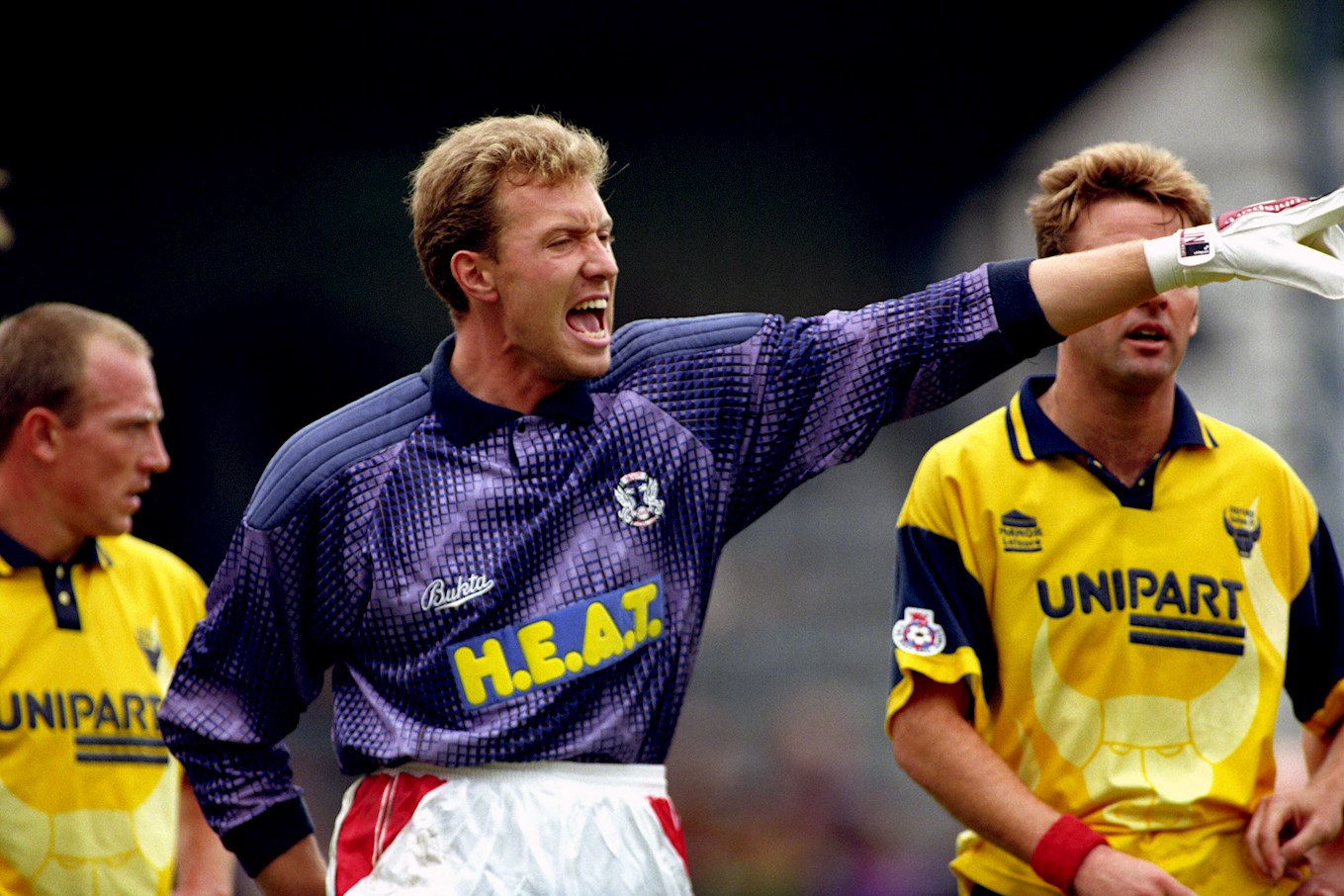 Heald at Leyton Orient in 1994

Colourful keeper Sealey began his career at Highfield Road, playing 178 times from 1977 to 1983 – making his debut as 19-year-old. He left the Club under a cloud and joined Luton Town from 1983 until 1990, but at the end of the 1989-90 season had a 2 game loan at Man United – one of those games being the FA Cup Final replay where he was chosen ahead of Jim Leighton.

United signed Sealey on a permanent basis, and he was their regular goalkeeper throughout the 1990–91 season. He turned down a new one year contract at Old Trafford in favour of a two-year deal with Aston Villa. First choice at the start of the season, he lost his place to Nigel Spink and joined City on loan in 1992.

After Paul Heald (see above) held the jersey for 2 games, it was Sealey’s turn to cover for Ogrizovic. His first game back was a 1-0 home defeat to Arsenal on 4th April, where he could do little to stop Kevin Campbell’s winner, before keeping a clean-sheet on 8th April at Sheffield Wednesday in his final Sky Blues game.

After leaving Villa he returned to Old Trafford in 1993-94, playing only 2 games – but that included the League Cup Final. He moved to Blackpool in 1994, before a spell with boyhood heroes West Ham from 1994-96. Due to an injury crisis, Sealey made his Hammers debut as an outfield player, coming on as an attacking substitute against Arsenal in the autumn of 1995.

He joined Leyton Orient briefly in 1996, returning to West Ham again in December of that year. He made his last first-team appearance on the final day of the 1996–97 season, fittingly against Manchester United at Old Trafford. He was appointed Goalkeeping Coach in 1998, and remained registered as a player. 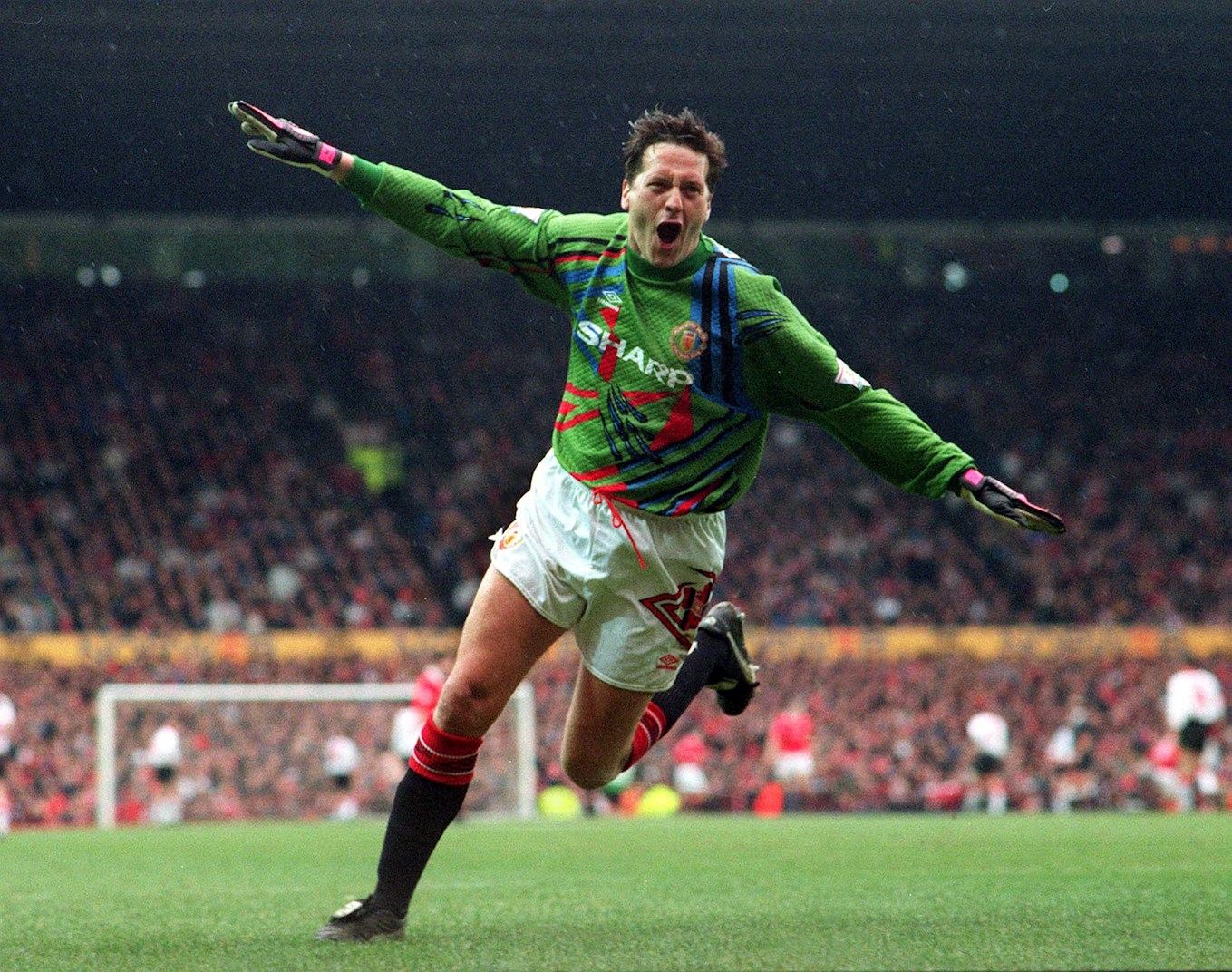 Goalkeeper Gould signed for the Sky Blues from West Brom in 1992. He played 27 times, firstly under father Bobby and then Phil Neal, and for a spell was first-choice ahead of Ogrizovic.

Gould made his debut on 19th December 1992 in a memorable 5-1 win over Liverpool when he deputised for injured Oggy. Steve returned in January, but in April he was dropped in favour of Gould – the first time Oggy had been dropped in nine years, and Jonathan kept the spot until the end of the season. Gould began 93/94 inbetween the sticks, Oggy only returning briefly in September when Gould had flu.

Oggy though returned to the number 1 spot, following the appointment of Phil Neal as Manager. He returned to the shirt in March 1993. He was City’s regular back up keeper, initially playing when Oggy broke his leg at the end of the 1994/95 season but was dropped following a poor performance against Ipswich in favour of new signing John Filan. He would make only one more appearance in 1995/96 – in a 2-0 League Cup win at home to Hull.

He moved to Bradford in 1996, before joining Celtic where he won the Premier League twice, League Cup three times and Scottish Cup once. He also appeared for Preston, Hereford United and Hawkes Bay United in New Zealand. The Scottish international managed Hawkes Bay from 2006-2009, with coaching roles following at Wellington Phoenix and Perth Glory. 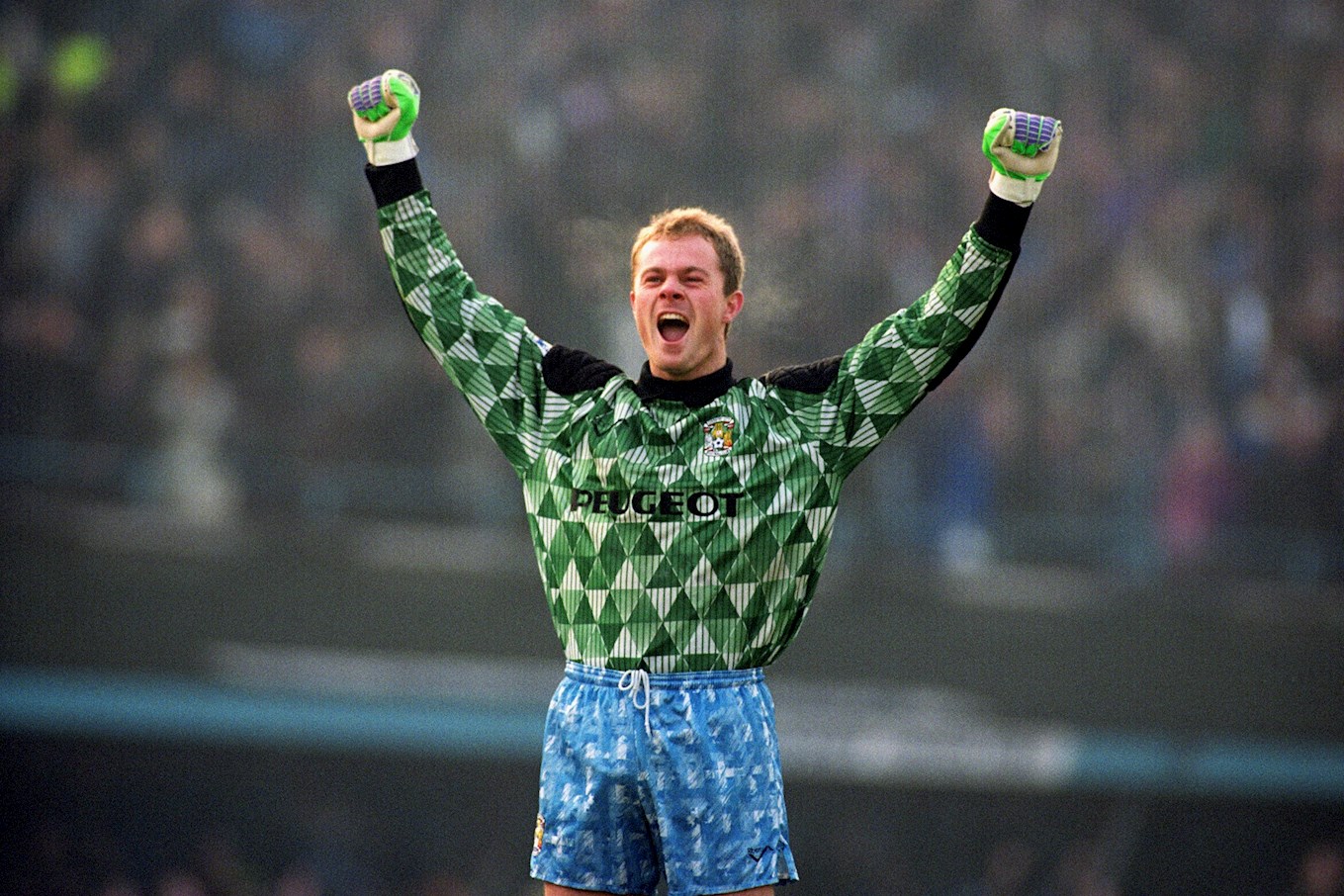 Gould celebrates victory over Villa in 1992

The Australian international keeper first made the move to England in 1993 at Cambridge United, where he remained until the end of the 1994/1995 season when Ron Atkinson signed him for the Sky Blues, playing the final two games in the end of that campaign – replacing for the injured Oggy and the dropped Gould.

Oggy’s broken leg meant he missed the start of the season, with Filan between the sticks until Oggy returned in November – playing 14 games in that run. He played one more game in that season, with just one more in the 1996-97 campaign when he replaced Ogrizovic in the 84th minute against Arsenal following the infamous clash with Ian Wright.

In 1997 he moved to Blackburn Rovers, staying there until 2001. From then until 2007 he was at Wigan, and made nearly 200 appearances there. After a final spell in Sydney in 2008, he went into coaching, notably as Shrewsbury Town assistant manager in 2018. 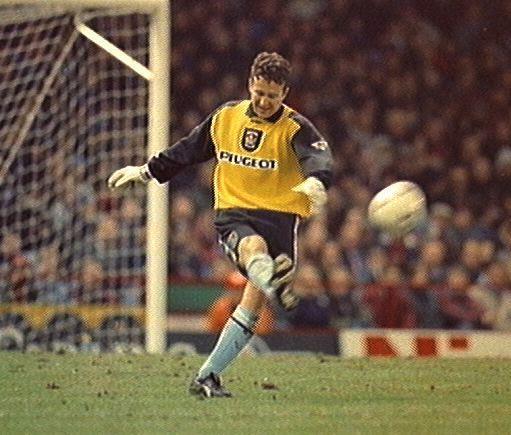 Filan in action for City - December 1995

Hedman was ultimately the successor to Ogrizovic

When Magnus joined the Club in the Summer of 1997 he was the Swedish international side second choice keeper, joined from Swedish side AIK, where he had made nearly 130 league appearances. Oggy was nearly 40, but had underlined the talent he still possessed with magnificent performances as the Sky Blues beat the drop at the end of the 1996/97 campaign.

Aged 24, it took until December of that campaign for Hedman to displace the elder stateman. He debuted in a 4-0 win over Tottenham and only lost his place again in February due to injury. Oggy however was on top form on his return and kept the number 1 shirt almost to the end of the season, Hedman returning for the final three league matches. Hedman made 17 appearances that season, Oggy 30.

Hedman began the 1998-99 campaign as number 1 keeper. Now 41, Ogrizovic was restricted to just two games – a 1-1 draw with Tottenham on Boxing Day and a 2-0 defeat to West Ham two days later. Magnus made 42 appearances in all competitions.

Hedman remained number 1 in Oggy’s final campaign during 1999/00, the veteran playing three times in the Premier League including his swansong at home to Sheffield Wednesday. The next season saw youngster Chris Kirkland wrestle the shirt from Hedman, but the Sky Blues were relegated from the Premier League during that campaign.

Kirkland moved to Liverpool in August 2001, with Hedman then back between the sticks. Hedman left at the end of that season, joining Celtic. In 2006, he joined Chelsea as they went though an injury crisis, but did not make an appearance. He turned out once as an emergency shotstopper aged 40 for Swedish club Frej where he was goalkeeping coach in 2013!

Having had personal issues in recent years, Hedman has rebuilt his life and his company are the main distributors of a popular brand of non-alcoholic wine in Sweden. He attended his first game since leaving the Sky Blues earlier this season.

Hedman in action during his debut season

Nuzzo’s sole game was a 5-1 League Cup defeat at Tranmere Rovers in September 1999. He joined the Sky Blues on loan in June 1999 from Inter Milan due to an injury to Ogrizovic, who was City’s back-up keeper at that point. He returned to Milan in November of that year, with his spell in England one of several from his parent club, for who he only made 1 substitute appearance.

He moved to Reggiana in January 2000 and was largely back up keeper there, though he did have a loan at Wigan in 2001, but didn’t make an appearance. Eventually becoming first-choice at Reggiana, he retired in 2007 from professional football – making a move into beach football instead. 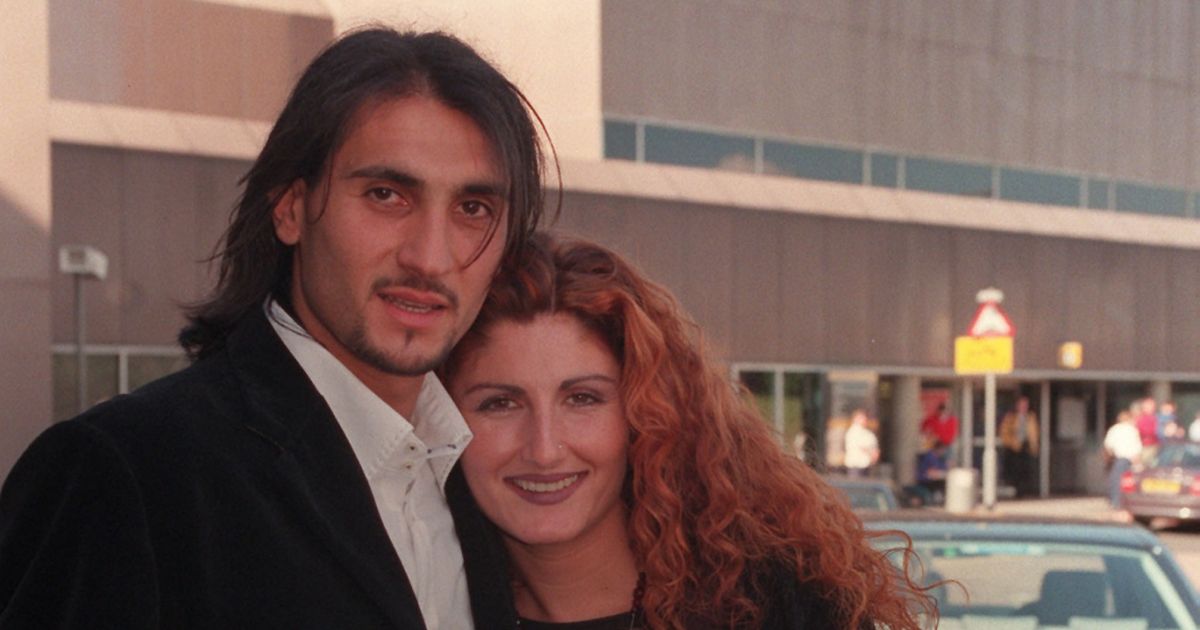 Nuzzo arrives in the UK

Kirkland has cited Ogrizovic as a big influence on his career. An FA Youth Cup finalist with City, Kirkland made his debut for Coventry in the League Cup in a 3–1 victory over Tranmere Rovers at Highfield Road on 22 September 1999. Manager Gordon Strachan began selecting him in Premier League matches ahead of Hedman in the 2000-01 season.

He excelled, despite the Club’s relegation, earning a move to Liverpool. However, his time at the club was scuppered by recurring injuries. He would later sign for Wigan Athletic in July 2006, following a loan period there, and he had further loan spells from Wigan at both Leicester City and Doncaster Rovers before being signed by Sheffield Wednesday in May 2012. He joined Preston North End in 2015, and had a brief spell with Bury with no appearances before retiring in August 2016.

Kirkland won one cap for England in 2006.

A year after retirement from playing, Kirkland took up coaching with Port Vale in January 2017. He subsequently joined the coaching staff of Liverpool Women. He quit the role in March 2019 to focus on running his own goalkeeping academy.

Chris Kirkland during the 2000-01 season