In a feature first published in PUSB, writer Rob Mason investigates international players who represented their country while on Coventry’s books - this time, it's Dion Dublin!

Dion Dublin won three of his four full England caps while he was with Coventry. Now an increasingly regular face on TV, not just on football of course as he hosts ‘Homes Under the Hammer,’ Dion remains as engaging as he always was as a player. Any auctions for Dion the player inevitably saw the price rise as he was invariably a man in demand, with no fewer than three former European Cup / Champions League winning clubs signing him. 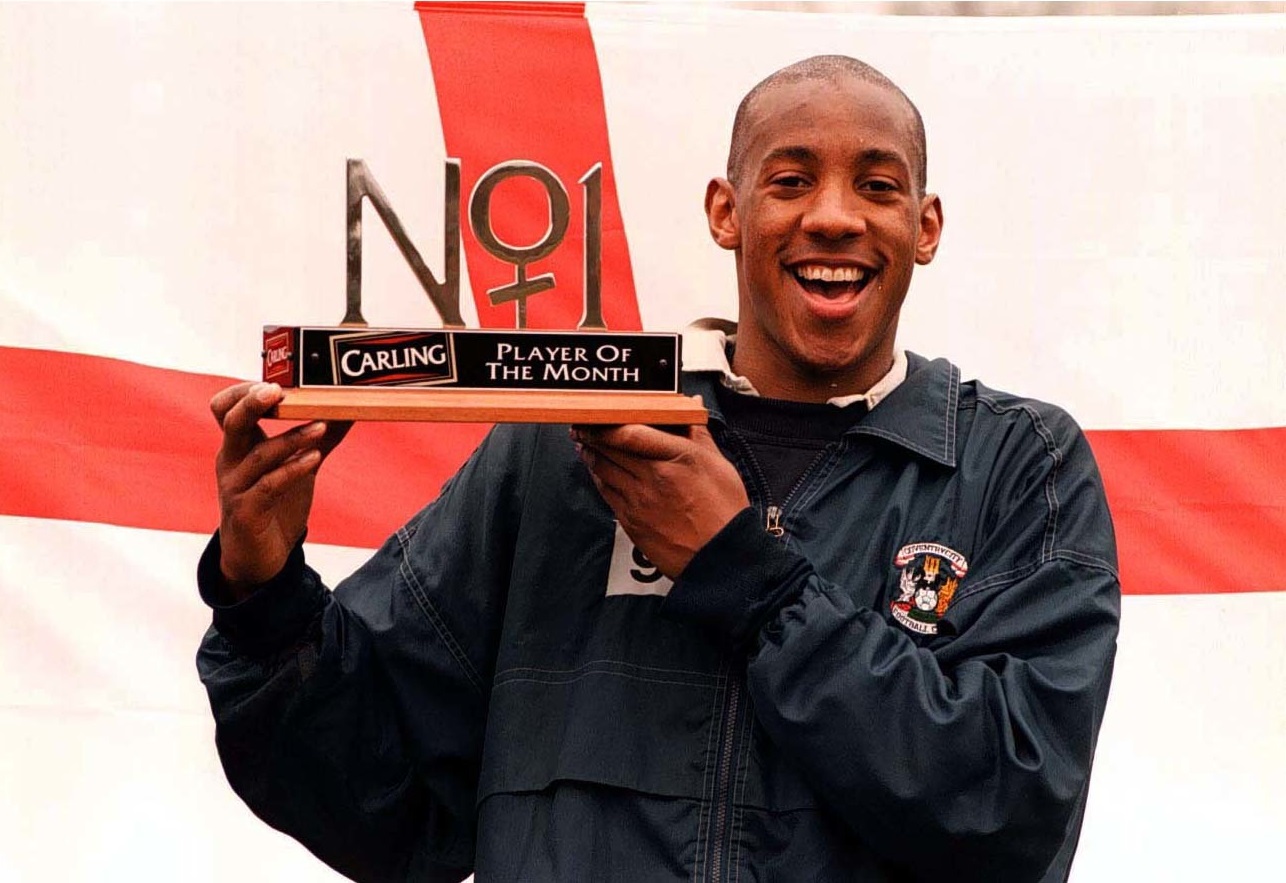 Glenn Hoddle first gave the Sky Blues man an international call up in February 1998. Dublin must have been in former Chelsea man Hoddle’s thoughts from the start of the season after scoring a hat-trick against Chelsea on the opening day of the campaign. Although Dion continued to play well for Gordon Strachan’s side there hadn’t been many goals, suspension and a spell at centre-half not helping, but a well-timed brace in a 5-1 win at Bolton at the end of January probably helped as did another goal – a match winning penalty against Sheffield Wednesday – four days before Dion’s international debut.

Lining up alongside Dublin at Wembley for a friendly with Chile was fellow debutant Michael Owen. Just past the hour mark Alan Shearer came off the bench to join them but England could find no way through the South American defence as two goals from Marcelo Salas, then of River Plate but later to star in Italian football, inflicted a 2-0 defeat. 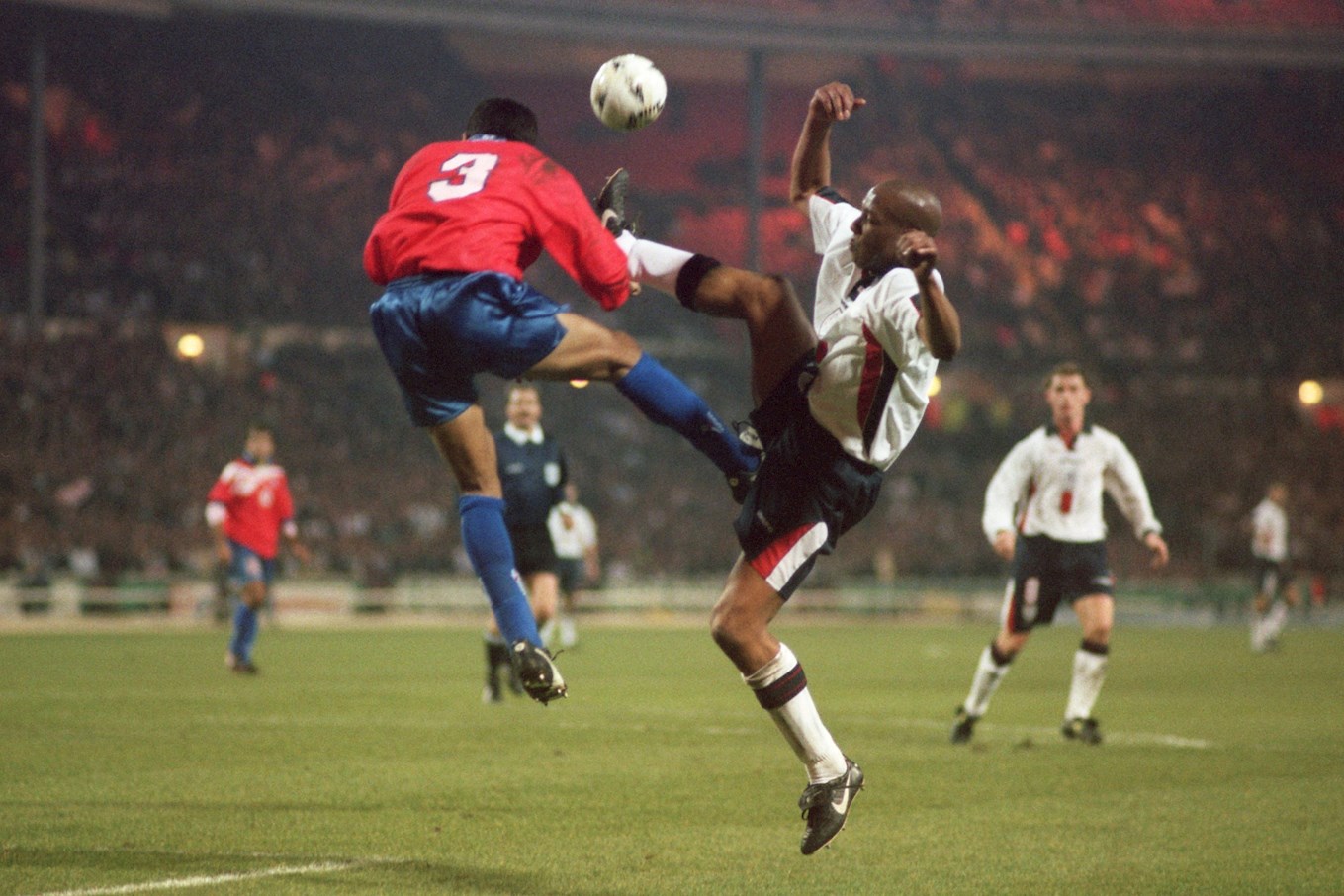 Dion didn’t keep his place in the team but he did carry on in the squad, being on the bench in England’s next two games in the following two months. As the season ended with Dion having been the country’s joint top scorer – along with Owen - with 23 goals (18 of those in the Premier League, a third of them penalties) he was called up once again. He sat and watched as England were held to a goalless draw by Saudi Arabia at Wembley but of all the strikers in all the world Dion got a start in Casablanca four days later. Morocco were beaten by a goal from Owen, his first international strike on his fourth appearance, having come off the bench early on for the injured Ian Wright. 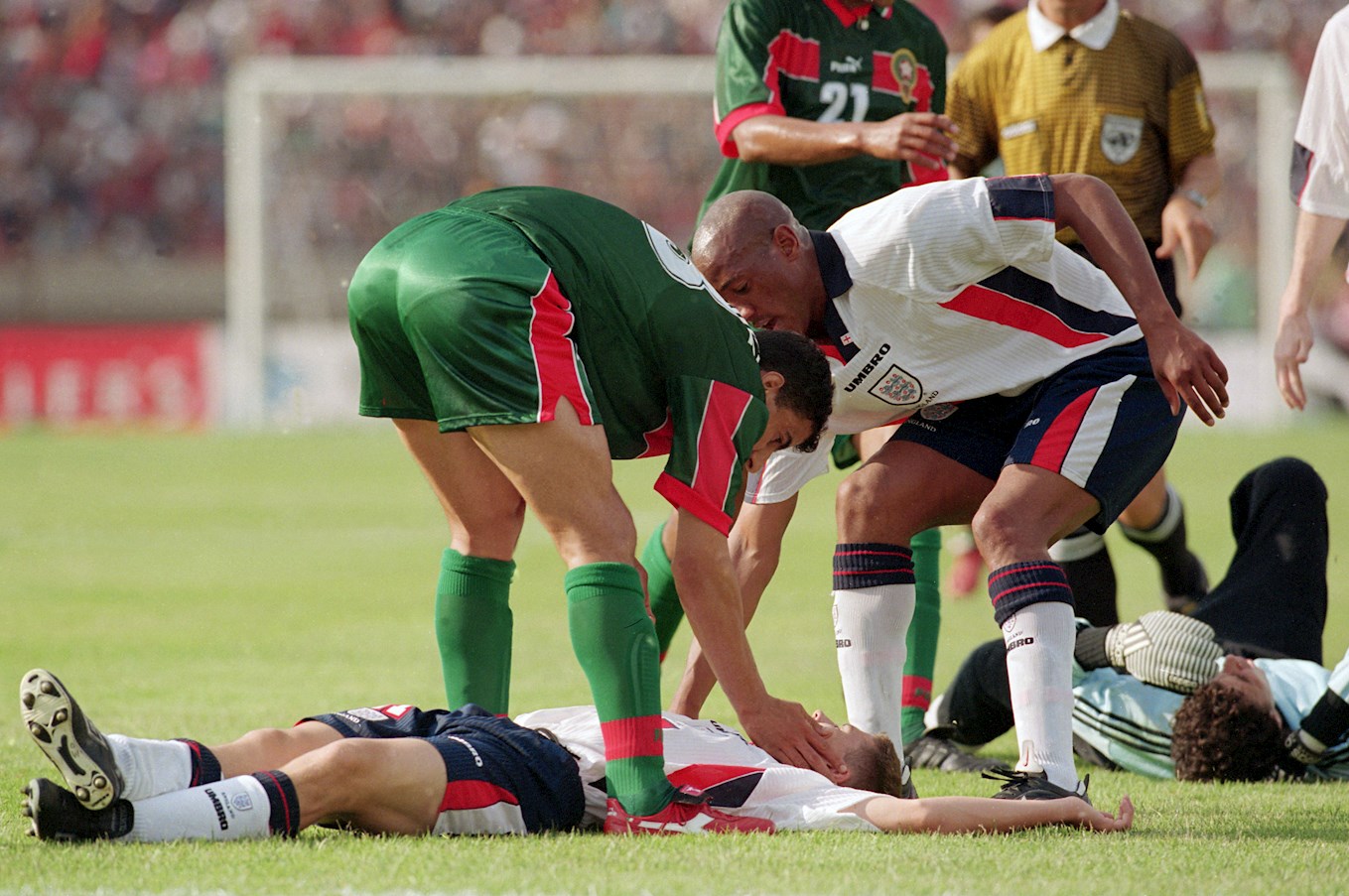 It was in that game that Dublin may have save Owen’s life – an aerial duel saw the youngster fall awkwardly and Dion had the speed of thought to put unconcious Owen on his side to prevent him swallowing his tongue.

Morocco were qualifiers for that season’s World Cup – indeed they had contested the possibility of being the host nation with France – and England had visited to warm up for a group game with Tunisia. Unfortunately for Dublin, having been named in England’s provisional squad of 30 two days after the end of the domestic season he didn’t make the final cut of 22 for the tournament as Hoddle went for Les Ferdinand in addition to Shearer, Sheringham and Owen.

Given how good a penalty taker Dion was, there was an irony in England going out on penalties in the second round when Paul Ince and David Batty missed as they went out to Argentina.

Dublin was called up again early the following season but had to remain patient as he waited for a fourth cap. In the squad but not selected for team or bench in a 2-1 defeat in Sweden and another Wembley goalless draw – this time to Bulgaria  -  before being an unused sub for an easy win in Luxembourg. 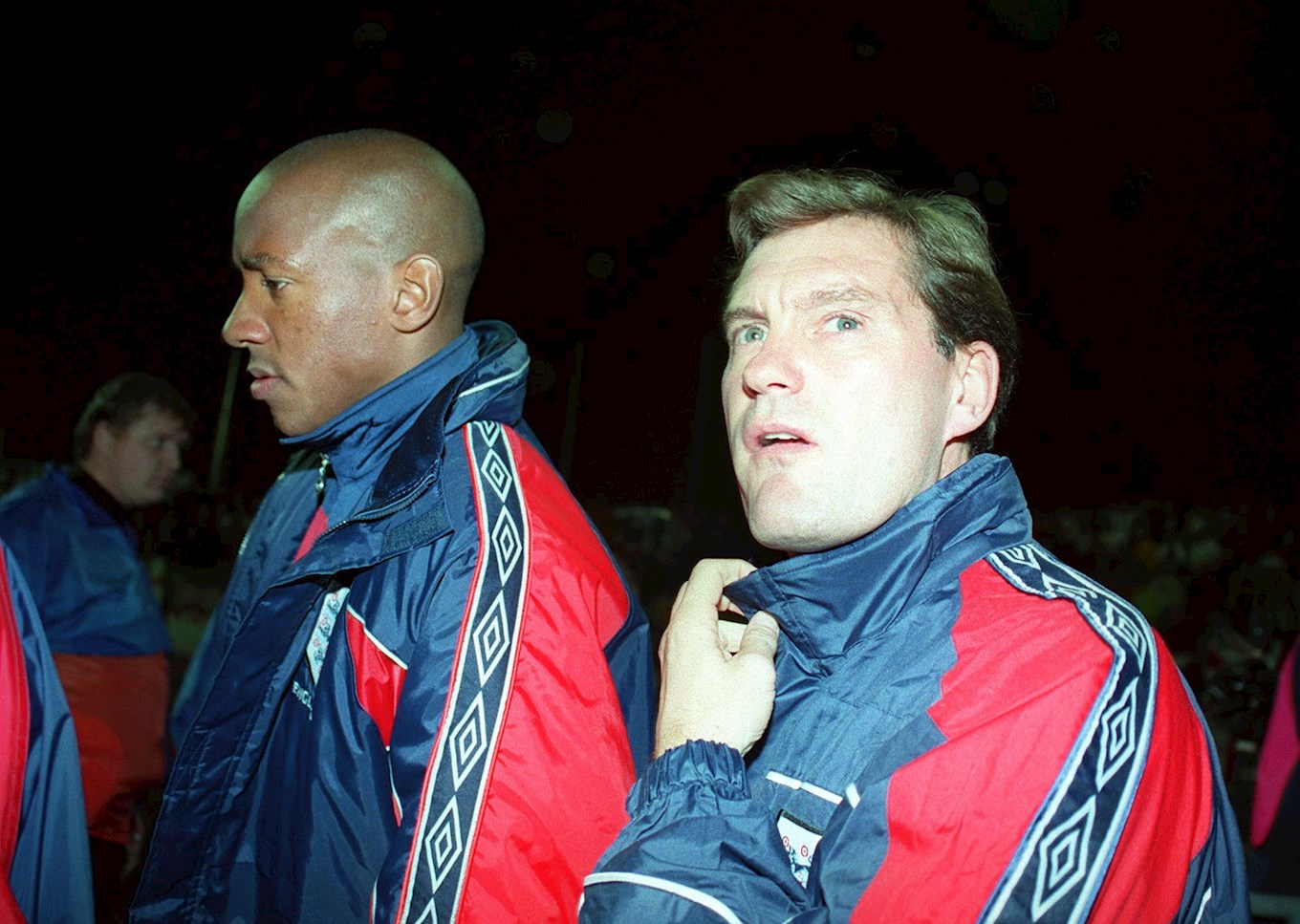 Dion came back from that international squad evidently frustrated after kicking his heels and duly scored in his next two games for the Sky Blues. He would start England’s next game the following month but by this time he was an Aston Villa player, after a controversial transfer to City’s rivals.

The big striker announced his arrival at Aston Villa in sparkling style – seven goals in this first three games as Villa topped the table. Two goals on debut against Spurs were followed by a hat-trick at Southampton and then another brace against Liverpool. In between the second and third of those games Dublin was part of the starting line-up for England at Wembley. Despite providing an assist for Paul Merson’s goal which wrapped up a 2-0 win against the Czech Republic that game proved to be Dion’s final cap.

Although he had scored just twice more for Villa – a brace against Arsenal before Christmas – he did get a call up for England’s next match against World Champions France in February 1999. By then Hoddle’s time as England manager was over with Howard Wilkinson in interim charge and for the fourth time in his 11 call-ups Dion had to deal with not even making the bench, let alone getting a game. Following the appointment of Kevin Keegan as England manager Dublin’s time as an international was over.

Five years later he was released by Villa having had a loan with Millwall in 2002 having notched 48 goals in 145 league games for the Villans. At this point Dion signed for his home town club – Leicester. By this time 35, the veteran found himself often employed as a centre-back rather than as a centre-forward.

After 18 months with the Foxes for whom he scored five times in 58 league games Dion accepted a new challenge and went north to Celtic. In Glasgow he re-united with Gordon Strachan in January 2006 until the end of the season. Dion got his one SPL goal in 11 games against Kilmarnock when he was joined on the score-sheet by John Hartson as Celtic strolled to the league title. 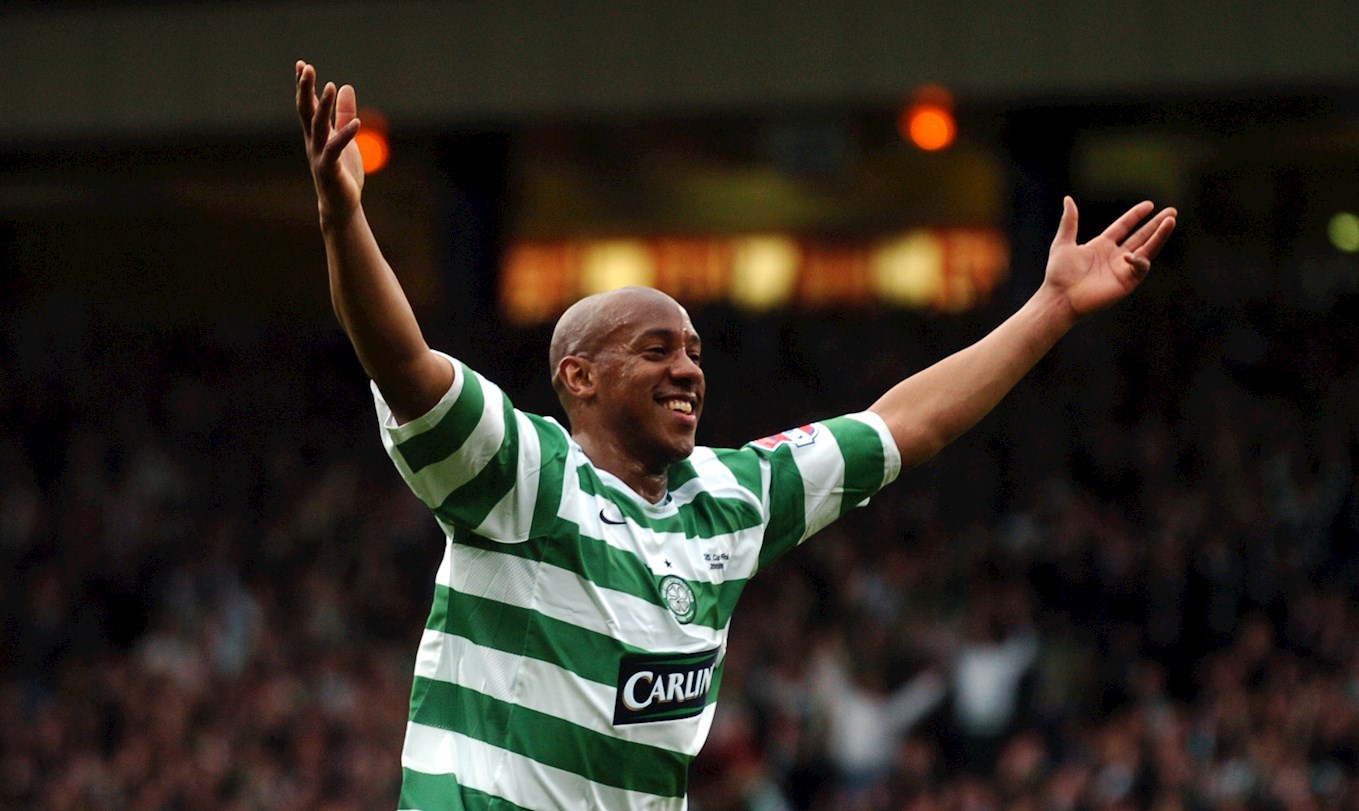 At this point it looked like a great time for Dion to retire, but as with all players of boundless enthusiasm his love of the game kept him going, and he had a final swan-song with Norwich where he played on for another two seasons before finally retiring in May 2008. It was unfinished business for Dion as Norwich had been his first professional club although he had left without playing a senior game as a Canary. As he bookended his career Dion scored a dozen times in 70 league games for the club, bringing his career tally to an impressive 183 league goals in 613 games.

Now 50, Dion was born on 22 April 1969 and was educated at Westcotes School in Leicester, beginning his football journey with a team called Wigston Fields, then Oakham United before signing for Norwich. He quickly moved on to Cambridge United where he made his senior breakthrough following a solitary appearance as a sub on loan with Barnet in the Conference. Four months before his 20th birthday Dion came off the bench at Wrexham. It was a game that Dublin’s side lost 3-1 and an early introduction to appreciating that every game matters. Come the end of the season his side missed out on the League Two play offs by one place – three points behind Wrexham.

After one more appearance as sub Dion made his first start against Rochdale in the last game of 1988 before grabbing the headlines four days later with a hat-trick in a 5-1 away win at local rivals Peterborough. Following that up with another goal in the next league game he signed off with two more late in the season. 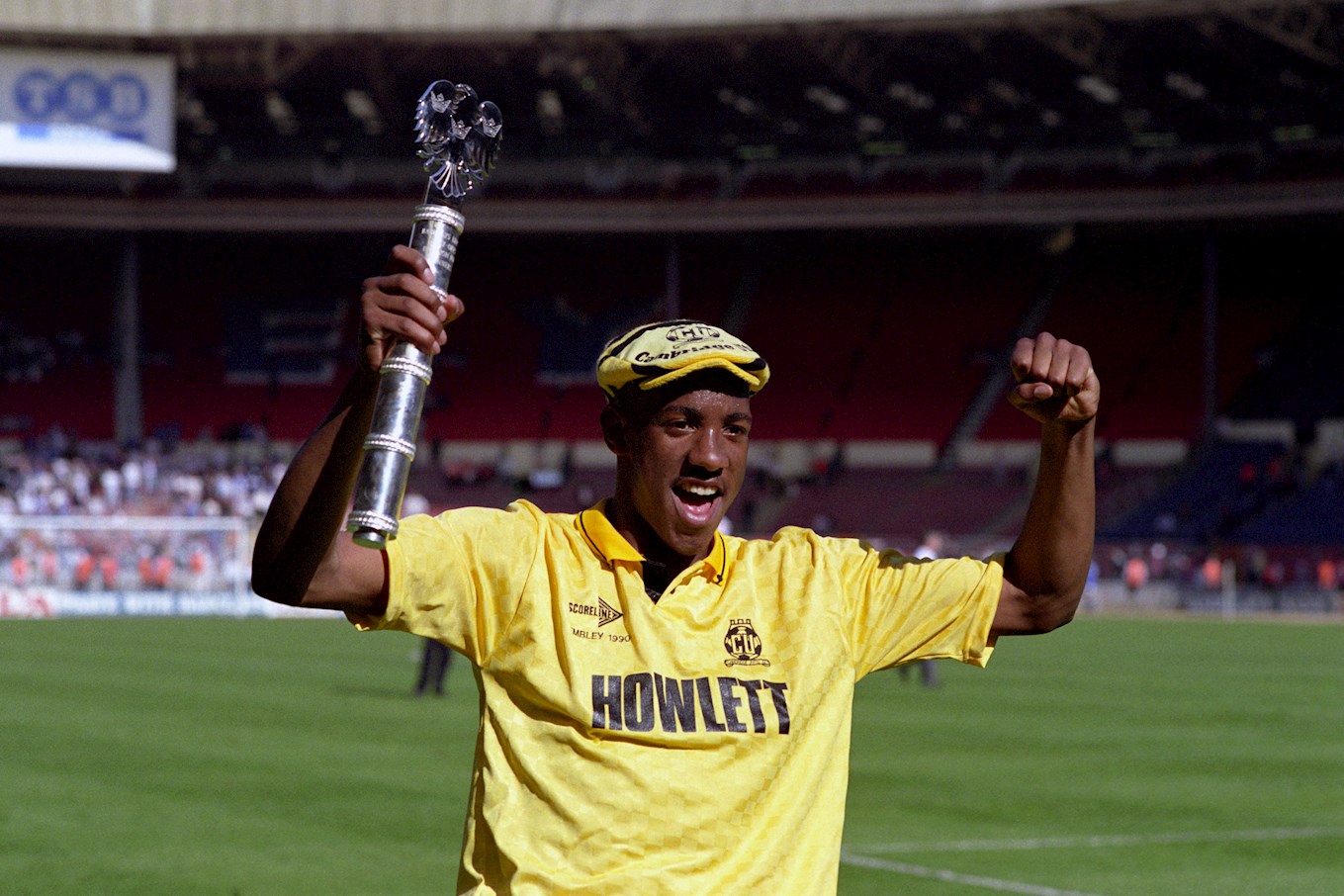 A first full season of 1989-90 brought Dion to the fore. Top-scoring with 21 goals for Cambridge, four of those came in the FA Cup as they reached the quarter-final and won the bottom tier play-off, with Dion scoring the only goal of the Wembley final against Chesterfield.

Plenty of scouts were watching the up and coming striker before eventually Manchester United invested £1m for him on the eve of the first ever Premier League season of 1992-93. Dublin left Cambridge with exactly one goal to his name for every three of the 156 league games he had scored in the city where he had graduated from his football education. 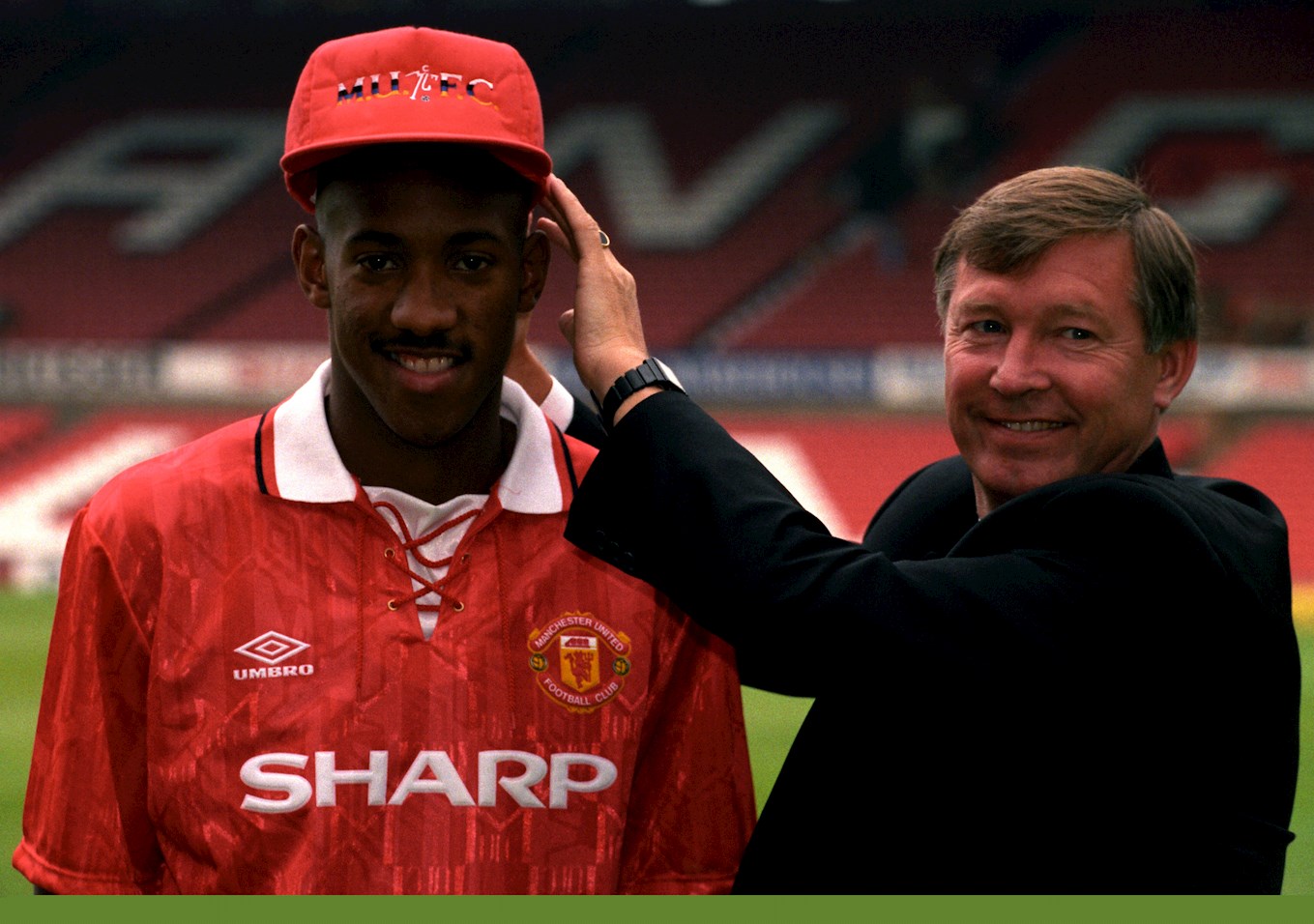 Rather than a degree at Cambridge however, doing well with the U’s was a bit like tackling your GCSE’s and then finding ‘A’ Levels were a bit tougher once you got to Manchester United. Having been a big fish in a small pond Dion was now a tiddler in an ocean at Old Trafford. His first game for United saw Brian Deane score twice for Sheffield United who won 2-1 at Bramall Lane before his home debut also ended in defeat, 3-0 to Everton. It wasn’t until his fourth appearance that Dion’s new club won – and even then it was a case of if you want a job doing do it yourself, as he hit the winner in a 1-0 victory at Southampton two minutes from time.

It was one of only three goals Dion scored in his two seasons at United. Opportunities at that level were few and far between as he only got on the pitch 17 times. The last of these was against Coventry in May 1994. He might have felt that playing for Manchester United may have projected him into the international arena. Four months after that valedictory appearance as a Red Devil, a club record fee of around £2m brought him to Coventry and on to that England debut. 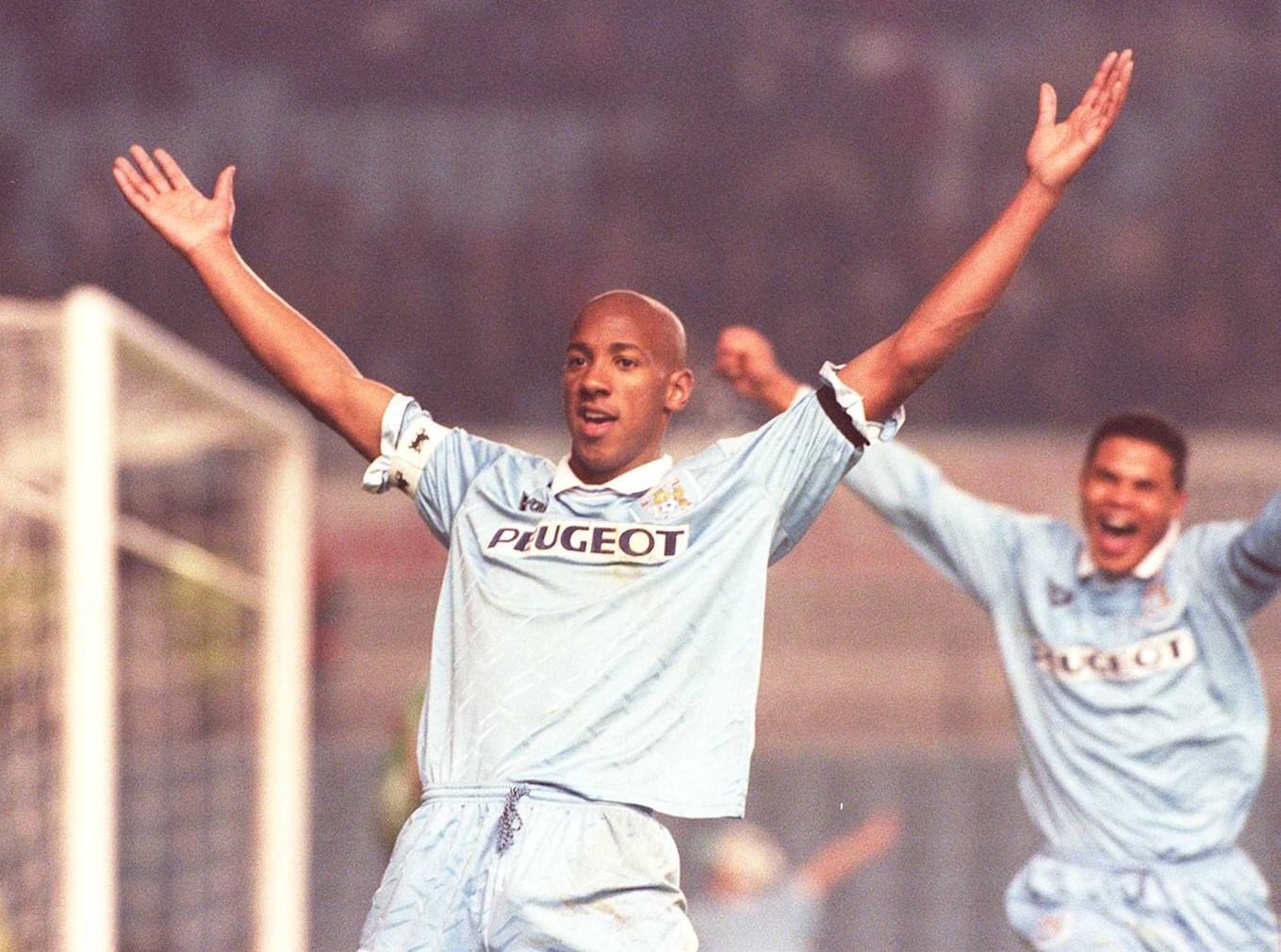