In this edition, Rob Mason profiles a man who took charge of both England and the Sky Blues - Joe Mercer...

‘Sky Blue Supremos’ tells the tales of the famous and not so famous managers, in this case a General Manager.

It was 29 years ago last month since Joe Mercer passed away at the age of exactly 76, his death falling on his 76th birthday. Joe had football in his genes, his dad, Joe senior, had played for Nottingham Forest and Tranmere Rovers either side of the First World War, a war Joe junior was born at the beginning of.

The younger Mercer would be General Manager at Coventry for three years in the early seventies, working as a mentor and senior figure alongside Gordon Milne. By this time Joe had a lifetime’s experience in football, a level of experience that made him so highly thought of that when England dispensed with the services of World Cup winning manager Sir Alf Ramsey it was Mercer they turned to. Joe took charge of the national side until the appointment of Leeds manager Don Revie a couple of months later, Mercer having supervised seven internationals in the meantime.

Until their modern day mega-success with their new found riches, one of Manchester City’s finest ever periods came in the late 1960s and early 70s. Champions in 1968, FA Cup winners in ’69 and European Cup Winners’ Cup winners a year later when they also won the League Cup, credit for City’s success increasingly was attributed to flamboyant coach Malcolm Allison. But it was Joe who was number one having taken over in 1965, leading City to promotion into the top flight in his first season, a year in which Coventry were edged into third place at a time when only the top two went up. Nonetheless Allison’s urge to be in charge led to Mercer leaving the club where a takeover battle raged, with Mercer having backed the old board while Allison courted the newcomers. 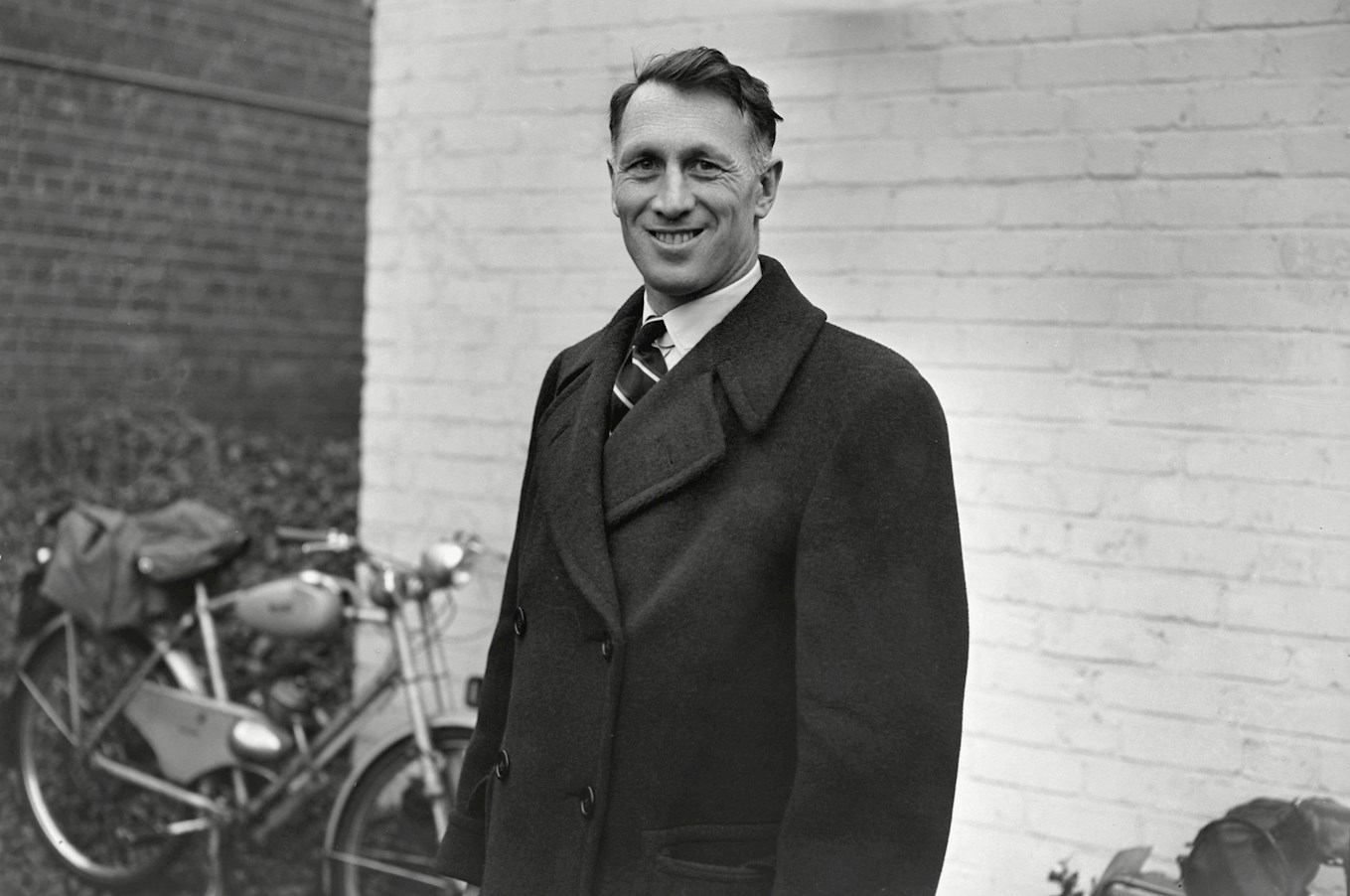 Manchester City’s loss was Coventry City’s gain. Chairman Derrick Robins was well aware of Mercer’s qualities and installed him at Highfield Road in a General Manager role, dove-tailing with 35-year old Gordon Milne who had been a player-manager of then non-league Wigan Athletic and had also run the England Youth team, but this was his big break in top level football. The idea was that Mercer was the old head offering advice and guidance to a young up and coming manager. Having seen how successful the Mercer-Allison axis had been in the light blue of Manchester hopes were high that some of this might rub off on the Sky Blues.

In terms of results at least, sadly that did not prove to be the case. Since being promoted under Hill in the season after England won the World Cup, Coventry had endured two years of narrow escapes under Noel Cantwell before an excellent sixth place and a creditable 10th.  Cantwell’s time had run its course by March 1972 and after acting manager Bob Dennison steered City to 18th position the Mercer-Milne duo was installed.

Without a win in their opening six games signs that the new managerial team were getting to grips with their task were seen when a great run of six wins and two draws propelled the team to ninth place. With goals in short supply this progress could not be maintained, the side coming to rest in 19th position. Even a run to the quarter final of the FA Cup failed to set pulses racing as City fell as soon as they met top-flight opposition.

There were decent cup runs in both competitions the following year where replays meant a dozen games were played. Despite this, the club didn’t get beyond a fifth round tie, interest in the League Cup ending in a replay back at Mercer’s old haunt of Maine Road, then the home of Manchester City.

Four days after the season ended in a moderately improved 16th place (following the sharing of six goals with another of Joe’s old clubs, Arsenal), Mercer succeeded Sir Alf Ramsey as England boss, albeit on an interim basis.

Known as ‘Genial Joe’ and one of the most popular figures in the game, Mercer managed England for seven matches, losing only one and winning three although only two were at Wembley. The defeat was a 2-0 loss to Scotland at Hampden. Victories over Wales and Northern Ireland enabled his team to share the old annual Home International Championship, following which there was an entertaining 2-2 home draw with an up and coming Argentina.

Completing Mercer’s sojourn in charge of the national side, a three game tour of Eastern Europe brought victory in Bulgaria between draws in East Germany and Yugoslavia.

East European opposition had also brought a close to Mercer’s full international career, at least in peace-time, Yugoslavia and Romania being the scenes of the last two of his five full caps as a player. Additionally, Joe represented his country a further 27 times during World War Two, scoring his only international goal on 19 February 1944. It was a goal worth waiting for, Joe joining greats such as Tommy Lawton and Raich Carter on the score-sheet as Scotland were hammered 6-2 before 80,000 at Wembley. A further representative honour came when he was selected to represent the Football League, then an honour close to a full cap.

Despite seven seasons being lost to the war, Mercer managed an incredible 477 peace-time league and cup appearances, split 184 for Everton before the war and 293 for Arsenal after it. Sadly, when Joe made his league debut for The Toffees at Wolves in September 1934, a month after his 20th birthday, his father was no longer alive to witness Joe junior’s success. Mercer senior had passed away when his son was just 12. Having served in the Great War, the future Coventry General Manager’s father had been wounded on the front line and captured in 1917, dying a decade later from causes attributed to the gas he had inhaled in the trenches.

While dad had been a centre half, son was a wing-half and an exceptionally good one. When Everton were league champions in 1938-39, just before World War Two, no-one made more appearances than Mercer’s 41 of a possible 42.

During the war, Mercer became a sergeant-major and played as a ‘Guest’ for Aldershot and Chester City, but also fell out with Everton over an injury he sustained playing for England. Reputedly he paid for career saving surgery himself – this was before the creation of the NHS – so hardly surprisingly after the war Joe no longer cared to play for Everton and subsequently signed for Arsenal.

The Gunners allowed Merseysider Mercer to remain living at home and train at Anfield. Nonetheless Joe became captain of The Gunners with whom he won further league titles in 1948 and 1953, playing in two FA Cup finals in between, earning a winner’s medal in 1950 when he was Footballer of the Year. A player of great spirit, Mercer was approaching his 40th birthday when a broken leg in a game against Liverpool ended his playing days.

Playing in the era of the maximum wage Mercer combined his days as a young player with Everton with running a grocery business in Wallesey and having hung up his boots he returned to his roots by running a wholesale grocery on The Wirral. Knowing Joe knew his onions (sorry!) Sheffield United appointed him to his first managerial role at Bramall Lane on 18 August 1955, two days before the opening day of the season which resulted in a 4-2 defeat at Newcastle.

As is often the case with players who have been part of trophy winning teams, coming to terms with players of lesser ability can be difficult, as Mercer found. His first season resulted in relegation but there was the joy of The Blades biggest win of the season being back at Goodison Park where Joe’s side triumphed 4-1.

Mercer’s men didn’t trouble the promotion places in his remaining time at the Lane, finishes of seventh and sixth, when only two went up, leaving United amongst the also-rans. However, after hitting a good run where his last two home games were won 6-1 and 5-0 Joe gave himself a Christmas present in 1958 by leaving The Blades on Christmas Eve to take over at Aston Villa.

It was a step up back to the top flight for Mercer but as in his initial campaign as a manager in Sheffield, it resulted in relegation. While Joe focussed on developing young players to the point that his side became nick-named Mercer’s Minors one player he didn’t fancy and released at the end of the season was future Coventry manager Ron Atkinson.

Villa kept faith with Mercer despite him having two relegations and two failures to impact on the promotion race as his CV thus far. Their faith in their manager was repaid as Villa stormed to the second division title, an 11-1 win over Charlton being a Villa Park record.

Back in the big-time Mercer took his side to a healthy ninth place and won a first trophy by winning the first ever League Cup. The final was actually played at the start of the following 1961-62 season. Two seasons later they would be finalists again as they settled in mid-table under Joe, but after five and a half years in charge he left in the summer of 1964 after Villa flirted with the drop. They had won just one of their last 10 games while more worryingly Mercer suffered a stroke, probably through the strain of over-work.

In contrast, having taken over at Manchester City a year later, after 12 months of recovery, there was only a single defeat in his first 15 games as Mercer took City to the second division title. The trophy signalled a golden era as Joe built the great team of Franny Lee, Mike Summerbee and especially Colin Bell who Mercer blooded in his first season, the man who would become known as Nijinsky scoring the goal that clinched promotion.

Bell started all seven of Mercer’s matches as interim manager of England almost a decade later. When Joe’s reign came to a close he focussed once again on club football within the management structure at Coventry City, becoming a director of the club in April 1975. With Gordon Milne – who at one point had been rumoured to be linking up with Mercer with England as well as Coventry - remaining in post until Mercer resigned Joe did not find himself having a hand in appointing a Sky Blue Supremo during his spell on the board.

While with Coventry Mercer was awarded the OBE after a lifetime’s service to football as a fine player, manager and administrator. Inducted into the National Football Museum Hall of Fame for his contribution to the game as a manager, Mercer has suites named in his honour at both Everton and Manchester City while a road leading to the home of the current Premier League champions is named Joe Mercer Way.

Joe Mercer’s time at Coventry was far from his most successful time in football but his role in the history of the Sky Blues illustrates the calibre of the people entrusted with the stewardship of the club, in Joe’s case so good Coventry had to ‘loan’ him to England.