We take a look back at the head-to-head record between the Sky Blues and the weekend's opponents, Peterborough United.

Nearly half of the 23 meetings between the two clubs have ended with at least four goals, with the Sky Blues coming out on top in the majority.

The Sky Blues boast an impressive record over the current league leaders, winning 14 of the 23 meetings between the clubs compared to five victories for the Posh.

The two clubs have met in a variety of competitions including the Championship, the FA Cup and the League Cup, as well the first 6 matchups between the two coming in the old Division Three.

After winning the inaugural fixture away at Highfield Road in 1961, Peterborough have subsequently travelled to faced Coventry a further 11 times without coming away with a single victory.

Although Peterborough’s record is better on their own patch, Coventry go into the fixture with a significantly better record than their opponents over the years and on the back of a win in Cambridgeshire last time out.

Coventry travelled to Peterborough in the March of last season with a late play off push in sights. Their opponents sat just above them in the table and also shared similar play-off ambitions, despite a stuttering second half of the season.

City arrived in good form and played with a swagger in the first half, coming close to taking the lead after Brandon Mason’s cross inadvertently rattled the crossbar from 40 yards.

The Sky Blues deservedly took the lead on the stroke of half time after Forward Amadou Bakakyoko finished off a Luke Thomas through ball to give City the advantage.

The second half started in the same vein, and Bright Enobakhare capitalised on a defensive error to finish and put City firmly in the driving seat.

City looked to be cruising to victory, until a 98th minute deflected effort from Louis Reed set up a nervous finish for the travelling Sky Blues fans. City held on despite a late flurry from the hosts and moved above their opponents into 7th and just one point adrift of the play-off places with 8 games to play.

You have to go back to 1962 and just the third meeting between the two sides to find Coventry’s biggest win over their opponents.

A 3-0 victory from the Sly Blues away from home represented another impressive result in a season where the club put the foundations in place for a Championship winning campaign next time out.

Goals on the day came from club legend Mick Kearns and a brace from prolific forward Terry Bly. Kearns boasts the esteemed honour of being one of the few players to represent the Sky Blues in five different divisions of the football pyramid and is the only player to make 350+ for Coventry City whilst remaining a one club man. 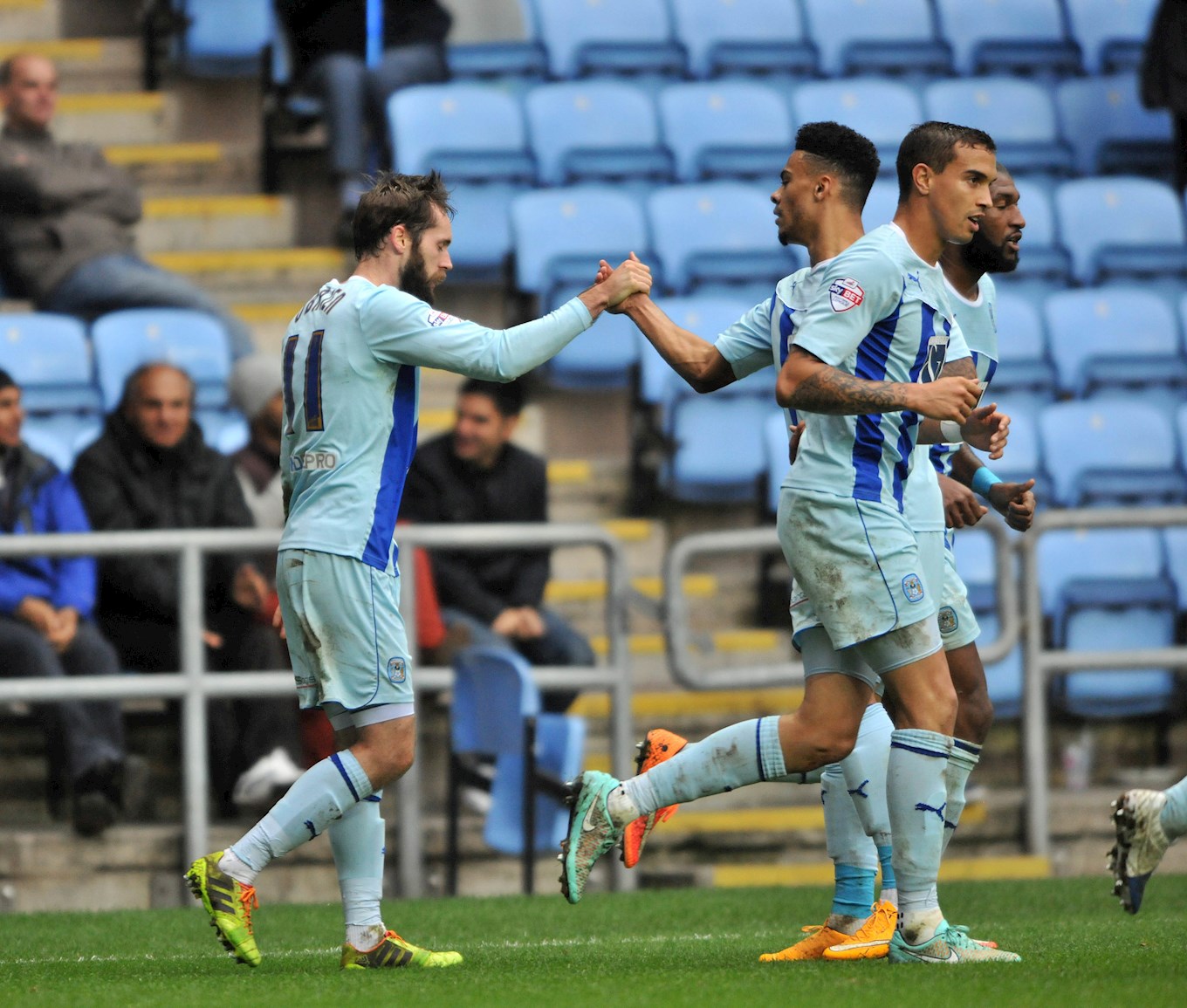 City went in at half time 2-0 down at the Ricoh Arena during a league clash between the two in the 2014/2015 season. Off the back eight successive games without a win, the crowd at the Ricoh feared the worst as high-flying Posh dominated the proceedings.

The home side returned for the second half rejuvenated and with a point to prove, and young full back Ryan Haynes halved the arrears right after the break.

The pressure continued and Jim O’Brien crashed home to get the Sky Blues on terms with half an hour to play. City were in the ascendency, and two minutes later fit again frontman Frank Nouble finished off an impressive solo run to give City a priceless goal which knocked the stuffing out of the opposition.

The Sky Blues held on for a priceless win and maintained their good record of results against their shell-shocked opponents.