The Sky Blues face Sunderland this weekend - and the likes of Chris Coleman, Eric Black (Caretaker at Sunderland) and Peter Reid have managed both sides, plus Terry Butcher - who was Player/Manager at both Clubs and who is profiled by Rob Mason below...

A terrific defender on the international stage where he won 77 caps, Butcher’s managerial career - which began at Coventry - was nowhere near as successful as his playing days.

The only man to captain England in a more important game was not a great success as a manager either. After lifting the Jules Rimet trophy in 1966 when Butcher was just seven, Bobby Moore went on to manage Oxford City (not United) and Southend United, only to be relegated with the Roots Hall outfit.

Butcher fared better in the managerial game than Moore but only a promotion with Inverness Caledonian Thistle stands as a triumph from a managerial career spread over a quarter of a century.

As a player Terry had been a giant in more ways than one with Ipswich Town, Glasgow Rangers and England. Schooled by Sir Bobby Robson at Portman Road, Butcher won the UEFA Cup in the early eighties when fixture congestion ruined their chances of winning the league. Those league title medals cane Terry’s way when he moved north of the border to join Rangers. Three championships were won at Ibrox along with a couple of Scottish League Cup medals, so when Butcher came to Coventry it was seen as something of a coup. 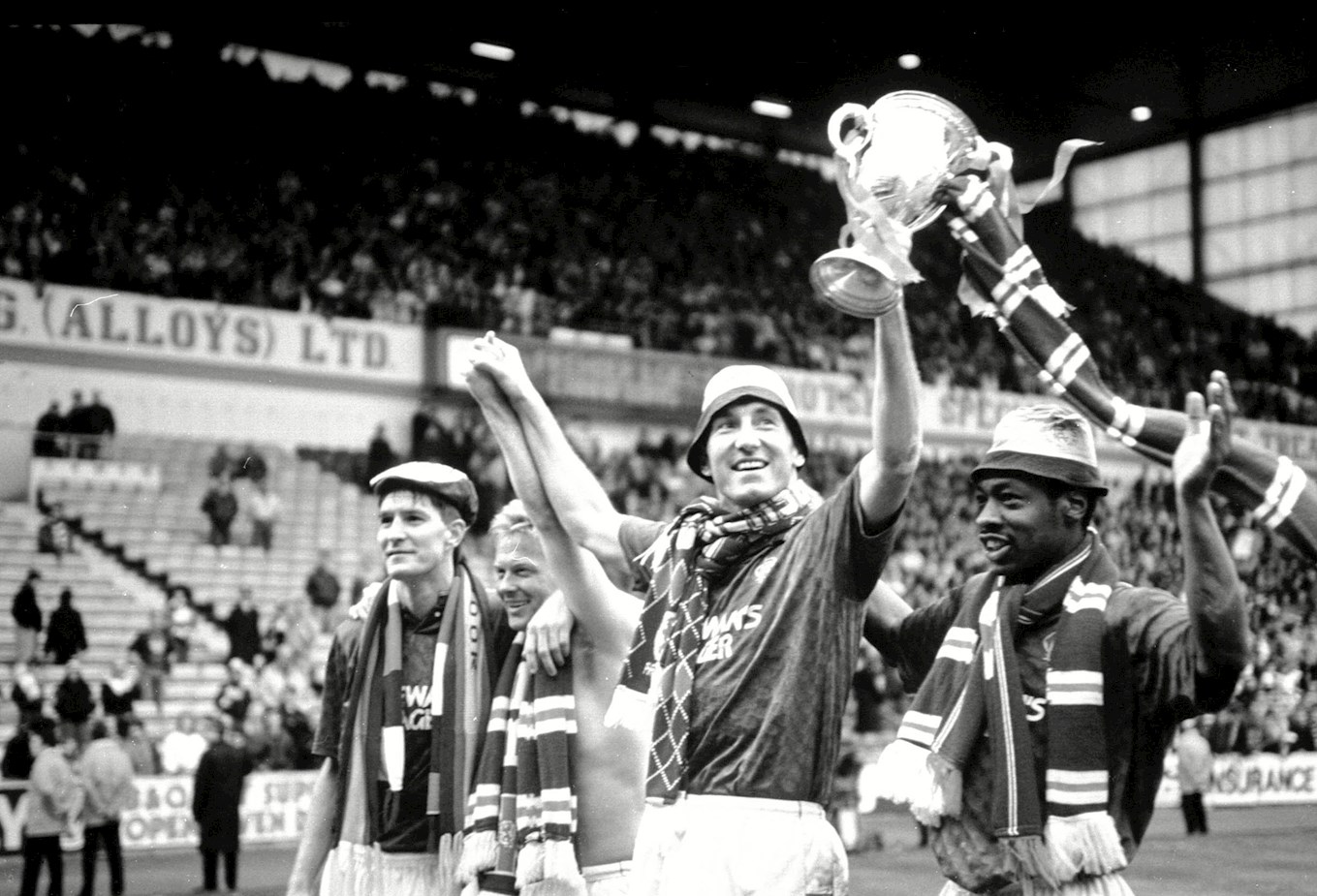 A fee reported to be worth up to £450,000 (substantial for a defender over 30 but a 10th of the record fee commanded when his international team mate Chris Waddle moved from Spurs to Marseille a year earlier) brought Terry to Highfield Road as player-manager on November 15th 1990. Succeeding John Sillett, Butcher’s opening game saw him feature in a 0-1 home defeat at the hands of reigning champions Liverpool.

A week later a home draw with Leeds brought City’s first goal other than from a penalty in seven league games. Kevin Gallacher’s strike sparked a goal-fest as League Cup holders Forest were then beaten 5-4 in a League Cup thriller featuring a Gallacher hat-trick.

While Gallacher laid claim to the match ball, as centre half Butcher saw Forest striker Nigel Clough also score a hat-trick, in his case within the space of eight minutes! Having played the first four games of his reign as player-manager, Butcher would only play a further four times for the club, preferring to focus on the managerial side rather than attempting to combine both roles.

The manager did pick himself for two games between Christmas and New Year. Both were solid home wins based on clean sheets he helped to achieve but fans would only see him play one more league match- in a home win over Villa. 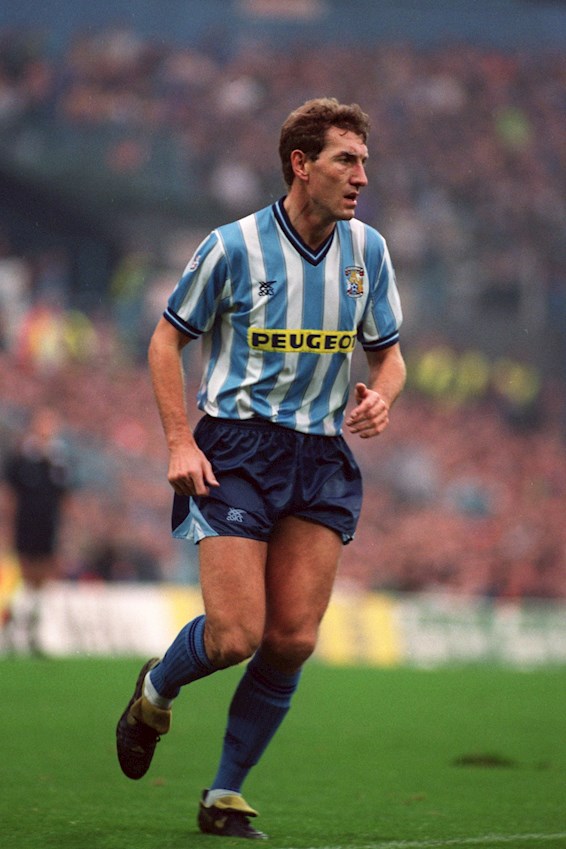 Despite those wins when he played, Butcher oversaw a season of struggle although the Sky Blues were never in real danger of going down. They finished 10 points clear of relegation but were fifth bottom, at a time when just two went down. Nonetheless the campaign ended badly with just one win in the last six games- and six goals conceded at Arsenal on the final day.

What was meant to be Butcher’s first full season of 1991-92 started well. An early 5-0 win over Luton was soon backed up with revenge for the Highbury thrashing as defending champions Arsenal were beaten on their own patch. Peter Ndlovu got the winner that day and he was the man with the goal-den touch again when Villa were beaten at the end of September with the Sky Blues sitting pretty in sixth place. Ndolvu was an all gold signing by Terry for a bargain £10,000 around the time Cyrille Regis was allowed to leave the club.

While the win over Villa in September 1991 was a high-point for Butcher, the visit of the same side the following month brought a red card in what would be his final playing appearance for the club- in a low key Full Members’ Cup defeat. 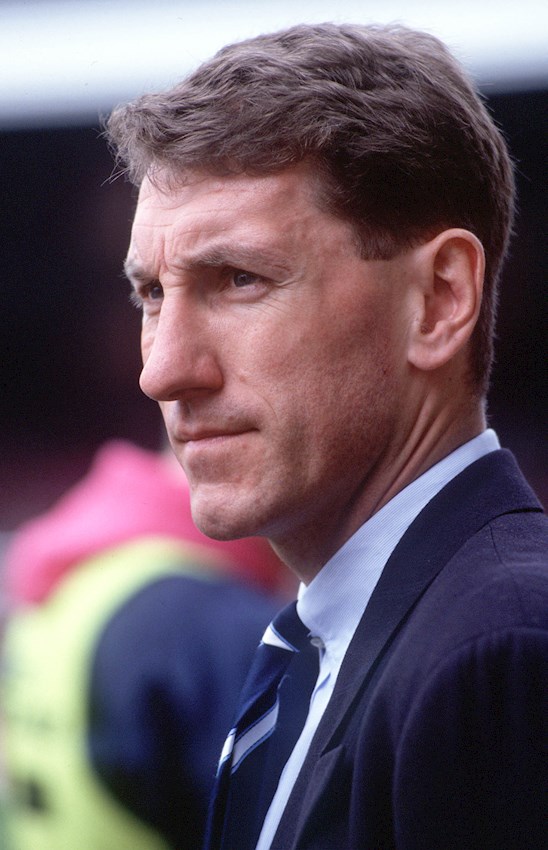 Two and a half months later Butcher got the chop when he was sacked on January 6th 1992 after just over a year in charge. The end came two days after a home FA Cup draw with Cambridge United which extended a dismal run to two wins from 12. However, apparently the dismissal wasn’t solely down to results.

The club’s finances weren’t as good as they might be. Terry’s assistant Mick Mills; his old Ipswich and England Colleague, along with Brian Eastick, had fallen by the financial wayside but Butcher was still commanding a salary commensurate with his acquisition as player-manager when he was managing but not playing- despite having only just turned 34 a week before his dismissal. Although the Sky Blues rarely hit the heights during Terry’s time his record showed he won exactly one third of his 60 games in charge but lost six more than he won. It was not disastrous for a manager negotiating his first full season- if not being prepared to negotiate his salary at a time when some felt he was being paid for two roles but only carrying out one. So it was with that Terry Butcher’s first job as manager came to an end, assistant Don Howe taking over in the hot seat.

Ironically Butcher subsequently dusted down his boots and continued his playing career. There were brief spells with Halesowen Town, where he also coached, and Sheffield Wednesday reserves (courtesy of Owls boss Trevor Francis, another former international team-mate).

By the start of the following 1992-1993 season Butcher had signed for FA Cup finalists Sunderland in the division below City. Having played just eight times in total for City, Butcher speared in 42 games in his first season at Sunderland- all but one of them were starts. 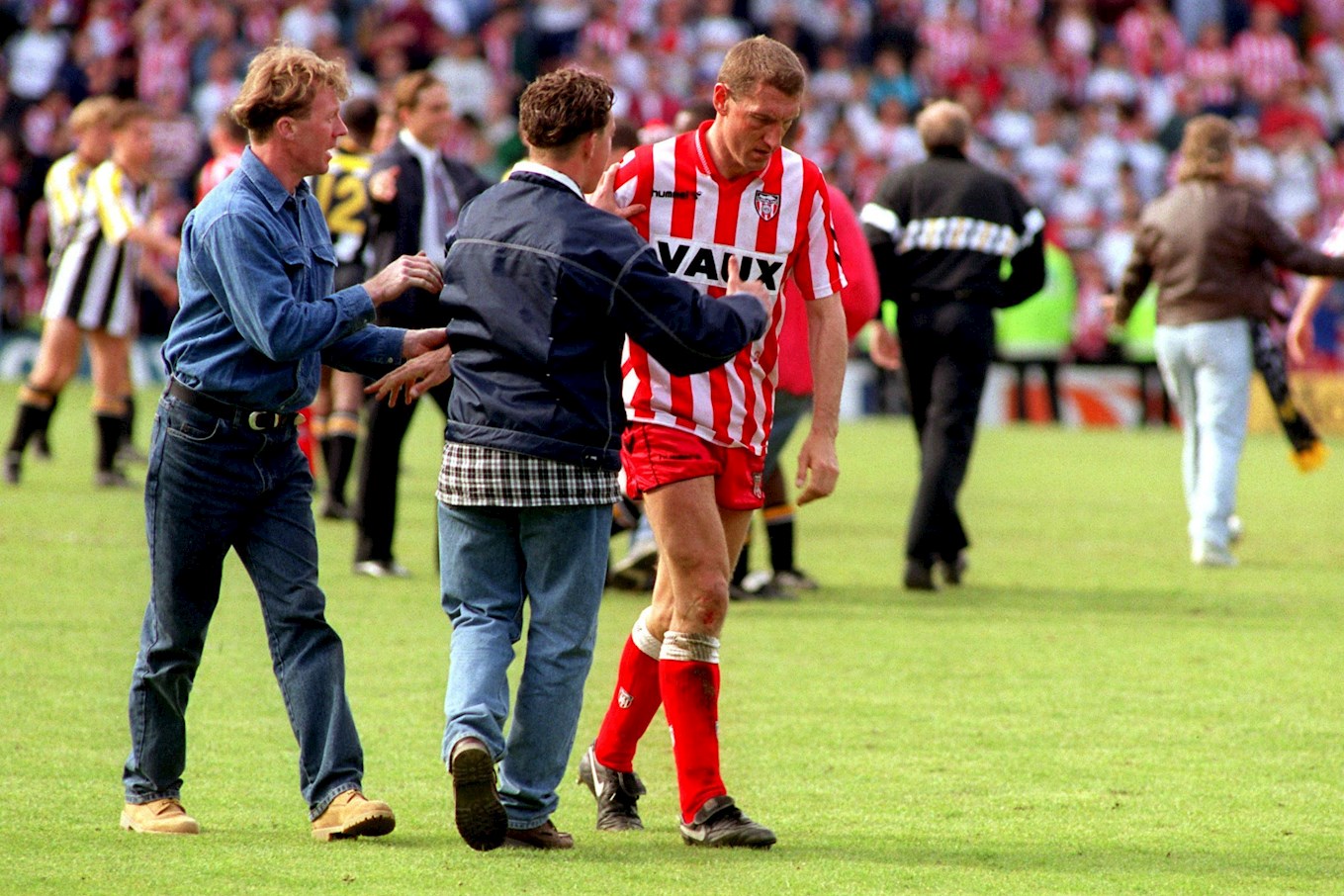 By the end of that campaign Terry was back in the player-manager role having succeeded the sacked Malcolm Crosby. The Wearsiders only just avoided relegation by the skin of their teeth but gave Butcher substantial funds during the summer. Things didn’t augur well when several of his signings were injured in a car crash a few days before the opening game of the season which brought a club record first day defeat at Derby, and by the end of the calendar year Butcher had been sacked once again.

Having experienced success after success as a player, two dismissals as a manager was evidently chastening. Returning to Scotland where he’d been a hero with Rangers, Terry moved into business as a hotelier.

There followed a nine-year hiatus from the game until in October 2001 he re-emerged as assistant at Motherwell to Eric Black. Ironically it was ‘Black’s move to become assistant manager at Coventry that led to Butcher’s return to management in 2002. Terry did well, staying with Motherwell until 2006 and taking them to the 2005 Scottish Cup final, although a 5-1 defeat was suffered at the hands of his old club Rangers.

In May 2006 Singapore born Terry (His dad was stationed there in the Navy) was tempted to Australia to take over at Sydney. It was a short-lived venture as by the following February he had suffered the sack once more. In fact Butcher had more sacks than a potato merchant, the next one coming before the end of the same calendar year at Brentford where he had taken over during the summer, following a short spell as Partick Thistle. 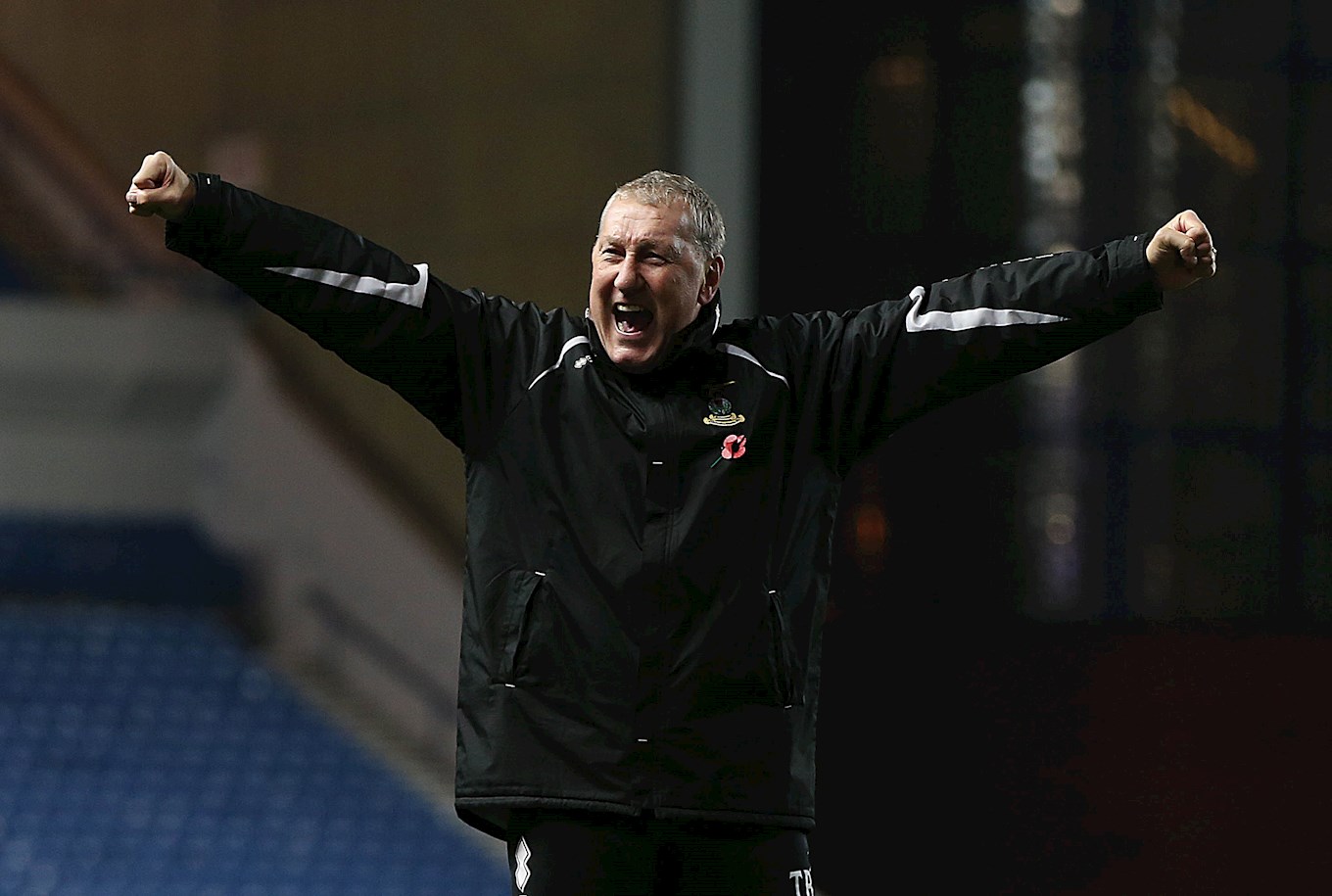 To Butcher’s credit and indicative of the fighting spirit he’d shown as a player, he didn’t give up, His next appointment was to prove his most successful. A four-year spell in the north of Scotland with Inverness Caledonian Thistle from 2009 to 2013 included promotion to the SPL at the end of his first full season after they had gone down under him.

Having suffered from appearing to do one job rather than two while at Coventry, by now Terry was combining club management with being assistant manager of the Scotland national side. Working with his old Ipswich colleague George Burley, formed England skipper Butcher assisted the Scots from 2008 until almost the end of 2009.

Following his success with Inverness Butcher’s next post was in the capital with Hibs. The Easter Road outfit had to compensate Inverness for Terry’s appointment in November 2013 but it proved to be a disappointing time as the Edinburgh club suffered relegation. 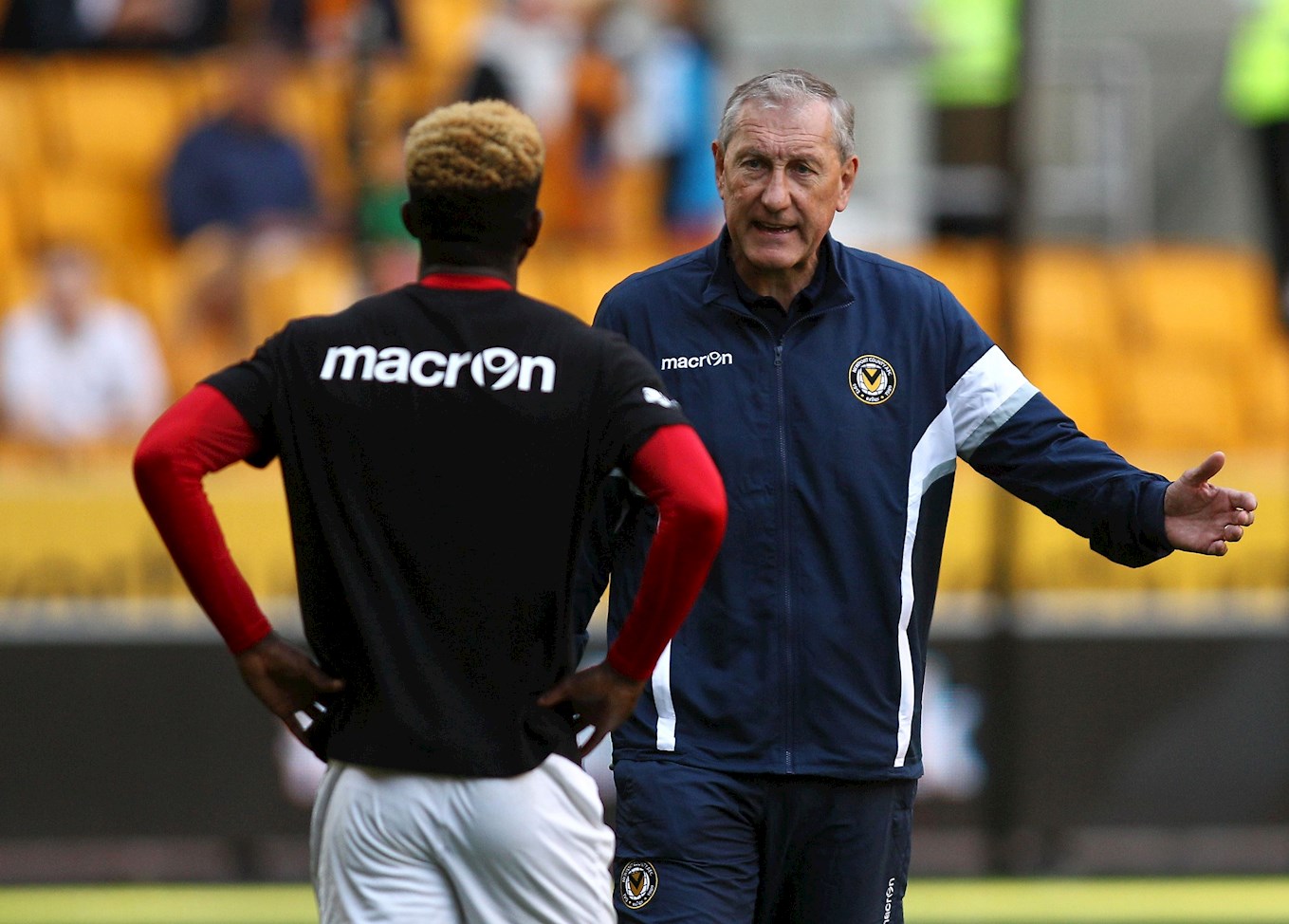 And so to Newport County, who appointed Butcher for the 2015-16 campaign. A win at Carlisle was the solitary success in a dozen games before he once again was sacked. Terry’s win percentage in South Wales of just over 8% was by far the worst of his career, a figure of 41% at Inverness being the best.

Fond of submitting his programme notes hand written in block capitals, and known to sometimes tell his players they were commandoes about to go into battle, Terry Butcher had his moments in management but not especially with Coventry. History will regard him as a terrific defender, but like that other great England World Cup captain his greatest moments were undoubtedly with his boots on.