‘Big Ron’ Atkinson managed the Sky Blues from 15 February 1995 until 5 November 1996 when he ‘stepped upstairs’ to become Director of Football. A year later he moved back into team management with Sheffield Wednesday. By the time he moved from Highfield Road to Hillsborough he had long become one of the most recognisable and ebullient managers in the game, but at the opposite end of his managerial career he had enjoyed great success in charge of this evening’s visitors Cambridge United.

Big Ron is one of 25 managers honoured by the League Managers’ Association for taking charge of over 1000 games, and the only one to have managed Coventry. In total Atkinson managed in 1,078 matches, winning 156 more than he lost and achieving an impressive win ratio of 43%.  While he exceeded that with Cambridge where he passed his first league test with flying colours and a win ratio of 46.6% over 146 matches, at Coventry he produced a win ratio of just 25.7%.  City were the only club on his CV where he lost more games than he won. Just 19 wins were recorded in his 74 games with 27 defeats and 28 draws.

Coventry’s vice-chairman at the time of Big Ron’s appointment, Mike McGinnity, had been a West Brom director when Atkinson was working wonders at The Hawthorns and with Atkinson living in Worcestershire, the attraction of coming to Coventry worked on several levels. 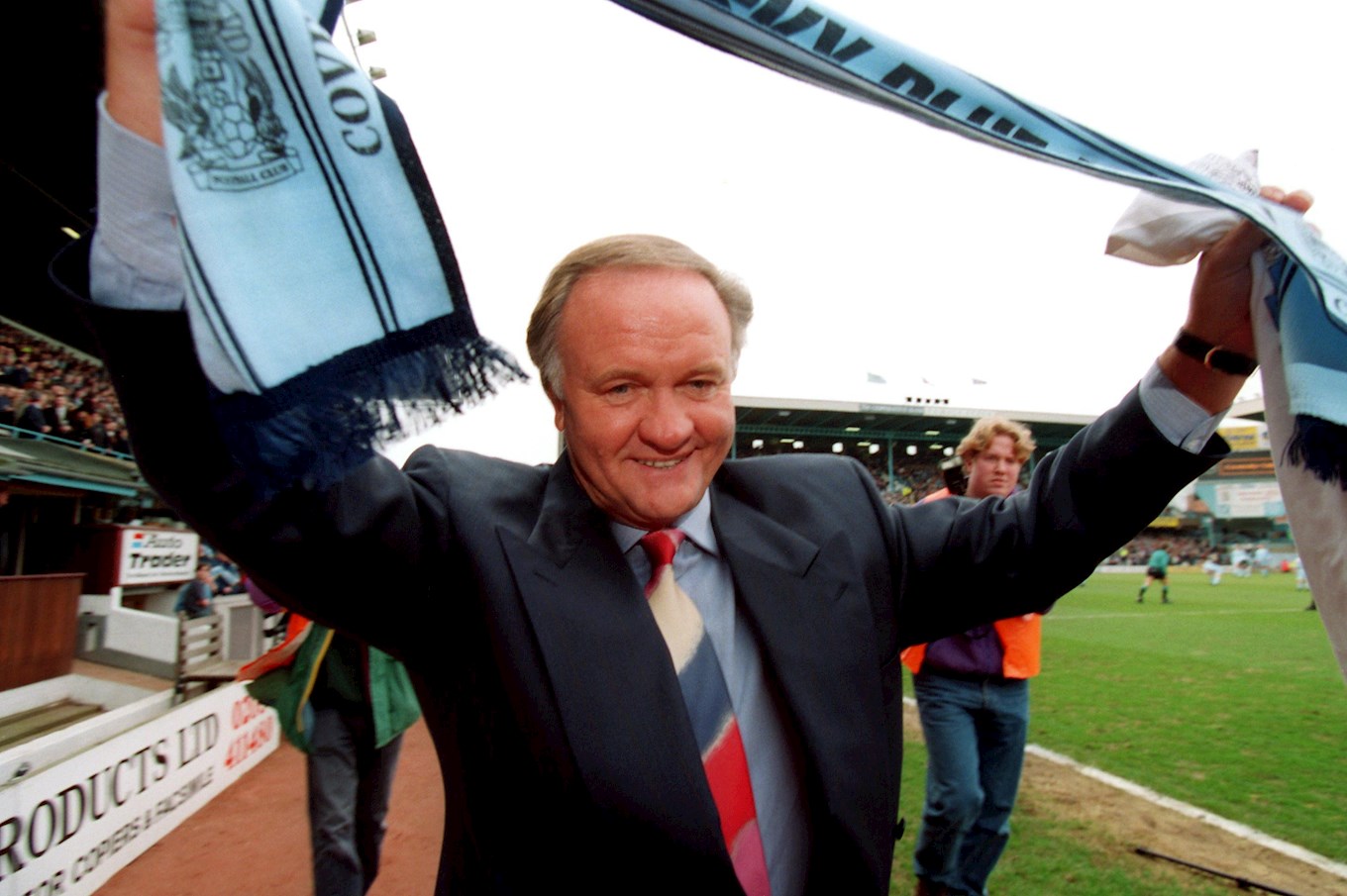 Starting with back to back home wins over West Ham and Leicester, three draws followed before a Peter Ndlovu hat-trick produced a sensational win at Liverpool as Big Ron arrived in a blaze of glory. The new manager ‘bounce’ couldn’t last of course and there were five defeats in the next six games before a couple of decent results steered City to 16th place. This was five points clear of the drop zone in a season when four went down as the table was re-structured.

16th place was the final resting place in Atkinson’s solitary full season in charge at Highfield Road in 1995-96. It was a season of struggle with just eight league victories and relegation avoided only on goal difference. Victory over Manchester City in the opening home game provided hope but there wouldn’t be another win until December. It was worth the wait as reigning champions Blackburn were battered 5-0, although that win over City was crucial as in the final analysis City went down on the same points as Coventry. 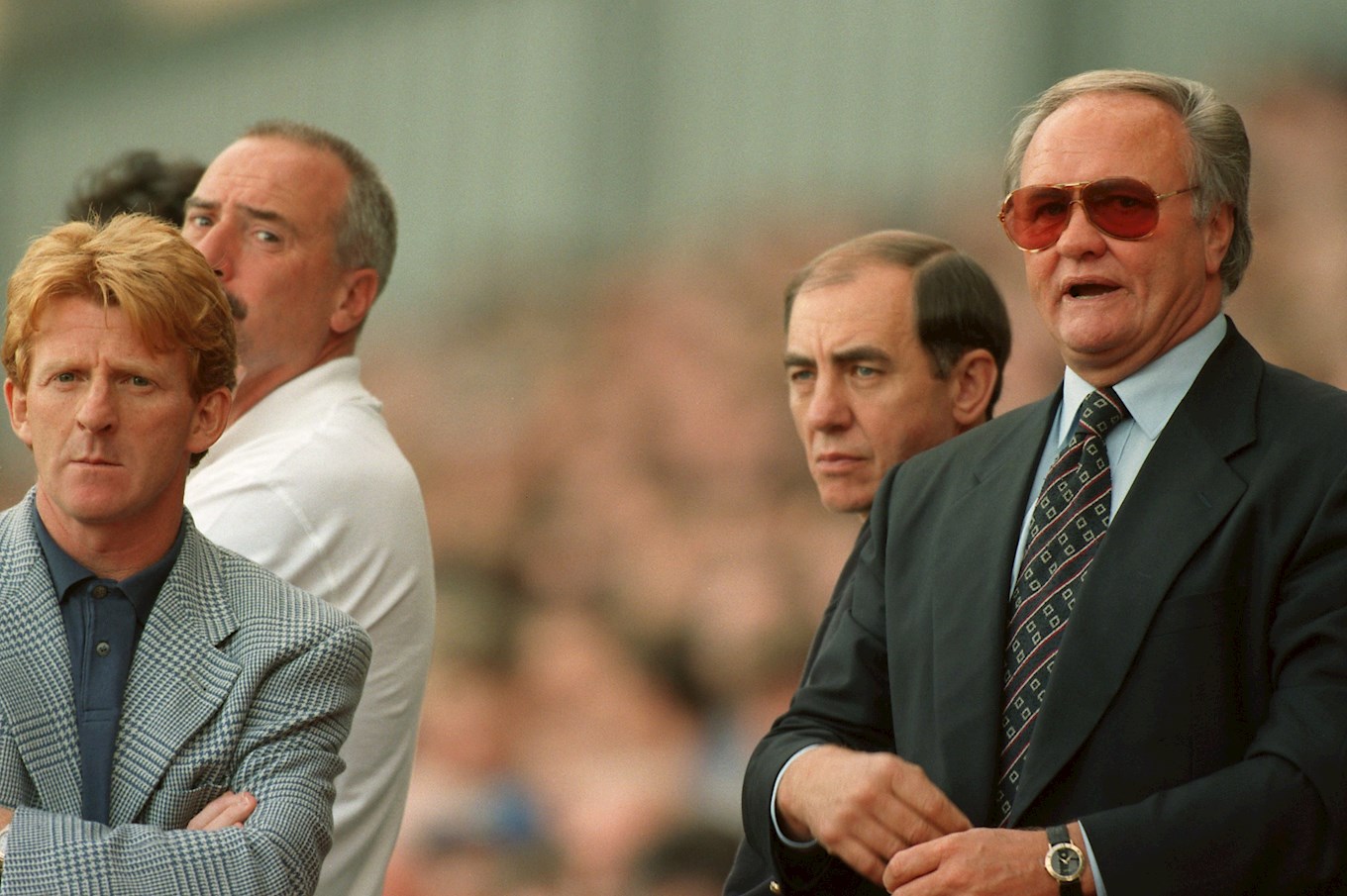 By Guy Fawkes night of the following campaign Big Ron stepped aside for Gordon Strachan, who he had brought to the club. Only one game in 12 had been won with a meagre five goals scored, although Big Ron could point to an unbeaten run of five games – all drawn – as his tenure came to an end.

Ron Atkinson’s time at Coventry wouldn’t feature on a list of the club’s greatest moments, just as Coventry wouldn’t appear amongst the highlights on Atkinson’s CV but he did manage to keep the Sky Blues in the top flight – albeit by the tightest of margins - and with a personality as huge as ‘Big Ron’s’ City were never short of media attention while he was at the club. 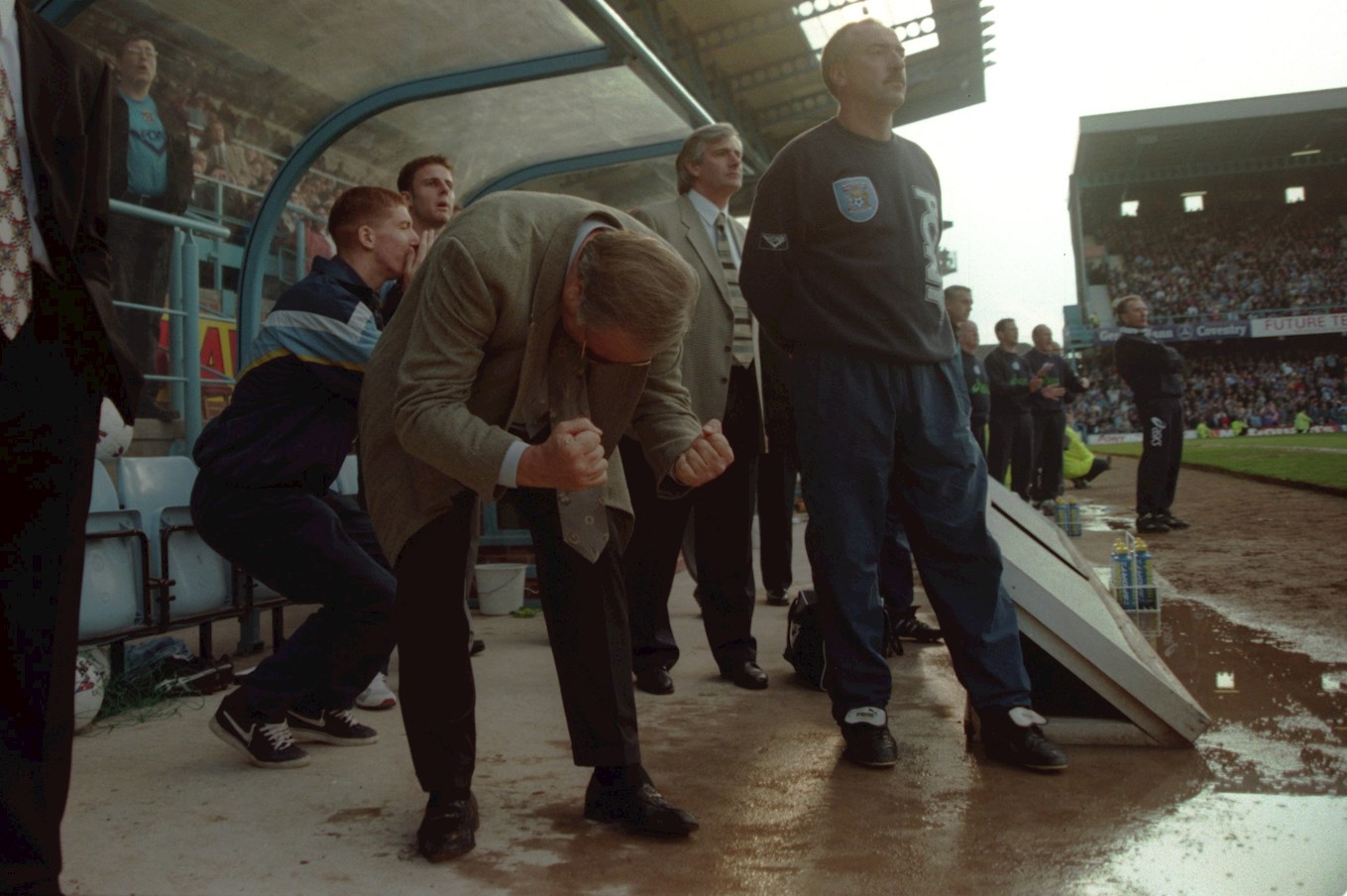 As a player himself Ron Atkinson wouldn’t make many people’s ‘Dream Teams’ but at Oxford United he was indispensable and undoubtedly would be in their best ever XI. 560 appearances for Oxford made him their record appearance maker. Pre-dating his achievements with Kettering, Atkinson captained them to Southern League titles in 1961 and ’62 and eventually to the equivalent of what is now the Championship.

Wing-half Atkinson also skippered fourth division Oxford to the FA Cup quarter-finals in 1964, when his future club Kettering were one of the teams beaten. That run also included a sensational fifth-round win over Blackburn who at the time were 77 places above Oxford in the league. Challenging for the top-flight title, Rovers had recently won 8-2 away to a West Ham side who would go on to win the FA Cup but were over-run by Atkinson who was then known as ‘The Tank’ rather than Big Ron. 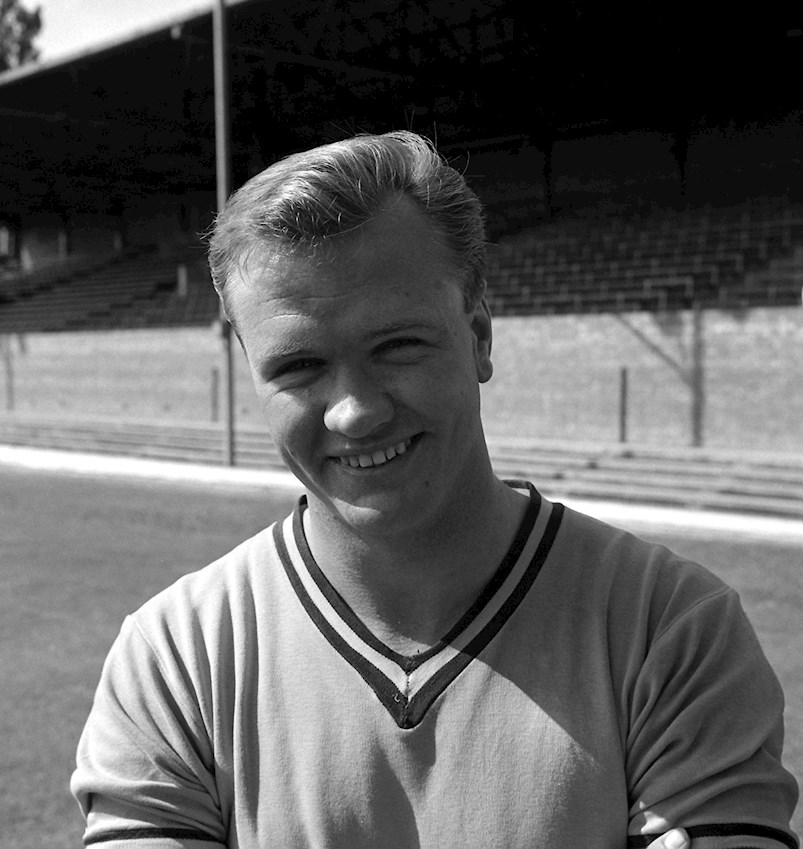 Atkinson had begun as an apprentice with Wolves in the mid-fifties. Following his release Aston Villa signed him as a 17-year old after spotting him playing as an inside forward for BSA Tools.  However, he didn’t break into the first team during three years at Villa Park and in terms of first team appearances was a one-club man as a player.

The Tank may have been a one-club man at Football League level (Albeit Oxford United were called Headington United when he signed) but when he metamorphosed into Big Ron there were 11 managerial appointments at nine different clubs.

Joining Kettering as player/manager in November 1971 after a brief spell with Witney Town he demonstrated his managerial know-how, guiding his side to the back to back titles, taking the Southern League Division One North title in 1971-72 and the Southern League Premier League a year later, when they also won the Northants Senior Cup for good measure.

Appointed manager of Cambridge on 22 November 1974, 24 hours later he saw his side held by Hitchin in the FA Cup. That was a goalless draw and Cambridge also failed to find the back of the net in his first two league games but throughout his managerial career Big Ron became known for producing attacking teams as flamboyant as his personal penchant for jangly jewellery and big fat cigars.

16th when he took over, Cambridge were sixth by the end of the season. Unbeaten in their last 11 games they would have fancied their chances in the Play-offs that these days they would qualify for but did not exist at the time.

Atkinson’s first full season proved a disappointment as Cambridge remained anchored solidly in mid-table but won the league a season later, topping the table without interruption from New Year’s Day onwards. In 2012 Big Ron was back at The Abbey Stadium as part of Cambridge’s Centenary celebrations, managing a Cambridge Legends XI against Dion Dublin’s All Stars.

Big Ron’s final game in charge of Cambridge United saw him sign off with a 3-2 win at, of all places, Oxford. That result left Cambridge second in the table, a position they held at the end of the season in achieving back to back promotions. 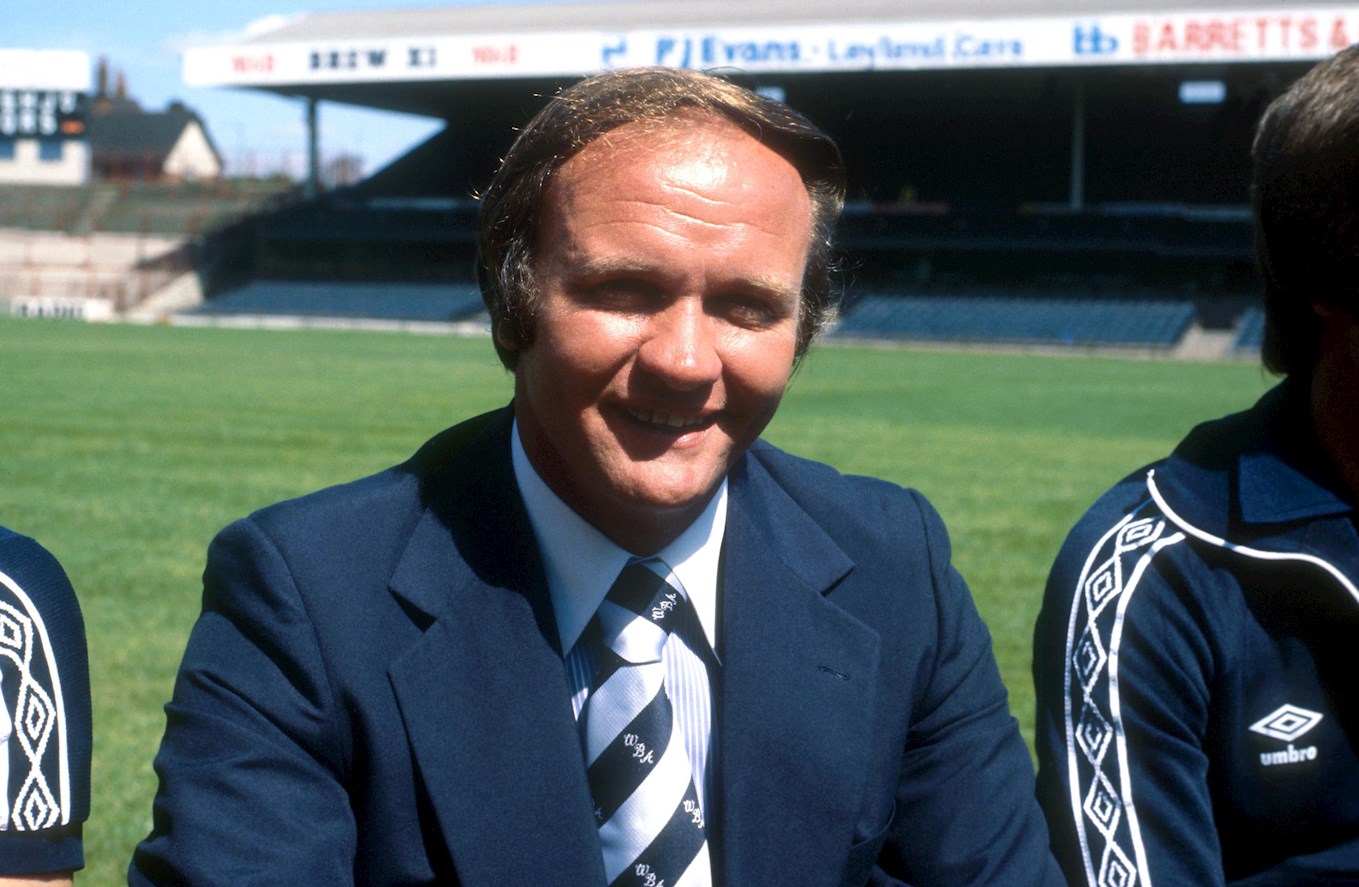 Having graduated with honours from Cambridge, Ron got bigger with a move to West Bromwich Albion the day after his last match with The U’s. Taking the Baggies to sixth and then third place in the top flight in 1979 and 1980; as well as reaching the semi-final and quarter-final of the FA Cup and UEFA Cup (only losing on away goals), drew the attention of Manchester United.

Taking over at Old Trafford in June 1981 he succeeded Dave Sexton, who in turn came to Coventry. United were not the dominant force they became in the Ferguson era (thanks in no small part to Mark Robins) or had been under Sir Matt Busby, but Manchester United are Manchester United – a truly giant club.  Taking Bryan Robson from West Brom and getting the best out of Gordon Strachan who he later brought to Coventry, Atkinson brought joy to Old Trafford, as well as the FA Cup which he won twice in three years in the mid-eighties as well as reaching the semi-final of the European Cup Winners’ Cup. 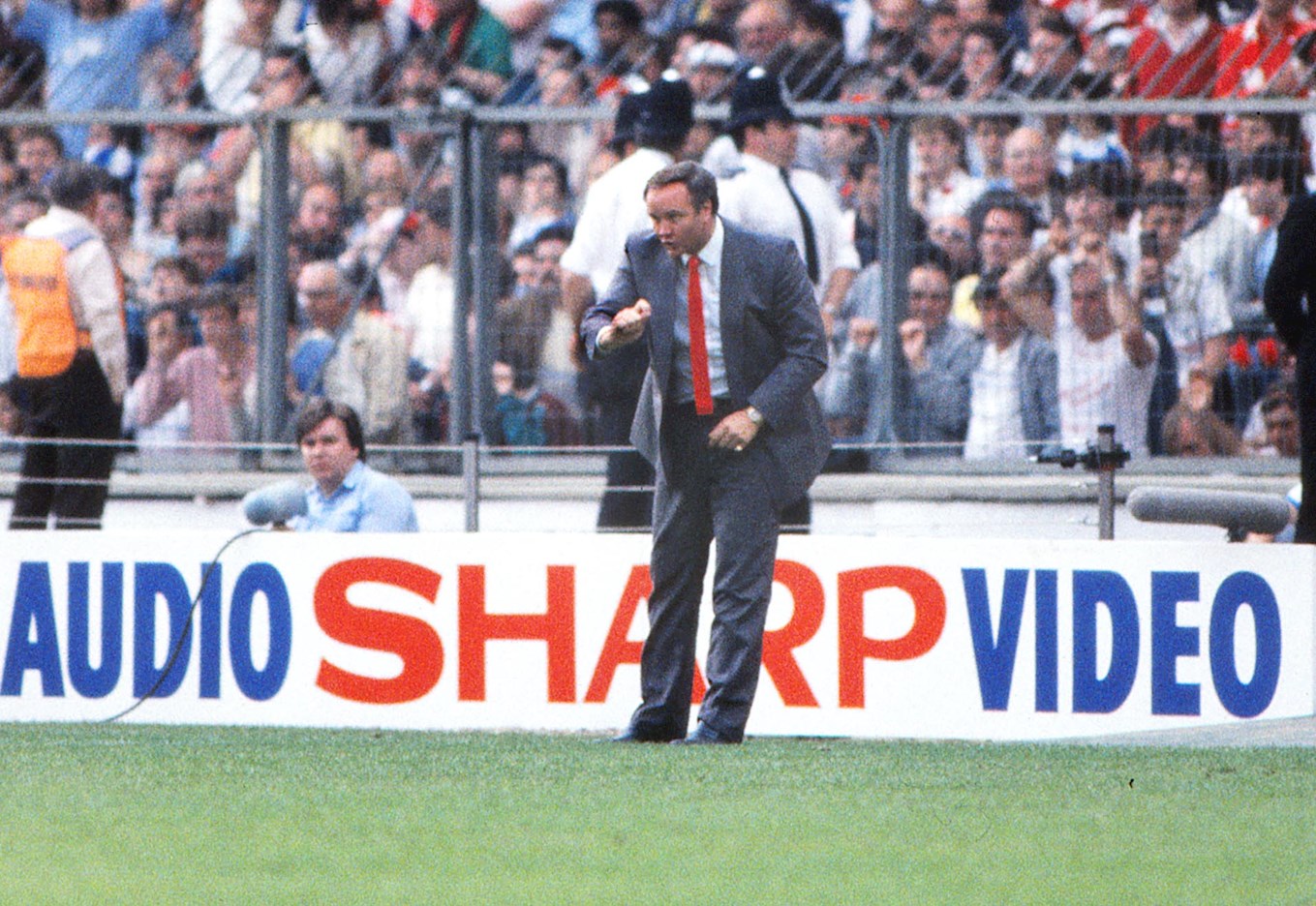 Liverpool born, Atkinson found the team of his birthplace to be the dominant force during his time in Manchester but during his five-year spell at the club they never finished outside the top four which was something United failed to do in any other five-year spell between 1964 and 1995.

Ten years almost to the day before relinquishing his manager’s job at Coventry Atkinson got the sack at Manchester United. A heavy League Cup defeat at Southampton was the final straw for the United board with United in the bottom four of the league – his last game in charge at Old Trafford having been a 1-1 draw with Coventry.

It was almost a year until Big Ron returned to a managerial hot-seat, this time back at West Brom, who in contrast to their top three first division finish under Atkinson had now slipped into the second division (Championship). Finishing fourth from bottom was a far cry from The Baggies high-flying first period under Atkinson but it kept them up – just.

Ten games into the following campaign, WBA languished in 18th place after a home loss to Barnsley but his previous record still made Big Ron a big name and one big enough for Atletico Madrid. Winning six and losing three of his dozen games in charge as his team climbed to third wasn’t good enough for tempestuous owner Jesus Gil who replaced Atkinson with his assistant Colin Addison, a move which singularly failed to impress Big Ron.

Atkinson’s next departure left fans of his club just as unimpressed. Having managed Sheffield Wednesday for almost two and a half years in which they had been relegated, promoted and won their first trophy since 1935 – the League Cup – Atkinson announced he would be continuing with The Owls. Seven days later he departed for Aston Villa. 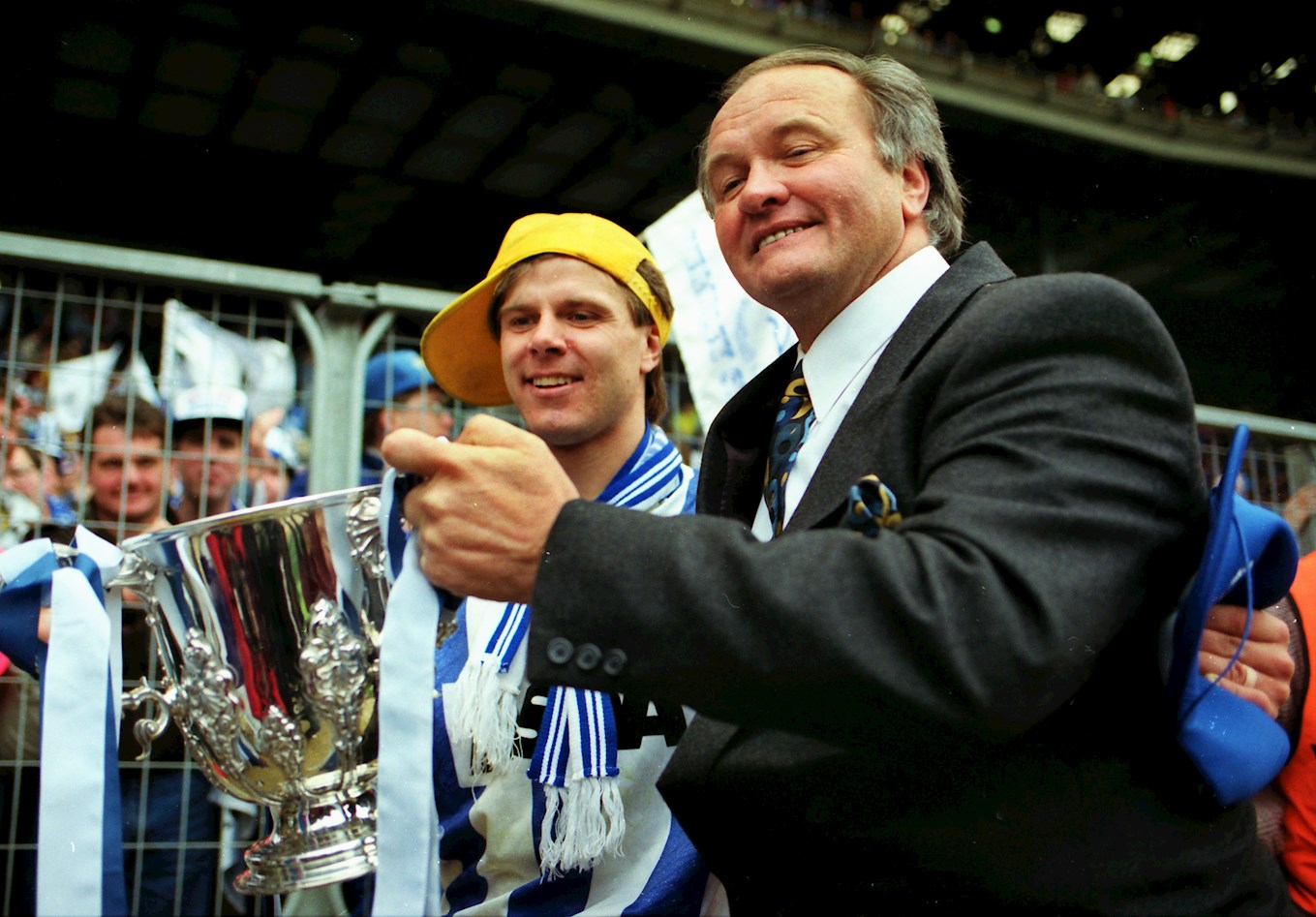 His 178 games in charge of Villa proved to be the second longest (after Manchester United) of his managerial career. As with Sheffield Wednesday he won the League Cup, having the satisfaction of beating Manchester United in both Wembley finals, although in 1993 United had beaten his Villa team to the inaugural Premier League title. To date no English manager has surpassed Atkinson’s Premier League placing.

As with his time at United and Coventry early November signalled the end of Atkinson’s time at Villa, the sack coming three days after the dreaded ‘vote of confidence’.

Three years, almost to the day, later Big Ron returned to Hillsborough having had his Sky Blue sojourn in between.  Pulling Wednesday out of trouble he stayed until the end of the season and had one last post, taking charge of Nottingham Forest from January to May 1999, the club being relegated in a defeat by Villa. 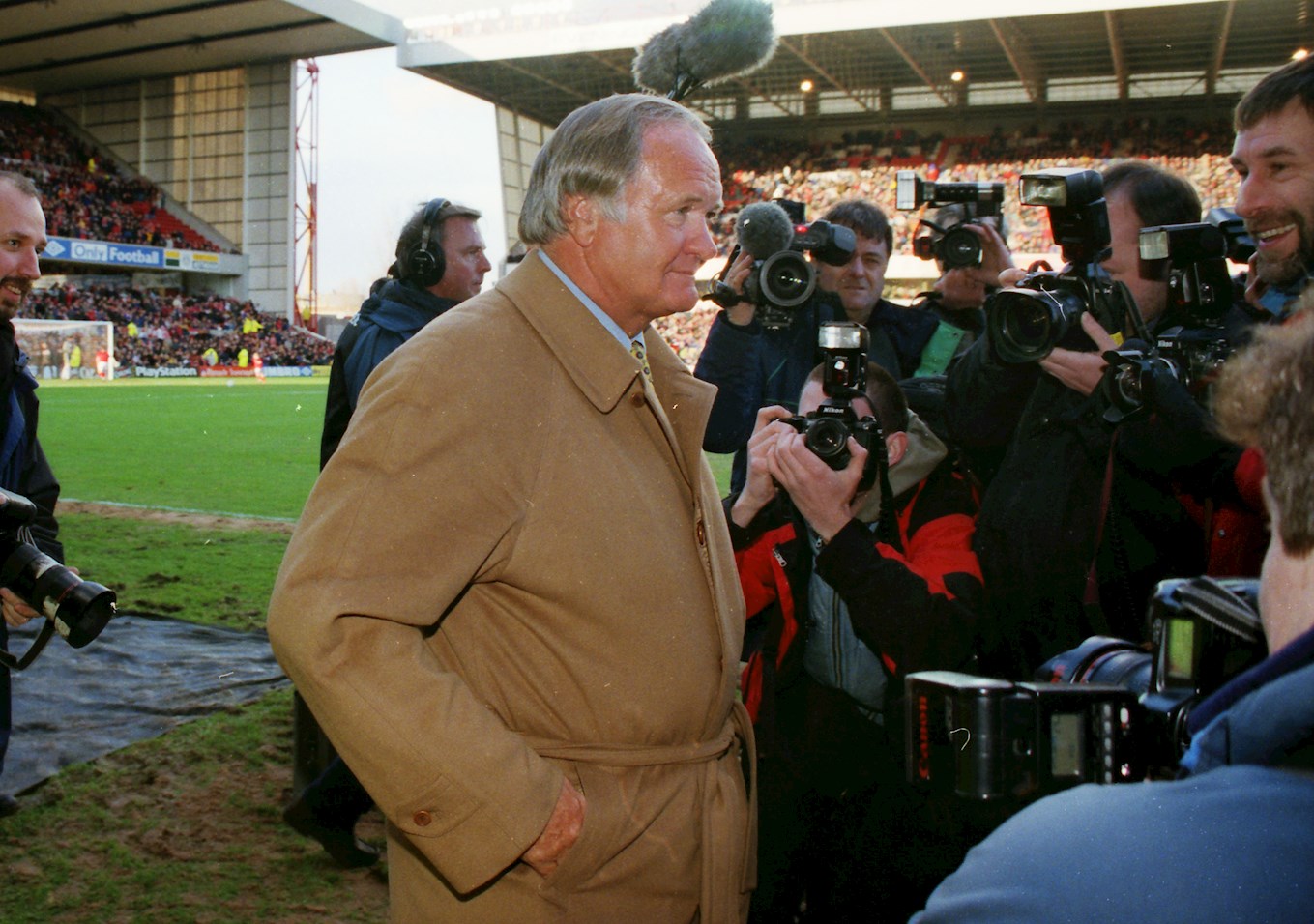 It was a sad end to a long, often successful and always entertaining career but by no means his worst moment. Always drawn to the TV cameras Big Ron produced too many embarrassing media moments: managing Harchester United in ‘Dream Team’, a housemate in Celebrity Big Brother, taking part in Celebrity wife-swap and perhaps worst of all releasing a Christmas song called ‘It’s Christmas, Let’s Give Love a Try.’

All these paled into insignificance compared to a horrifically racist comment he made during a TV commentary in April 2004, referring to Marcel Desailly, a 1998 World Cup winner. The aftermath of this saw him disappear from screens where he had been an engaging football pundit. Ironically Atkinson had promoted black players from way back in the days when racism was embarrassingly prevalent in UK stadiums. Ironically too in 2007 when Atkinson returned to the game in a three-month spell as Director of Football back at Kettering he resigned in protest at the dismissal of manager Morrel Maison, who is black. 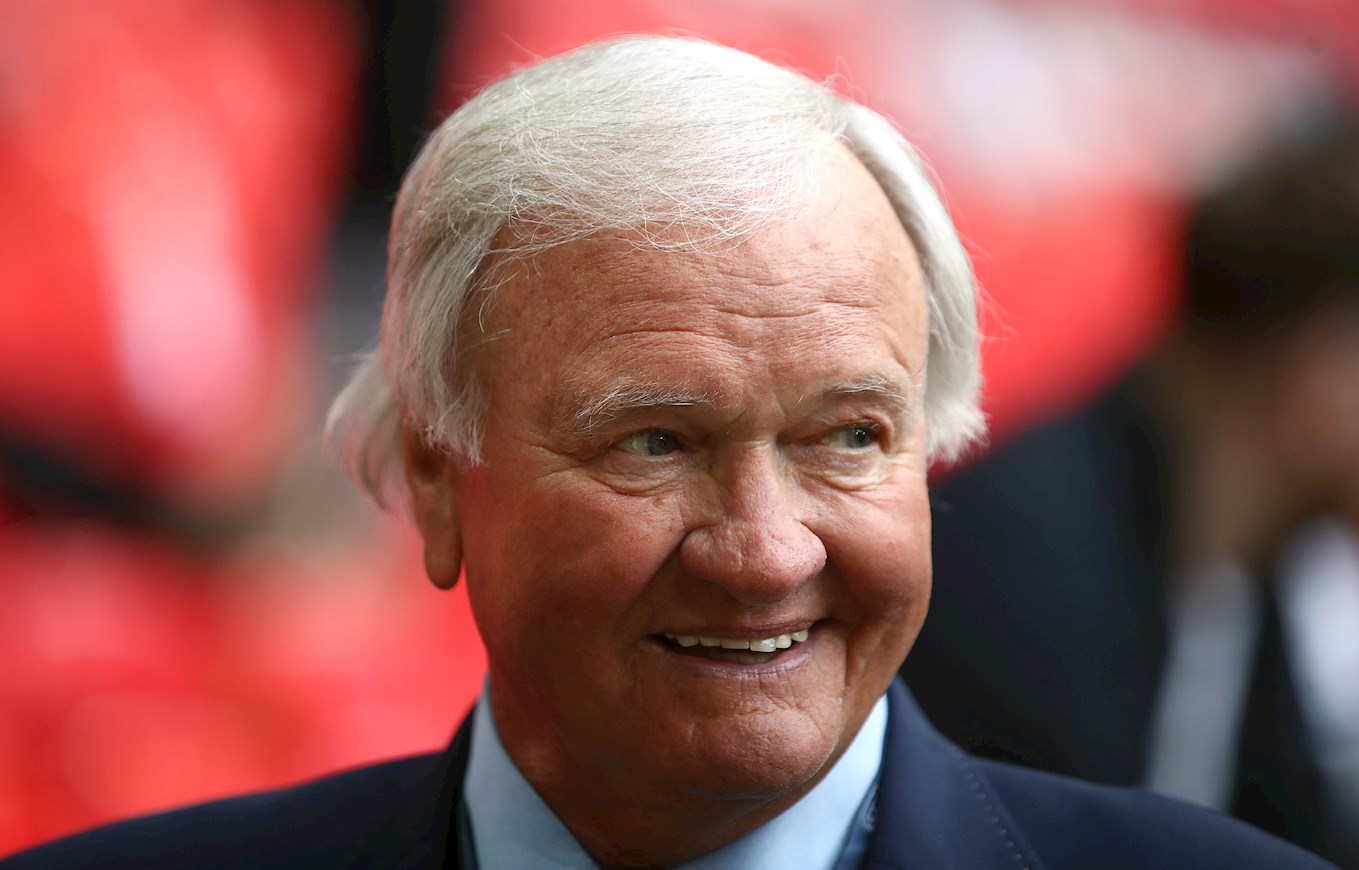 Clearly there is no place for racism in any form and Atkinson was inescapably wrong to come out with his comments on Desailly. While in no way excusing him, nonetheless Big Ron’s record in the game as a player and a manager make him a person who deserves to be remembered for the joy de vivre he brought to the game, even if precious little of that was on show while he was a Sky Blue Supremo.