Mark Robins is the latest in a long line of Supremos, the men who have tried to bring success to City. In this series first published in matchday programme PUSB, writer Rob Mason reflects on the highs and lows on those who have occupied the hot-seat. 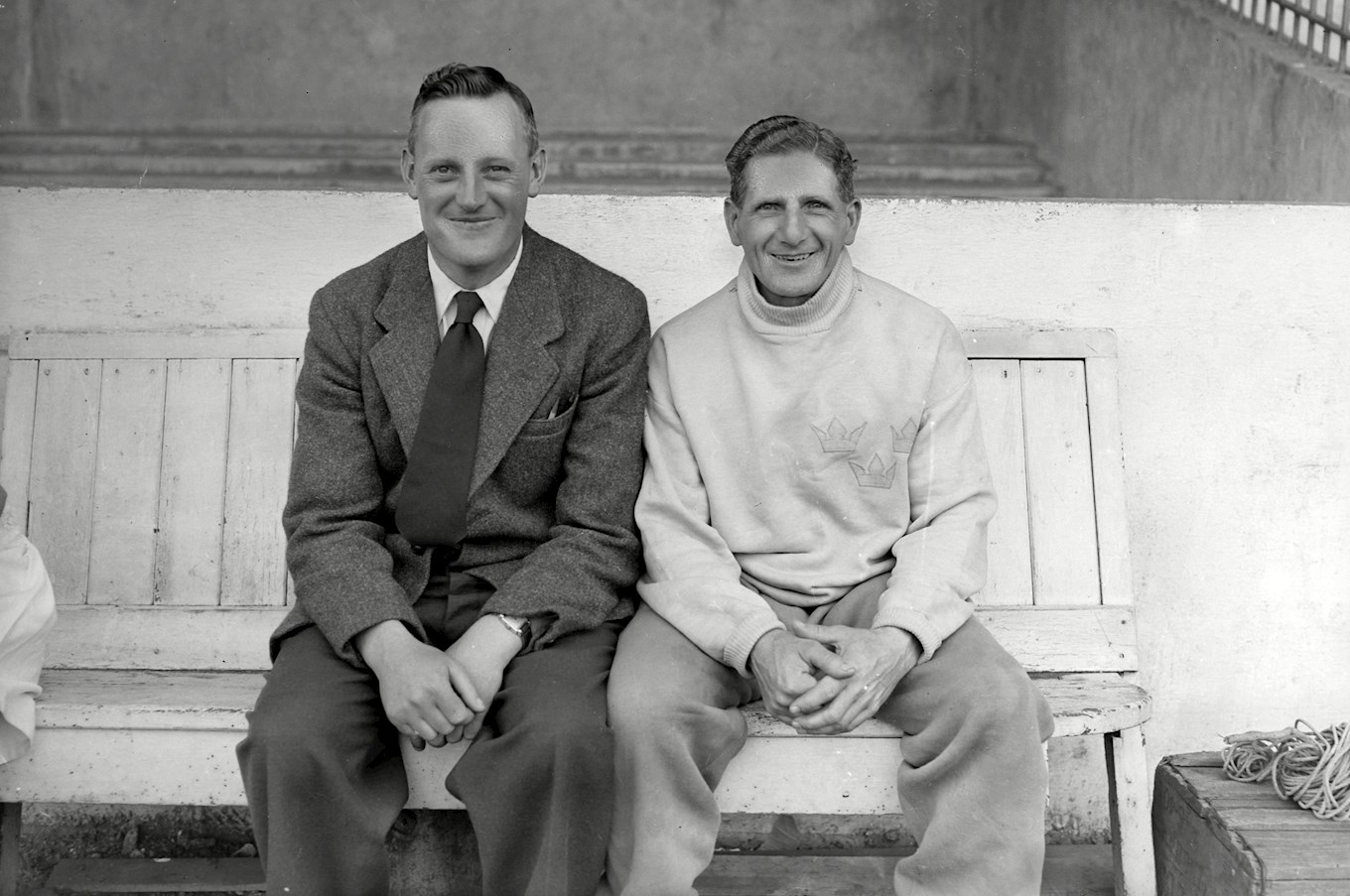 George Raynor managed Coventry City in the second half of the 1955-56 season. Given that City finished eighth in Division Three South after collecting just two points from their last five games under his guidance, perhaps at first glance Raynor appears to warrant little more than a foot-note in this series of City Supremos.

That would be to underestimate the fact that in George Raynor Coventry City had as leader one of the most successful managers these shores have ever produced. Not making the most of his ability was not something only CCFC were guilty of. It could so easily have been George Raynor who was in charge of England’s World Cup winners instead of Sir Alf Ramsey. Like Ramsey, Raynor too received a knighthood for his services to football, but his came in Sweden.

In a career that included managing in a World Cup final, winning the Olympics and leading Juventus, Raynor was in charge at Highfield Road from January to June 1956. Although 1955 had ended with defeat at Colchester, the previous five games had been won, City twice scoring five times, so the team were going well when he took over. 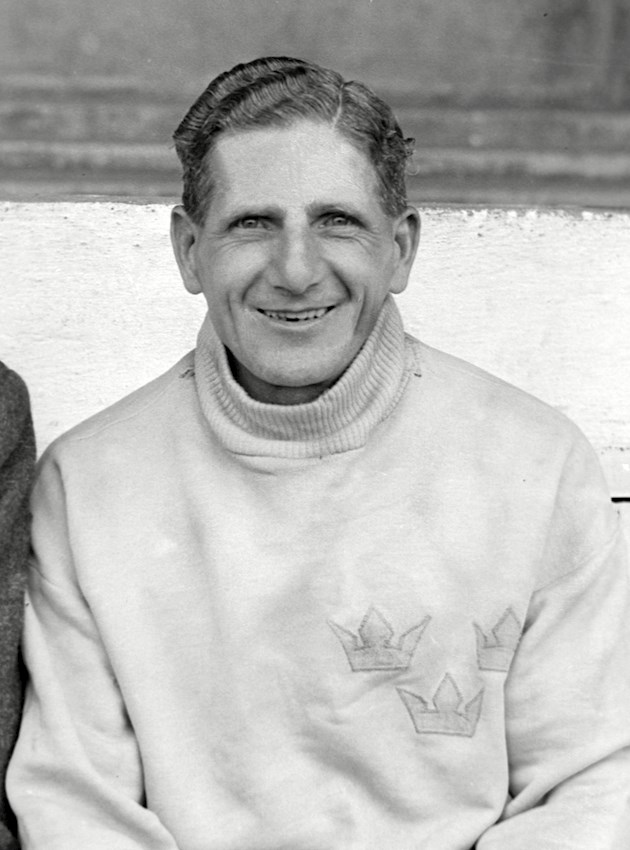 Already eliminated from the cup, 1956 kicked off with a loss at Ipswich before six goals in two games produced back to back wins as City searched for promotion. Stuttering form meant just one victory in the next eight matches so that even a Happy Easter consisting of three wins in five days proved fruitless. That lean five game end of Raynor’s reign left Coventry a massive 17 points adrift of the solitary promotion place in the division.

Unwilling to wait for long term plans to blossom the City board replaced Raynor with Harry Warren just over a month after the end of the season, with Raynor reverting to his previous position of chief coach. Inevitably such a move was ill-starred. Like Warren, Raynor was a former Sheffield United player but they did not share a footballing philosophy.

George Raynor had been happy to come to Coventry as an assistant but not to be demoted to one. He remained with City until this stage of the following season, leaving altogether in November 1956 midway through a dismal run of one win in 14 games. He had arrived at the club as number two to Jesse Carver. Carver had managed most of the biggest Italian clubs and in 1948 had taken charge of the Netherlands National team at the London Olympics - where he had seen the tournament won by a Sweden side coached by Raynor. 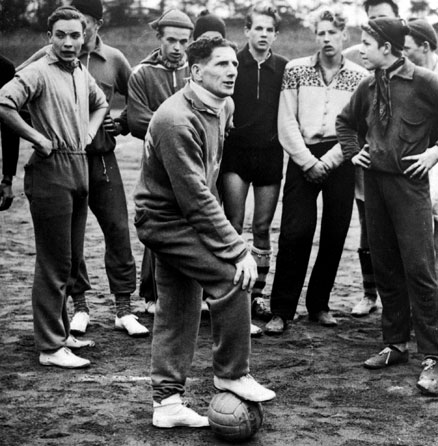 Since then, like Carver, Raynor had become a big name in Italian football. In 1954 he had left Scandinavia – having also managed GAIS, AIK and Atvidabergs FF - to become technical director of Juventus who were coached by Italy’s 1938 winning goalkeeper Aldo Olivieri.  Raynor remained in Turin for less time than he would in Coventry, leaving the day after a home draw with Napoli on Halloween that left Juve with the horror show of no wins in five, after they had come out on top in George’s first two fixtures.

Raynor was in demand, taking over at Lazio where his squad included his ‘own’ Sweden international Sikvard Lofgren. At Lazio George worked as part of a duo with Technical Director Roberto Copernico. Come the following February Raynor got one up on Juve when they were beaten by the Biancocelesti (The white & sky blues) in Rome but by the following season he was on the move again, this time to Coventry City as he wanted to prove himself a success in England.

Under a decade on from his gold medal triumph at the London Olympics Raynor’s record with Sweden was far from a flash in the pan. The 1950 World Cup saw them beat Italy in winning their group before finishing third overall in a tournament played on a round robin basis. The Swedes however were without their best players due to the nation’s policy of only picking amateurs.

Just as AC Milan broke the bank to bring in the Dutch trio of Gullit, Van Basten and Rijkaard after Italia 90, at this time Milan had taken the Swedish triumvirate of Gunnar Gren, Gunnar Noordahl and Nils Liedholm. At their peak at the ages of 27 to 29 they were three of the world’s top players but amongst those not available for Raynor’s squad, which made his achievement even more creditable. 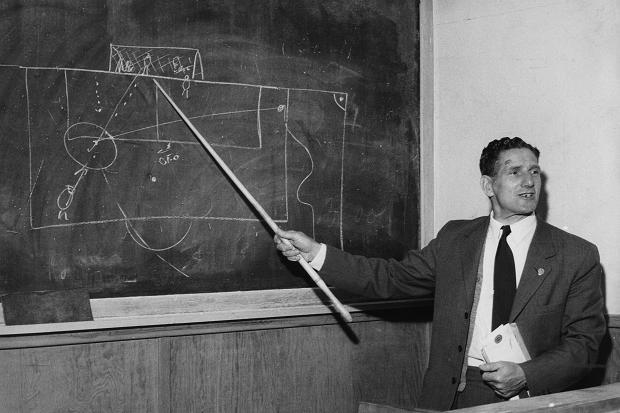 Still shorn of their top men, Raynor’s Sweden took bronze at the 1952 Olympics. Later, after his Coventry experience, George took Sweden to a World Cup final meaning that in four major international tournaments – with a team not at its strongest – the lowest Raynor ever finished was third. With Bobby Robson and Gareth Southgate fourth at Italia 90 and Russia 2018 respectively, only Sir Alf Ramsey in 1966 has done better in a senior tournament for England since Raynor’s achievement in not one but four tournaments.

Infamously in the early fifties England were twice hammered by the Hungary of Ferenc  Puskas. Raynor had also suffered at their hands in the 1952 Olympics, losing 6-0 in Finland. After again losing to them in Stockholm in July 1953, Raynor fathomed out a plan to thwart the Magical Magyars.

Hungary were unbeaten in 33 games in which they had scored an incredible 146 goals as Raynor’s Swedes (still without their top players) took them on at the Nepstadion in Budapest. Man-marking linchpin Nandor Hidegkuti in his withdrawn role, Raynor’s side held Hungary to a 2-2 draw, with only the woodwork protecting the Magyar’s unbeaten record in the final minute.

Ahead of Hungary’s game against England at Wembley ten days later George contacted the F.A. to offer advice on how to tame the best team in the world at the time. The blazers thought they knew better and ignored him. Never before beaten by an overseas team at Wembley England lost 6-3 and subsequently by 7-1 in the Nepstadion six months later.

Believing himself to be the best man to manage the England team, Raynor had a point to prove when he came into the English game with Coventry after his Italian adventures. Instead after his short-lived reign at Highfield Road, George found employment coaching in the Lincolnshire education service and teaching English to Hungarian refugees before being lured back to Sweden.

Just 19 months after leaving Coventry George Raynor was in charge of a side who were leading in the World Cup final!  While Gunnar Nordahl had retired, by now Raynor was able to call upon the veterans Gren and Liedholm but each of them was by now more than twice the age of 17-year old Pele who scored twice as Brazil won 5-2 to win the World Cup for the first time. 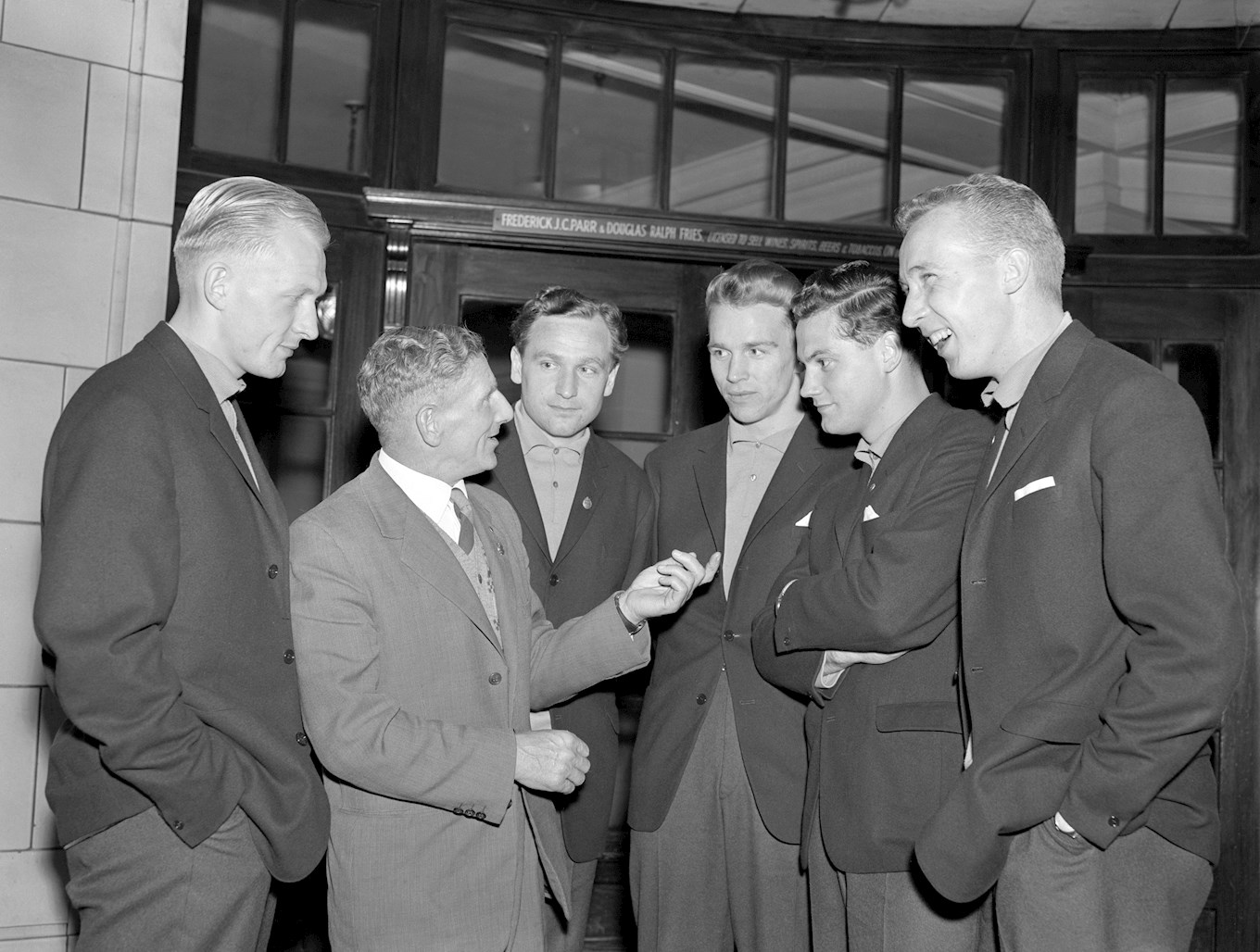 The following year Raynor took charge of Sweden at Wembley, where despite a goal from Bobby Charlton he showed the FA what they were missing as his team won 3-2. It was the first time England had lost to an overseas team at Wembley since the Hungary match six years earlier.

With such a CV you might imagine that Raynor’s return to England would be to a top club. It was – providing you are Skegness Town’s most ardent supporter, for that is where George re-surfaced. He was actually Skegness’s manager when he doubled up in charge of Sweden at Wembley. Evidently he was a busy man as at the time he also had a job working in the stores at Butlins! Clearly the contrast of managers then and now is as wide as the changing lifestyles of top players.

England have never warmed to mavericks on or off the pitch. Brian Clough for instance never got the England job and similarly Raynor’s spikey attitude evidently scared off some. In so many ways George Raynor was ahead of his time. He advocated three points for a win and a smaller top-flight, decades before they came about

While there would be a job back in Sweden with Stockholm based DIF in 1960, George’s last stand came at fourth division Doncaster who he took over after their relegation to the bottom division in 1967 and stayed with them until December of the following season, before being replaced by Lawrie McMenemy. 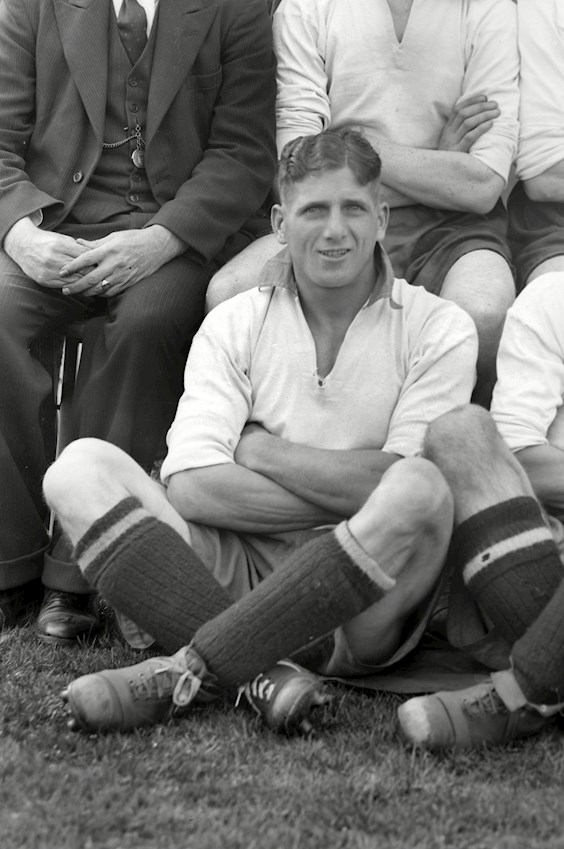 Departure from Doncaster marked the closing of a final chapter of a footballing story which began in nearby Sheffield. Born in Wombwell on January 13th 1907 he played one game for Sheffield United in a County Cup semi-final, lost 4-1 at Hillsborough against Sheffield Wednesday in October 1931, before joining today’s visitors Mansfield for the 1932-33 season. A modest playing career as a nippy winger then took in spells with Rotherham, Bury and Aldershot with whom he would return as reserve team coach after World War Two.

During the war George worked as a PT instructor in Iraq, attracting the attention of the secretary of the FA Sir Stanley Rous, a man who would open many doors for Raynor. 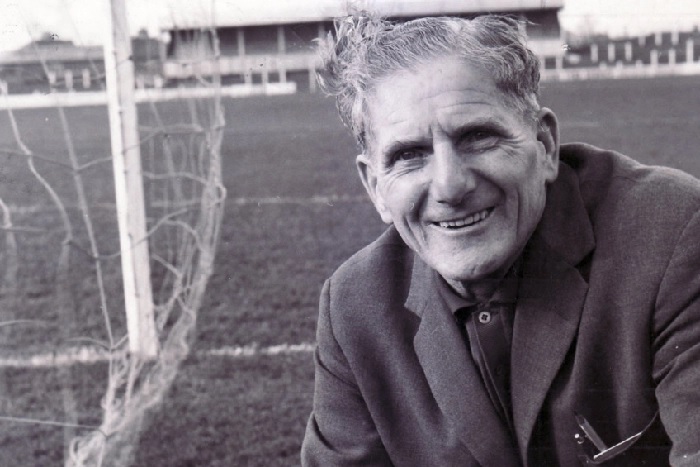 George Raynor passed away in Buxton, Derbyshire, aged 78 on November 24th 1985. One of the most famous names of English football – but one few people in England had really heard of.  Coventry City had been George’s most senior posting as a manager in his own country. His time at Highfield Road was but a footnote on his own CV, but nonetheless Coventry City have been managed by a man who managed a side in the World Cup final.