Mark Robins is the latest in a long line of Sky Blue Supremos, the men who have tried to bring success to City. In this series Rob Mason reflects on the highs and lows of when Don Howe was the man in the hot-seat.

In an age where the higher reaches of the Premier League are dominated by foreign coaches who are often viewed as tactically superior to home grown managers (a point former Sky Blue defender Sam Allardyce has often made), it’s worth remembering that sometimes English coaches have shown themselves to be the tactical equals or superiors of the best the rest of the world has to offer.

As a footballer he was named as one of West Brom’s 16 greatest ever players, when Albion commemorated their 125th anniversary. He also won 23 England caps as a full back at a time when caps weren’t handed out like confetti and there were far fewer international matches, but he went on to surpass his achievements as a player once he became a coach. 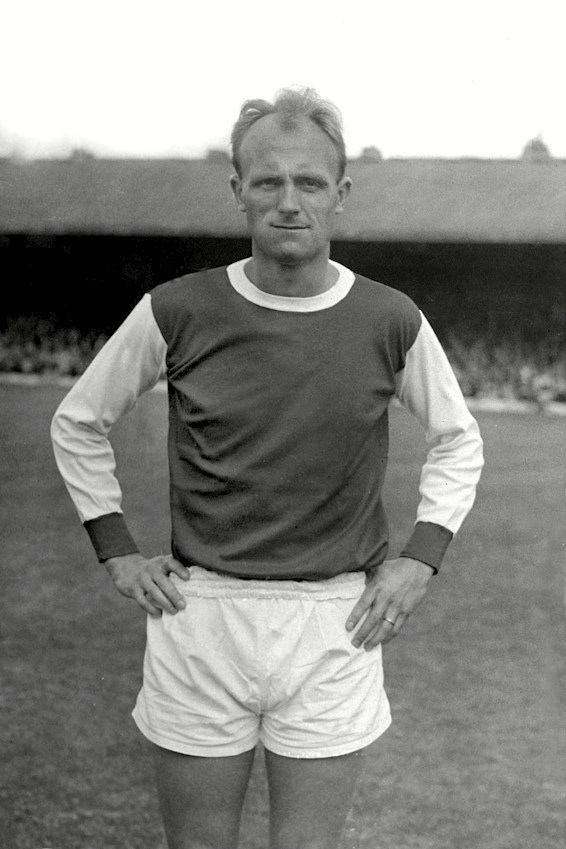 Always forward and deep thinking, Don Howe’s tactical acumen quickly bore fruit. Having finished his playing days with Arsenal, following a broken leg in the year England won the World Cup, he became The Gunners reserve team boss. In November of the following year Don stepped up to become chief coach to Bertie Mee, replacing Dave Sexton who would also go on to manage The Sky Blues. In March 1969 Don was promoted to assistant manager and two seasons later helped his side become only the second team of the century to achieve the double of league championship and FA Cup, thereby hall-marking his stamp of quality in the coaching world.

It was just over two decades later that he arrived at Highfield Road. Although by then he had managed at home and abroad Don came in the assistant’s role which always seemed to suit him best, such a position allowing him to focus on players and the training ground where he was happiest, rather than being the front man which some relish but others see as being on the periphery of what is important.

As a player, Terry Butcher was one of England’s best ever centre-halves. Having benefited from being coached by Don Howe at international level he brought Howe to Coventry in 1991, three years after Don had worked alongside City legend Bobby Gould in miraculously winning the FA Cup with Wimbledon.

Fifteenth in a 22 club top flight, Coventry weren’t pulling up any trees under Butcher as a good start to the season had faded away with just two wins in three months. Two days after a Dion Dublin goal had earned Cambridge a cup draw at Coventry Butcher was dismissed, after wrangling over whether his player/manager status should change to simply being manager. Not enthused by a potential caretaker-manager post, Don Howe stepped in a day later on January 7th, accepting an 18-month contract to become City’s supremo.

Fixture lists seem to have an innate ability to provide chance quirks and sure enough Don’s debut as Coventry manager just four days later brought to Highfield Road the QPR team he had managed until the end of the previous season. Although City led, they had to settle for a point before Howe’s cup pedigree eluded him in the replay at Cambridge where Dublin again took the honours.

A David Smith goal gave Howe a first victory in his fourth game (at Palace) but there would be just two more wins all season as a poor side slipped and stumbled its way to survival. It was an especially important season not to fall the wrong side of the relegation line as Howe held on to Coventry’s place at the top table just as the Premier League was about to start. In a competition dominated by Sky surely the Sky Blues had to be in it? 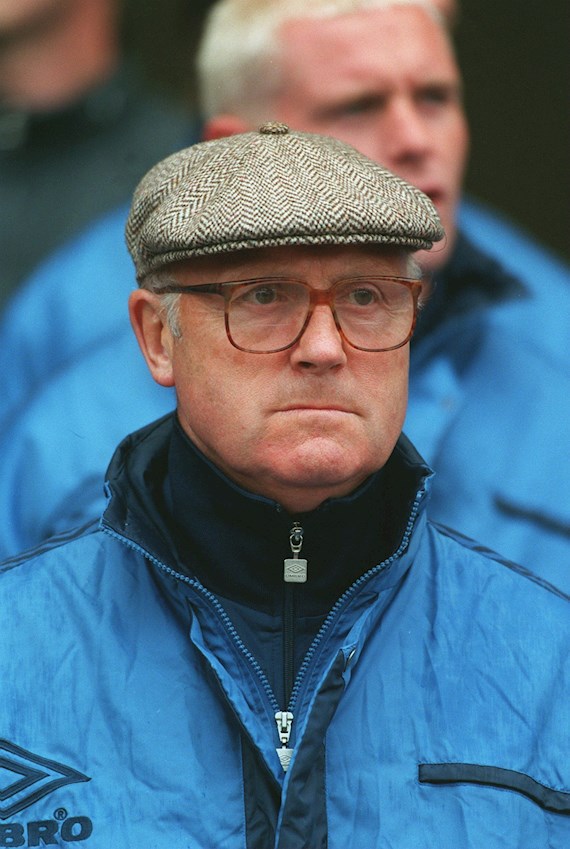 That second half of the 1991-92 campaign under Don Howe would not send any pulses racing and, in a sense, it was one of the dourest periods in the club’s top flight history. Survival here wasn’t so much a case of nail biting late escapes but under Howe’s disciplined and compact approach Coventry clawed every point they could muster by being organised and difficult to score against. That 1-0 win at Selhurst Park was followed by no fewer than four goalless draws in a row. Not pretty but a steady ticking over of the points tally, all the more impressive when it is considered that two of those matches were against Liverpool and Manchester United. In entertainment terms though the football on offer was so dull that by the last of that run fewer than 9,000 turned up for a meeting with Norwich.

In the 18 league games after that initial 2-2 draw with QPR, on 14 occasions City would concede once or not at all. Three times they would be breached twice and only on a strange occasion where they might as well have played at the London Palladium rather than White Hart Lane an attack of entertainment broke out, as City lost by the odd goal in seven against Spurs. However, other than those three goals which were fruitless, only five other goals were registered in the last 17 games. Great use was made from those rare goals though as a trio of 1-0 wins and a couple of 1-1 draws helped the club to narrowly keep their heads above water. Howe was extracting all he could from the players at his disposal. It was achieved through organisation and application and was effective but definitely not exciting. Nonetheless but for Don’s ‘Know-how’ Coventry City may well not have been one of the founder members of the Premier League.

Ultimately Coventry survived thanks to already relegated Notts County fighting back to take Luton down with them on the final day of the season, as with Coventry losing on the same day Howe’s side escaped. However, survive they did although it wasn’t pretty – or popular, especially having brought back goalkeeper Les Sealey who had blotted his copybook in the eyes of some fans due to some of his public comments after leaving the club almost a decade earlier.

Sealey played twice while Steve Ogrizovic was unavailable, conceding only one goal. Howe had brought him in to replace Paul Heald who in his two games on loan from Leyton Orient leaked more goals than Oggy had conceded in the previous nine league games. Ever the pragmatist, Howe had solved the problem. 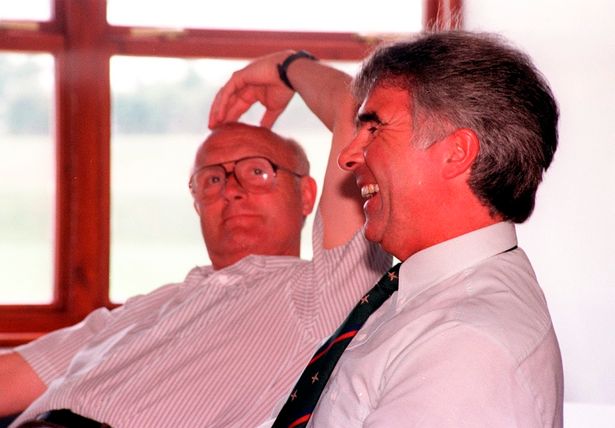 Don duly solved his own problem by leaving his job at Highfield Road. Although Wolverhampton born, Howe had continued commuting from Hertfordshire. Having reportedly suffered from heart problems, he decided that having kept Coventry up despite a paucity of playing resources it was time to call it a day.  No doubt another factor was that instead of him looking ahead to the first season of the Premier League as the boss, he was to share responsibilities by renewing his successful Wimbledon double act with Bobby Gould. Ironically Gould’s availability was as a result of his sacking by Don’s old club at The Hawthorns.

Following a spell coaching at Chelsea Don recommenced coaching the Three Lions for a third time, this time linking up with Terry Venables having earlier coached England under the management of both Ron Greenwood and Bobby Robson. With Venables he coached England to the semi-finals of Euro ’96 having coached Robson’s England to the World Cup semi-finals in 1990.  Both were lost on penalties, the tournaments being England’s best finishes since being World Champions just as Don was hanging up his boots. He had played in the World Cup himself, appearing in all four of England’s games in 1958. 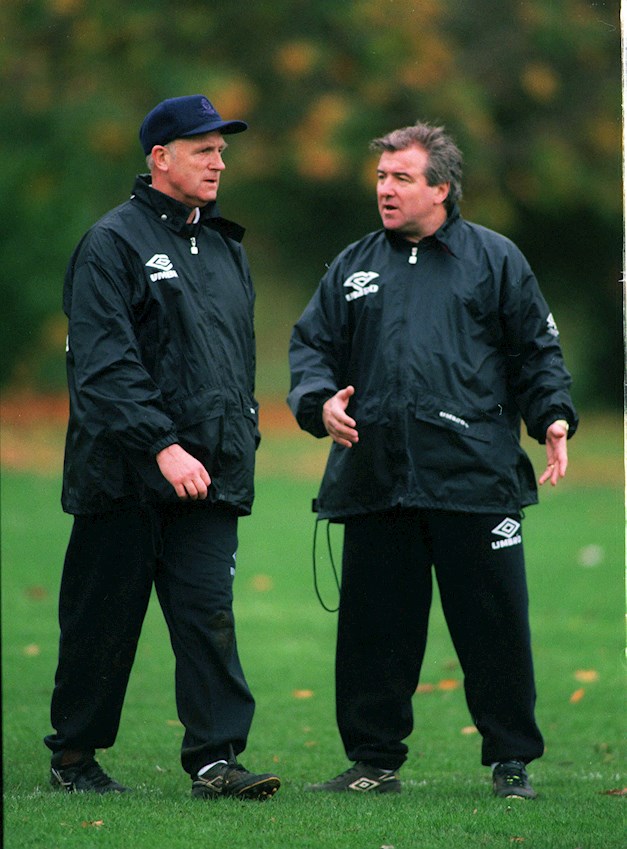 Perhaps inevitably Don was destined to return to Arsenal which he did, his role as youth team coach enabling him to pass on his vast knowledge to the talented individuals being groomed under the tutelage of Arsene Wenger. Howe retired in 2003 at the age of 67 having seen his youngsters win the FA Youth Cup in 2000 and 2001. The following year his contribution to the game was marked by a Special Merit Award from the League Managers’ Association.

Obituaries to Don Howe were unanimous that his forte was as a coach rather than as a manager.  His time at Coventry marked the end of his career as the latter. He had started in that role straight after coaching Arsenal to the double as his old club West Brom appointed him as the successor to Alan Ashman. This was a couple of months after the two major pieces of English silverware had followed the previous season’s Fairs Cup (Equivalent to the modern day Europa League) into the Gunners’ trophy cabinet.

Howe’s spell at The Hawthorns survived the club’s relegation in 1973, Don eventually departing in April ’75.  Bobby Gould was amongst the players he signed for the Albion who he had first joined in 1950. Turning professional two years later, around the time future Coventry manager Jesse Carver was in charge at The Hawthorns, Don’s debut came in August 1955 against Everton. He went on to play 379 times for the club, scoring 19 times. Ironically for a coach whose teams later lost several significant penalty shoot-outs, Don took spot kicks himself, including one on a day he registered his first two senior goals as WBA recorded their biggest win since 1892 when defeating Manchester City 9-2 in 1957.

After finally leaving The Hawthorns when his managerial reign came to an end Howe took on a six-month spell in Turkey with Galatasaray.  October of the same year (1975) saw him return to England as coach of Leeds under Jimmy Armfield – the man who had replaced him in the England team many years before. 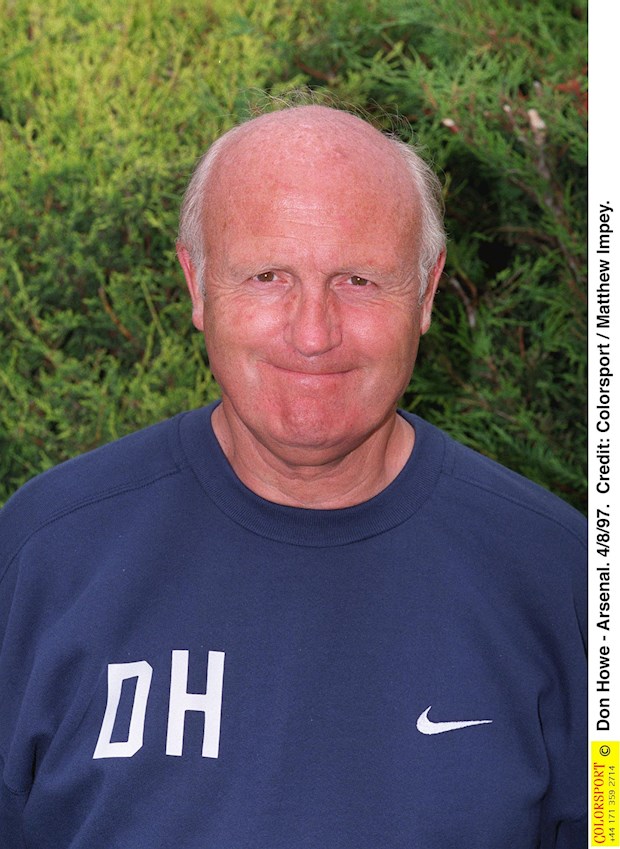 Just over two years later the magnetism of Arsenal took Don back to Highbury, initially as coach under his old Gunners team-mate Terry Neill. Once again his love affair with the FA Cup saw him coach his club to the trophy in 1979 in a spell where his side reached the final in three consecutive seasons. Having already won a European trophy with the club, in 1980 Howe coached Arsenal to the final of the European Cup Winners’ Cup against Valencia – where once again a penalty shoot-out was his team’s undoing.

Neill’s sacking this month in 1983 saw Don take over as caretaker manager, eventually being confirmed as Arsenal manager in April ’84, a role he held until March 1986 when he resigned after a 3-0 home win over Coventry.

Following a spell coaching in Saudi Arabia, next stop was his hugely successful spell as he put the Don into Wimbledon with Bobby Gould. Roles were reversed when Howe became number one at QPR in November 1989, Gould later joining him as assistant in 1990-91, the year before Don came to Coventry.

Hugely regarded within the game, even after his retirement Don was in demand - this time a decade ago for instance he was employed by the FAI to use his expertise to help them find a top class manager, a search that concluded with the appointment of Giovanni Trapattoni.