Coventry City have announced details of Season Tickets for the 2019/20 campaign.

Early Bird Season Tickets are now on sale for the Sky Blues matches at Birmingham City’s St Andrew’s Trillion Trophy, following the agreement of a groundshare for the 2019/20 season.

Season Ticket prices have been reduced for the 2019/20 campaign, while the Premium Zone category of pricing has also been removed.

The Early Bird period will last one month, ending at midnight on Wednesday 10th July.

After promotion back to League One the season before, the 2018/19 campaign was an exciting one which saw the Sky Blues just miss out on another Play-Off spot. The Sky Blues will be looking to be competing at the top end of the table again next season, with five new additions already to the squad and more lined up.

Fans will be able to pay for their Season Ticket through monthly instalments with V12 Finance.

The early bird period lasts until midnight on Wednesday 10th July – giving supporters exactly one month to buy early and save.

All Adult supporters will have the chance to save upto £2000 per year as they join a new CCFC Rewards Scheme – with discounts available at high street stores and brands including Tesco, Asda, Boots and many more. * This means fans can essentially pay for their Season Ticket – and then some – using the money they save in the Rewards Scheme.

JSB Under 13s continue to be FREE when accompanied by a paying adult. Blocks T20 and T21 are designated as the Family Zone seating area, where a family friendly atmosphere will be encouraged.

Students can access the concession rates too – as well as young adults (Under 21s), seniors (over 60s) and armed forces members.

Dave Boddy, CCFC Chief Executive, said: “We’re pleased to be able to announce details of the 2019/20 Season Tickets, though not at the venue that we wished to be playing at.

“We know this is a very difficult situation for fans, and not one that anyone wanted. We respect the decision of fans if they wish to come or not, and have made the Season Ticket option as favourable as possible to encourage fans to support Mark Robins and the team in person, as we know this will be vital.

“We have reduced Standard Zone prices and removed the Premium Zone category to a price that gives a saving for fans going to Birmingham, while helping maintain a budget for us to achieve our aims this season.

“Despite the delay in Season Tickets going on sale, there will still be a one-month Early Bird period, which will end on 10th July.

“Season Tickets remain the most cost-effective way of supporting the team for all 23 home league matches at St Andrew’s.

“The revenue from Season Tickets is vital in providing the funds needed by Mark Robins to further strengthen our squad for what promises to be an exciting campaign, and I thank all of the fans who purchase for their support of the team in this way.

“We are working on travel and car parking arrangements, and details of this will be confirmed shortly.”

Fans can see the full price grid and stadium plan for 2019/20 below. Season Tickets will only be available in the Kop Stand at St Andrew’s, with other areas opening up for Sky Blues fans on a match-by-match basis depending on demand.

Two open days will be held at St Andrew's, so fans can view potential seats. Details will be confirmed shortly regarding this. 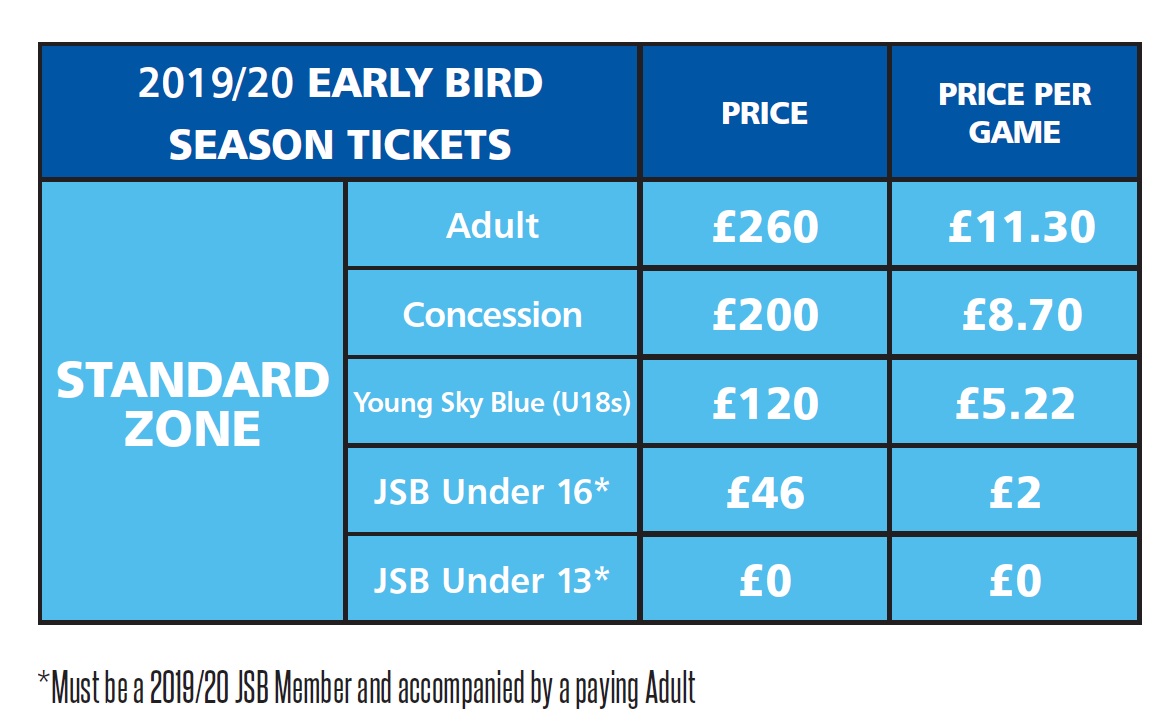 You can also pay in monthly instalments with V12 Finance.

Please note, the interactive seating plan is not compatible with mobile devices.

Disabled supporters Season Tickets are charged at the age relevant price, with a carer going free if required.