The Early Bird Season Ticket period for the 2019/20 campaign has come to an end.

It lasted 6 weeks and at the end of it, the Sky Blues have just over 2,800 Season Ticket holders for the season ahead.

The Club respects the decision of those who have chosen not to purchase a Season Ticket while the Coventry City is groundsharing at St Andrew’s, but would like to express its deep gratitude and thanks to everyone who has purchased a Season Ticket so far and committed to supporting Mark Robins’ side during the season ahead at home games.

Season Tickets are still available, with Adults now priced at £299 (£13 per game) and Concessions £230 (£10 per game), while Junior Sky Blues Under 13 will still get a FREE Season Ticket. 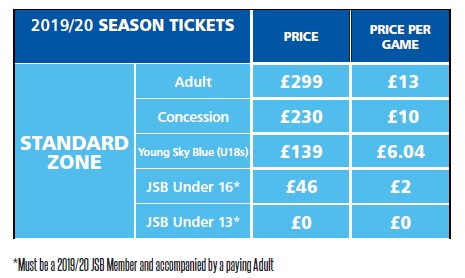 “We are grateful to everyone who has purchased their Season Ticket for the campaign ahead at St Andrew’s.

“When we were required to go to groundshare to fulfil our fixtures this season, we knew that it would be a difficult decision for our supporters and that Season Ticket sales would decrease. However we as a Football Club had no other option.

“The number of Season Tickets sold is higher than what we expected, and we are grateful for that support and commitment from our fans to their Club.

“Season Tickets are now on sale at our ‘regular’ price, but are still tremendous value for supporters at £13 per game for Adults or £10 per game for Concessions.

“If fans are unable to commit to a Season Ticket, we have our excellent 6 and 12 Match Package options available so that they can still save money when supporting the Sky Blues, but we have also reduced our Match Ticket prices to only £20 – whether you buy in advance or on the day – which is great value.

“Meanwhile Coach Travel is only £5 return per game, with pickups in Coventry city centre and near to the Ricoh Arena too, and we’re shortly confirming more off-site parking options for St Andrew’s.

“These circumstances are not what anyone wanted or wants - but we are determined to make the best of this situation for our supporters, our players and staff, and Coventry City Football Club.”