Ahead of the Sky Blues facing Bristol Rovers this weekend, Rob Mason profiles Bobby Gould, who played for and managed both clubs...

Twice manager of Coventry as well has having started a long and eventful playing career with his home-town Sky Blues, Bobby Gould breaks the mould in that in the cut-throat world of football management he succeeds in being one of the nicest people in the game. Bobby Gould is one of football’s gentlemen.

Bobby took charge at Highfield Road on 31 May 1983. It was his second job in management having begun at Bristol Rovers where he had begun his managerial career and would return to in May 1985, following his departure from City three days before the end of the previous year.

Gould would return to Coventry in the summer of 1992 for a 16-month spell before enjoying a four-year spell as manager of Wales. In total, from joining Coventry in 1963 until his final involvement with Weymouth in 2010, Bobby had almost half a century in the game and is still a walking talking ambassador for the sport and Coventry City in particular. 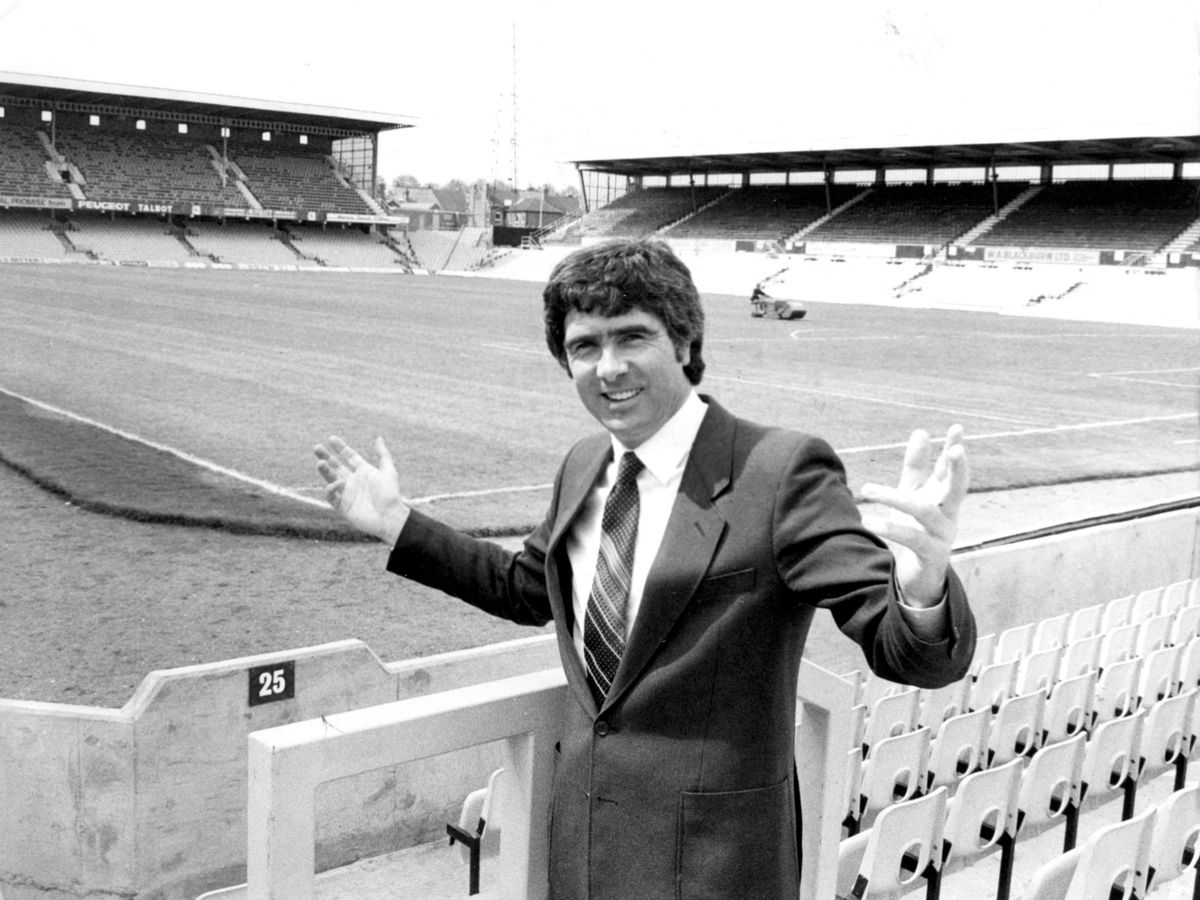 After succeeding Dave Sexton as City’s supremo Bobby began with a win at Watford and by the time a Terry Gibson hat-trick was the highlight of a stunning 4-0 annihilation of Liverpool in December the Sky Blues were riding high in fourth place in the league. It was a remarkable transformation from the previous season when the team had been 19th but it was to be a season of two halves, a run of just three draws amongst 10 defeats early in the new year making 1984 look like a nightmare of Orwellian proportions.

If the wolves were gathering for Bobby it was Wolves who came to the rescue. The bottom of the table men from Molineux had been the last side City had beaten - in an FA Cup second replay in January - when they turned up a week before Easter and were narrowly beaten thanks to a Mick Ferguson winner. Seven days later Ferguson was on the score-sheet again as Nottingham Forest were beaten and, notwithstanding 17 goals being conceded in the three remaining away games, another Ferguson goal on the final day of the season ensured City’s survival. Ferguson’s goals ensured that Birmingham City went down – astonishingly Ferguson was on loan from Birmingham after Bobby borrowed him in March! 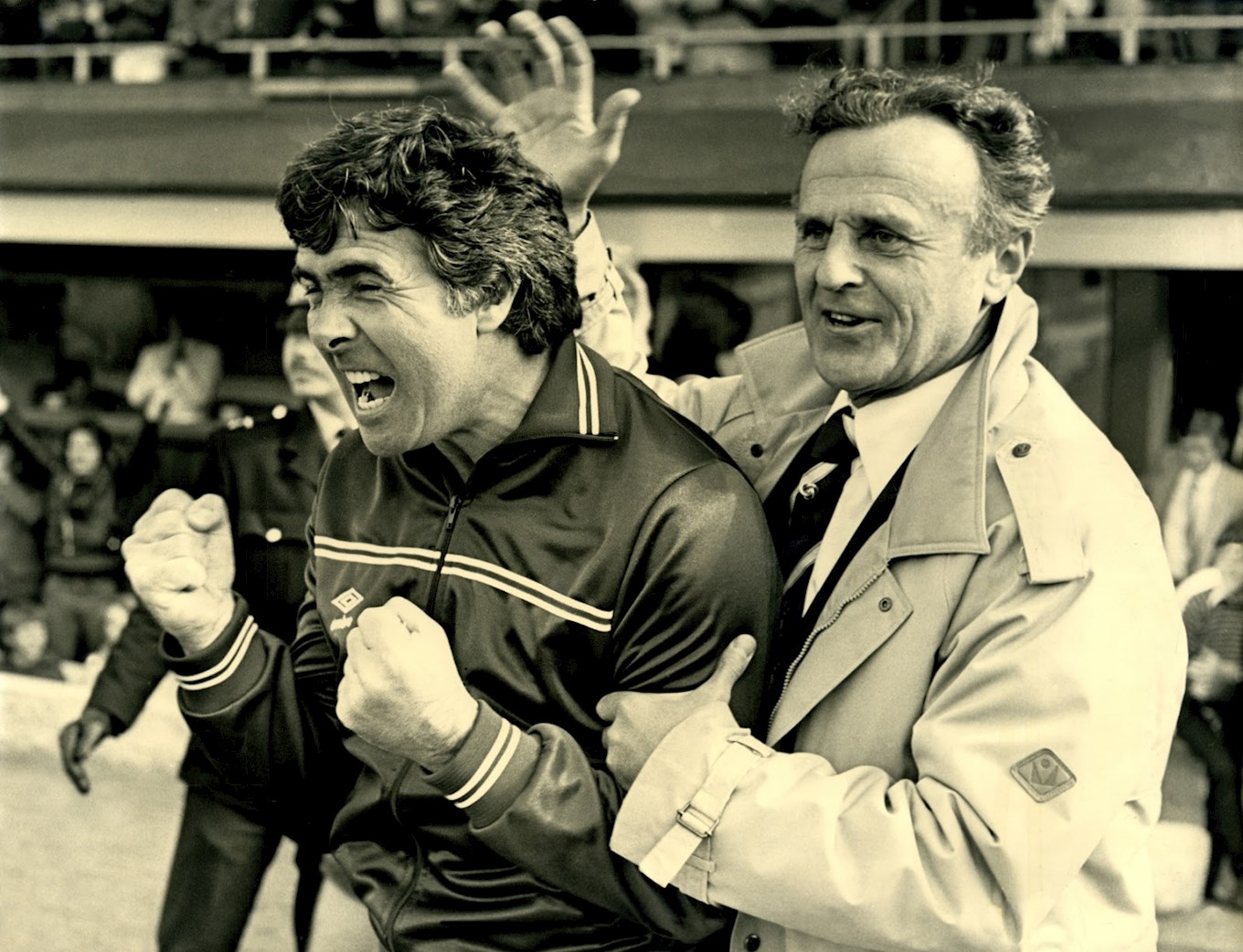 Nonetheless having overseen the same 19th place they had occupied before he took over Gould was on thin ice as the 1984-85 season started, especially as it began badly. Ferguson having left Birmingham for Brighton it was another former Birmingham centre-forward Gould signed for Coventry, Bob Latchford. He got off the mark in his second home game in a win over Leicester but the only other goal he would get for the club came in a 6-2 defeat at Chelsea and following a 5-1 thrashing in the reverse fixture at Leicester just before Christmas, a 2-0 defeat at Luton on Boxing Day proved to be the knock-out blow as Gould was sacked two days later, with City in 20th place.

The club would stay up by a point but in the fullness of time reflections would illustrate that having inherited a team where eight men were out of contract, Gould’s rebuilding had left City with the nucleus of the side that would give the club its greatest day two and a half years later. Over half the team who won the FA Cup were players signed by Bobby. 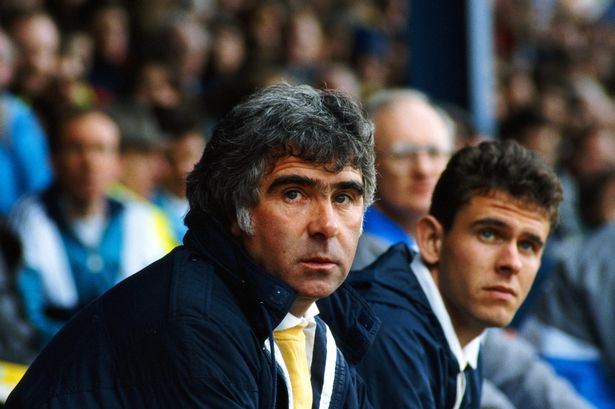 As Coventry were beating Spurs at Wembley Bobby was coming to the end of his second stint as boss of Bristol Rovers. The Gas had finished 19th in Division three in Gould’s second season, a three place drop on his previous campaign having thrown his lot in with Rovers four and a half months after leaving City.

Having seen the Sky Blues lift the cup Bobby swapped the Pirates for the Crazy Gang and lifted the FA Cup himself a year later as his Wimbledon side somehow beat the all- powerful Liverpool. The Dons were one of a quartet of southern clubs Gould had coached – along with Charlton, Aldershot and Chelsea before moving into management and now having overseen one of the greatest fairy-tales in modern day football this crowning moment of his managerial career is one that ultimately illustrate the ever optimistic view of Bobby Gould that anything is possible. 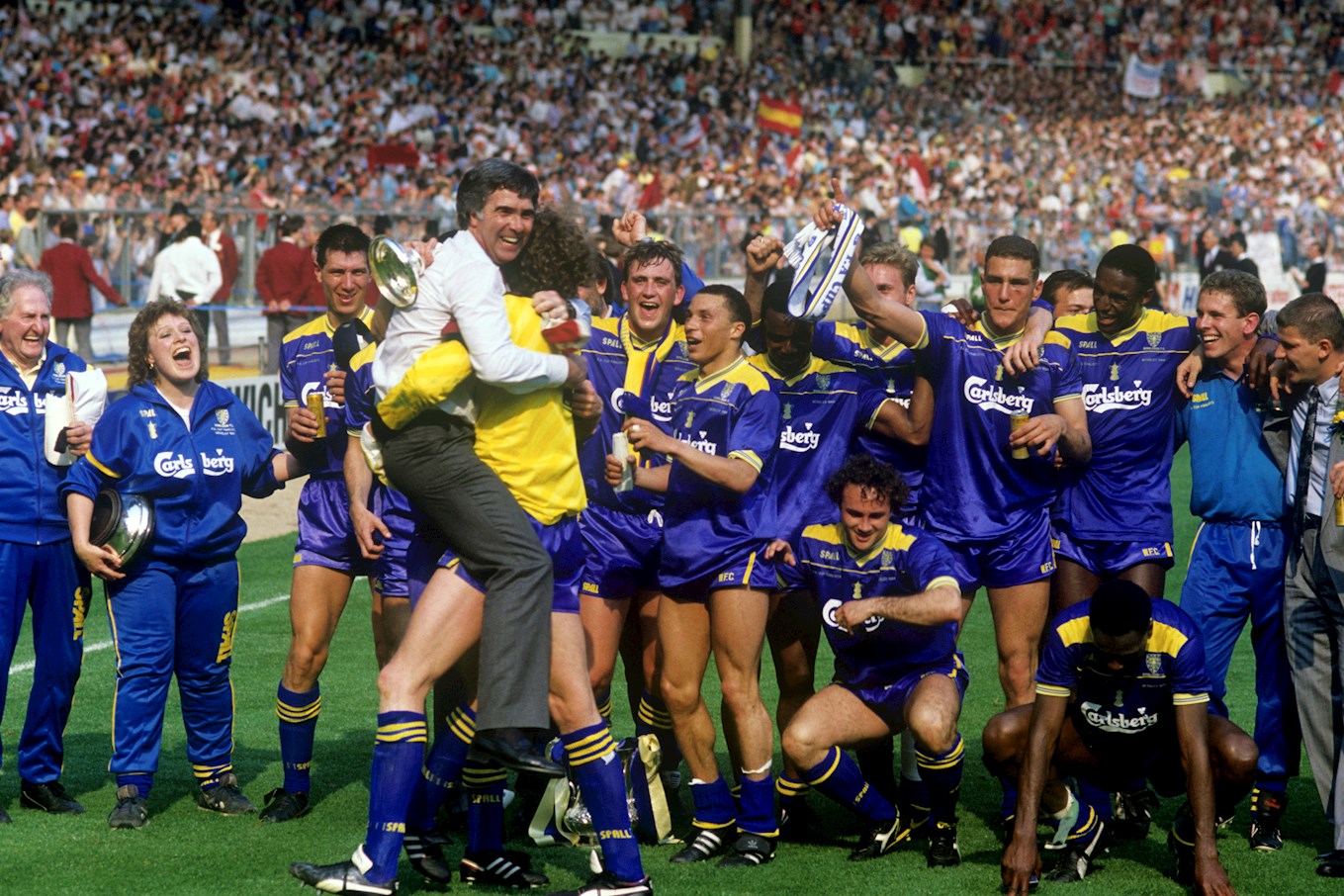 Almost as astonishing as their cup triumph is the fact that under Gould, Wimbledon finished seventh in the top flight in their cup-winning season. Perhaps the strain of being cup-holders told on the Dons at the start of the following season. Just a single point was taken from the first five fixtures, the last of those bringing a home defeat by Coventry which dumped The Dons on the bottom of the table.

The Crazy Gang would slip into gear though reaching the quarter-finals in their defence of the FA Cup and climbing to eighth in the table before slipping back to 12th after winning just one of their last nine games.

Gould’s third and last campaign at Plough Lane followed a similar pattern. 19th after five games, improvement followed with a final position of a more than creditable eighth place, a highlight being a 5-2 win at Chelsea where Terry Gibson poached a couple of the goals.

It was at this point that Bobby walked away from the club where he was replaced by his assistant Ray Harford.  Gould returned to the game the following December as assistant to Don Howe at QPR, Howe having been Gould’s assistant as Wimbledon won the cup; and in due course destined to manage Coventry himself in 1992.

By the time Howe was installed at Highfield Road, Gould had been in situ at The Hawthorns for almost a year, having become The Baggies boss in February 1991. 16th in the second division when Bobby took over Albion slumped to relegation despite being undefeated in their last nine games. The problem was only two of those were won – the last of those at his old club Bristol Rovers, where victory would have saved his side.

Aiming to bounce straight back up Albion hit Exeter for six on the opening day of what would be Bobby’s only full season in charge. For spells in the autumn Albion topped the table and did again at the end of the year after again beating Exeter. After a splendid 3-0 win at Birmingham City in early February again took them to the top Albion imploded, dropping as low as 10th. Even a late rally left them one place away from the Play-offs and Bobby departed three days after the curtain came down on West Brom’s season. 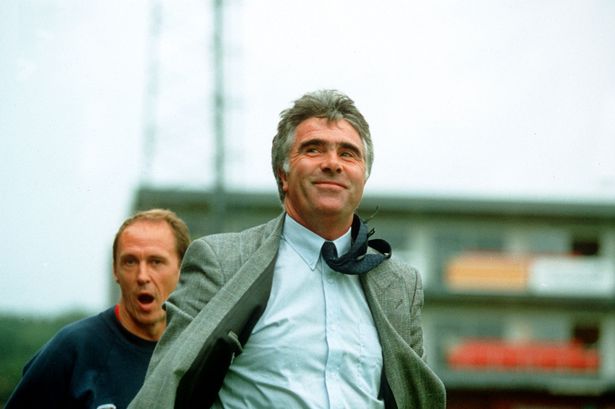 Coventry meanwhile had just staved off relegation from the top-flight and the month after leaving The Hawthorns Bobby was back at Highfield Road, being installed on 24 June 1992.  He was back with a bang! Winning six of the first eight games Gould had City second in the first season of the Premier League! Indeed, only two of the opening dozen games were lost but the last four of those were draws in a draw laden run of 11 games without a win. Rather like his relegation season at WBA draw after draw was dragging Gould’s side down over a period of time.

Perhaps by chance or perhaps by a more adventurous approach in the light of the outcome of those West Brom stalemates City suddenly broke out of a spell of eight draws from 11. In contrast only four of the next 22 games ended all square. The turning point was a sensational 5-1 victory over Liverpool and a 3-0 win over Villa either side of Christmas. Two days later there anyone getting carried away was brought back to earth with a 5-0 loss at Old Trafford, but soon Coventry were winning 5-2 away to Blackburn and after another win at Middlesbrough sat in fourth place in the table in February as Europe beckoned.

If only the season had ended there and then. Instead City scored just once in their next seven games, not helped by the sale of regular striker Robert Rosario to Forest, albeit Rosario had only got on the score-sheet four times himself. Winning only one of their last 11 games the Sky Blues fell to their lowest point of the season – 15th – as the season ended.

Although only three points from the drop in the final analysis, City had never been in danger of the drop and Bobby prepared for another season in charge of his boyhood club. That 1993-94 season began like a dream, a Micky Quinn hat-trick at Highbury producing a 3-0 won over Arsenal. It kicked off an eight game run at the start of the season which at one point propelled City to third place, although once again draws were mainly the name of the game. 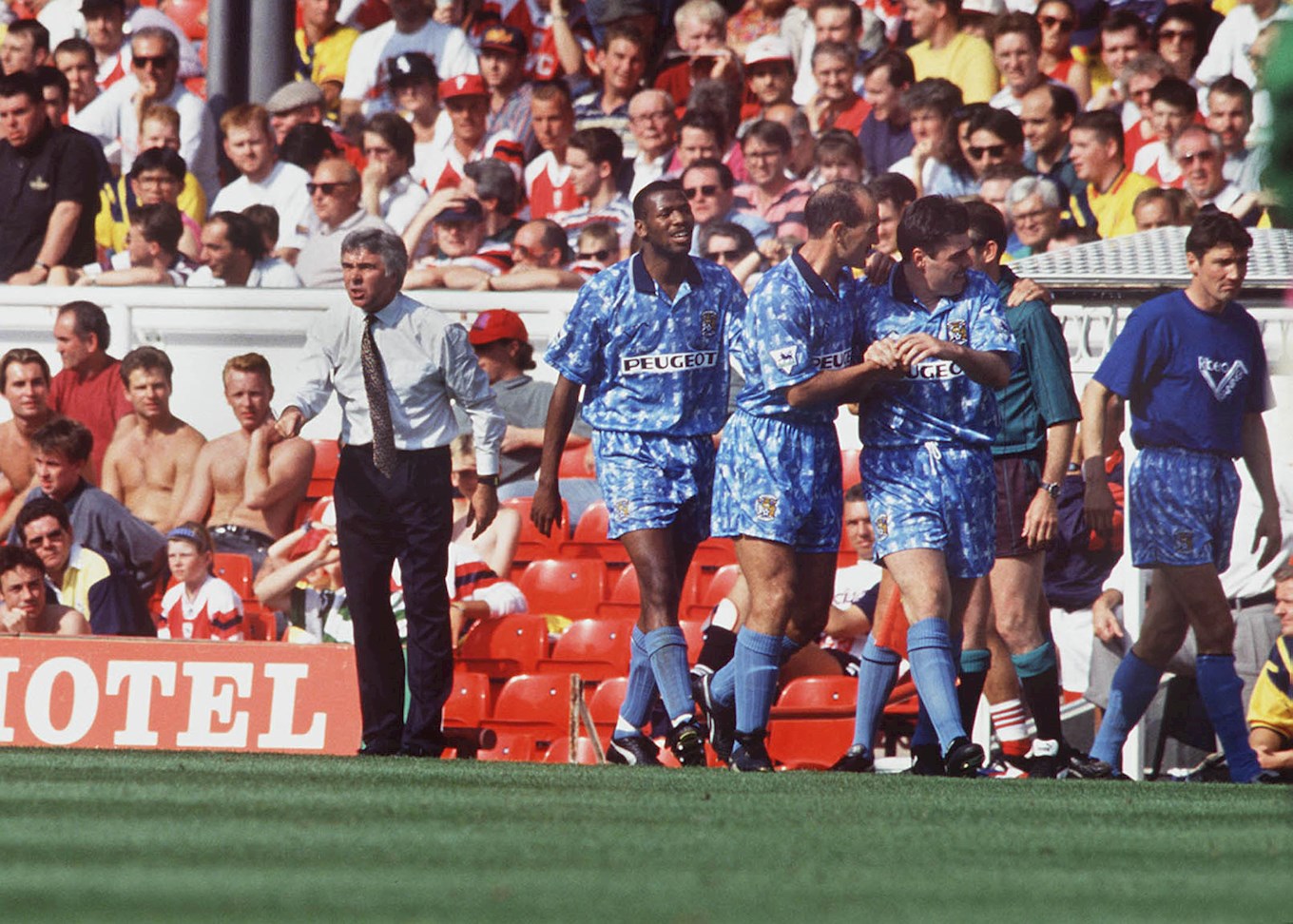 With Les Ferdinand in fine form QPR were going well when The Sky Blues visited them on 23 October 1993. Under 10,000 had watched the previous week’s home draw with Southampton, a fifth game without a win. 3-0 down at half time, City lost 5-1 prompting Bobby to resign. The club were 13th and it was a sad end to Gould’s time in charge, coming a week short of thirty years after his debut as a fresh faced youngster living the dream of lining up for his local heroes.

Out of management for over a year Gould re-surfaced in 1995 in international football as manager of Wales. Perhaps not surprisingly, given Vinnie Jones was called up for the Wales squad while Bobby risked controversy by bringing the international career of Ian Rush to an end, Wales took on an element of the Crazy Gang, not least when Bobby reportedly challenged frustrated young forward John Hartson to a fight and took the team training in a prison! 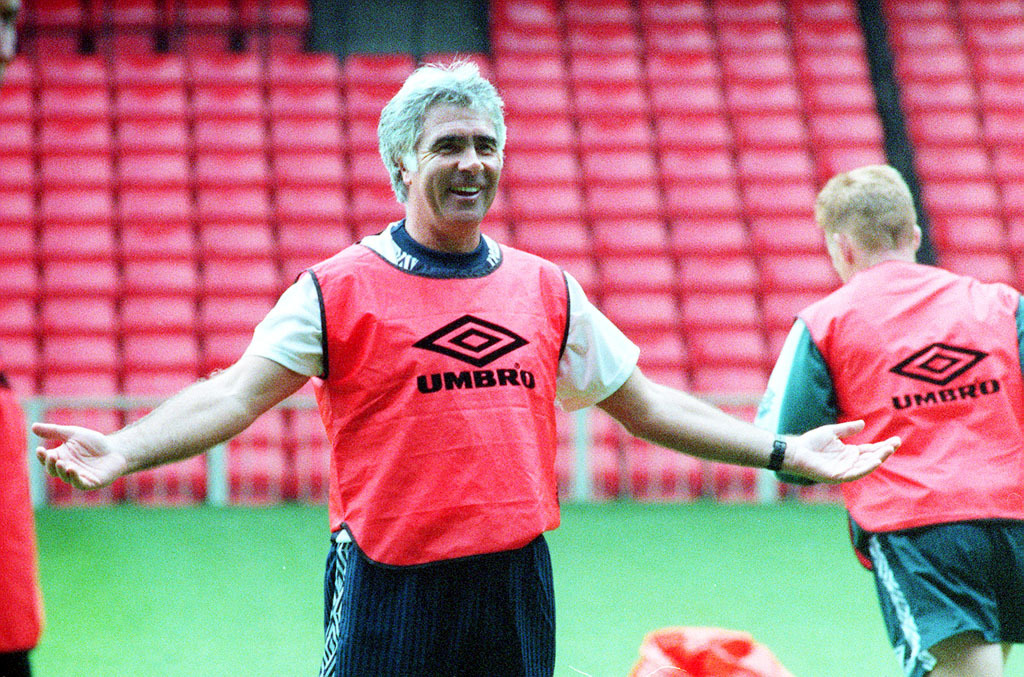 In four years in charge Gould enjoyed some big wins, especially over Denmark and Belarus but, rather like his departure from Coventry, resigned immediately after a big defeat, in this case a 4-0 reverse to Italy.

Bobby stayed in Wales for his next job, taking charge of Cardiff City for the 2000-01 season under the chairmanship of Sam Hammam who he had worked with at Wimbledon. The Bluebirds would win promotion from the third tier but by October Gould had relinquished control of the first team to Alan Cork while he focussed on re-structuring the club from top to bottom.

Like an addict unable to kick a habit, Bobby was lured back into management with Cheltenham in January 2003 but already in relegation trouble The Robins were relegated and by November Bobby resigned. Five and a half years later he re-appeared yet again, this time at Weymouth. It was the sort of challenge only someone as in love with the game as Gould would take on. Just relegated from the Conference the club were in turmoil and suffered a second successive relegation before Bobby left at the end of the season. 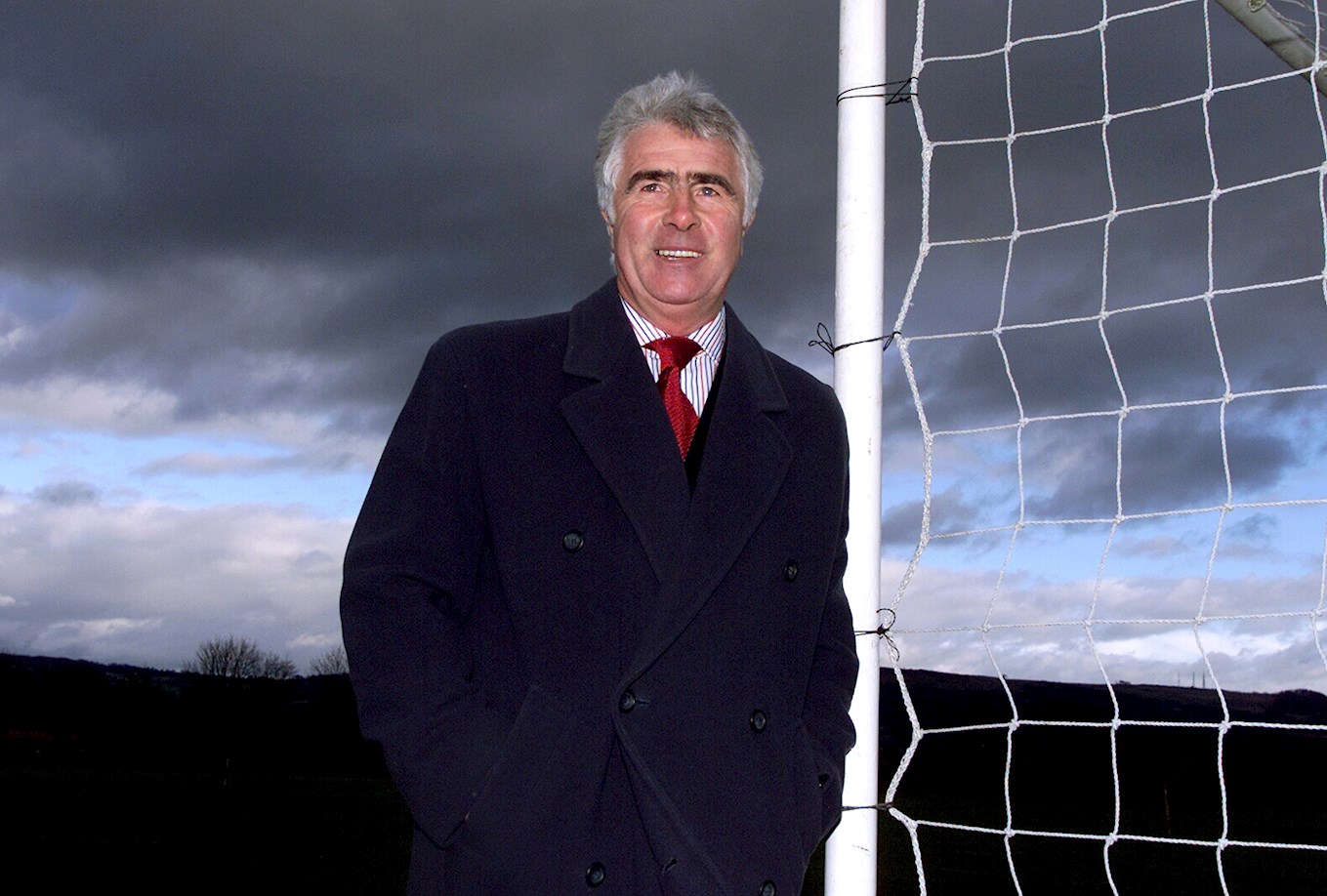 Well-travelled as a manager Bobby’s managerial career mirrored his playing days where after starting at Coventry he never stayed longer than two seasons at any of his ten other clubs, playing for Arsenal (for whom he scored in the 1969 League Cup final), Wolves (where he had two spells), WBA, both Bristol clubs, West Ham, Hereford, Wimbledon and Aldershot, totalling 160 goals in 440 league games, 40 of those goals coming at almost one every two appearances for Coventry City. 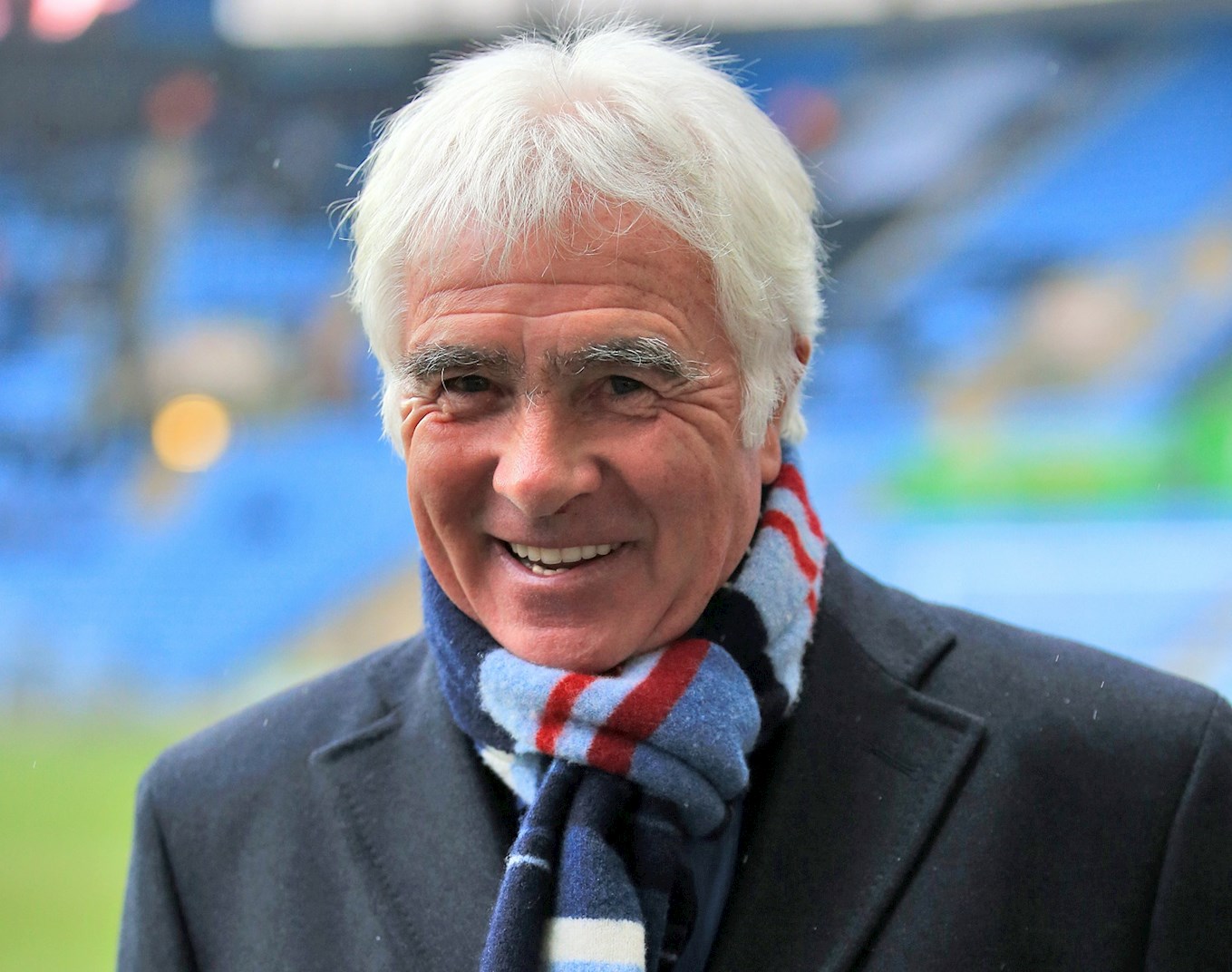