Coventry City have confirmed ticket prices for the 2018/19 season and even after promotion to League One, the Sky Blues have FROZEN the price of match tickets!

Prices adhere to the same structure used for Season Tickets, with only Standard Zone and Premium Zone pricing areas available.

Fans save money on their Match Tickets by purchasing in advance of matchday – except for JSBs, who do not have a matchday increase. JSB Under 13s can get a free ticket to any league game when accompanied by a paying adult, while JSB Under 16s tickets are just £5. 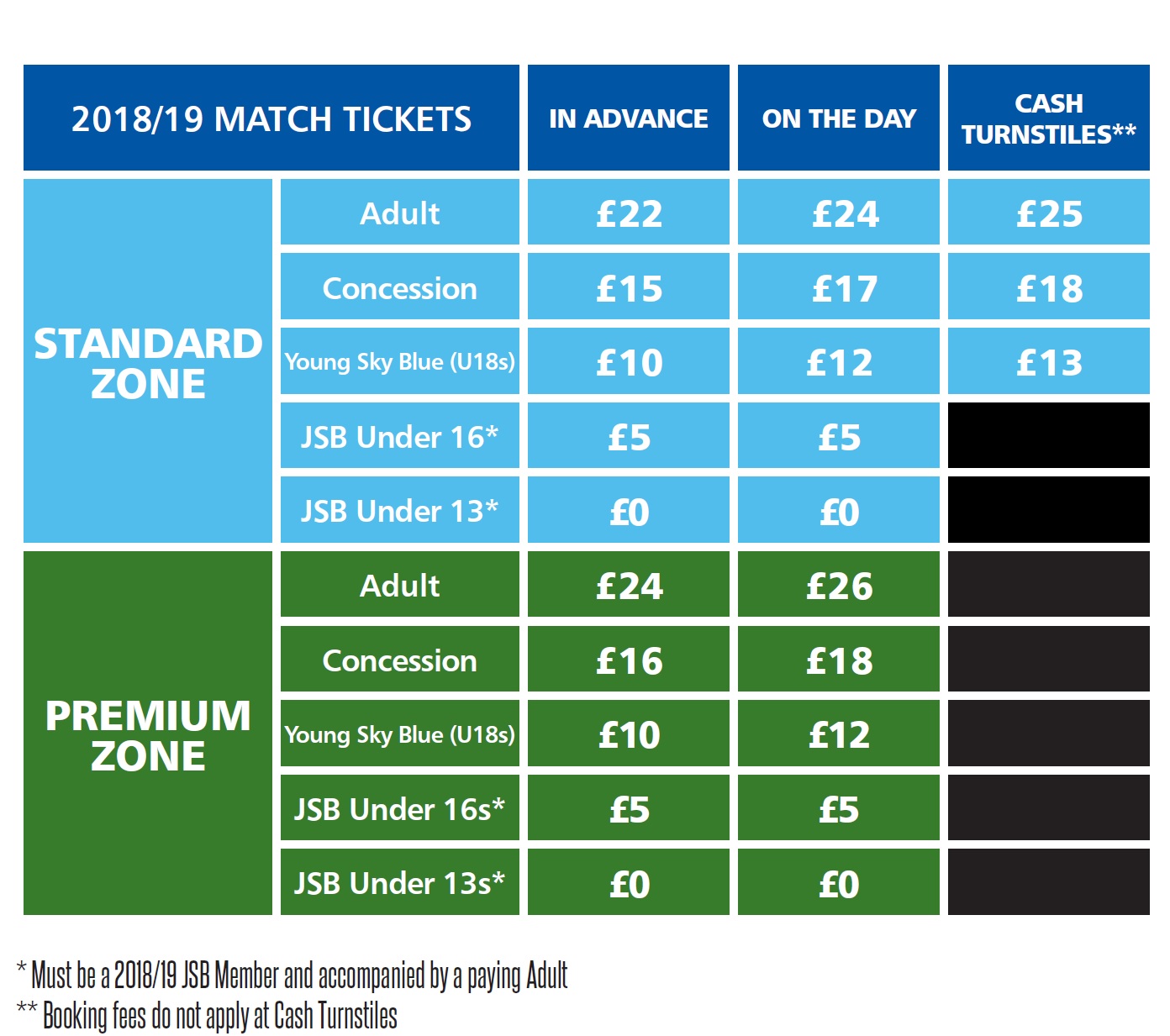 The Concession category includes all students (with valid NUS card), alongside Seniors (60+), Young Adults (21 and Under) and members of the Armed Forces.

Matchday tickets for the first two home league games (vs Scunthorpe and Plymouth) will be available to purchase from Monday 16th July at 9am, with subsequent games on sale from 9am on Wednesday 18th July.

Remember, despite match tickets being frozen, buying a Coventry City Season Ticket will give you the best value option per game to watch the Sky Blues live in action at the Ricoh Arena next season for all 23 home league games!

Or if you can’t commit to all games – you can still save money with a Match Package!

There will be a £1 processing fee for all match tickets purchased in advance or on matchday, except for cash turnstiles where this is included in the price. A £1 fulfilment charge (postage and packaging) will apply when tickets are bought over the phone or online when not using print at home.

Match tickets will not be available in Blocks 14, 15 and 16 – making these areas Season Ticket holders only.

In a follow up meeting, numerous options were discussed to address this issue. One of which was closing Block 14, which is not something which any party wants to do as this is an area which can generate a brilliant atmosphere on matchdays.

It was agreed that the most favourable option would be not to sell any Match by Match tickets in Blocks 14, 15 & 16, and the club also agreed not to sell any further Season Tickets in these blocks.

The club has also committed to extra stewarding in these areas, with these arrangements set to be reviewed at the end of September.

“We’re pleased to have frozen match ticket prices for our home games this season. The support last season, particularly at the end of the campaign, was fantastic and no doubt helped the team.

“We took a huge number of fans down to Wembley for the Play-Off Final win, and we would all love to see them at the Ricoh Arena this coming season in one form or another – be it Season Ticket, Match Package or buying match-by-match.

“While Season Tickets and Match Packages will give fans even better value per game, hopefully fans will be pleased with this pricing and will be encouraged to come and support Mark Robins and the team.”

Coventry City Chief Executive Dave Boddy said about the changes in Blocks 14, 15 and 16:

“Following major safety concerns expressed by the Police in the SAG meeting, we have been required to make these changes to address the overcrowding.

“I understand that some supporters who buy in these areas will be upset about this, and for this inconvenience we do apologise, however safety has to be a priority and we hope that this helps to ensure safety for all supporters on matchdays.

“The changes will be monitored closely during the opening months of the season.”