Half Season Tickets for the 2017/18 campaign are still available, as Coventry City look to push for promotion!

The support of each and every Sky Blues supporter will be vital as Mark Robins’ side aims to bounce back to League One at the first attempt, with the team currently in the play-off places of the League Two table.

The Half Season Ticket starts from our game against Chesterfield on 1st January, and includes crucial encounters with promotion rivals Luton Town, Accrington Stanley, Swindon Town and Lincoln City.

A Half Season Ticket is the best value way to watch the Sky Blues in the final 11 matches of the season. Compared to purchasing at cash turnstiles, adult fans in the Standard Zone are saving £10 each game* – or £110 through the entirety of the Half Season Ticket!

Manager Mark Robins said: ““The support of our fans is vital and we’re all grateful to everyone who purchases their Season Tickets and match day tickets.

“The Half Season Tickets offer great value for fans, with the adult equivalent price of only £15 per game for the final 11 games of the season and JSB under 13s still free anywhere in the stadium. There are also other benefits for fans of becoming a Season Ticket holder, such as getting ticket priority on away, cup and any play-off matches, and we hope fans take advantage of this offer and be part of an exciting end to the season.” 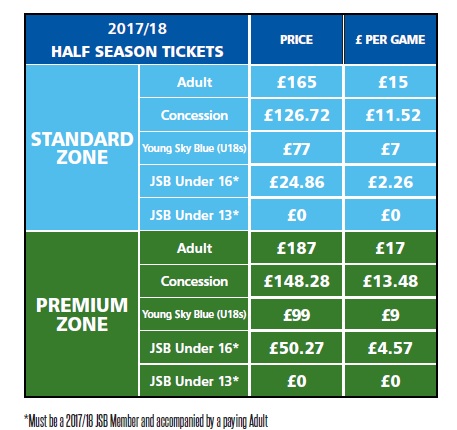 - Online at eticketing.co.uk/ccfc – This is the quickest and easiest way to purchase

- In person at the Butts Park Arena Ticket Office, during regular opening hours.

* Based on Cash Turnstile price of £25